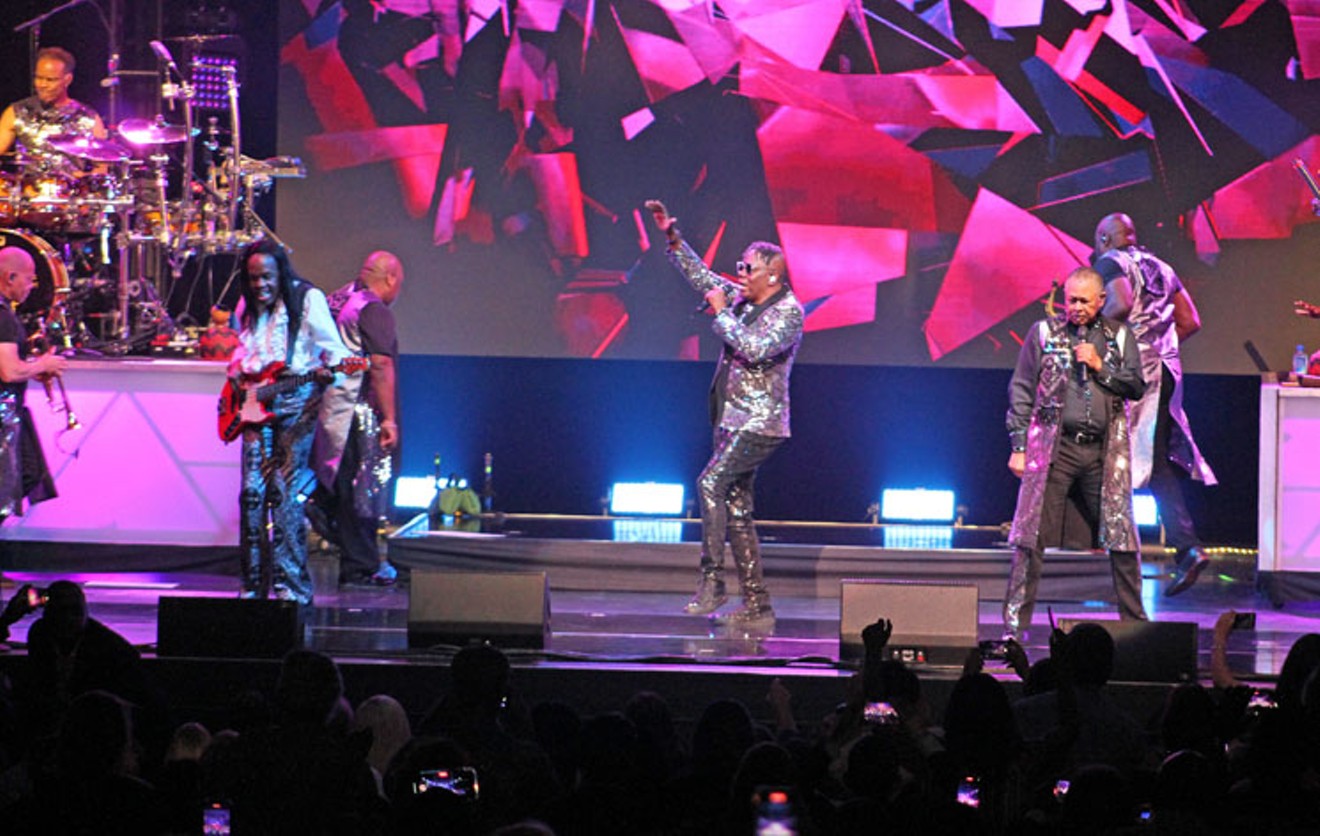 Earth, Wind and Fire onstage at the Smart Financial Centre in Sugar Land. Photo by Bob Ruggiero
From the mid-‘70s through the early ‘80s, a certain type of musical collective really flourished on stage and across many different chart genres.

These were, multi-membered ensembles who mashed funk, R&B, soul, disco, and even a hint of jazz and rock into one pot. With horns. And smoke bombs, lasers, and stage sets of vaguely Egyptian/African/Outer-space themes. All while sporting stage costumes with bright colors, spangles and very big sleeves. 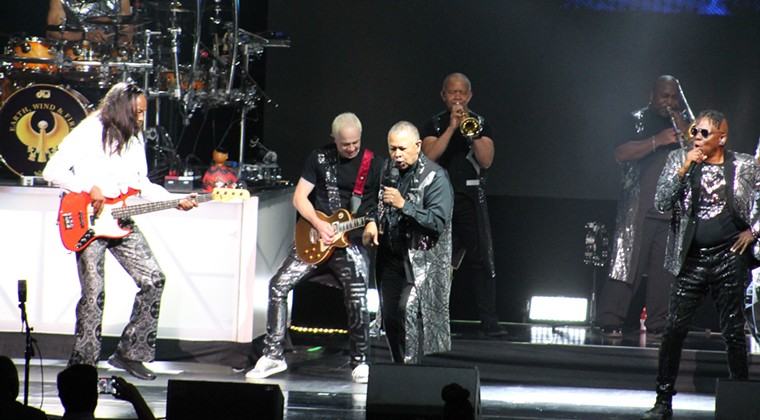 Earth, Wind and Fire have three classic members with Verdine White (on bass), Ralph Johnson (center, singing) and Philip Bailey (right, singing).
Photo by Bob Ruggiero
These were bands like Parliament-Funkadelic, the Ohio Players, the Commodores, B.T. Express, Kool & the Gang, and the Gap Band. But the most successful in that heyday—and still able to draw the biggest crowds in 2022—is arguably that elemental ensemble of Earth, Wind and Fire.

Whether their wildly energetic and elaborate stage shows, songs of deep thought/deep love/mysticism/social issues, to the yin-yang of co-lead vocalists Maurice White and Philip Bailey, EWF certainly made an impression. 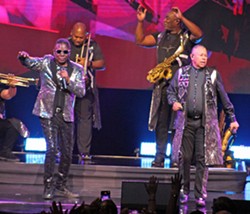 Philip Bailey and Ralph Johnson (front).
Photo by Bob Ruggiero
And while the Egyptian robes and Sphinxes have long ago given way to spangly black-and-silver outfits and a video projection screen, Earth, Wind and Fire could still move mountains with their music. As they proved for an hour and 40 minutes Wednesday night with more than 25 tunes from across their catalog.

Wikipedia lists more than 45 current or former members of Earth, Wind and Fire. Of course, band founder, leader, singer, producer and chief co-songwriter Maurice White died in 2016 at the age of 74 of Parkinson’s Disease (and by that time had already stopped performing with the group).

The trio of original and/or classic members with EWF during their commercial heyday still in the band at the Sugar Land performance include the falsetto-toting Philip Bailey (vocals/percussion), Maurice’s brother Verdine White (bass) and Ralph Johnson (drums/vocals). 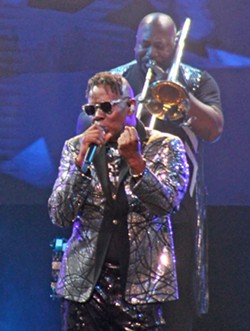 Philip Bailey
Photo by Bob Ruggiero
Of the band’s many hits, highlights included powerful, party-mood-setting opener “Shining Star,” the slinky “Serpentine Fire,” nearly-spiritual “After the Love Has Gone,” and a one-two punch of “Fantasy” and “Boogie Wonderland.”

But this show was different in that there were just as many (if not more) amazing performances of “deep cuts.” Those included the uplifting “Mighty Mighty/Celebrate” and “Kalimba Story/Sing a Message to You” (with Bailey expertly plucking the tiny titular instrument). Also the going-to-church vibe of “Devotion,” romantic notions of “Can’t Hide Love > Love’s Holiday” (amazing showcases for Whitworth), and closer “In the Stone.”

In fact, lyrics from that last tune—“Deep inside your heart for you to keep/Lies a spark of light that never sleeps/The greatest love you ever known/Love is, love is written in the stone”—certainly strike a chord now, as they did in upon its 1979 release.

The band even paid tribute to jazz pianist/composer Ramsey Lewis, who passed away just a few days ago at the age of 87. Lewis was a friend and mentor to the band, and one of Maurice White’s earliest gigs was serving as Lewis’ drummer.

In his spare time with Lewis, White built the temple (and template) of what would become Earth, Wind and Fire. Last night, EWF played Lewis’ almost entirely instrumental “Sun Goddess” (with an animation of Lewis’ original album cover on the screen behind them). That segued into a call-and-response on Lewis’ biggest commercial hit, “The ‘In’ Crowd,” with Bailey happily filming both audience and band and McKinley taking the lead on keys. 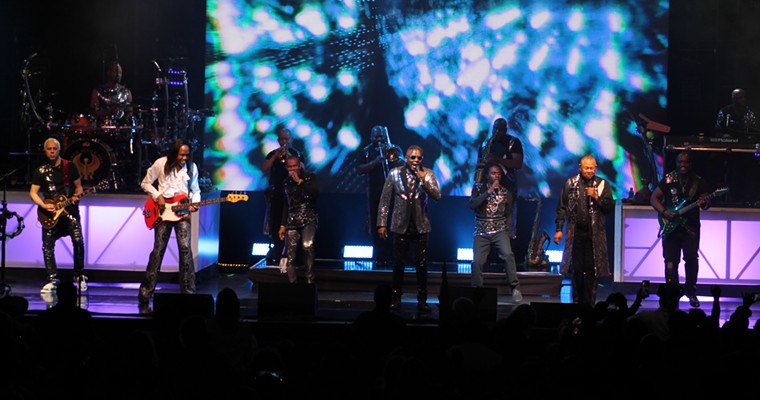 There's a lot of dudes onstage at an Earth, Wind and Fire show.
Photo by Bob Ruggiero
Bailey—at 71 years of age—still possesses a masterful instrument, hitting most of the impossibly piercing high notes with a sweet vigor. The energetic Whitworth was a revelation on some of the tunes originally sung by Maurice White, and the constant showman Verdine White laid down many mighty, mighty thick grooves. And O’Connor and Dimitrijevic stepped forward occasionally to deliver solid stinging solos.

But there was truly not a weak link in the band, which showed what a true ensemble plays like together, as opposed to a collection of musicians. An agile Whitworth and Bailey, Jr. also added some fantastical dance moves (including from the former, a few familiar to players of the video game Fortnite). Others joined in for synchronized movement which seemed far more natural and less practiced than it could have been. 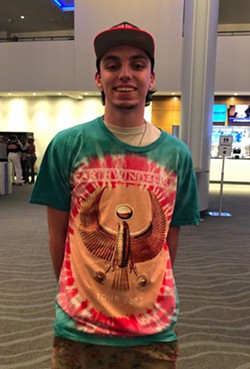 Vincent Ruggiero scores some merch.
Photo by Bob Ruggiero
Overall, Earth, Wind and Fire put on one of the most fun, positive, musically-engaging, and joyful shows I’ve seen in many years.

The only that could have made the stars align even more is if the show were exactly a week from last night. That way, when they sang “Do you remember, the 21st of September?” at the start of perhaps their biggest hit (saved for near the end), even those with short term memory loss could yell “Yeeeaahhhh!”

Houston...We Had a Problem
This was actually EWF's third scheduled, but first successful show in the Houston area. They were originally slated to play in November 2021 on the second day of Travis Scott's ill-fated Astroworld Festival, but didn't for obvious reasons. Then they were supposed to open for Santana this past July at the Woodlands, but that show was called off after Carlos Santana had a health scare onstage and cancelled his next six shows—of which Houston was the last. But they finally made it!

The Crowd
One of the most multi-racial audiences I’ve ever seen. Thirty to sixtysomethings with good seat and stand-up dancing grooves. Thankfully, less iPhone camera wielding than the average show.

For Further Reading
Maurice White’s posthumously-published autobiography My Life with Earth, Wind and Fire is the most complete (if subjective) to date look at the band’s formation and career. He was definitely a versatile cat, with interests in mysticism, spirituality, the history of ancient cultures, ecology, vegetarianism, and, uh, women. Lots of women. Philip Bailey’s Shining Star is also a good read.

Blast from the Past
Earth, Wind and Fire were one of two acts—along with Aerosmith—to actually improve upon a Beatles song in the Bee Gees/Peter Frampton film vehicle Sgt. Pepper’s Lonely Hearts Club Band with their cover of “Got to Get You Into My Life.” Bonus trivia! Beatle Paul McCartney wrote it not about a woman, but about his…newfound love of marijuana.

Random Notebook Dump
This is the third recent show where the merch booth was sold out of L or XL sizes of the T-shirt I wanted, and early in the evening. Why don’t groups carry more of these two sizes?? Such a lost stream of revenue.

Setlist
Shining Star
Let Your Feelings Show
Mighty > Celebrate
Getaway
Saturday Nite
On Your Face
Serpentine Fire > Verdine White Bass Solo
Sing a Song
Got to Get You Into My Life
Kalimba Story/Sing a Message to You
Departure
Keep Your Head to the Sky
Devotion
Can't Hide Love > Love’s Holiday
Reasons
That's the Way of the World
After the Love Has Gone
Sun Goddess > The “In” Crowd
Fantasy
Boogie Wonderland
Let's Groove
September
In the Stone
KEEP THE HOUSTON PRESS FREE... Since we started the Houston Press, it has been defined as the free, independent voice of Houston, and we'd like to keep it that way. With local media under siege, it's more important than ever for us to rally support behind funding our local journalism. You can help by participating in our "I Support" program, allowing us to keep offering readers access to our incisive coverage of local news, food and culture with no paywalls.
Make a one-time donation today for as little as $1.