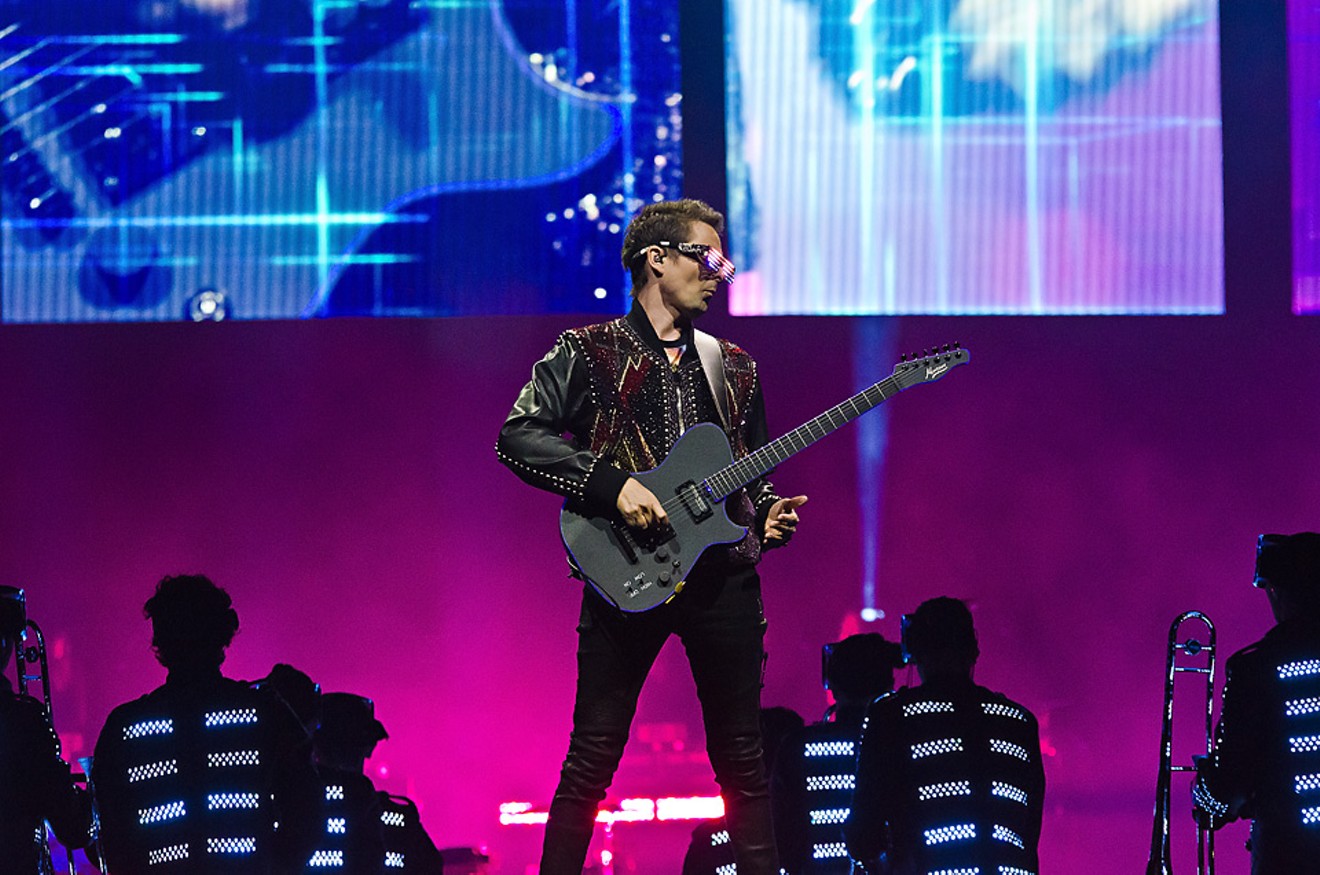 Toward the end of a monstrous, nearly two-hour, career-spanning rock spectacle, Muse brought out a special guest: a floor-to-ceiling sized inflatable, animatronic RoboCop meets Terminator robot. As the trio plowed through a frenzied "Stockholm Syndrome," the cyborg loomed overhead with an arm reaching over the stage like it were the star of a 3-D film, simultaneously lunging out of the screen and vying for a spot in next year's Macy's Thanksgiving Day Parade. While it was the most grandiose moment of an already theatrical night, it was hardly an isolated incident.

Last night, Muse launched their insanely colorful, futuristic Simulation Theory World Tour at Toyota Center. A visual and musical feast, the tour finds the band yet again pushing their stage production to greater heights while seamlessly integrating their supporting album's '80s sci-fi cinema vibe with the remainder of their mammoth catalog. Before they took the stage, themes from Stranger Things, Miami Vice, and Midnight Express prepped the audience's palette for the night's synthesized aura. 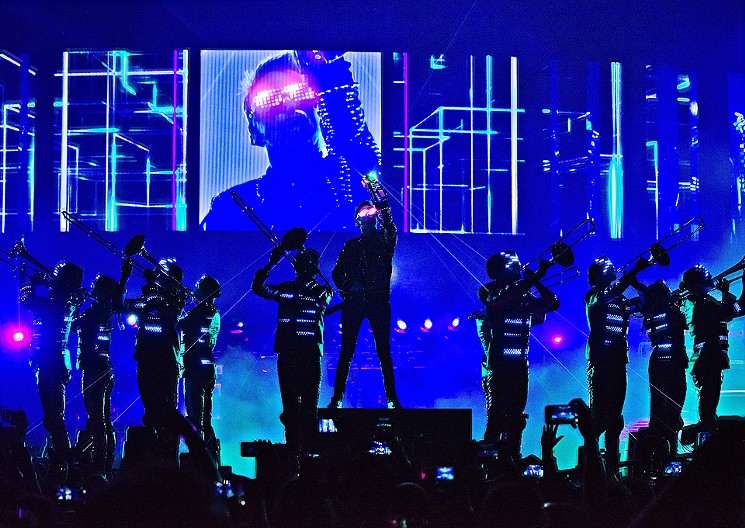 Muse brought their latest larger-than-life stage production to Toyota Center last night.
Photo by Christi Vest
Though the opening night of a major tour can sometimes be a tepid affair, the trio showed no apprehension stepping into their natural, or simulated, habitat onstage. Backed by an army of dancers doubling as a marching band, Muse blazed through a focused, fast paced opening segment of Simulation Theory cuts "Algorithm" and "Pressure" before scoring a thunderous approval of 2015's "Psycho." Lead singer Matt Bellamy's glasses lit up in time to the music. The frets on Chris Wolstenholme's bass guitar lit up and changed colors throughout the night. Drummer Dominic Howard bulldozed his way through each song while effortlessly delivering each drum fill as if he knew exactly where it would land in the arena.

With Bellamy handing the mike over to the crowd for an entire chorus, The Resistance staple "Uprising" incited a sea of fist pumps along with one of the evening's most colossal, irresistible sing-a-longs. In fine vocal form, Bellamy's operatic falsetto morphed with a distorted guitar solo during "Plug In Baby." After an extended intro, the band triumphantly landed on "Supermassive Black Hole,"  blending urgency and precision to reveal the symbiotic relationship between their musical performance and stage production. The band played into the show; the show, into the band.

Muse at Toyota Center.
Photo by Christi Vest
They took to the B Stage for an acoustic, gospel take of "Dig Down," a gem from the Super Deluxe edition of their latest album. As they sang to the crowd "Dig down and find faith," the audience found their cellphones in the process, turning the Toyota Center into a flashlight galaxy while dancers in transparent raincoats hovered above the main stage.

"Madness" found Bellamy sporting LED glasses, strategically projecting the lyrics from the lenses to induce another singalong that their music so readily invites. Bellamy delivered a relaxed mid-song solo with maturity, emotional acceptance, and room to grow. As the tour progresses, the guitar solo here could swell to higher rafters than that giant RoboCop balloon.

After a night of scarce stage banter and little acknowledgement of the tour's opening performance, the band closed the night with a meteoric, victory lap performance of "Knights of Cydonia," complete with an introductory harmonica solo from Wolstenholme. Fans chanted "You and I must fight for our rights / You and I must fight to survive" with so much determination, it's hard to imagine any Muse set without the epic fight song, or any arena without the song. To experience it live in concert is to ask: Which came first, the arena or Muse?
KEEP THE HOUSTON PRESS FREE... Since we started the Houston Press, it has been defined as the free, independent voice of Houston, and we'd like to keep it that way. With local media under siege, it's more important than ever for us to rally support behind funding our local journalism. You can help by participating in our "I Support" program, allowing us to keep offering readers access to our incisive coverage of local news, food and culture with no paywalls.
Make a one-time donation today for as little as $1.