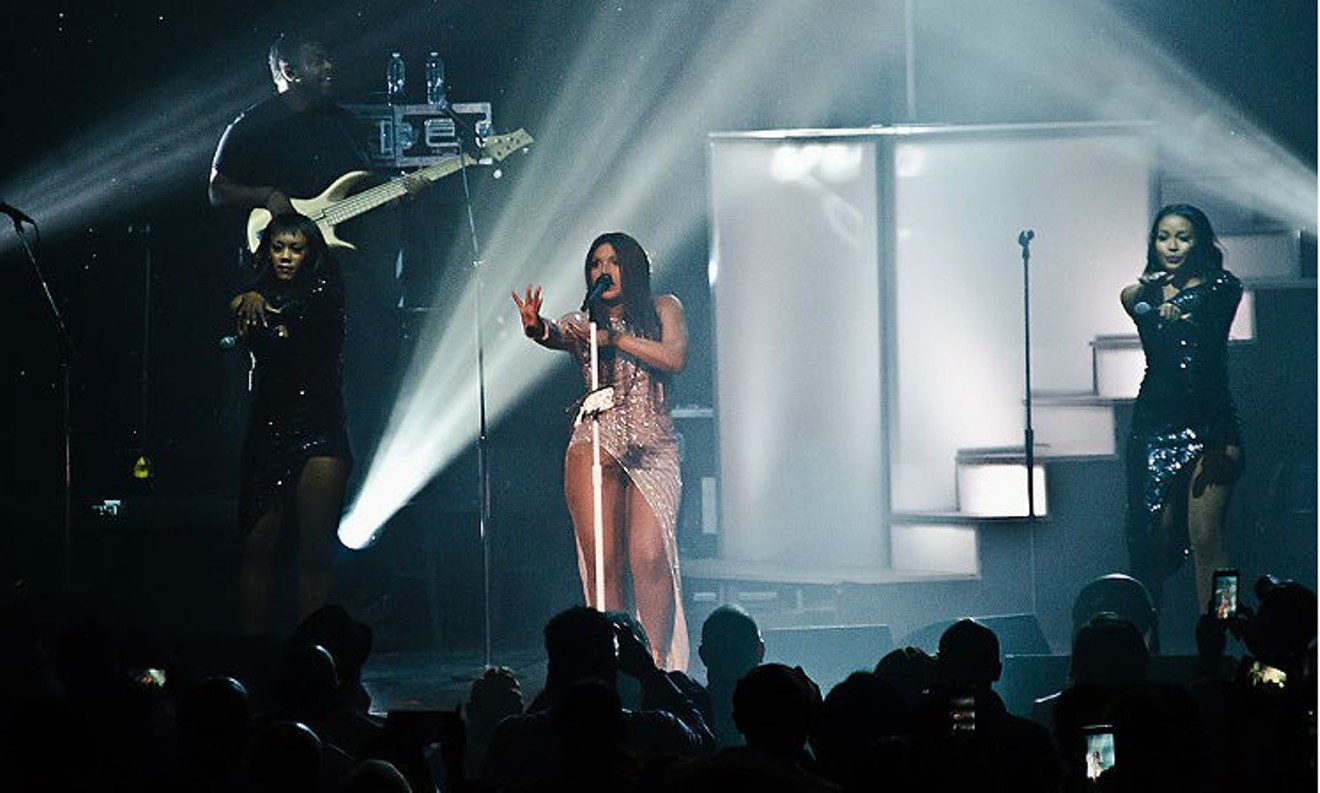 Toni Braxton at Smart Financial Centre. Photo by Christi Vest
Toni Braxton live in concert in 2019 is something of a dichotomy. On one hand, there’s a world class, multi-platinum recording superstar she identifies as; on the other, a scattered, ridiculously candid reality television star. There is a catalog of classic ‘90s R&B hits stricken with heartbreak coupled with a seasoned entertainer who can’t help but laugh her way through them. Then there’s that voice. And that song.

After rising to the top of a center stage platform, chin up with arms outstretched, Toni Braxton’s unmistakable husky croak treated the Smart Financial Centre to a sizzling, all-business take of her 2000 hit “He Wasn’t Man Enough.” Backed by a four-piece band, Braxton and her two background vocalists even took to a mid-song dance break. She completed the customary concert opening one-two punch with “How Many Ways,” greeting the audience, promising them a good time.  It was a solid start to what quickly developed into an episodic night.

During “Just Be a Man About It,” Braxton finger-waved her way through one of her (oh so many) signature, melismatic vocal runs. Calling it idiosyncratic might be an understatement; still, her ubiquitous vocal zig zagging was a spectacle unto itself.

Just a few songs later, Braxton deviated from an acoustic take of her 2012 single “I Heart You,” to call out any birthdays, engagements, and anniversaries in the house. The entire affair was about two steps and a hop away from becoming a full-fledged Q&A before Braxton launched into a, ahem, stirring rendition of “Happy Birthday,” complete with vocal riffs and a generously accommodating pianist behind her. It might not have been the song people came to hear.

Any traces of a caricature faded away when she stepped into material from her recent Grammy-nominated album Sex & Cigarettes. Committed to coloring the songs with her resonant, bronzed alto, Braxton offered her most focused vocals of the night with “Deadwood” and “FOH.”

Inching closer to the night's end, her set found a new stride. “Another Sad Love Song,” brought the crowd back to its feet. Braxton foxed and prowled her way through “Breathe Again,” sauntering the aisles and taking selfies with fans. That one song couldn’t be far off at this point.

It’s hard to imagine any veteran artist without a lightning-in-a-bottle mega-hit embedded in its audience’s DNA. “Un-break My Heart” happens to be an impassioned thunderstorm. When she delivered an under-tempo arrangement in a lower key than the original with startlingly sparse instrumentation – seated on a cushion on the stage floor – much like the song’s lost lover, it left more questions than answers.

When did Smart Financial Centre become a karaoke bar? Why is she laughing in the middle of the first verse?Who is this bald guy taking a selfie with Toni Braxton? Where is the high note?

The high note may have walked out the door and walked out of Braxton’s life, but when the houselights came up, the all-forgiving fans walked out their own doors, taking back that sad word goodbye.