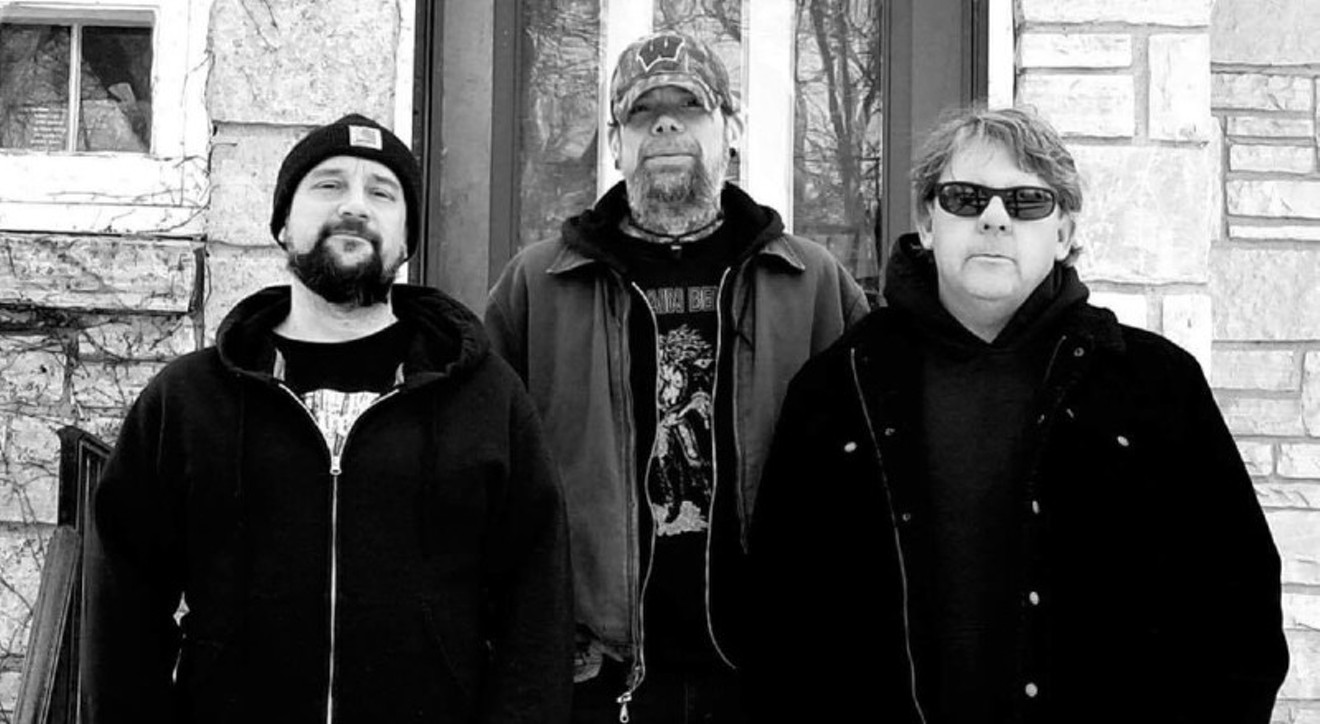 When it comes to selecting a weed-centric song of particular brilliance, few people are as qualified as Mike “Muleboy” Makela to offer a primo selection. Makela is the frontman for Bongzilla, the legendary Wisconsin stoner metal band. Their albums, with titles like Gateway and Amerijuanican, have exalted on high the stickiest of the icky since the band’s formation in the mid-1990s. It’s been 16 years since Bongzilla’s last release of original material, but a new album, dubbed Weedsconsin, is set to drop on 4/20.

Makela discussed the new album, America's changing weed culture and one epic marijuana song in a recent phone interview, a discussion punctuated by frequent bong hits. Makela admitted the new music might never have happened if not for the unusual global events of 2020.

“I don’t think we’d have a record if it wasn’t for COVID,” he shared. “I guess the blessing out of COVID was two of us weren’t working at all, so we were jamming a ton and then Jeff, our guitar player, who was actually working a ton because he’s a truck driver, would come every spare moment he had. We’d almost kind of trap ourselves like the Allman Brothers but instead of mushrooms we were just smoking a ton of weed. Stuff just started falling out then.”

“There’s so much more room in a three-piece than a four-piece. Going off into what I call the ‘stonosphere,’ I think there’s plenty of room,” he said.

The new disc includes the track “Mags Bags,” which features a drum solo by Mike Magma that’s been years in the making, according to Makela.  He generously puff-puff-passed compliments on his bandmates and their work on Weedsconsin.

“What really excites me is we’ve freed up Spanky. He’s never ripped solos like he does on this record. Now everybody gets to see what I’ve known for a long time, that he’s an incredible guitar player.”

If the band’s lineup or sound has changed a little over time, the subject matter decidedly has not. In some ways, the times have finally caught up to Bongzilla. Why did they choose to marry music and marijuana in the first place?

“That was me,” Makela said. “I don’t know if it was on purpose initially but definitely I wanted to sing about weed. In Wisconsin, alcohol culture is just insane. Literally, one of the only places in the world where you can bring your kids to the bar and it’s okay and acceptable, like it’s actually a ritual for people to bring their babies to the bar they hang out in and take photos. It’s a whole thing.

“I can walk around and be drunk as a skunk in Wisconsin, get five DUIs and nobody blinks, but I couldn’t walk around and smoke weed,” he continued. “It was a thing that was making me kind of pissed off as a pretty big stoner even back then, like what the fuck, this is stupid. Our government and the world legalized the one drug in the world that you 100 percent can die from withdrawal. If you’re drinking a fifth or a liter of whiskey a day and you try to quit the next day, you will die.” Besides that, writing songs that centered on weed came natural to Makela. He believes the music is channeled by marijuana and every song is rooted in experience. He said he’s smoked, grown and dealt weed, so there’s lots of source material. Take “Space Rock,” for instance, a new song about Makela and friends creating their own moon rocks. For the uninitiated, moon rocks are cannabis nugs dipped in oil and rolled in kief.

“But you need a lot of oil to do it and we didn’t have a lot of oil,” he said. The song details how they Frankensteined their own moon rocks using shatter. Very dedicated.

“This is easy for me,” Makela said. “I’m just telling stories.”

One story he’s following is America's shifting weed culture. He’s waiting for the changes to come to Wisconsin.

“Most of the state, you’ll go to jail if you’re holding, even like three grams in much of the state, but in Madison it’s very decriminalized,” he said. “You can smoke on private property. I can be walking around the city and have just under a quarter pound, 112 grams on me, they would consider that personal use. Madison’s always been a marijuana town. It’s got one of the longest running marijuana festivals in the country, it’s called Harvest Fest, it’s at the end of every October.”

He believes legalized marijuana can help the reeling live music industry. Makela and his bandmates are working musicians who’ve faced the challenges of such a career and that steeled them for the difficulties of the pandemic, he said.

“I mean, you’re talking about people living much of their lives paycheck to paycheck and down is up for us sometimes. Being on the road broke, you’re in Houston and you’ve never played there – that’s actually awesome for me. I know I’m gonna walk away and everything is gonna be fine no matter what.


“You know, you go to other countries and cities give clubs money to stay open. Are there going to be clubs here when it opens up?” he wondered, and noted that Bongzilla hopes to play live shows again this fall. “I know the bigger guys have gotten money but what about these little clubs that just went a year without one show?

“Hopefully, all this marijuana money, they’ll stick some in the arts,” he said. “The places it’s legal (has) better schools and – I’m digressing, I think, or as I like to call it, ‘di-grassing.’

“If you’re in the U.S., vote to smoke and smoke when you vote,” is Makela’s PSA of sorts. “Then it’ll be legal everywhere and then I don’t have to do just a legal state tour.”

He said the acceptance of weed culture has proven great for weed aficionados. He laments that many young smokers have never seen or smoked “dirt weed.”

“Looking back on it, were we really getting high or just cutting off the oxygen to our heads? Compared to what’s going on in America now with extraction and shatter and waxes. Now there’s this stuff called ‘diamonds’ and it’s like 99 (percent pure) and it literally looks like diamonds.”

Releasing Weedsconsin on 4/20 will help both avid smokers and marijuana-be’s celebrate with new music from someone who is 4/20, 24/7, 365.

“It is a holiday in this world. Maybe some 4/20s I’ll smoke a little more if my friends are getting together and going crazy,” he said. “My first step out of bed, 100 percent, I’m going to the table and there’s either a bowl I packed right before bed to make sure that it was ready or there’s something to take a dab hit with and that’s what I’ll do. And then I’ll make some coffee.”


Of all the pot-related songs, which is quintessential? Without hesitation, Makela deemed Sleep’s 1998 weed masterpiece “Dopesmoker” a marijuana song of particular brilliance.

“The record is 63 minutes long and it’s about finding God through marijuana and a riff,” he summated. “It’s off-the-hook good. It’s like desert Star Wars stuff meets fucking Sabbath – it’s way heavier than Sabbath ‘cause it’s one riff but it’s not boring at all. It’s incredible.”

“So, London gets this 63-minute song and they’re like, ‘What the fuck are we supposed to do?’” he laughed. “They recorded two versions, the second version was called ‘Jerusalem.’ And the lyrics were just a hint different and it was only 51 minutes.”

Makela said Bongzilla was set to record with Billy Anderson, the record’s producer and engineer, when a member of the band Buzzoven tuned them onto “Dopesmoker.”

“So, we’re recording this record, we’re staying with our friend from Buzzoven and he’s like, ‘Dude, I know you guys are into Sleep, they just recorded this song.’ We’re like, ‘Cool! Let’s hear this song!’ Sixty-three minutes later, that’s one side of the tape. Then the other side is all these other mixes of it, of London trying to sort it out. They sent it to two or three different people, they had Billy, who recorded it, try to remix it. It was ‘too this’ or ‘too that’ - and definitely too good for London Records.

“One of the versions I think was a three minute and 58 second edit and it’s one riff but it’s a little variation on this riff. It was a radio-edit version but it somehow included all the different parts,” he said. “For sure, because they gave them money, London owned the recordings, but they also somehow owned Sleep’s name for ten years, which is crazy when that shit happens. It’s not crazy that a band would do it, it’s crazy that a record company would do that to a band.”

Mikela said the band was a definite influence on Bongzilla and he advocated for listening to “Dopesmoker” to properly recognize weed’s most notable day on the calendar.

“That was the day that I felt really good about myself, when I was on Spotify and I was a related artist to Sleep,” he said proudly. “You gotta check out that record and if you do smoke, I would smoke a lot before you do. Or, smoke during - that’s what I do.”
KEEP THE HOUSTON PRESS FREE... Since we started the Houston Press, it has been defined as the free, independent voice of Houston, and we'd like to keep it that way. With local media under siege, it's more important than ever for us to rally support behind funding our local journalism. You can help by participating in our "I Support" program, allowing us to keep offering readers access to our incisive coverage of local news, food and culture with no paywalls.
Make a one-time donation today for as little as $1.