Camilo Lara and the Particular Brilliance of Positive Music

Camilo Lara’s music knowledge is encyclopedic, so asking the Grammy-winning artist to choose just one song he finds particularly brilliant was almost unfair. But Lara, the mastermind behind Mexican Institute of Sound, which released its newest album, D.F. (Distrito Federal) on February 5, was game. His selection spoke volumes about his own work.

“I would choose, out of all, I would say ‘Redemption Song’ by Bob Marley. I think on so many levels it touches greatness, from amazing production and an artist that completely changed their style of music and changed a whole country through music through a very beautiful, energetic melody and message. I think I learned a big lesson the few times I’ve been in Jamaica working. I think Rastafarian, and especially artists influenced by Bob Marley, they do the songwriting from a positive angle.

“Once I had a song that started with, ‘No,’ and I remember Toots, from Toots and the Maytals, telling me, ‘Hey, if you want to succeed, try to speak from a positive language. That way, you can be more broad and more intent with your language.' I think ‘Redemption Song’ is a perfect example of that, written from light and not darkness.”

Lara could be describing his own music in Mexican Institute of Sound, which combines traditional Latino rhythms with pulsing electro-dance beats. Those sounds are the foundation for stories of Mexico City’s people, places and politics on D.F. The new album works as a love letter to Lara’s home, but he says its true theme is change.

“Recently, the city changed their name for the fourth time in their history. It’s called ‘CDMX’ and back in the day when I was growing up it was called ‘Distrito Federal’ and I think this album in a way is kind of a tale about change, about how cities change, people change, cities get gentrified. This album could be called ‘Austin’ or ‘Los Angeles’ or ‘Bogotá.’ It’s about how cities are different and how when we were growing up some details that you remember, they’re no longer there, a bunch of great things are better now, but there are some others that just disappear.

“I wanted to kind of portray the Mexico City I like and I remember when I was growing up and discovering the streets and the markets,” he said.

We spoke with Lara just weeks after the swearing in of the new U.S. president and asked him about that particular change and what it might mean to the neighboring countries with a strained relationship.

“I spend a lot of time in L.A. also. Half the time of my life I’m between L.A. and Mexico,” he said. “I’m so glad we’re facing times that are different. I have a lot of hope that these times are going to be better for my communities, for Mexico as neighbors of the U.S. 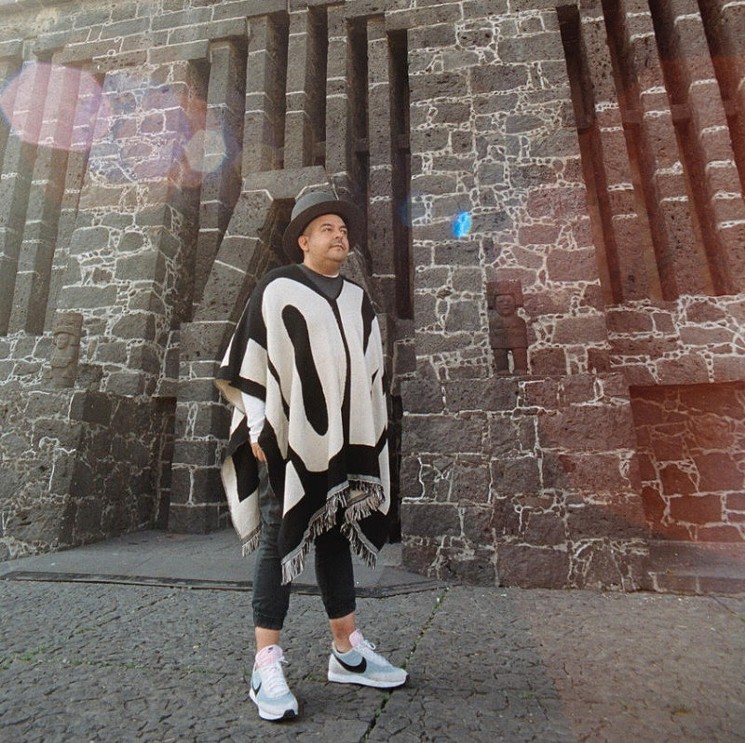 Lara prefers to work from light rather than darkness
Photo by Andres Navarro, courtesy of Rocio Gutierrez PR

“I’ve been thinking a lot about it because my parents, when they were growing up in the ‘60s, they really fought for social things and when they told me those stories when I was growing up, I was like, ‘Well, the world doesn’t need to fight that much.’ I was like ‘Well, it’s interesting that you went to demonstrations and all that stuff.’

“It’s a process. I think social media is not helping, so many things are not helping, to unify. But I think there are good times ahead of us. I always like to think positive and think that we can look for a more decent place where we live.”

That positive outlook and the work it has spurred has made Lara a notable citizen of the world. The Spanish newspaper El País named him one of the “50 Most Influential People in Latin America" and Quién Magazine dubbed him one of the “50 People Who Are Transforming Mexico.” We note that those lists surely included politicians, scientists, educators and the like. Is it odd to find a musician – albeit a very accomplished one – among those ranks, we wondered?

“I do think through music you can make a change,” Lara said. “My favorite artists, they all were political, they have a voice, from Bob Marley to The Clash, people that have an opinion. I think they all fought for the same, basic rights and very simple things. I don’t know, when you’re a kid and you’re listening to that, something sparks in your head through that music."

Lara is a student of music as much as a creator and that deep familiarity has led to some fine collaborations with fellow artists like Band of Horses and Norah Jones. He’s especially steeped in the music of Mexico, though. He’s worked with Lila Downs, one of the country’s best known singer-songwriters. He produced an album for cumbia sonidera giants Los Ángeles Azules which was perched atop the Mexican music charts for more than a year. He was tabbed as a music consultant for Pixar’s Coco. We admit we’re a bit surprised that his song of particular brilliance didn’t hail from Mexico. So, Lara made a second choice for us, a song of particular brilliance with Mexican origins.

“I would say probably ‘Mambo No. 5’ by Perez Prado, even though he’s not Mexican, but he lived here and made history here. I think it is one of those pieces where he invented something. He created a different rhythm, he was a visionary and a punk rocker. I think that ‘Mambo’ is more punk rock than many punk rock songs and has so much energy and so much wildness,” Lara said of Prado, the Mexican composer by way of Cuba who was known as “King of the Mambo” in his 1950s heyday.

“He’s kind of an artist like Prince who can completely change the way to use an orchestra. I’m a big fan of Perez Prado, he was one of our greatest composers and performers of our times.”

Prado’s example may give Lara something to aspire to, but times are different now, things have changed, and not just in D.F./CDMX. Prado, for instance, never had a global pandemic to slow his work. Lara said the new album was slated for release last summer but he held release of D.F. with the hopes that touring might resume in 2020.

“But later in the year I thought, 'You know what? This is the new reality. I don’t think we are going to face the good old times again and whatever is going to happen is going to be different. I’d rather put it out,' so we started releasing songs.”

“I’m not very good at online shows. I’m sure that there are a lot of people that are doing great and I just can’t connect because I like to feel the crowd and be wild and jump and do crazy stuff, so I decided not to do that many (livestreams) and just do a few things. My therapy in these months has been just being at the studio and working with a lot of artists.”

D.F. spotlights some notable guests including Colombia’s La Perla, an all-woman percussion ensemble which combines traditional Latin folk with hip-hop. They're showcased on the latest single, “El Antidoto.” Blur’s Graham Coxon appears on one of the first songs released from the album, “My America Is Not Your America.” It debuted in October, before the administration change in the U.S., and its lyrics address an America that doesn’t let its people down. Because Lara is particularly brilliant at collaborations, we ask him what makes for a good partnership, maybe even rooting around for some advice that might help our bordering countries reconnect.

“I always try to have collaborations either with people that I admire or people that I like personally. I think you either have a connection or an admiration, that’s my only guidance when I do collaborations. I try to keep on collaborating. It’s super important for me just to have moments, time, space just to be human with other humans and create music. That’s fantastic.”
KEEP THE HOUSTON PRESS FREE... Since we started the Houston Press, it has been defined as the free, independent voice of Houston, and we'd like to keep it that way. With local media under siege, it's more important than ever for us to rally support behind funding our local journalism. You can help by participating in our "I Support" program, allowing us to keep offering readers access to our incisive coverage of local news, food and culture with no paywalls.
Make a one-time donation today for as little as $1.