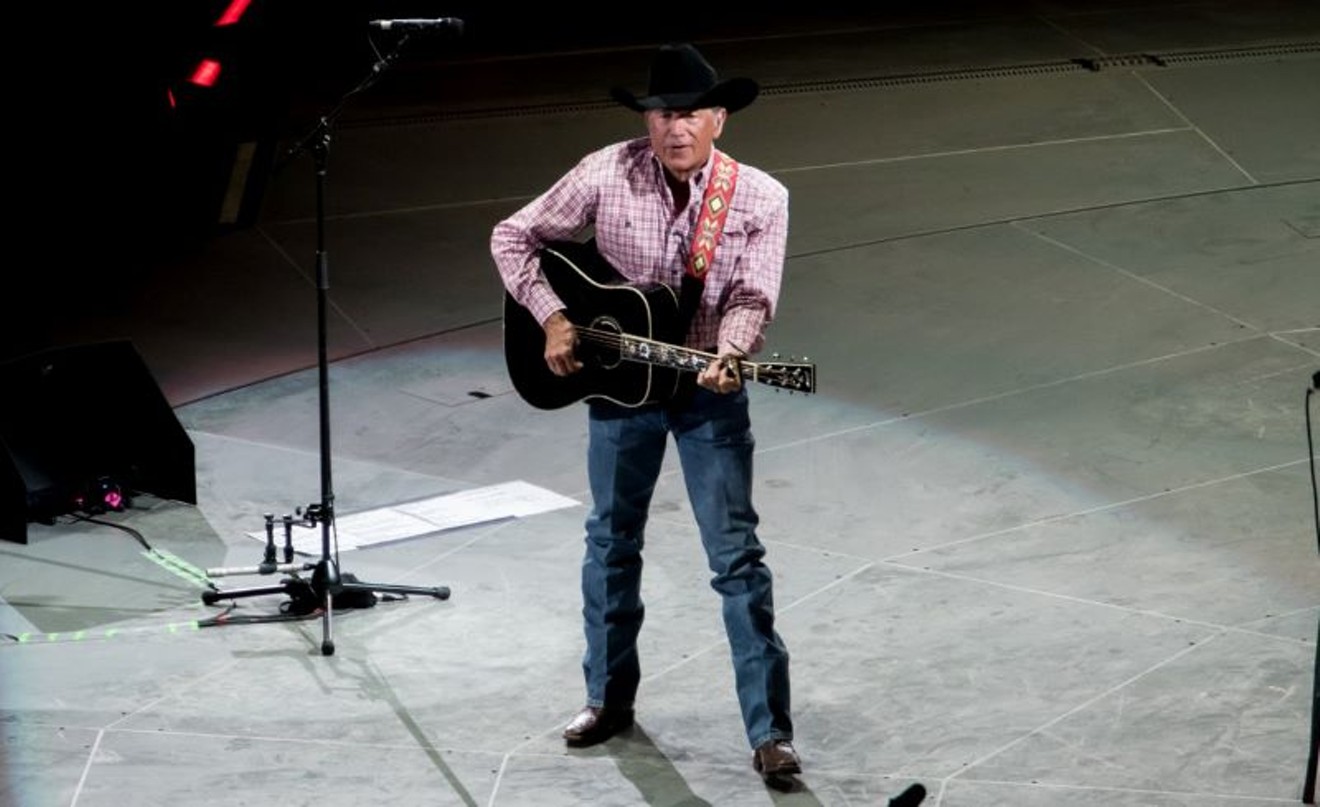 Who's on country music's Mount Rushmore?

Rather than invite a High Fidelity-style deep dive, let's just go ahead and create one for the living and another for the deceased. For the latter, that might mean Bob Wills, George Jones, Patsy Cline and Merle Haggard would get spots.

But any "still alive" version would clearly have to include George Strait: 100 million records sold, the most platinum/multi-platinum albums in country music, to say nothing of 60 No. 1 singles, which is the most of any artist of any genre in music history.

Last night was Strait's 31st performance (another record) at RodeoHouston, and HLSR marked the occasion with a concert-only setup. No rodeo activities meant actual floor seating at NRG Stadium, with a later start of 7 p.m. and Strait putting on a full concert to close out the festivities. It's good to be the King (of Country Music).

But taking the stage first was Ashley McBryde. The Arkansas native was more than up to the task of warming up the crowd, belting out songs like "A Little Dive Bar in Dahlonega," "Never Wanted to Be That Girl." But the highlights were a searing version of the Allman Brothers' "Midnight Rider" and a moving rendition of "Sparrow," from 2020's Never Will. 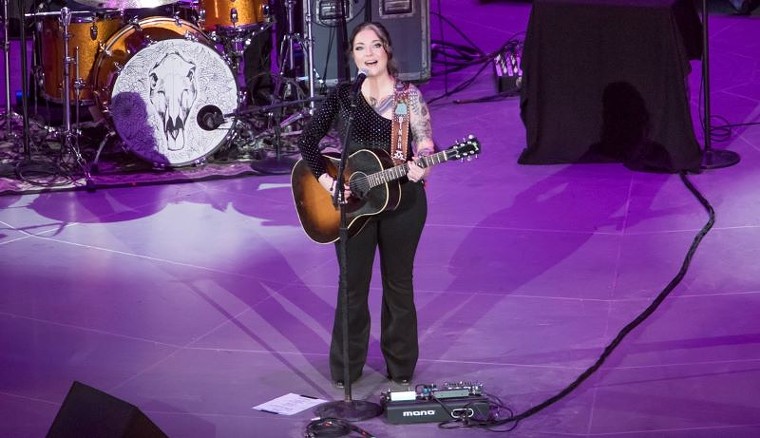 Ashley McBryde was up to the task.
Photo by Jack Gorman
McBryde also said some things that were pretty well received by the crowd. Unfortunately, NRG's notoriously twitchy acoustics made it hard to understand her.

And then there's George. Like many artists his age that we may have talked about before, Strait is no stranger to the phenomenon of reappearing after a "farewell" tour, having allegedly retired from touring back in 2014. This is actually his second return to the HLSR, following a triumphant show in 2019.

After the Rodeo aired their Jackass clips bull riding highlights and some snippets of this year's previous musical performers, Strait took the stage. Clad as unassumingly as ever: jeans, button down shirt, boots, and black cowboy hat, representing that bygone era before interchangeable ball cap country took over radio.

You don't need any better example of this than the opening song. "Heartland" (from the Pure Country soundtrack) harkens back to a time that doubtless resonated with the RodeoHouston crowd, when "a good man worked until the daylight's gone." Not that Strait's tunes strive for deeper meaning, exactly. His discography is stuffed with songs about the classics: failed relationships, love lost and regained, and simple pleasures.

The set spanned a 40+-year career, all the way to 2019's Honky Tonk Time Machine. And if he used one of those most recent songs ("Código") to pimp that particular tequila brand (a strain of which bears his name), well, at least he preceded it by announcing that the George Strait Foundation was buying a house for the widow of a fallen police officer.

[His Foundation has given $48 million to Gold Star families as well as families of police and firefighters who died in the line of duty.]

Strait briefly mentioned his longevity as a way of introducing "Here For A Good Time," letting us know he's "still around." A nice sentiment, even if it kind of contradicts the song itself, which is literally about someone who's "not here for a long time."

Longevity, by the way, is a term you could apply to Strait's Ace in the Hole Band itself, a couple of whom (steel guitar player Mike Daily and bassist Terry Hale) have been with Strait since the Stoney Ridge days. Fun fact: drummer Bobby Jarzombek formerly played for Fate's Warning and Rob Halford. Life is indeed a rich tapestry. 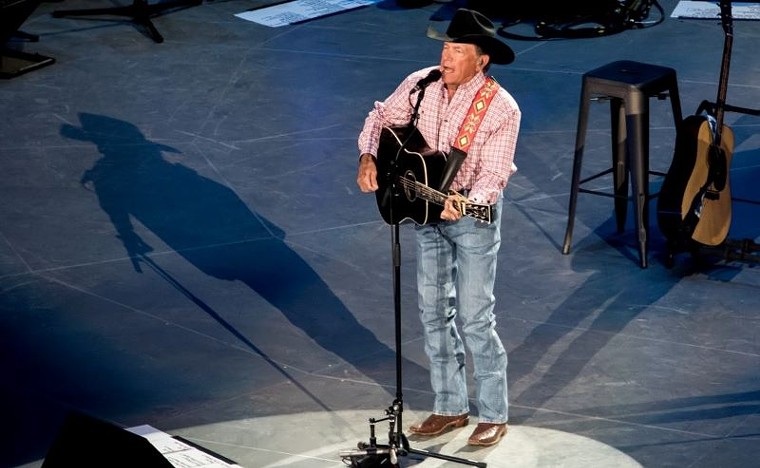 We can't stop here, this is Strait country.
Photo by Jack Gorman
Strait also threw some love to fellow Texans Waylon Jennings ("Waymore Blues") and Bruce Robison ("Wrapped"). The only non-Lone Star denizen honored with a cover was Florida's own Tom Petty ("You Wreck Me" during the encore). Petty was a throwback in his own way, so we'll allow it.

He may appear unhurried onstage (a good way to describe his performance style in general), but Strait doesn't screw around, flying through half the 29-song set in about an hour. To be fair, none of his singles are exactly "In-A-Gadda-Da-Vida," but the guy is still in complete command.

The audience's biggest reactions were for what you'd expect: "Marina Del Rey," "Ocean Front Property," "The Chair" and "All My Ex's." There was still plenty of love for newer selections like "Every Little Honky Tonk Bar" (though projecting the lyrics to that last one didn't hurt).

It was fitting that Strait closed out the main set with the "Unwound," the very first track from his very first album, Strait Country. Some things are eternal: a mother's love, new beard itch, and the Longhorns' inability to succeed in the NCAA Tournament*. I don't know if George Strait at the Rodeo counts, but it's close.

Personal Bias: Realized while doing my pre-work for this that Strait has been as much of the soundtrack of my life as just about anyone, even if I was never what you'd call a devotee. That said, "Amarillo By Morning" is one of my all-time favorite songs.

The Crowd: Huge. Not to put too fine a point on it, I was actually gratified there were no "Let's Go, Brandon" chants when Strait introduced "Come On Joe" (his actual line was, "Not that one.")

Overheard In The Crowd: "Like, Michelle's really cool and outgoing, but her husband is a dud. I met him and was just like: yeah, this guy's a dud. Which is too bad because, you know, Michelle is really cool." — I was stuck walking behind this couple for five minutes.

Random Notebook Dump: "That must be another record to have nine songs with the words 'honky tonk' in the title."

ENCORE
All My Ex's Live in Texas
Take Me to Texas
You Wreck Me (Tom Petty cover)
The Cowboy Rides Away
KEEP THE HOUSTON PRESS FREE... Since we started the Houston Press, it has been defined as the free, independent voice of Houston, and we'd like to keep it that way. With local media under siege, it's more important than ever for us to rally support behind funding our local journalism. You can help by participating in our "I Support" program, allowing us to keep offering readers access to our incisive coverage of local news, food and culture with no paywalls.
Make a one-time donation today for as little as $1.