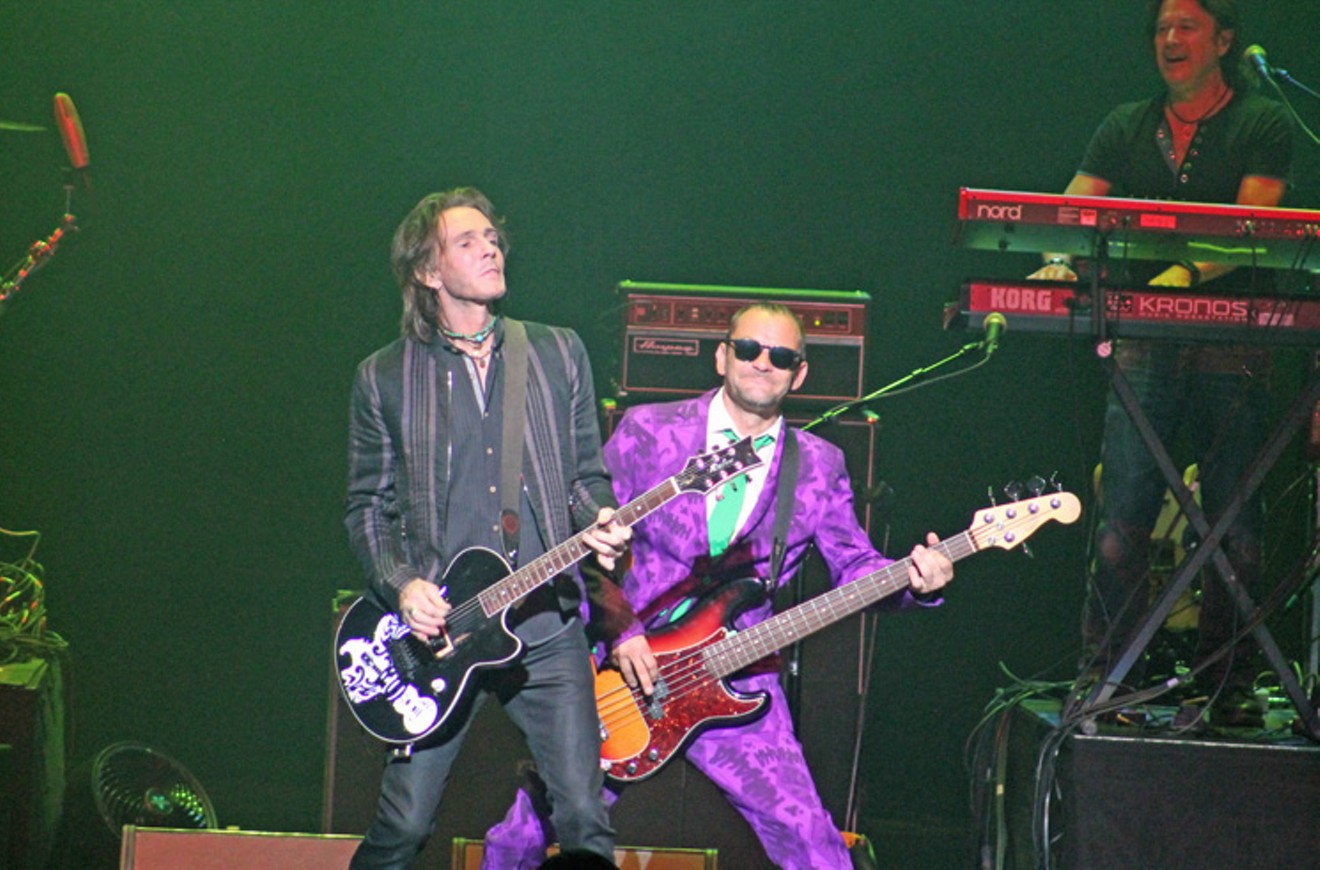 Rick Springfield and band membes Sigve "Siggy" Sjursen and Tim Gross onstage at the Smart Financial Centre. Photo by Bob Ruggiero
As headliner Rick Springfield told us during a recent interview—and has been borne out by industry trends—for artists who blazed the charts in the ‘70s, ‘80s, and ‘90s, package tours are here to stay.
It’s a win for the acts, who can play to (and convert) the individual fan bases on the bill, as well as hit larger venues at higher ticket prices. Rick Springfield.
Photo by Bob Ruggiero
And it’s a win for the audiences who can revisit their youth with several of their cassette-T-shirt-poster old friends. And set lists tend to stick to the hits, though with a some deep track bones thrown out for the hardcore.

He recently re-recorded the entire album live in his living room, so fans got to see where one of Australia’s most famous sons relaxes. And if cameras were allowed into his attic, they’d surely capture (shout out to English Lit majors) a portrait of him rapidly aging.

That’s because on his just-over-an-hour headlining set showcased a level of energy, athleticism, and a shredded body that would be a challenge for a man half of his soon-to-be 73 years of age could ever dream of pulling off (he even got the Houston/Sugar Land crowd to serenade him with a chorus of “Happy Birthday” a couple of weeks early).

And on this night, he even did it while clearly battling a bad cold—though he told the audience he had taken five COVID tests and all came up negative. It didn’t seem to affect his singing voice much, even after he blew his nose several times through the night. At one point playfully teasing the crowd that he’d throw some lucky lady a used tissue “eBay? Some Rick Springfield DNA?” he joked. Rick Springfield.
Photo by Bob Ruggiero
A truly All Killer-No Filler set of a dozen songs, most of which were recognizable bona fide ‘80s hits, with a couple of deep cuts including (as part of a medley) “Bruce,” in which Rick Springfield-as-song-character beds a willing a comely lass only to hear her yell out the first name of Bruce Springsteen while climaxing.

Highlights included a raucous “I’ve Done Everything for You,” “I Get Excited,” “Love Somebody” (accompanied on the screen by clips from his 1984 film Hard to Hold), and “Human Touch.”

The last found him jumping from the stage into the front row crowd to shake many, many hands. There was also a blatant but playful plug for his Beach Bar Rum liquor brand he has with fellow rocker Sammy Hagar in new song “Party on the Beach” (with the Red Rocker appearing on pre-taped video).

Springfield prefaced “World Start Turning” by discussing his lifelong (and continuing) struggle with massive depression. He said the mindset has haunted him since the age of 14 despite all his massive success since then and inspired him to write the tune.

He also encouraged those in the audience who suffered with the condition to not try and hide it, but discuss it openly and get help. 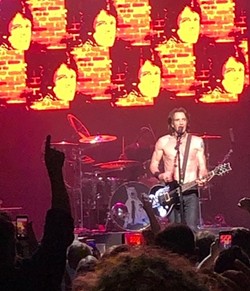 Thanks a LOT, shirtless septuagenarian Rick...
Photo by Bob Ruggiero
All had an amped up energy that clearly spilled over to the audience, more of whom were on their feet for more of the show than most concerts I’ve seen in years (though, unfortunately, there were also more who whipped out cell cameras to shoot video that they’ll never watch, turning some songs into a Sea of Phones).

Springfield encored with his biggest hit, “Jessie’s Girl,” preceded by a video of TV and movie clips in which the song is either sung or referenced. The prize for the best has to go to Alfred Molina’s coked up and half naked drug dealer character belting it out with gusto from Boogie Nights).

Springfield then ran out – shirtless – showing off a ripped and muscular torso and arms with not an ounce of fat on it (again, the dude is almost 73) and ripped into the number, even extending it a bit with a few more of its signature guitar riffs.

Preceding Springfield on stage were Men at Work. Or, more accurately, Man at Work, as vocalist/guitarist Colin Hay was the sole member of the classic MTV video-appearing lineup to grace the stage.

And while the original band hailed from Australia, today (and since 2019), Hay supplemented by a solid quintet that includes three Cubans, one Guatemalan, and one Peruvian (which caused him to quip – perhaps more for the Texas crowd – “See! We’re a band full of immigrants!”) Two of them were actually Women at Work. 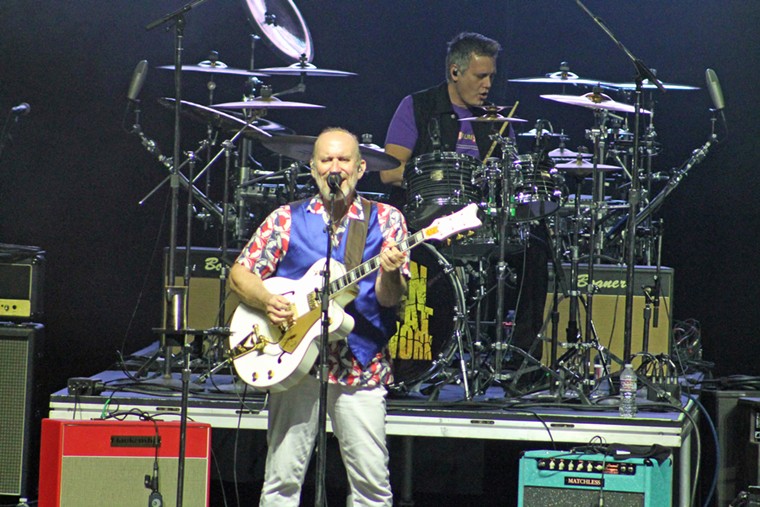 Colin Hay (standing) of Men at Work.
Photo by Bob Ruggiero
Standout players included Schelia Gonzalez on keyboards, flute, and a variety of saxophones (key ingredients on the original recordings courtesy of Greg Ham) and bassist Yosmel Montejo. Less welcome was Cecelia Noël, whose overdramatic stage gestures, shimmying, facial contortions and Big Visual clanking of tambourines and maracas were distracting too much too often (she’s also, uh, married to Hay).

Men at Work packed the first half of their set with deep cuts and Hay solo material, and it dragged in places (as in the psychedelicized “No Sign of Yesterday”).

Though a moody and atmospheric “Down By the Sea” was lovely. Hay did pay tribute to the late Ham (who died in 2012) in the preface to “Dr. Heckyll and Mr. Jive,” the video for which featured him prominently. “I miss him every day,” Hay offered sincerely.

The audience finally got energized with the closing string of the band’s five biggest tunes, of which “Overkill,” “Who Can it Be Now?” and “Down Under” really delivered, the latter two bringing a much-needed sense of fun and Hay’s voice not missing anything in the ensuing decades. 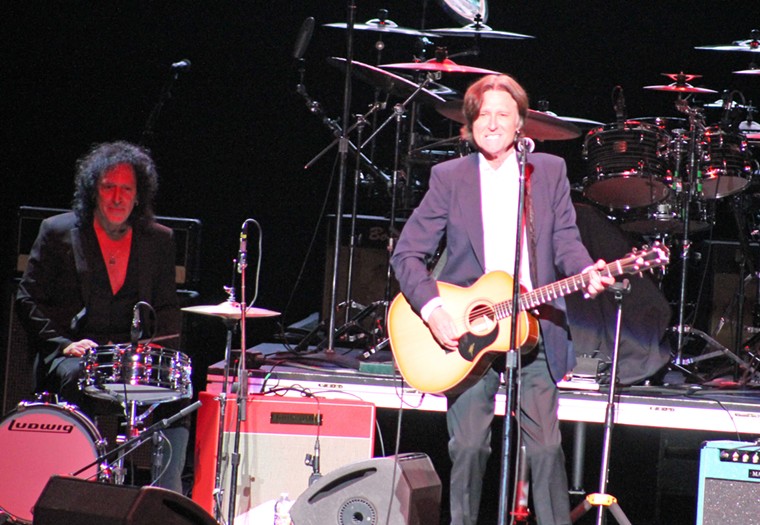 John Waite (standing).
Photo by Bob Ruggiero
Opening the show was John Waite who did time in the Babys and Bad English before launching a solo career. In a short set he covered hits from both of them, in fine voice and with some great (if practiced) one liners. Pointing to his drummer’s miniscule kit, he told the crowd “We’ve got some CDs for sale out there. Please buy some so we can afford cymbals.”

The solo hit “Change” and the Babys’ “Midnight Rendezvous” stood out with some real rock energy, while the better-known hits “Missing You” and power ballad “When I See You Smile” seemed just a tad off and subdued.

The more recent “Bluebird Café” (about a young and aspiring female country singer hitting the stage at the real-life Nashville landmark) won points for sincerity and depth, even if the lyrics were a bit trite.

But credit Waite for having the balls to cover Led Zeppelin’s “Whole Lotta Love” and acquitting himself well against Robert Plant’s ingrained-in-the-memory original. And Waite did leave much of the audience wishing for a couple of more songs. 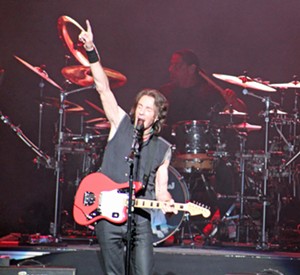 Rick Springfield.
Photo by Bob Ruggiero
All in all, this ‘80s-centric package tour was absolutely worth unpacking. And it proved that—while nothing new to his dedicated fans—there’s more rock in Rick Springfield than he’s given credit for, or his image has purveyed.

Oh, and I really have to start working out more…

The Crowd: Heavy on post-menopausal gal pals who shook off years with dancing and shrieking; some accompanying husbands and boyfriends showcasing varying degrees of interest. Lots of rose bouquet bearers in the front row (anticipating Springfield’s signature move of shredding it across his guitar strings in one stroke, sending petals flying). One little girl wearing cat ears who especially seemed to really like Men at Work’s “Who Can it Be Now?”

Overheard in the Crowd: “All those women in the front row who probably use hand sanitizers all day don’t care if they catch Rick Springfield’s cold when he touches them after blowing his nose!” – Mrs. Classic Rock Bob, aka Lorretta Ruggiero, Houston Press Food Writer. The same woman who, 40 years ago at the age of 13, actually baked Rick Springfield a birthday cake.

Setlist (with an assist from Setlist.fm)
Rick Springfield
Affair of the Heart
I Get Excited
Party at the Beach Bar
I've Done Everything for You (Sammy Hagar cover)
World Start Turning
State of the Heart (Mondo Rock cover)
Bop 'Til You Drop / Bruce / 867-5309/Jenny / Don't Walk Away / Rock of Life / What Kind of Fool Am I
Love Is Alright Tonite
Don't Talk to Strangers
Human Touch
Love Somebody
Jessie's Girl

Men at Work
Touching the Untouchables
No Restrictions
Down by the Sea
I Can See It in Your Eyes
Dr. Heckyll & Mr. Jive
No Sign of Yesterday
Overkill
It's a Mistake
Who Can It Be Now?
Down Under
Be Good Johnny

John Waite
Change (Spider cover)
When I See You Smile (Bad English song)
Bluebird Cafe
Missing You
Midnight Rendezvous (The Babys song)
Whole Lotta Love (Led Zeppelin cover)
KEEP THE HOUSTON PRESS FREE... Since we started the Houston Press, it has been defined as the free, independent voice of Houston, and we'd like to keep it that way. With local media under siege, it's more important than ever for us to rally support behind funding our local journalism. You can help by participating in our "I Support" program, allowing us to keep offering readers access to our incisive coverage of local news, food and culture with no paywalls.
Make a one-time donation today for as little as $1.