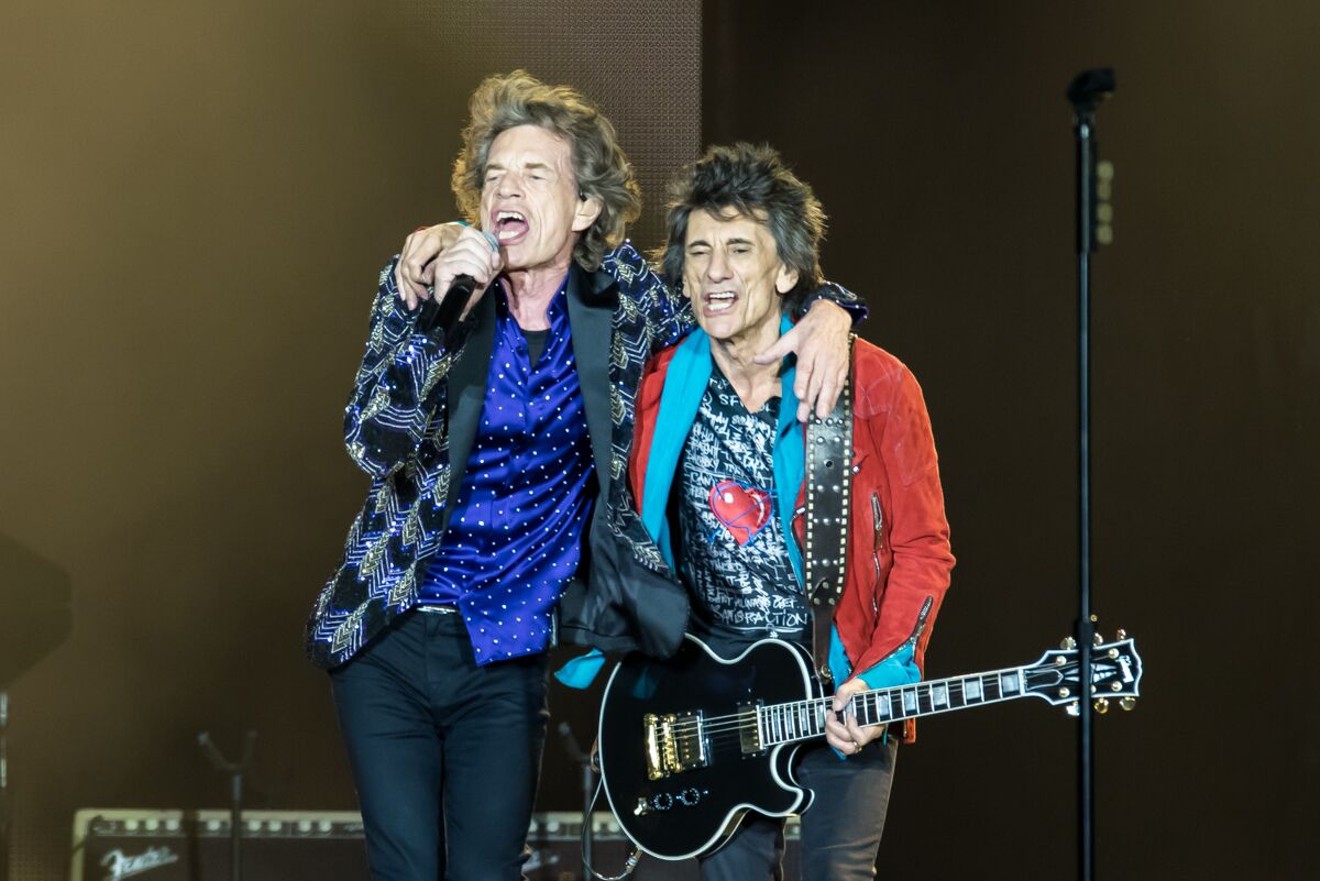 The Rolling Stones are human like the rest of us, but it's hard not to see them as some of the fundamental archetypes of rock and roll. Mick Jagger is the handsome, charming, engaging frontman; Keith Richards is the wild creative who has lived more lives in one life that most of us can imagine; Charlie Watts is the quiet one, the humble one, the guy who does his job in the background and is pleasantly surprised when people cheer for him; and then there's Ronnie Woods, the showman and class clown. You've likely seen one or more of these archetypes in every concert you've ever attended, but the ones that took the stage at NRG are the real deal.

It's a lot to process rationally or objectively. This is a show that ended with the following run of songs: "Paint It Black"; "Start Me Up"; "Brown Sugar"; "Gimme Shelter"; and "(I Can't Get No) Satisfaction." If a band had written literally any one of those songs, they could have lived the rest of their life in pure comfort based on the royalties from it alone, not to mention continued concert tours. The Rolling Stones wrote all of them. They still play all of them splendidly. "Gimme Shelter" is the type of song that should give anyone hearing it in person chills.

But what sells the performance is not just the fact that these are some of the best-written songs of all time or that all the people performing them are talented musicians; it's the authenticity that they bring to the table.  However big of hams you might think Jagger and company to be, there never feels for a moment like they're trying too hard, even when they probably are trying too hard. When Keith Richards looks down at his guitar in either pain or wonder, it feels like the most natural thing in the world and not the product of growing up watching music videos on MTV. When Watts cracks the rare smile to show he's thinking, "oh, this is pretty neat what we're doing," it really feels like he's discovering it for the first time. When Mick Jagger moves like Jagger, you realize the absurdity of anyone else trying to do so. 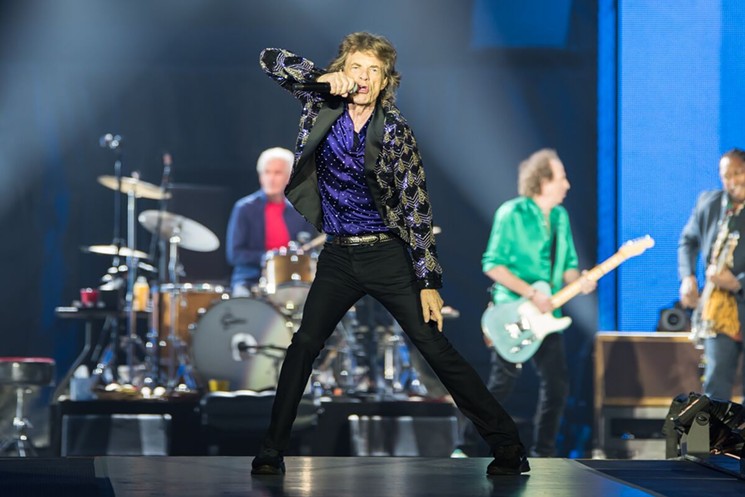 Mick Jagger has never met a post he didn't like.
Photo by Jack Gorman
It's amazing how they make the whole thing look so simple to the point of almost being mundane like it's just another Saturday night for them. But watching it, you know deep down that every single show The Rolling Stones perform at this point is special, because we have no idea if this is going to be their last trip around the globe or not.

There is a playbook that most rock bands follow live. If you were asked to describe what going to the average rock show is like, you could probably do a pretty good job laying out everything that's going to happen. The hot opener; the band introductions; someone getting a solo; the acoustic break; the deep cut/bathroom break song; the singer leading the crowd in a call and response; an extended jam on a well-loved song; the fake goodbye before the encore. Adherence to this playbook swallows some bands alive; because they're slaves to the formula, their show becomes an uninteresting slog, like watching a bad cosplayer trying to redo a famous movie on Youtube.

But The Rolling Stones helped write the playbook, and they run every play in it like a well-oiled machine. It's almost like seeing a miracle in real life. One hundred years from now people will still be discovering The Rolling Stones and wondering how one group could write so many good songs. "Were they really real?" they'll wonder. And the shame is we won't be there to tell them, "yes, they were real, and they were glorious." 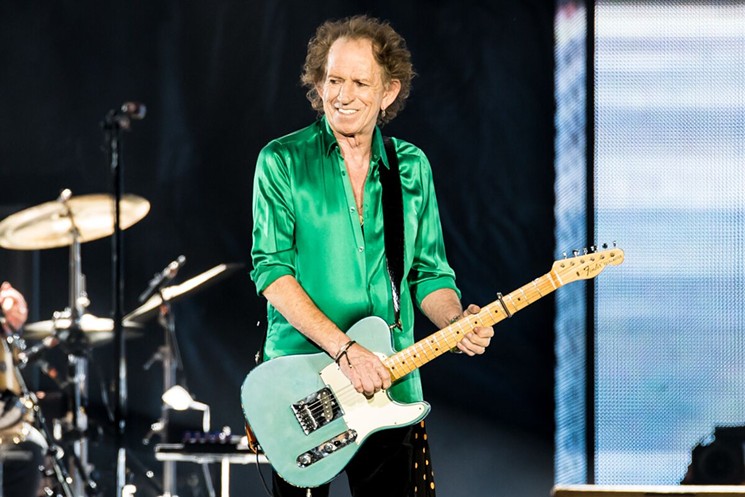 Keith Richards still rocking, still smiling.
Photo by Jack Gorman
Personal Bias: My favorite band was playing in The Woodlands tonight and I did not go because sometimes being a music writer means putting aside your favorite music for important music.

The Crowd: Taking the MetroRail away from NRG Stadium, I almost watched a drunk racist get his clock cleaned, so that was something.

Overheard in the Crowd: "...as long as we cuddle and I can burp, we're fine." I wasn't paying attention to this conversation until that part, and I desperately want to know how that sentence started.

Random Notebook Dump: When he started taking me to concerts regularly, my father had a lot of advice on proper concert attendance. Show up early. Don't fall for the encore fakeout. Save your ticket stubs and tour shirts. That last one struck me a little weird at the time; my father never sat me down with a big book of concert stubs nor did I remember him having more than a handful of concert tees at the time. But jammed into the corner of a painting in our hallway was a ticket from a Rolling Stones show at the Astrodome on the Tattoo You tour. I can't ask him now, but I have a feeling that might have been the last major concert my mom and dad went to before I was born; it was at least the last important one.

When my dad died, we went through is things to try and put together a display at his memorial service, a collection of items that represented him and his passions. Photos of him and the people that loved him the most. Bibs he wore from the runs he ran. And a shirt that I had forgotten existed: The Rolling Stones Tattoo You tour shirt that he bought all the way back in 1981, still in shockingly good condition.

My dad's birthday passed quietly earlier this week, and I did my best not to dwell on it too much. It's the first one he hasn't been around for, and I'm still not sure what to do on days like that. But I like to think that if he is somewhere out there, watching what's going on down here, he would be a tiny bit jealous of how I spent my Saturday, even though I know in his old age he would have balked at buying a $45 tour shirt.

It would have made a good birthday present.
KEEP THE HOUSTON PRESS FREE... Since we started the Houston Press, it has been defined as the free, independent voice of Houston, and we'd like to keep it that way. With local media under siege, it's more important than ever for us to rally support behind funding our local journalism. You can help by participating in our "I Support" program, allowing us to keep offering readers access to our incisive coverage of local news, food and culture with no paywalls.
Make a one-time donation today for as little as $1.