The Boss rocked a packed crowd Monday night Photo by David "Odiwams" Wright
“I see some of y’all out there with new friends,” chuckled Rick Ross as he walked across the stage at the House of Blues. His red and black silk shirt flowed with the air being blown across the stage as he stopped mid-stride, adjusted his shades and took a sip from a white Styrofoam cup.

The eerie chimes from “Nobody’s Favorite”, the Gunplay assisted single from Ross’s recently released Port of Miami 2 drifted from the speakers as the crowd lifted their phones in the air. Gunplay, the Carol City rapper who has been with Ross from the beginning of his career strutted onto the stage to join his friend and Maybach Music Group label owner as the two traded versus in front of the packed and smoky room. 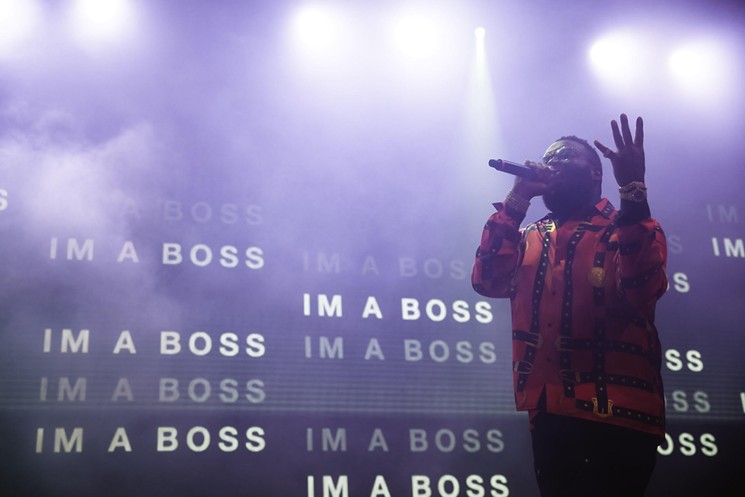 
Rick Ross released Port of Miami in 2006 on the strength of the hit single “Hustlin” and since that time has managed to release ten studio albums and a string of features. That catalog of hits was on full display Monday night as Ross ran through hit after hit. The previously mentioned “Hustlin” along with “Aston Martin Music”, “Stay Schemin” and “B.M.F” were, of course, crowd favorites that got the whole room moving with the beat. These and Ross's history of releasing solid bodies of musical work left fans with high anticipation for Port of Miami 2.

However, it was Ross’s focus on the hits which left the Port of Miami 2 Tour with surprisingly little Port of Miami 2. The recently released album is, once again, getting Ross rave reviews, featuring familiar collaborations with Drake, Meek Mill, and Wale, but also offerings from newer talent like A Boogie Wit Da Hoodie and Summer Walker.

It’s a great problem to have — do you lean more toward offering fans the classic, radio tested tracks they want, or do you focus on your latest album receiving high praise? Ross chose the former, sprinkling Port of Miami 2 throughout his list of chart toppers, and die-hard Ross fans in the building were appreciative.

The House of Blues was at capacity as fans pressed against each other and the stage while Ross paced back and forth before the ever-changing screen. Images of Miami, a young Ross, music videos, and MMG logos illuminated the room as Ross lead the crowd in call and response hooks from his albums.

“Say Ugh!” he grunted in his signature style as the audience grunted back. “Say ugh when you make a stack. Yell Rozay one time H-Town!”
KEEP THE HOUSTON PRESS FREE... Since we started the Houston Press, it has been defined as the free, independent voice of Houston, and we'd like to keep it that way. With local media under siege, it's more important than ever for us to rally support behind funding our local journalism. You can help by participating in our "I Support" program, allowing us to keep offering readers access to our incisive coverage of local news, food and culture with no paywalls.
Make a one-time donation today for as little as $1.