Rudyard's Gets an Instant Makeover

Lelia Rodgers remembers the band that played the night Rudyard’s first opened its upstairs live music show space. It was a Thursday night in 1997, she said, and the headliner was Moses Guest. When the band members arrived, they were confused by the changes made to the venue, which was already "The Living Room of Montrose" by that time. They arrived, revved to go onstage at “Rudz,” a stage which had always been downstairs until that evening.

“The bands for that night, on a Thursday night, showed up to play and the plywood was down and the staircase was visible for the first time and the stage that had been there was gone and they were like,…” she shrugs her shoulders and feigns a look of confusion. “And that’s kind what’s going to happen this Friday.”

The bands playing tonight at Rudyard’s are Ultrariot, Hooligan 45, Storm of Ages and Sorted Scoundrels. They’ll break in an all-new stage with an upgraded lighting system, the first major changes to the show space since that night Moses Guest christened Rudyard’s upstairs room more than 20 years ago. Rodgers has owned Rudz since 1993 and she said the changes are timely, “super serendipitous,” and were sparked, in part, by one of the busiest people in Houston’s music scene.

Whitney Andrew, known from acts like Frog Hair and Expensive Genes, as DJ Supermarket and as one of the creative forces behind Artificial Head Records, contacted Rodgers last fall about retooling the upstairs area. Her bands and her friends’ bands had played Rudz numerous times and, while we all shared drinks during a break in construction this week, she admitted to Rodgers “I’ve been drinking here since I was like 19. I love Rudz.”

So, she said, the frustration she experienced performing a show at Rudz last fall spurred her into action.

“We were playing the Halloween show and we wanted specific lights or whatever,” she recalled, “and that was when it was brought my attention that, no, we only have these set, old can lights and you can’t do anything with them.”

She’s a longtime friend of Rudyard’s longtime sound and light engineer, Joe Omelchuck. She said he did everything to accommodate the band’s wishes that night.

“Joe’s in here doing the best he can, we’ve all been watching him hop from chair to chair, moving lights and moving cameras, doing stuff.”

Andrew also noticed Rudyard’s was renovating its downstairs kitchen space. She had an idea.

The stage was a work in progress when we met earlier this week.
Photo by Jesse Sendejas Jr.

“I decided to shoot a message, just to Facebook, and I didn’t even know who I was talking to,” she said. “I was like, ‘Hey, I see y’all are renovating downstairs. If you have any interest in doing the upstairs I think I could talk you through a pretty cost-effective consultation.”

Rodgers was on the other end of that Facebook correspondence. She told Andrew she was open to the idea. She suggested they wait until the holidays passed and revisit the notion after the first of the year. That time allowed her to recover from some health issues and vet Andrew, whom she’d never met.

“After she reached out to me, I, of course, have Facebook at my fingertips and I had all the time in the world. So, I laid on my back and spent a lot of time on YouTube and became really familiar with Frog Hair. And I talked with people that would know her, primarily (Rudyard’s alum and Rockefellers booking manager) Mike Sims, and he had only positive things to say.”

She learned Andrew had experience on stage builds from her time at Satellite Bar and the short-lived Market Square venue Spruce Goose: Social Flyers Club. More importantly, she said Sims told her, “You’re talking to someone who’s part of it, who totally gets it and will have the sort of insight that you’re looking for.”

Andrew’s query was timely. Rudz’s one-time neighbor, The Next Door, is being replaced this spring by Sixes and Sevens, a new craft cocktail bar under the Rudyard’s umbrella. Rodgers said, “Before the coronavirus decided to host a pandemic on this globe, it already looked like we were going to be pushing that ETA into the middle of April, if not the end of April.” Because she was concerned upstairs construction would hamper the new concept’s opening, and because the stage needed soundproofing ahead of the new bar's debut, she green-lit the work to begin right away with Andrew at the lead.

“I came in here without much of a plan at all, just sort of flying by the seat of my pants,” Andrew admitted. 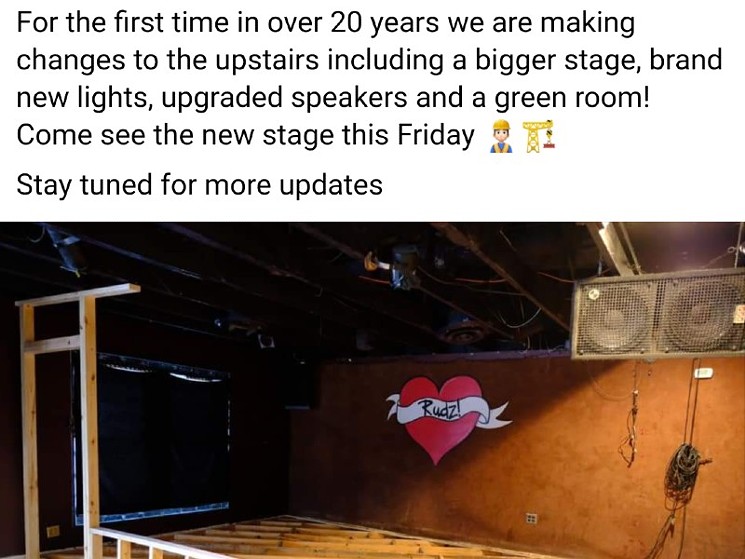 She made a Facebook post asking friends and followers for input. She combined those ideas with the needs, wants and concerns of the staff and added her own notions. But she mostly had lots of loose notes until she had a fortuitous lunch with Rachel Hulsey, a friend and fellow artist, and learned during that meal that Hulsey had a background in single-family home architecture. It wasn’t long, she said, before she “Tom Sawyered” Hulsey into providing some missing design expertise to the project. She said her friend was happy to help.

“She drafted up this really great looking plot that these guys understand,” she said. “She was like a total game-changer, life saver, just came in and did it.”

Rodgers kept the work in-house with Mickey Wolf, who’s managed all of Rudyard’s recent renovation work, overseeing this project, with help from Charles Truwitt. They were literally running wood saws and pounding hammers while we discussed the build-out. They day we met was day three of a project which had to be complete in five days, before tonight’s show.

“We had to do this right in the middle of an active calendar, which was crazy,” Andrew noted.

The old stage was set in a corner of the spacious upstairs room, which, Rodgers said, was once apartment space long ago. The new stage is centered along the back wall of the room. Andrew said it is 16 feet wide and 14 feet deep, so there will be plenty of room for bands to create manic antics and memories for Rudyard’s show-goers.

“There’s not another stage like this in Houston right now,” Andrew said. “It’s got that front wall, which sort of reminds me of the old downstairs stage at Fitzgerald’s. There’s a ramp on the right side for gear but also for handicap access, which this room has struggled with for a long time.”

Other amenities include a side stage door which leads to band gear storage space. Later, they plan to create a green room to help draw more touring acts to the space. Each end of the stage will boast panels and speakers and the room’s camera system will be trained on center stage. Since 1997, wall dimmer switches controlled the stage lighting. The new system will include back lighting and new spotlights.

“It’s going to be completely different. There’s an actual light board now, you can control it, set scenes, the whole thing,” Andrew said. “I think every step of the way we were worried that Joe was gonna sink his nails in and we were gonna have to drag him down the road with us, but he showed up yesterday and he was like, ‘I stayed up all night and I know everything about these lights now, let’s go!’”

The team plans to have the stage set for tonight's show.
Photo by Jesse Sendejas Jr.


“This is kind of like running a big cruise ship that never goes anywhere,” Rodgers said of Rudyard's, which has drawn some incredible talent to its deck over the years. She said The White Stripes and The Shins played within the same week back in 2001. The Decemberists have played there and last year’s buzz was caused by Dave Chappelle dropping in on its Comedy Open Mic Night.

“There’s very limited spaces to play in Houston and this place is like an institution, you know?” Andrew said. “Beyoncé played here.”

“I feel like there’s a shortage of venues in town which means there’s a big opportunity for spaces like this to snag some slightly larger fish,” she continued.

“Like so many other places, so many venues here in town, Rudz has had amazing performers and I would like for this new stage to basically reinvigorate people’s interest in live music and their commitment to touring, local and regional, up and coming bands,” Rodgers added.

As we chatted, Rodgers and Andrew spoke comfortably, like old friends. Both have been integral to Houston’s music scene for some time and it’s hard to believe they just met through this project. While building a new stage for Rudz, they built something else that's special, too.

“I think that we just turned out to be a good pair working together,” Andrew said. “I don’t push my ego too forward on anybody. I mean, I’ve got strong opinions but Lelia’s a businesswoman. I came in here and thought I’m not gonna bullshit somebody who’s been doing this. I had to prove myself in conversations and prove that I cared and was someone she could trust.”

“I think I have a pretty good read on people. I tend to sort of give them the benefit of the doubt, but I’m okay with that. It hasn’t bitten me so hard that I’ve been like ‘I’m never doing that again!’” Rodgers said.” “She’s completely into the whole music scene to the point of having a record company, doing posters and just talking with her – she’s smart and articulate and really, really knowledgeable. She’s smart and has done her homework and has synthesized it into a narrative she can share with somebody who doesn’t have the technical expertise. I sort of had to wrap by head around it to green light it.”

“I came in here to do this because I wanted to do it,” Andrew said, “and it’s just been worth it to build this relationship.”
KEEP THE HOUSTON PRESS FREE... Since we started the Houston Press, it has been defined as the free, independent voice of Houston, and we'd like to keep it that way. With local media under siege, it's more important than ever for us to rally support behind funding our local journalism. You can help by participating in our "I Support" program, allowing us to keep offering readers access to our incisive coverage of local news, food and culture with no paywalls.
Make a one-time donation today for as little as $1.