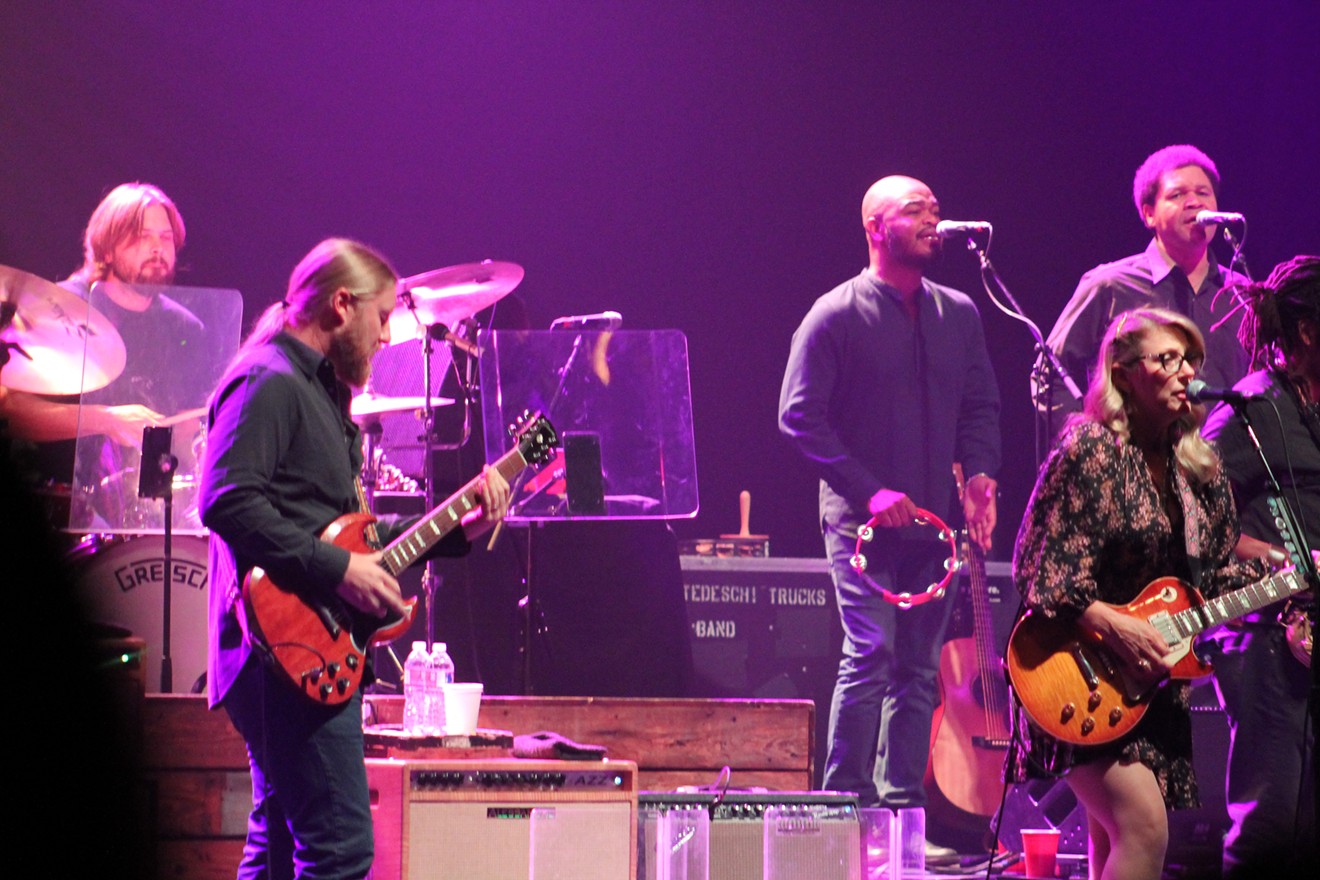 In music journalism, terms like “spiritual” and “soulful” get thrown around quite a bit. A good chunk of bands have neither evident in their music. Some of have one. Fewer have both. And still less have both in abundance.

Count the Tedeschi Trucks Band in that rarest of categories. A band whose live show could convince the most empty-hearted atheist to embrace those terms, the band seamlessly showcases the genuine transformative power of music with a mixture of rock, soul, blues, jazz, R&B, and even a dash of Indian music.

Actually, “band” is too generic a term. That’s because the group led by husband and wife team Derek Trucks (lead guitar) and Susan Tedeschi (lead vocals/guitar) with 10 expert players in more of a true ensemble. And for the sold-out crowd of 2,500+ fans at the Hobby Center, the TTB’s 2-hour set (also the opener for a short fall tour) might just count as their church visit for the week.

Southern Avenue's rock and soul set opened the show.
Photo by Bob Ruggiero
Opening the show was Southern Avenue. The five-piece rock and soul band from Memphis, Tennessee’s name was inspired by the location of the legendary Stax Records. It’s also their current label which this year released their sophomore effort, Keep On.

Then it was time for the headliner. As a frontwoman, Susan Tedeschi’s always-powerful vocals are a combination of spitfire and sorrow, depending on the material. That clearly came through on opener “Don’t Know What,” the socially—relevant “High and Mighty” (also the title track of the band’s recently-released EP), “Part of Me,” and “Shame.”

She's the visual focal point while infusing joy or wringing sorrow out of lyrics. Her nearly-spotless record on this night was marred only by the cover of Derek and the Domino's “Bell Bottom Blues,” which calls for a passionate anguish that was not quite delivered.

At any TTB show, there’s always audience anticipation as to where and when Trucks will be unleashed and rip out one of his utterly distinctive solos – often with the small glass bottle he uses as a slide and whose first ancestry step leads directly to Duane Allman.

One of (if not the) finest guitarist of his generation, Trucks’ tone seems almost human-like in its expression, even if the man who creates the sounds remains his usual stoic self onstage. Equal parts intense concentration and Zen mindfulness, the band’s leader is usually facing Tedeschi or the backline of the band instead of the audience.

Guitarists, married couple, and band namesakes Derek Trucks and Susan Tedeschi
Photo by Bob Ruggiero
Though he did manage to break into a wide smile during “I Want More,” just as Tedeschi ripped into her own best solo of the evening. And though her instrumental work is usually (and unfortunately) overshadowed by Trucks, this particular tune included a genuine guitar conversation (as opposed to a duel). Both Tedeschi and Trucks just shredded, giving the song a punch live that its studio counterpart lacks. His work on “Shame” and always-crowd-favorite “Midnight in Harlem” also stood out.

And despite the math of a dozen band members onstage, each player and singer got a spotlight section, with keyboardist Gabe Dixon, trombone player Elizabeth Lea, and the drumming section of Tyler Greenwell and J. J. Johnson shining in particular (Trucks must have learned the power of dual thumpers from his years with the Allman Brothers Band). Backup vocalist Mike Mattison – whose history with Trucks goes back to the guitarist’s solo band – delivered a powerful lead on Lee Dorsey’s “Get Out of My Life, Woman.”

The show closed with a jaw-dropping cover of Elton John’s “Border Song” (the one with the “holy Moses” refrain) that turned the Hobby Center into a tabernacle. And it led one to wonder just how the band would handle a gospel album. Then came the tsunami of sound power that was “Made Up Mind.”

It was a bit head-scratching that the set list included only two tracks off Signs, the band’s most recent full-length record that also lends its name to the tour. Particularly missed was the raucous title track “Signs, High Times,” “I’m Gonna Be There,” and “Strengthen What Remains.” Trucks recently spoke with The Houston Press about the record.

Nevertheless, the Tedeschi Trucks Band only continues to gain power, depth, and skill since their founding nearly a decade ago. And while the records are excellent, it’s their live shows that move the band - and their audience - to another level entirely.

Encore
Border Song (Elton John cover)
Made Up Mind
KEEP THE HOUSTON PRESS FREE... Since we started the Houston Press, it has been defined as the free, independent voice of Houston, and we'd like to keep it that way. With local media under siege, it's more important than ever for us to rally support behind funding our local journalism. You can help by participating in our "I Support" program, allowing us to keep offering readers access to our incisive coverage of local news, food and culture with no paywalls.
Make a one-time donation today for as little as $1.