When he was ten years old, Friendswood native Tenney Way III saw a little movie called 8 Mile. Inspired by Eminem and the now iconic biopic, Tenney put his pen to paper, channeling his first rhymes at the age of 11. Now a decade into his rap journey, the 21-year-old is gearing up for an eventful 2019, starting with his Frontier Fiesta debut performance this Thursday night at University of Houston.

In a recent phone interview with the Houston Press, Tenney couldn’t help but burst into song. His smoky growl turned the telephone into a microphone as he sang the chorus to an upcoming song entitled “Concert,” a number he hopes will warm up the crowd for his festive, high energy set.

He says the show will lean on tracks from New Waves, an upcoming project set to release later this Spring, including his new single “Mismatch Pair of Socks,” which dropped on Spotify this week to coincide with his Thursday night concert. The genre bending track opens with a bizarrely theatrical vamp a la Kander and Ebb’s “All That Jazz.” When it’s time for Catherine-Zeta Jones to tempt the listener with “Come on babe, why don’t we paint the town…and all that jazz,” the bass drops, the ear worm hook kicks in, and Tenney drives the banger home.

As his sonic palette continues to evolve, his lyrical theme of staying true to yourself remains constant.

“I know there’s so many codes, and so many clichéd stories of, like, what you should and shouldn’t do, you know? You should graduate high school, go straight to college, come home from college, get the job, you know, get a family. It’s like — it’s like they have your life already planned out,” says Tenney. 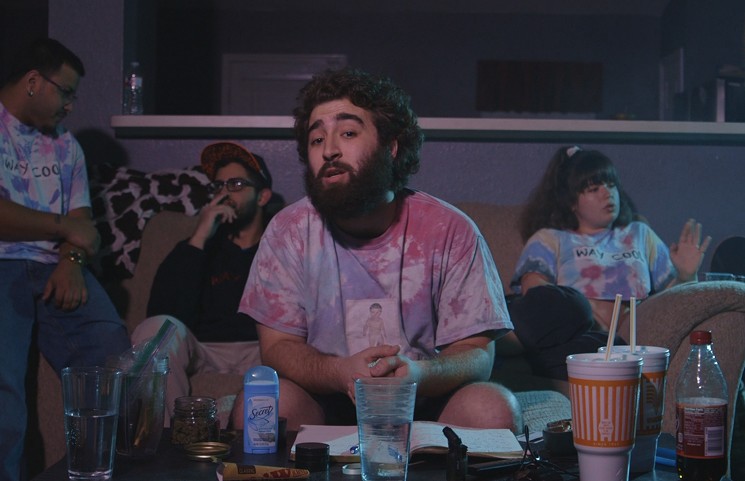 Expect bangers, special guests, and tie dye T-shirts from Tenney Way III at Frontier Fiesta this Thursday night.
Photo by Miguel Cuevas
“I don’t care about impressing everybody with clothes or jewelry or any of that stuff. Materialistic things are, they’re cool, but really they just hurt people.”

Unconcerned with fashions and fads, Tenney developed an affinity for tie dying random T-shirts he would find at thrift shops in his early high school years. As he entered his upperclassman years, he discovered his love for greener pastures.

“Junior year I started smoking weed and it just kind of fit. Everybody thought I was a pothead before I even smoked weed.”

Tenney says he plans to feature special guests Guilla and Dat Boi T on Thursday night for a performance of his new stoner anthem “Everywhere We Go.”

“I’m gonna bring them out. It’s like three different vibes of Houston, and just rap in general. But we’re all stoners so it all, like, clicks you know? Weed brings everybody together.”

His set will also include “Be You,” an aptly titled be-yourself track (one he says he’s resurrected from his creative vault) especially fitting for Frontier Fiesta.

“It’s funny. I always told myself the first time I’m going to perform it is at a festival. And now we’re doing the festival.”

You can catch Tenney Way III at Frontier Fiesta’s Main Stage on Thursday, March 21 at 6:30 p.m. at University of Houston. All ages, free admission. Follow him on Twitter and Instagram @10eWizzle.