The Texas Gentlemen Cover Lots Of Ground With Their Latest Release Floor It!!!

The Texas Gentlemen will release their eclectic sophomore release Floor It!!! on July 17 on New West Records. Photo By Barbara FG 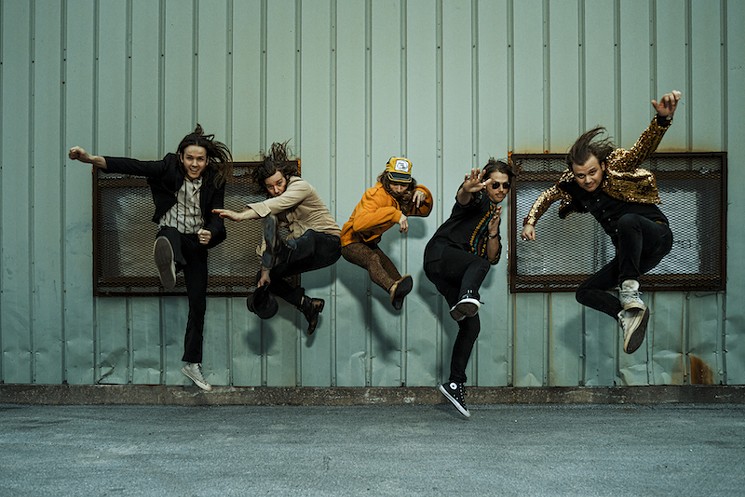 The Texas Gentlemen will release their eclectic sophomore release Floor It!!! on July 17 on New West Records.
Photo By Barbara FG

2020 is the year to expect the unexpected to say the least and The Texas Gentlemen are adding a sense of positivity to this trend with their upcoming album Floor It!!!, due out July 17 on New West Records.

The Texas Gentlemen are made up of some of the Lone Star state's finest players who have served as backing bands for Leon Bridges, Nikki Lane, George Strait, Joe Ely and Kris Kristofferson to name a few.

The band proved they could step forward and represent themselves with their 2017 release TX Jelly. With Floor It!!!, the band is proving yet again that The Texas Gentlemen are capable of playing any style of music while making it their own.

Discussing the process of branching out on their own, Daniel Creamer, one of the front men of the band, co-vocalist and keyboardist says, “I think for us, it wasn't a big leap necessarily but it was still definitely a shift for the band.”

The band was used to working around the dynamic of backing a “leader” or “boss” of the band but Creamer sees the benefit of shifting the focus to the entire band as a group. “Everybody is really chill and copacetic with rolling with the punches and letting each other take the lead whenever it's necessary, whether it’s onstage or off. That part I personally love and it makes for a really healthy and fun environment.”

The Texas Gentlemen were clearly having fun and feeling adventurous when they wrote Floor It!!! The rich and cinematic album plays seamlessly from track to track with each song experimenting with sounds and influences.

Floor It!!! is impossible to categorize into a genre, a difficult skill for any band to pull off and usually the sign of immense musical talent and a deep understanding of songwriting.  The album goes from progressive piano rock to floor shaking rock without missing a beat.

In Floor It!!!, the Gentlemen invoke influences from Brian Wilson, Wings, Fleetwood Mac and the most famous backing band of all, The Band without ever sounding like a copy of others.

For a band which frequently gets lumped into the Americana category of music, Floor It!!! should help set the record straight that The Texas Gentlemen are much more than that.

“That’s the scene that we've been in a lot,” says Creamer. “The fact that we’re called The Texas Gentleman, people just assume that and I don't fault anybody for that. One thing that we are really excited for this record is to establish more of what our sound is.”

“We know what type of sound that we like and we want to make. When we started really making it and we could hear it happening, we got really excited like okay, people are going to hear this and understand that this is not just in this one box.”

For Floor It!!! The Texas Gentlemen got some help from David Pierce to add strings and horns throughout the album creating a dynamic and cohesive sound for the album as a whole. A perfect example of the band’s ability to create perfect sequencing and achieve an elevated sound is the smooth transition from the song “Easy St.” to “Hard Rd.”

Both tracks include Pierce’s string arrangements helping the songs melt together despite landing on different ends of the emotional spectrum from the lighthearted “Easy St.” to the more somber “Hard Rd.”


“He arranged everything in a matter of days,” says co-singer, front man and guitarist Nik Lee of Pierce’s amazing ability to arrange. “We met in the studio and it was a mind blowing addition to what we were used to hearing. It was, dare I say a flooring experience. It was literally like hearing the music quality go from five to eleven. It added a ton of texture. It was kind of stark in comparison to the way the band started before we added the strings.”

The decision to release and album when touring is not an option due to COVID-19 has been a difficult one for bands to make this year but Creamer explains that the band was ready to make this album available to their fans.

“Ultimately, we had taken so long to get this done so we were already at the end of our rope as far as waiting. The option to wait even longer was just not something that we wanted to even think about and ultimately, if people are listening to music, it's not a bad time to release music but it sucks because you can't play,” says Creamer.

"Ultimately, if people are listening to music, it's not a bad time to release music."


The Texas Gentlemen along with their label New West Records have found ways to make the release more exciting and engaging including the album doubling as a board game for people to play at home while they listen, an idea the band had decided on pre-pandemic.

“When all this happened it definitely seemed like people are going to have all the time in the world to play a game, especially a drinking game,” laughs Creamer. “The idea really was just to have something that was going to be an extra for the album to feel like its own world and to be more four dimensional.”

Fans can pre-order the album now in CD or vinyl format, both which come with the board game, and also have bundle options available for purchase through New West. Last week, the band decided to release a song a day and they are working on an alternative to an album release show.

“It’s been really cool cause we're trying to be creative with engaging people and engaging our audience. We have some really exciting, cool, weird and interesting stuff coming up that we are going to do,” explains Creamer. He tells fans to stay connected through the bands social media accounts for announcements coming soon.
KEEP THE HOUSTON PRESS FREE... Since we started the Houston Press, it has been defined as the free, independent voice of Houston, and we'd like to keep it that way. With local media under siege, it's more important than ever for us to rally support behind funding our local journalism. You can help by participating in our "I Support" program, allowing us to keep offering readers access to our incisive coverage of local news, food and culture with no paywalls.
Make a one-time donation today for as little as $1.