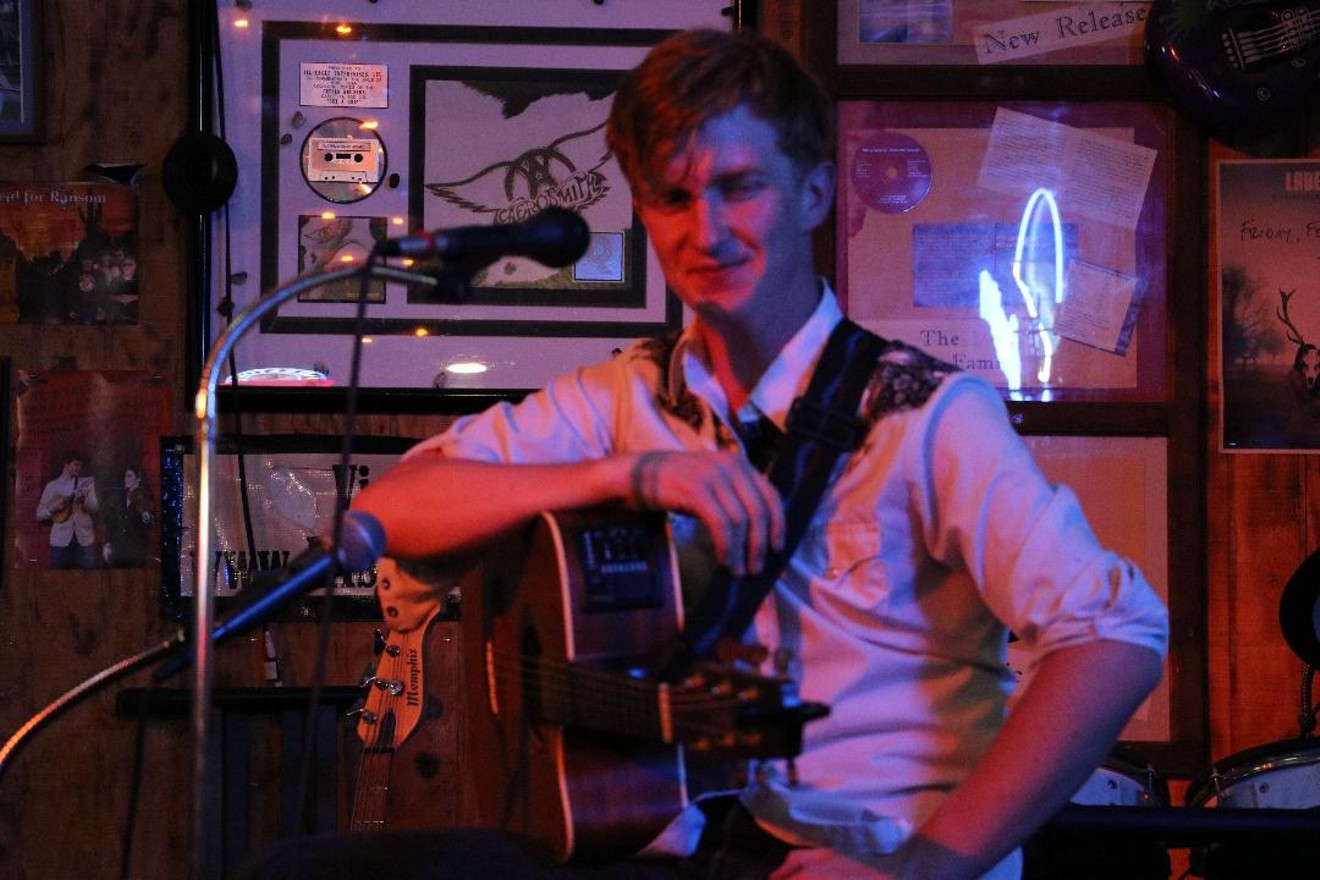 Mike Lee resisted his country roots until... he couldn't. Photo by Mark Johnson

Queens-based singer/songwriter Mike Lee has spent the last year and a half on his debut full length, Pick Me Up Café – but he’s been writing songs longer than he knew.

“I grew up in South Dakota and have this big country music background,” the stage actor says, “which I pushed back a lot as a kid. My first major influences were Dylan and the Beatles, and I liked all that old '60s rock. My family, the people who taught me and brought me up, they didn’t really like that stuff. It was more country music, The Eagles – but I didn’t, I kinda thought that was dad music, you know? But as I grew up, I knew you can’t run away from it any longer.”

Defining his style, Lee shouted out a few influences for the record, which began taking pre-orders through the artists Band Camp for a release on May 22. “I call this kind of music Cosmic American, which was a sort of phraseology that was coined by Gram Parsons of the Flying Burrito Brothers. The idea is that it’s an amalgamation of country music and blues music and folk music and rock and roll in one place, you know? He got famous playing with The Bryds, so there’s a major '60s rock influence on this. And to give a hat tip to the guy who just left us John Prine is one of my hugest influences ever, especially in the way he writes songs - not so much the music but the lyrics.”

The 30-year-old guitarist breaks down the origins of the album, which features an eclectic array of contributors including Tristan Moore on trumpet, Kevin Lloyd on piano, additional vocals by Emily Wold and Sara Ornelas on spoons.

“I had been writing a batch of songs about a year and a half ago – some of these songs are much older than that. I started finishing up the final ones about a year and a half ago. So I went home for Christmas and I have a buddy in Omaha [Tom May] who plays the steel guitar, the pedal steel. I’m a big country music fan, so I wanted to have some steel guitar on these songs, knew that from the jump. So I carved out a little time on New Year’s Day 2019 and we all went to my buddy’s house and did a little jam session.

"I intended to make a live demo of five of these songs, then come back to New York to shop them around. But when we finished the producer who was recording us that day liked it so much said he didn’t want us to give it to anybody else. He wanted to make this record.  I said that’s a pretty good deal, so we moved on with that.” Once Lee began to organize a creative team for the project, he recalls wrestling with the notion of recording the entire album live. “At first I thought it might be a live record, but as we got into the nitty gritty of producing it [that way], I realized I wanted a lot of polish on them,” Lee explains. “So we spent the next year emailing; we made this album postal service style.

"We would record, then send it to our producer who would integrate it into our master track. They would do jams, then we’d all trade notes via the internet, which kinda made the process take a little longer. I was gonna finish it up last summer, but then I got an acting gig in Chicago – and that turned out to be a great happy accident because there I wrote two songs to finish out the album, and one of those became the title track, The Pick Me Up Café. That’s an all-night café in Chicago, and I had a weird Tindr date there.”

One of Lee’s collaborators on this album came from an unlikely ally who became essential to the production of the finished product. “I was gonna start taking pre-orders for the vinyl [on National Record Store Day], that was the intention. But now that I’m kinda hamstrung at the moment, I decided I wanted to find a way to salvage this anyways. I had a friend I went to undergrad with named Rudy Jansen, a film student, and he co-wrote one of the songs – the only song that’s not all mine. He helped me co-write and it’s all about him. Rudy’s a great guy and when I sent him the demo of the song, I said: “Hey Rudy, I’m writing this song about you” because Rudy prints bootleg Grateful Dead T-shirts, and he always sends me one when he makes ‘em, so I have about 15 of these shirts.

"That inspired the song [Grateful Dead T-Shirt], so I sent Rudy a demo and Rudy in his way, this is very on-brand for him, he said: ‘I love the song, I’m very flattered, but I have a few notes for you.’ He became the co-writer that way! He wrote the second verse of the song, and he really helped me transform the song and bring it to a new level so I’m very grateful for it. Then on top of that, he jumped on to this project as my art director. He’s designing all our web assets and he’s designing the cover of the record.”

In addition to a digital download of the record itself, Lee promotes some swag that comes with the pre-order, courtesy of Jansen himself. “So on Monday, we’re gonna put out a T-shirt as well. Plus, we’re also gonna do this little coloring contest! So Rudy has done this little sketch of what the Pick Me Up Café would look like in his imagination, and we’re gonna send out a PDF with all copies of the pre-order that fans can send to us, and color and we’ll post them on Instagram.”


Also with the pre-order is a little bonus content, including an early version of demo material that will be heard in a more complete form on the full-length in late May. Not available in any form, Lee confirms, is his very first song written over 15 years prior.

“I wrote my first song when I was a freshman in high school. No, maybe even younger. 8th grade. I mean, I’ve been writing songs since I was a little kid, to be honest. But the first time I knew I was writing songs, I was at the river with my family, it was on the Fourth of July. We had all these families, all these friends of my mother’s family, this cool extended chosen family on this side. I developed this Fourth of July crush on this girl on the beach with us that day, and I went home to my grandparents’ house it was, and in my grandparents' basement I watched the Scorsese documentary No Direction Home, the Bob Dylan documentary.

"That was the first time it kinda hit me that you’re a song writer, dude. You just gotta write a song. I had been learning to play music, and I realized that’s sort of what I was made for. I went out and dug out paper and pen, and tried to write a song about the girl I had met that day. And that song doesn’t exist in any form today and I’m quite grateful for that.”

While new converts to Lee can hear the first two singles from the record on streaming now, those hungry for more of laid back guitar tunes are going to have to bide time until the debut full length drops on May 22. Thankfully, Lee has a little extra something to tide listeners over – and it comes packaged with a heartfelt political message.

“About a month ago I was laid off from my job in the city when the shut down started, and I had written a song about Medicare For All,” Lee shares. “I don’t want to say too much about this publicly, but a friend of mine has cancer, pancreatic. But he’s still working, because he can’t afford his health insurance and needs to work. I’ve had my own woes with getting health insurance in the last year, so I wrote a song for Bernie Sanders and Medicare For All called Don’t Let Me Get Sick This Year. When I got laid off, I wrote another song about the quarantine situations, so I released that as a b-side. So I have released an official release before, it was only two songs.”

So for those holed up with nothing to do, Lee understands – he’s right there with you.

Mike Lee's Pick Me Up Cafe is available for streaming and purchase on May 22 on mikeleelc43.bandcamp.com