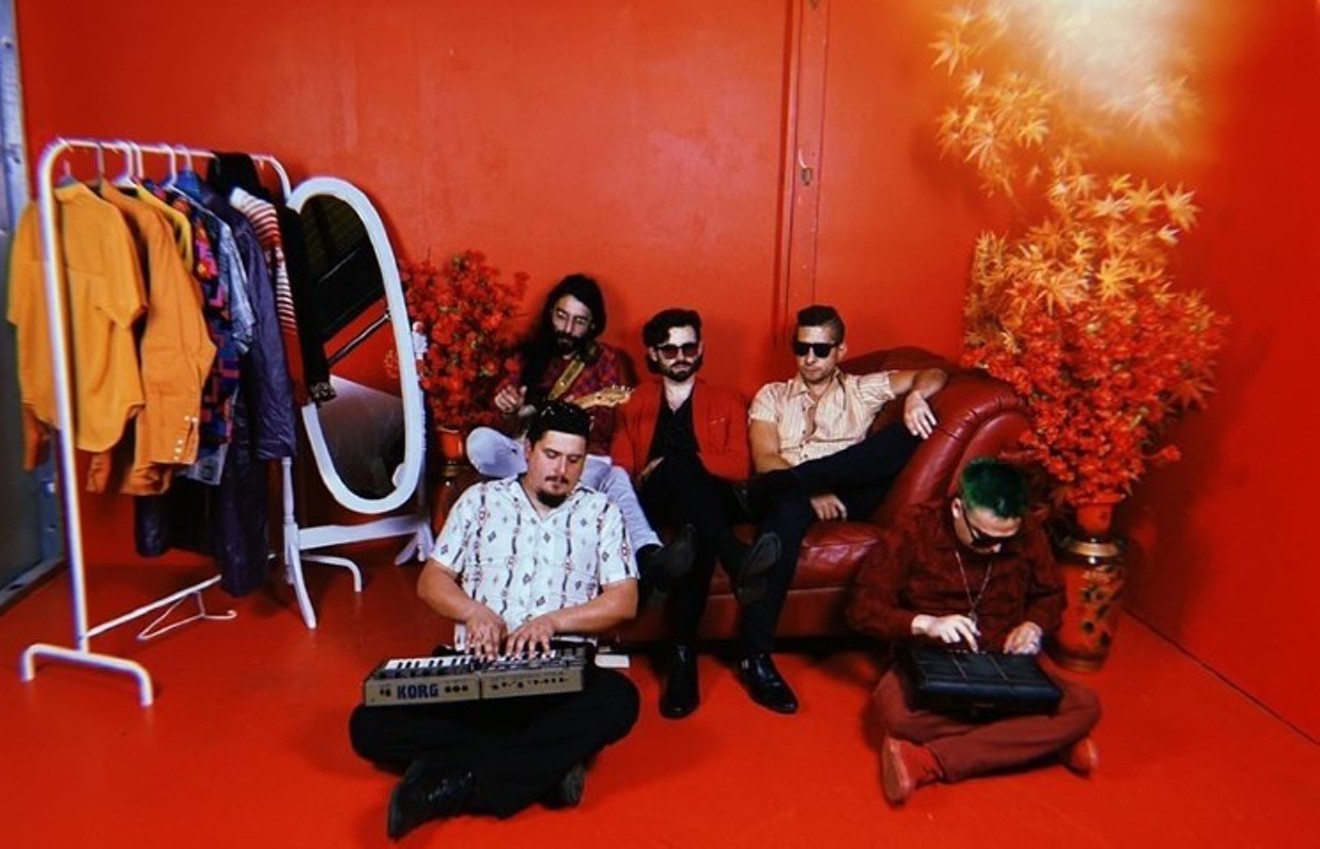 According to Darwin, every beast is subject to evolution, even a Handsomebeast. As a unique, musical specimen from Houston, the band formed more than a decade ago. It grew and thrived, the result of its own natural selection of guitar-driven funk rock delivered in titillating doses to adoring fans. But, as old Chuck suggested, adaptation is necessary to allow something to compete and survive in the world.

So, consider this an official farewell to Handsomebeast, the wildly talented creature we once knew, and an introduction to its evolved kin, Astro Inn. The band’s vocalist, Nick Serena, explained how the new project  creates a new genus of genius musicianship.

“We’ve had this band, Handsomebeast, for a long time, like over 10 years, and we’ve never stopped working on the thing religiously and that has even ramped up over the years to the point where we kind of matured, our sound dramatically matured, and we realized the new chapter was coming, so it was time to make an actual new band,” Serena said.

Astro Inn has nearly the same lineup as Handsomebeast, but Serena said the sound has more pop, hip-hop and soul sensibilities than Handsomebeast afforded its legion of fans. Serena promised that Astro Inn will still incorporate “the cool, funky guitar work that we’ve had in the past.” And, he said, there will be a theatrical component to Astro Inn, metered out by a series of videos and in live shows like an approaching gig at Wonky Power Live.

“We basically took two years to build an album from scratch, make all these high-quality videos and make sure we did justice to some more world-building than just being a band,” he stated. “I think we’re going to be leaking that stuff out over the next few months and we’re super hyped about it.”

The band’s name should offer a clue to Houstonians about how the new music will sound, Serena teased.

The band's lead single, "Venus in Retrograde," is a playful nod to its recent changes
Album art courtesy of Astro Inn

“It’s named after the infamous Astro Inn that was in the Heights – now torn down and gentrified quite a bit from what I’ve heard,” he said with a laugh. “That was kind of a famous, old, seedy Houston staple and we think that name really represents the world this music exists in. There’s some seediness to the lyrics, to the sounds that we make, it is definitely a post-midnight type of album and we think the visuals will represent that as well. And, we loved getting something that was distinctly Houston in there.”

Serena will handle lead vocals as he did for Handsomebeast, and plays a little more guitar in Astro Inn, alongside lead guitarist Peewee Ruiz. Tony Ortiz is the group’s keyboardist and they’re joined by new addition Sergio Vazquez Puglisi, who checks into Astro Inn from Soul Creatures as bassist. That exciting addition allows Jacob Rodriguez’s return to the drum set, his first love, which Serena said was a key move towards pursuing these new sounds.

“What we’re really psyched about is we built everything about this music from scratch. The recording studio, our home base, King Benny’s House of Sound, which we’ve operated out of for a long time, Jacob runs that recording studio and records a lot of other cool, local bands there. He really built that thing from the ground up with his dad. So, he built the studio where we built the album from scratch,” Serena explained.

“When people hear the album, they’re going to hear the level of detail that’s in it. There are going to be levels of mystery in it, you’re not going to know if a certain part is a guitar or synthesizer, or a drum machine or real drums. We paid close attention for well over a year making this new sound from scratch and it goes all the way next to the music videos, which we had a large hand in making, all the way down to the album art that’s going to come out.”

The first Astro Inn video was recently unveiled. It’s for the song “Venus in Retrograde.” That’s a bit of wink and nod since astrology buffs know it’s a bad idea to change one’s appearance when the love planet is in retrograde.


“The music was done by the time the lockdown came around. Now, the rest of it, the visual component, which we consider equally important or equally interesting, that was all lockdown based,” Serena said. “We even canned a couple of videos that we shot because we didn’t think they were up to par with the vision of what we wanted. Obviously, we had to get super creative with all that stuff because everyone’s budgets – our budget, I’m sure like everyone else’s - got destroyed by COVID.”

The video was shot by upstart filmmaker Felix Navarro.

“He does a lot of hip hop, he actually raps, and that’s how Jacob met him, Jacob’s been recording him for years, and now he’s really poured himself into the filmmaking game,” Serena said. “That was definitely a direct collaboration. We had the vision for this based on the studio that we saw and we figured, look, based on the sets we knew we had access to and the wardrobe we’ve kind of built for this album, we knew that this first single and this first music video could be like a series of vignettes that visually convey the world that Astro Inn lives in. To me, it’s like the theme song, it’s like the intro credits for Astro Inn. Think ‘Sanford and Son,’ but not that at all.”

Serena said there’s no set date for the full album drop. He did share the album title, but asked us to not share it. All we can tell you is it will definitely fit the vibe of the music. Withholding this info is just prolonging the foreplay. That’s how committed the band is to promoting this ethos.

“We really feel like we’ve created a world that sort of exists in this seedy, nighttime underground and the title kind of reflects where the lyrics go,” Serena said. “The shift in writing was significant and had kind of been brewing for a few years. We were always a band, with Handsomebeast, that was sort of jam based. Not in our songwriting, like we always took pride in writing tight songs, but a lot of them came from four or five guys jamming in a room together.”

He said the new iteration of the old band began a couple of years ago with individual members writing songs, bringing full demo tracks to the group “to kind of move it towards this sort of modern sound. We really wanted to blend electronic instruments with real instruments in a way that’s almost indistinguishable.” 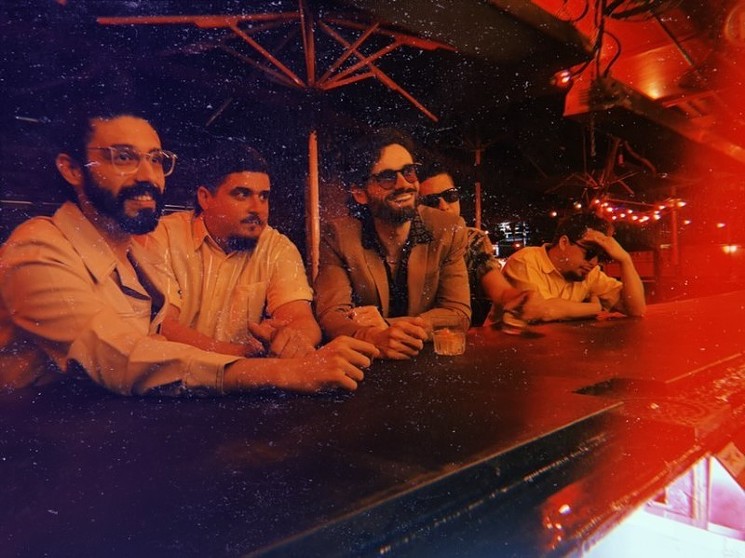 This is a known band that created a solid following, listeners who fell in love with the “space rock bump n grind” of Handsomebeast, fans who plastered the band’s identifiable “HB” stickers on whatever they’d adhere to around town. Were they concerned about rebranding after they’d gained so much musical capital here?

“We’ve always been really confident since we started making this album a few years ago that the people who liked us are going to love it,” Serena shared. “There were hints of these types of sounds all over our previous works. We don’t play reggae now or something, we’re not coming out with a country band. We’ve kind of taken the next step.

“It’s sort of like if you see some dude on the Rockets and he’s scoring 10 points a game right now, he’s going to come out and score 30 points a game the next year,” he continued. “He’s still good and everything you liked as a role player, but now he’s more fully formed. He knows who he is. And, I think that’s what we’ve found.”

While they’ve designed everything from blueprint to build-up, they do acknowledge other architects of this brand of band maturation – the David Bowies, St. Vincents and Gorillaz of the music world. Bottom line, according to Serena, is Astro Inn is just the next step in an evolution.

“The big thing I want to emphasize is the amount of hours that were put into this are borderline unhealthy. Everything everybody will see was built by scratch from us,” he reiterated. “I can’t wait to show what Jacob did in particular with the production on the album, what Peewee did with the artwork, what Sergio adds from a live perspective and then what Tony does as the ultimate utility player who makes everything sparkle and bump a little bit bigger. I think that’s what we’re really proud of and that’s why it took so long.”

The thing about evolution is it make take eons for anything significant to occur and then be followed by rapid, untamable progress. The band’s set its first live show for June 18 at Wonky Power Live. Serena said a follow-up album to the still-unreleased debut record is already fully written. After going dark on the Handsomebeast page for six months, fans have wasted no time finding Astro Inn’s social media pages to follow the new developments.

“I mean, this is everything to us. I’m completely up front, we want this to be our career. This is not a maybe thing, this is not like we’re gonna do this on the side. We’ve made a lot of sacrifices in our personal lives to get where we’re at with this thing. So, we’re extremely serious about it and we put in crazy amounts of hours and heart and soul into it. So, it really feels good when people recognize it," Serena said.

"We are so appreciative to everybody who has already reached out to us about the band. It means so much to us because we put so much into it, I mean that, and I’ll say that on behalf of all the boys.”

Astro Inn makes its live debut appearance Friday, June 18 at Wonky Power Live, 3534 Navigation. Uncle Tino opens the show. Doors at 7 p.m., $15.
KEEP THE HOUSTON PRESS FREE... Since we started the Houston Press, it has been defined as the free, independent voice of Houston, and we'd like to keep it that way. With local media under siege, it's more important than ever for us to rally support behind funding our local journalism. You can help by participating in our "I Support" program, allowing us to keep offering readers access to our incisive coverage of local news, food and culture with no paywalls.
Make a one-time donation today for as little as $1.