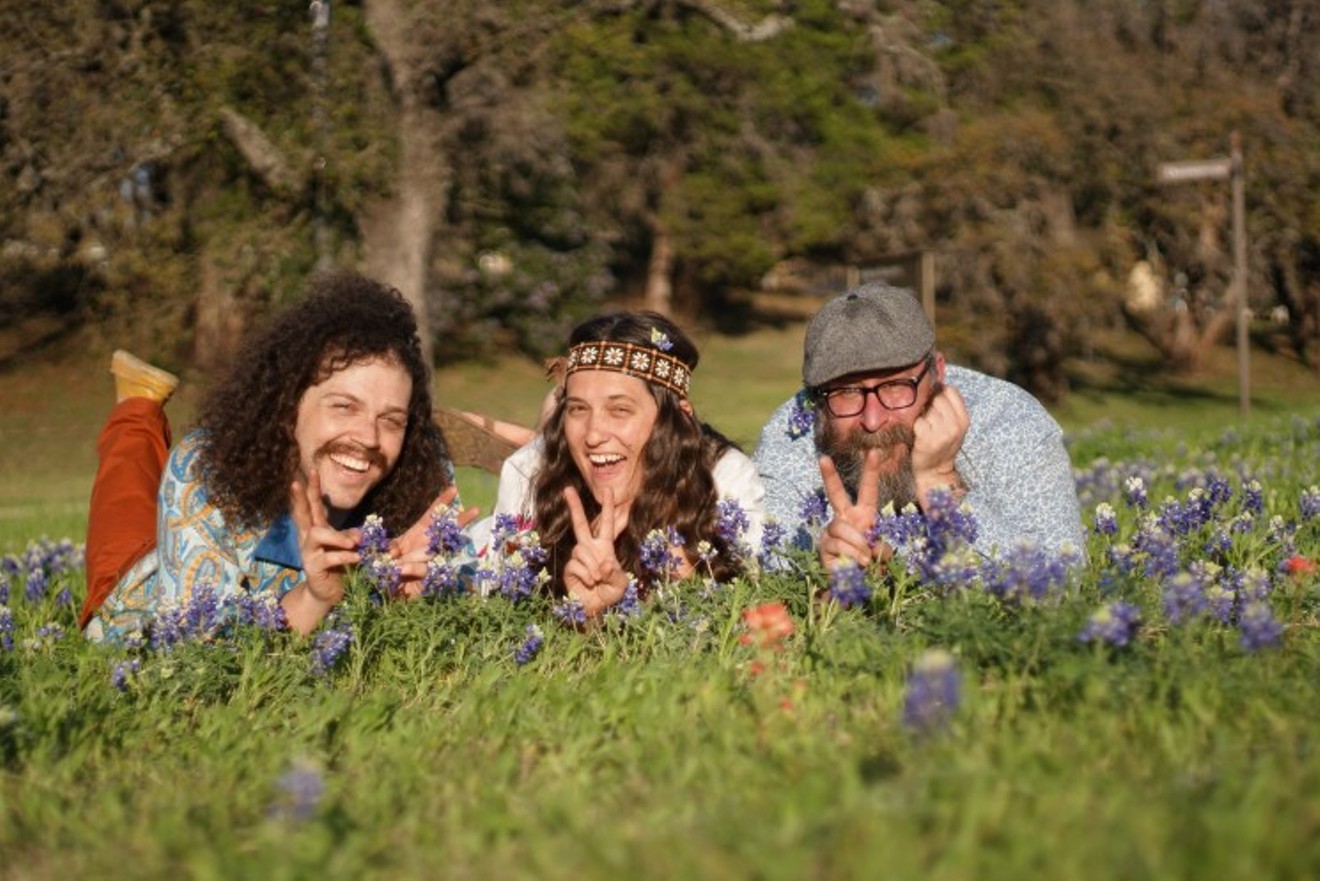 L-R: Kurt and Rosey Armstrong and Chris Thompson Photo by Kurt Armstrong, courtesy of Hans Gruber and the Die Hards
You can get a good read on a band by how it handles adversity. The pandemic created significant challenges for music groups everywhere, including Austin ska punk outfit Hans Gruber and the Die Hards. When chaos came calling in the form of a lineup change over members who refused to get the COVID-19 vaccine, the remaining members forged ahead with new music and sock puppets.

That’s right, sock puppets. You’re welcomed to bring your own or the band can provide you one when it plays the new Houston venue The End on Friday, April 29. The bill also includes Los Skarnales and touring acts Sgt. Scagnetti, The Wee-Beasties and Monkey. The show will also serve as a Houston album release of sorts for Hans Gruber and the Die Hards. It’s new album, With a Vengeance, releases May 3, right at the start of a monthlong tour for the group.

Besides sock puppets, the band includes real-life humans Chris Thompson on drums, vocals, theremin and ukulele, and Rosey and Kurt Armstrong. We chatted with the Armstrongs, husband and wife who play an assortment of instruments, most notably tenor saxophone (Rosey) and bass and trombone (Kurt) and also handle lead vocals on the new album’s 16 tracks.

“We started writing it well before the pandemic. We had a good chunk of the songs written, between me and Chris, before the pandemic,” Kurt said of the album, which is being released on Ska Punk International Records. “We went on the Ska Parade Tour in early 2020, went in to record and then the world shut down and we kind of had to piece it together throughout that. We kind of went in with the same process as always, we don’t like saying no to the songs, we like going all directions we possibly can.”

That meant using a toy piano found in the studio or adding theremin simply because the band had access to one. But, Kurt said, mostly it meant expanding Rosey’s role in the band.

“Rosey had joined officially full time before the last album but a good chunk of those songs hadn’t been written with sax in mind so that was secondary. On this one, I wanted to feature a female vocalist more prominently because that was already beginning to happen at the shows,” Kurt said. “So that’s another big difference, you’re beginning to hear much more of Rosey on the tracks.”


It’s a natural progression, as Kurt sees it. The band formed in 2014 and Rosey did session work on its 2017 self-titled release. She had more of a presence as an official band member on its second album, 2019’s Hans Gruber and the Die Hards 2.

“Those songs were definitely not written with me in mind, it was just certain songs. Like 'Tommy Westphall' is an example where I was like, ‘I hear it, I need to sing it. I know you guys don’t hear it, let me sing it in the mic and you tell me how it sounds.’ Which was a lot of this album, too,” Rosey said. “Okay, just let me sing this harmony and then you can tell me if it doesn’t work, but I’m pretty sure it’s gonna work.”

“With the split there was even more of that. Okay, how do we split this up between Kurt and I so that Kurt doesn’t have to sing the whole time?” she said.

The split was well-publicized, what the Austin Chronicle dubbed “Austin’s most fascinating case study in COVID-era band dynamics.” The band fired guitarist Hans Emanuelson and vocalist TJ Robinson in mid-2021 for refusing the vaccination when vaccines were widely available and required for many bands to play venues resuming shows. We asked what the band learned from that tumultuous time.

“I think I learned that there are certain personality traits that I probably could have picked up on a while ago, but at the same time, it’s never good to make those judgments so early,” Kurt said. “I think that being in a worldwide tragedy makes people make sometimes what we’d view as irrational decisions.

“I would say that there are parts that haven’t changed too much. Me and Chris did the bulk of the songwriting,” Kurt continued. “We had always had a tight, close working relationship with Chris, me and Rosey.”

“As strange as it is to say, and it could just be that three personalities are always going to be easier than five, and maybe it’s because we’ve had to sort of bond to get through it,” Rosey added, “as much as I believe that we made the right decision — and in retrospect there’s a lot of different things and I think it was the best for us for our own personal sanity —  it was still really hard, especially being a band that has always tried to not exclude different ways of thinking. It was really hard to even make the decision and the repercussions of it all have been hard as well. But I think we’ve come together and have almost become a lot stronger and have a closer bond. It almost feels easier.”


If the lead singles from the album are indicative, what won’t change about the pared-down band is its manic energy and inspired weirdness.

“One of our favorite things to do currently with the single that just came out, ‘No No Bronto,’ is hand out sock puppets, and then we just have a whole pit of people using sock puppets and singing along,” Rosey said. “It’s been really fun. In some ways that’s a silly song but I think because we have so much fun in the live show and it’s like just let the catharsis happen, sometimes the little messages do get lost.”

“It’s pretty evident, because we’re going with the naming scheme of all the Die Hard movies, With a Vengeance had to be the heaviest thing we did just because of the title. So, we did go in with a lot of these very heavy songs. We’d already gotten fairly heavy, but I think with this one we got even more so,” Kurt said. “And we balance that out with a bunch of songs that are not heavy at all.

“We’re all very fascinated by bizarre stories or weird facts from history,” he noted. “It’s that kind of fine line between reality and fiction, but always a good story. We have a song about a lake monster in Nebraska on there, but then we also have a song about the fact that the brontosaurus actually didn’t ever exist, and that’s a true fact. We have a song about our failing health care system, but also a song about credit cards being from Satan.”

“No No Bronto” might be the band’s fun dispelling of the brontosaurus, but it’s also a pointed commentary on science and truth, subject matter closely aligned to pandemic times. The album’s opening track, “Nothing Like a Good Old Fashioned Witch Hunt,” might also have some COVID-era relevance, we note. Anything to those being the two lead singles, we asked?

“It wasn’t intentional. It’s actually kind of funny in hindsight,” Kurt said. “When we were putting the album together we knew those two were going to have to be two of the lead singles but you’re actually dead right. They do address for us obviously some more immediate and personal issues, but actually existentially larger issues within the greater United States. I think that’s why it was good to lead with the two of those.

“I think that’s something we’ve always liked to talk about, is the kind of fascinating worldview or perspectives you’ll be taken aback by, that ‘How could anyone believe this?’ then you come to find out it’s not just a handful of Americans believing completely different from you, it’s literally half the United States. There is absolute truth sometimes but sometimes it feels like, ‘Shit, am I wrong?’” Kurt said.


The band has touring down to a science and will hit the Midwest in May, playing big shows in Chicago and Birmingham and lots of small towns that bring in big crowds along the way. The Armstrongs said Houston is a good place to get primed for those shows. They’re also both members of the bilingual ska reggae act Los Kurados and they’ve been trading shows with Houston acts a bit lately. They’re hoping to team the Die Hards with Swimwear Department in the late summer and further build on their connection to the city.

“I mean we always love going down to Houston. I think the last time we were there Los Kurados were playing. Los Skarnales put a show on with Shame on Me,” Kurt said. “Los Skarnales are great hosts. Every time we’ve gone down there and played with them it’s always been a good crowd and they’ve always made sure we got a good pay, so we’re always stoked to be with them. They have been big supporters of the scene and of the small guy, really.”

“Yeah, particularly Los Kurados,” Rosey added. “They came up here to play with Los Kurados I guess in June of 2021, so kind of the first show back at Flamingo (Cantina), and that was exciting that they asked us to come and play. As far as Hans Gruber, we haven’t been down or done a lot with Houston bands but we’re excited to go down this time.”

“Sgt Scagnetti, who is from Connecticut and did a 7-inch split with us, they’re gonna be there, so that’s kind of exciting,” Rosey said of this week's show. “We haven’t played a show with them since we released the 7-inch, so we’re excited about that, and then Monkey from San Jose, they toured with us early 2020 on that Ska Parade tour. Pretty much everybody is coming for Ska by SkaWest.”

Yeah, yeah, let’s get back to the sock puppets. Kurt said they resemble a long-necked dino and were first unveiled during last year’s trip to The Fest, a huge Florida punk music festival. Rosey said right up to the festival she was “cutting little felt tongues and glue gunning.”

“Yeah, the whole plan was to throw them out during ‘No No Bronto’ and get a nice sock puppet pit if we could and we did. It worked,” Kurt said. “And every single time since we bust out the sock puppets and people love it, it’s such a crowd interactive goofy little teaching tool.”