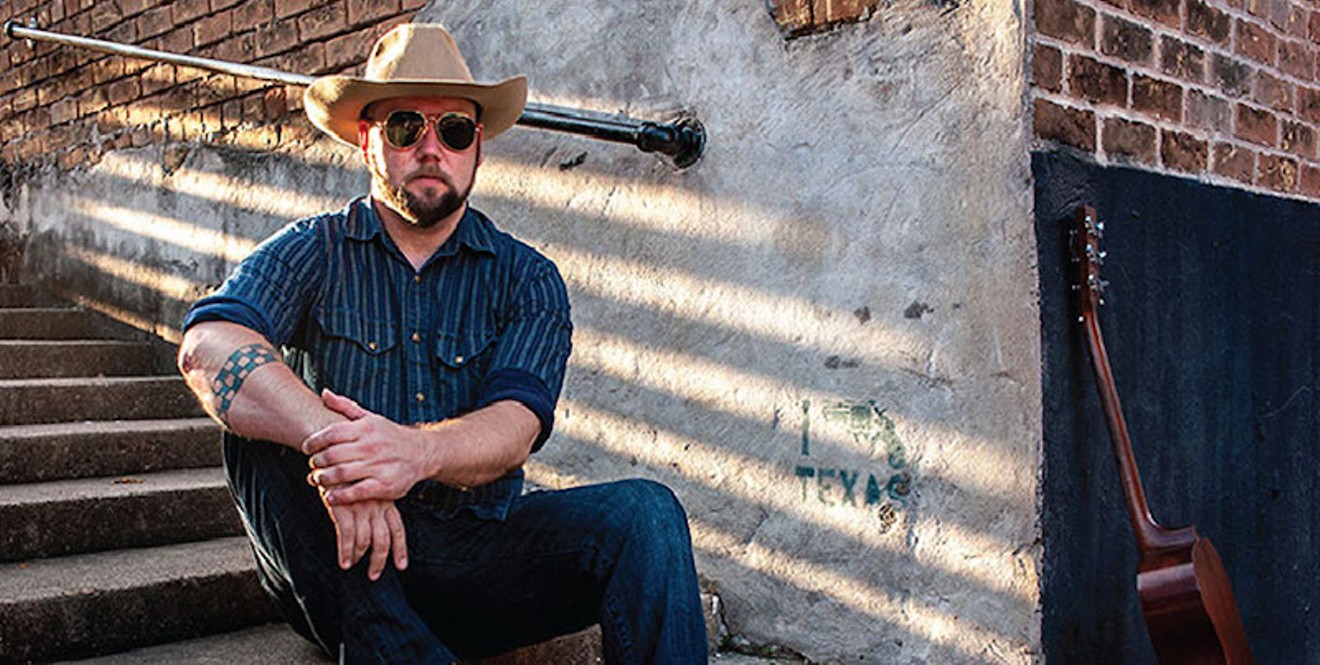 Kory Quinn will celebrate the release of his latest album Home of The Brave on vinyl at Wolfsmiths Heights on Saturday, July 24. Photo By Ray Redding Sr.
Releasing an album is always a process that takes time, effort and thoughtful decision making. Now factor in the COVID-19 pandemic, limited opportunities to play live and the backed up vinyl plants all over the United States and it only becomes an even more complicated process.

For singer-songwriter Kory Quinn’s latest release Home Of The Brave, all of these factors came into play. Quinn released his album digitally in October but will celebrate its physical release on vinyl with a performance this Saturday, July 24 at Wolfsmiths Heights.

Quinn will be joined by fellow Houston based singer-songwriter Alex Coba. Beer and spirits will be provided by 8th Wonder Brewery and Wolfsmiths Heights will also be drawing a winner as they raffle off a restored 1984 BMW R65.

This release has been a long time coming but Quinn doesn’t mind. “It’s actually working out because things are opening again. People want to go out and do stuff. I also made some connections with local entrepreneurs like Wolfsmiths Heights and they’ve become buddies and supporters.”

Home Of The Brave is a spectacular album, well deserving of its celebration on a full moon night. The album is rife with layers of deliberative instrumentation fitting with the song's lyrical subjects. The entire album plays like a multi-faceted story with different characters all sharing the same stage.

“They were all songs written over the last five years in regards to the direction of past administration and how their day to day business really affects everyone all the way down to the most granular. I think there was a lot of agenda at the top of that list to create chaos for nefarious purposes really,” says Quinn.

“They were all songs written over the last five years in regards to the direction of past administration and how their day to day business really affects everyone all the way down to the most granular."

“All these songs came out of my impression of where we were headed. I don't know how we get out of it other than just trying to be as humane as possible to each other. The selfishness is just rife.”


Home Of The Brave kicks off with the powerful “I Hear Them All” where Quinn takes the Old Crow Medicine Show song and makes it his own, adding verses reflective of current issues, a choir of voices and a roaring trumpet, a thematic element which runs throughout the album connecting side A to side B.

“Side A is more of the truth to power kind of thing and then the flip on B is embodying more the person who is in charge and how they are just prone to fucking up because we put them on pedestal and not only on pedestals, but under magnifying glasses.”

Though the songs reflect the major issues of the past four years, none of the challenges facing the world are actually new and Quinn does not expect humanity to turn over a new leaf just because there is a new administration in charge.

“I hate to use that old cliche, but be the change within your own sphere of influence. That's the best you can do.”

Home Of The Brave boldly takes on the complex and serious subjects of global warming, police brutality, corruption, suicide, patriotism, racism and failed immigration policies forcing listeners to think about where they stand and which characters they most relate to.


“All Quiet On The Front” was originally written about Quinn’s brother who is a Marine and served in Afghanistan but in a broader sense, the song tells the story of so many of our country’s veterans.

“The front that they put on to everyone publicly is that everything is fine,” says Quinn about the meaning of the song's title. “But underneath it's like a cacophony of a battle going on with their identity. War zones really just up end people's identities and flip them inside out and then they come home and everyone else has been living their lives.”

“Veterans everyday have to wake up and not only relive the war, but relive coming home. Everyday they’ve got to wake up to a world that existed and moved without them and didn’t really think of them,” he adds.

For Quinn, who moved to Houston only two years ago from Portland, Home Of The Brave is a stark contrast from his previous album The Blueroom which was a lighter and gentler album. “Every single record I want to treat differently, as a new artistic expression,” he says. “If the pandemic didn’t happen, there's no way I would have been able to complete this thing.”

Kory Quinn will perform with Alex Coba for the Home Of The Brave vinyl release show on Saturday, July 24 at Wolfsmiths Heights, 636 W. 26th,7 p.m., free.  Records will be available at Cactus Music.
KEEP THE HOUSTON PRESS FREE... Since we started the Houston Press, it has been defined as the free, independent voice of Houston, and we'd like to keep it that way. With local media under siege, it's more important than ever for us to rally support behind funding our local journalism. You can help by participating in our "I Support" program, allowing us to keep offering readers access to our incisive coverage of local news, food and culture with no paywalls.
Make a one-time donation today for as little as $1.