Lettuce is: Nigel Hall (keys/vocals), Adam Deitch (drums), Adam Smirnoff (guitars), Erick "Jesus" Coomes (bass), Eric Bloom (trumpet), Ryan Zoidis (sax). Photo by Alex Varsa
Part of the appeal of having SiriusXM satellite radio and its scores of music channels (with even more on the app) is that pretty much every single band or performer past or present will be played on at least one station. For the Boston-bred Lettuce, that channel is Jam On.

But while that is the genre that the funk-leaning group would fall under in a record store category bin, drummer Adam Deitch also thinks the label — as many people understand it — is somewhat limiting.

“How do I answer this politically correct?” he ponders. “I look at it like jamming is something that happens in all styles of music. What the jam band fans represent today are [people] who were tired of what they were hearing on the radio in three-minute songs. They wanted an improvisational moment that lasts maybe five minute or seven minutes or 12 minutes. And we love that because we love to stretch and keep people dancing and the vibe rolling.”


And rather than just noodling on their instruments with no direction, Deitch says that what Lettuce and other jam bands perform are more akin to “creating spontaneous compositions.”

“We’re not just flying off the seat of our pants. There are 12-minute James Brown songs and 15-minute Miles Davis songs. Jam [music] just doesn’t encompass the Grateful Dead. There are a lot of other styles of music in that category. Look at Weather Report!”

Current Lettuce members Deitch, Erick “Jesus” Coomes (bass), Adam Smirnoff (guitar), and Ryan Zoidis (sax), first played together informally in 1992 as teens while attending a program at the Berklee College of Music, along with Sam Kininger (sax) and Eric Krasno (guitar). The six then reconvened as an actual band while undergrads in 1994.

The name Lettuce famously comes from their admonition to local club owners to “let us play.” In 2002, they released Outta Here, their first of to date five studio records, though there are hundreds of live recordings of the almost all-instrumental band. The current lineup includes Deitch, Coomes, Smirnoff, Zoidis, Nigel Hall (organ/piano/vocals) and Eric “Benny” Bloom (trumpet). Dietch also leads an offshoot group called Break Science that plays more electronic music. But for Lettuce, the power has always been in the funk.

Adam Smirnoff, Ryan Zoidis, Erick "Jesus" Coomes, Nigel Hall, Eric Bloom, and Adam Deitch.
Photo by Alex Varsa
“Funk is our goal and our life’s blood. Our heroes are people like Bootsy Collins and Earth, Wind & Fire and James Brown,” he says. “When we were all at Berklee, our love of funk is what brought us together. Locking into a groove is the basis of our inspiration, a solid bass line and we go from there.”

As for playing with the same three other members in the band for more than 25 years, he says there’s definitely some musical telepathy going on.

“We have our own language. We’ll play the same thing or go into the same thing at the same time. There’s a magic when you’ve been playing music with your best friends for so long,” Deitch says. “Even the two guys who have been with the band only seven or eight years, what happens when we’re close is amazing. There’s a lot of synergy.”

And while the band puts all of its love shows up on the Nugs.net website – and it’s these recordings that their hardcore fans appreciate most – Deitch says listeners should not be so quick to belittle the studio records just because they’re not “live,” the preferred setting for jam band fans.

“Yes, there are brand new things every night and each song has a constant evolution. But we also love making [studio] records,” he says. “The songs are in their raw form there. It’s square one, bare bones. The original melody and groove and tempo, but they become something else when played live, and it’s all part of the process.” 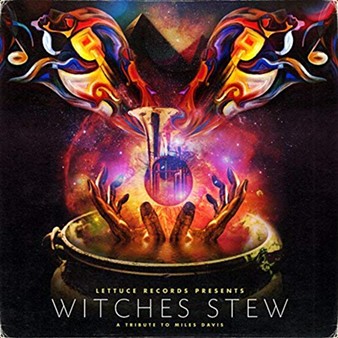 Cover from Lettuce Records
Their most recent record is 2017’s live Witches Stew in which they Lettuce-up seven songs from the catalog of Miles Davis, including the entirety of the In a Silent Way LP. Even though it was more of a seat-of-your-pants effort.

“That was Eric Bloom’s idea. We’re all die-hard fans of Miles, especially the ‘70s funky period. He was sort of the godfather of the jam scene on the other side from the Grateful Dead side,” Deitch says of the record recorded live at 2016’s Catskill Chill Festival in Lakewood, Pennsylvania.

“Eric had this idea to do this at a show at 1 p.m. that day. We weren’t super prepared and hadn’t rehearsed, but the recording ended up capturing some magic.”

Lettuce also has an already-busy 2019 planned, beginning with the short “Vibe Up” tour with the band Ghost-Note, a new studio album in the spring, and more (and more…) road miles racked up.

Finally, when it comes to playing Houston, Deitch is surprisingly enthusiastic, both about the growing jam band scene here and some local names that they hold in high regard.

“Houston is one of the greatest musical cities of all time!” he says. “The scene in Houston has really developed over the past ten years with artist like Chris Dave and Robert Glasper, and Eric Harland.” Deitch adds that he’s also a fan of what Beyoncé has done and that one of Lettuce’s most important early mentors was the Houston-based drummer Mark Simmons.

“We love playing Houston – because we never know who’s going to walk in!”

Lettuce plays 8 p.m. on December 28 at Warehouse Live, 813 St. Emanuel. Bobby Sparks II opens. For information, call 713-225-5483 or visit WarehouseLive.com. $22-$25.
KEEP THE HOUSTON PRESS FREE... Since we started the Houston Press, it has been defined as the free, independent voice of Houston, and we'd like to keep it that way. With local media under siege, it's more important than ever for us to rally support behind funding our local journalism. You can help by participating in our "I Support" program, allowing us to keep offering readers access to our incisive coverage of local news, food and culture with no paywalls.
Make a one-time donation today for as little as $1.