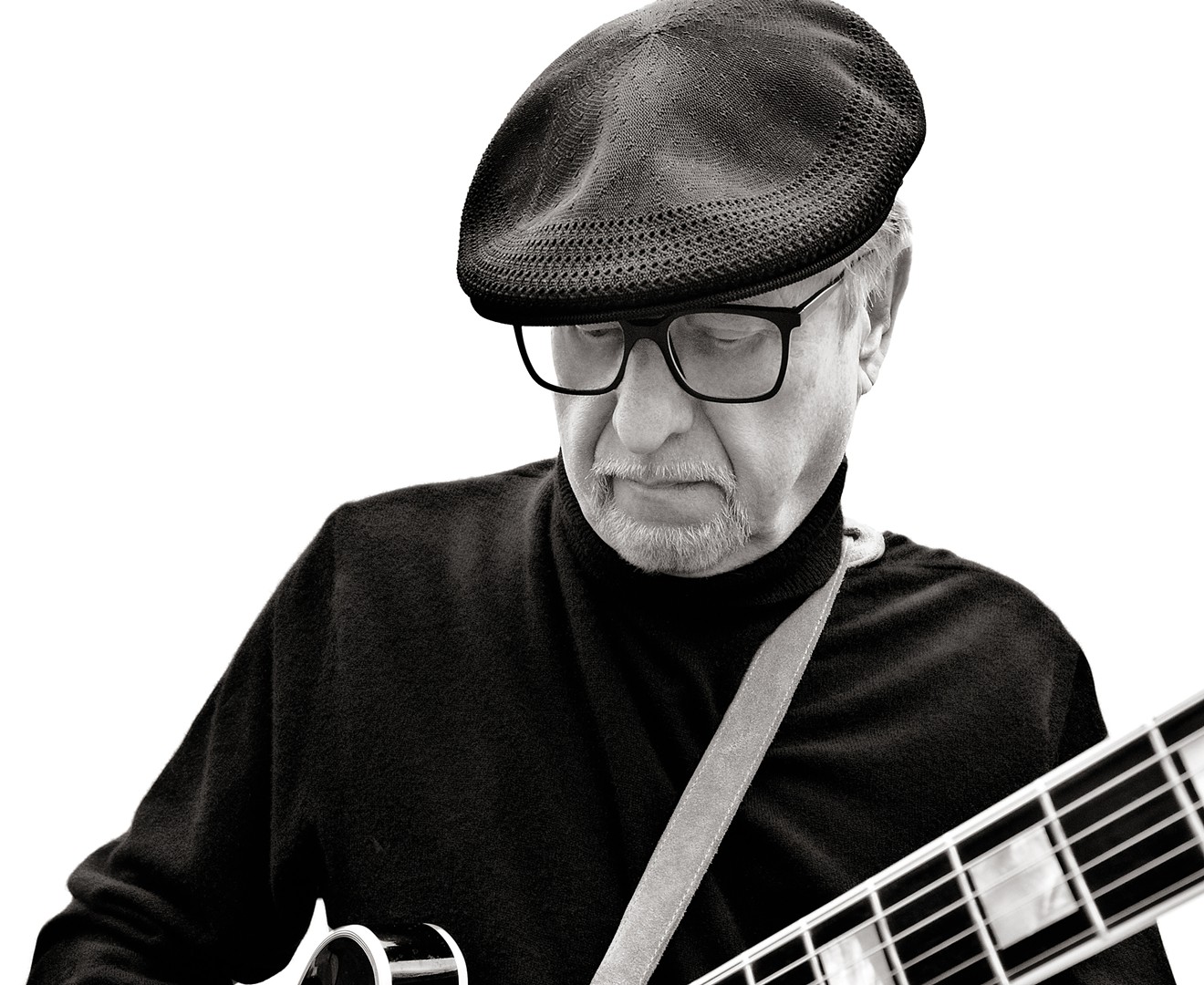 At 78, former Funk Brother Dennis Coffey still gigs weekly in his beloved city of Detroit. Photo by Doug Coombe/Courtesy of Omnivore Records
It sounded like the greatest theme song to a gritty ‘70s cops-criminals-drugs movie that never came out. But in 1971, guitarist Dennis Coffey’s funky, rocking, slashing instrumental “Scorpio” was a million seller, hitting No. 6 on the Top 40. And it’s one of the few tunes by a white act deemed hip enough to be played for gyrating bodies on TV’s “Soul Train.” Credited to Dennis Coffey and the Detroit Guitar Band, it was a smash for a man who was best known for his work as a session player.

“Scorpio” appears – albeit in a much different sounding version – on Coffey’s new record, Live at Baker’s (Omnivore Recordings). It also features altered covers from jazz players Freddie Hubbard, David Sanborn, Jimmy Smith, Miles Davis, Wilton Felder, and Brother Jack McDuff, along with the standard “Moonlight in Vermont.” And there’s the Temptations’ “Just My Imagination,” which pays tribute to both Coffey’s time at Motown as part of the Funk Brothers house band and his own distinctive work on the original track. Dennis Coffey in the 1970's.
Photo courtesy of Clarence Avant - Interior Music Corp.
Just don’t think that the rest of his Live at Baker’s band – Demetrius Nabors (keyboards), Gaelynn McKinney (drums) and Damon Warmack (bass), knew exactly where Coffey would take them and the material.

“That recording was a moment in time. What I would do is get a chord sheet and give it to the musicians and we’d just count it off and see where it went!” the 78-year-old Coffey offers. “It was just organic. I never play a song the same way twice, and it’s a different feel every time we play it.”

And while he’s played on stage and in studio in Memphis and New York and Miami, as well as lived in Los Angeles, Detroit is and was his unshakeable home base.

“Every city has its own vibe, but [Motown founder] Berry Gordy told me a few years ago that he could have never founded the label in any city but Detroit,” Coffey says. “Music is in the DNA of this city. You can still go out and hear live music every night of the week.”

That includes music by Coffey himself. In addition to this documented show at Baker’s Keyboard Lounge, he has a standing Tuesday night gig of more than a dozen years at the city’s Northern Lights Lounge. And as Live at Baker’s can attest, Coffey is equally at comfort playing blues, jazz, R&B, rock, and funk.

Coffey says that his versatility comes from his 25 years as a session musician. “Every day at Motown our job was to read a master rhythm chart and arrangement correctly, and then add something to it. And we had to do one song an hour and make them a hit,” he recalls.

The identities of the Funk Brothers were largely unknown (and uncredited on liner notes). More recent times have given them the long-overdue accolades they deserve, including as the subject of the well-received 2002 documentary Standing in the Shadows of Motown. Coffey will to this day occasionally give talks at the Motown Museum in the studio’s original location.


Picking up the guitar in his early teens, Dennis Coffey played on sessions before joining the Royaltones, who had a couple of minor hits. But his real rise came after joining the Funk Brothers in 1967 during a time of transition at Motown.

That’s his guitar heard on scores of hit songs, including “Cloud Nine” and “Just My Imagination” (with Coffey’s famous intros to both), “Psychedelic Shack,” and “Ball of Confusion” (the Temptations), “Someday We’ll Be Together (Diana Ross and the Supremes), “War” (Edwin Starr). At other labels he’s heard on “Band of Gold” (Freda Payne), and “In the Rain” (the Dramatics)—the latter with another famous, shimmering guitar intro.

His use of echo effects and a wah-wah pedal brought a contemporary, very ‘60s sound to Motown, working with producer Norman Whitfield who also wanted to shake up the label’s formula and sound.

“Norman Whitfield was a master at dynamics. The first session I ever did there was for ‘Cloud Nine’ and he wanted to experiment, so I put the wah-wah pedal on the intro, and he said ‘that’s what I want!’” Coffey says. “Two weeks later, I was recording it with the Temptations. I was his go-to guy to get where he needed to go. I had the effects, and I could play both the R&B stuff and the psychedelic rock.” 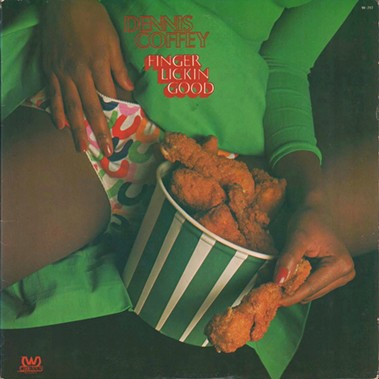 Westbound Records Album Cover
But solo hit “Scorpio” remains his calling card, and Coffey recalls the song’s origin. “I had a Sony tape recorder in my basement that was kind of new where you could overdub on tracks. Producer Mike Theodore and I were writing pieces for 50 instruments including strings. And then I said ‘I’m gonna sit down and write and have this concept of a guitar band.' I played the 10 [demos] for Mike and he said ‘let’s record an album.’"

He adds that he wrote the parts out for three guitars in three sections, so he and the band put fuzz on the guitars and sound like horns. "We overdubbed each section of three guitars to produce nine guitars," Coffey says. "I also played a Fender bass through a wah-wah pedal to sound like a trombone. That was me, Joe Podorsek, and Ray Monette. If you count my bass part it was nine guitars and one bass." Bob Babbitt (bass), Pistol Allen and Uriel Jones (drums), Earl Van Dyke (keyboards), and Jack Ashford (tambourine) rounded out the Detroit Guitar Band.

Of Coffey’s ten solo albums from 1969-1978, one does stand out a bit – albeit not for the music. The cover for 1975’s Finger Lickin Good might make even the Ohio Players blush, and would definitely not fly in today’s society.

“That wasn’t my choice!” Coffey laughs of the, uh, artwork. “It was kind of suspicious. I didn’t design it or anything. But I learned in the past don’t mess with covers because the art director will screw you over and make sure that album doesn't come out for a year!”

Finally, while Coffey has not had extensive touring in Texas, he did spend time in the state from 1960-61 while in the U.S. Army in the 101st Airborne Division. Coffey says had his basic training at Fort Hood before being transferred to Fort Sam Houston to train as a…medic??

“I was the best shot in the company, and they said I needed to be a medic!” Coffey laughs. “But I remember you had that River Walk there down in San Antonio. That was impressive. And I was driving over this hill in the early morning and you could see the Alamo. That was pretty hep!”
KEEP THE HOUSTON PRESS FREE... Since we started the Houston Press, it has been defined as the free, independent voice of Houston, and we'd like to keep it that way. With local media under siege, it's more important than ever for us to rally support behind funding our local journalism. You can help by participating in our "I Support" program, allowing us to keep offering readers access to our incisive coverage of local news, food and culture with no paywalls.
Make a one-time donation today for as little as $1.