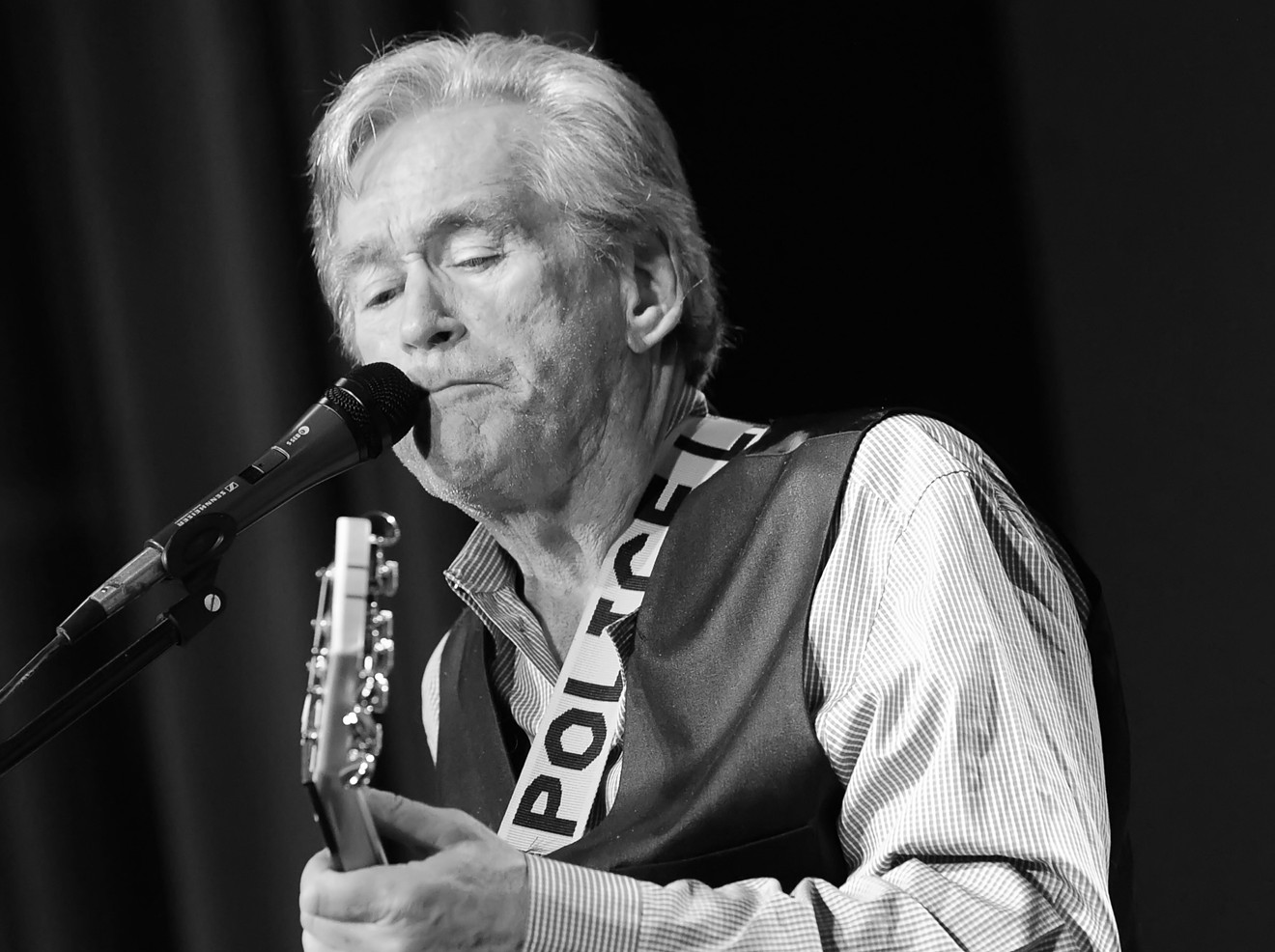 Bill Champlin's new record was partiallly inspired by a sea change in his outlook on life after some significant life challenges. Photo by Craig Carreno/Courtesy of O'Donnell Media Group
Bill Champlin is on the phone calling from his home in Santa Barbara, California. And while it’s ostensibly to discuss his new solo record Livin’ for Love—available digitally from Imagen Records and physically from BillChamplin.com—he first has something to say about visiting our fair city’s environs.

“My wife and son and I just drove to Houston for Christmas. And that’s a long ass drive!” he laughs. “Hell, California is pretty much locked down, so we went to Texas on a whim.” It turns out that his wife, singer/songwriter Tamara Champlin, grew up in Friendswood and graduated from Friendswood High School before attending the University of Houston, so they visited her family for the holiday.

Imagen Records cover
Livin’ for Love is Champlin’s latest effort in a very varied career that spans more than 55 years for the singer and multi-instrumentalist. And it’s a generous one for listeners. The 14 tracks – all written or co-written by Champlin – mostly clock in at the five to six minute range, with the Japanese edition including two additional songs.

Touching upon rock, jazz, funk, soul, and Champlin’s favored R&B sound, the sheer quantity of material is at least partially due to the extra creative time he was afforded with the pandemic.

“I couldn’t go anywhere or play live, so it was time to get to work. It’s that way for a lot of musicians. I think there will be more albums released in 2021 than children born nine months after the [1977] New York blackout! And I’m really proud of this record,” he says.

Champlin also notes that a serious prostate cancer scare and extensive treatment a few years ago, along with the death of his son from esophageal cancer around the same time, helped influence the record and sharpen his focus.

“It kind of changed my whole viewpoint. When you’re in that kind of scene, your list of things you care about gets quite a bit shorter, and the list of what you don’t care about grows a lot longer. And I put a lot of that into the songs,” he says. “But of course, there’s also a lot of ‘Oh baby, you’re hanging out with other guys’ R&B stuff. But that’s not personal!”

Which is good news for Tamara, who also sings and co-writes several songs on Livin’ for Love. But her husband is quick to squash any thoughts of nepotism. “She’s an ass-kicking singer and a great writer. This isn’t a Linda or Yoko thing!” he says. The couple will often be joined on the road or in the studio by their son Will, a singer/musician himself who placed third on season five of The Voice in 2013.

“A lot of my solo stuff is pop and craft oriented, but this one goes deeper. It’s more art than craft oriented,” he continues. “People can’t touch each other anymore with keeping six feet apart, so the only way to do that is through music and art and poetry.”

Bill Champlin onstage with Chicago in 2008.
Photo by Craig Carreno/Courtesy of O'Donnell Media Group
One song that has a decidedly contemporary subject is “Losin’ Ground.” Written by Champlin and Greg Mathieson, it’s about political and social divisions in our country that have been inflamed in recent years, and even more so given events of the past few months and even days.

“Everybody is promising everything right now and nobody is going to keep those promises. I try to stay out of politics, because it’s become such a cancel culture,” he says. “And everybody is pointing the finger at everybody else. People find there’s always someone else to blame [for problems], and then do it loudly. I think you can make your same point, but do it in more uplifting, spiritual, and quiet way.”

Growing up in Marin County, California, Champlin’s musical influences came from both nearby San Francisco and Oakland, though it was the soul and R&B music of the day which really grabbed him. A January 1, 1963 matinee show by James Brown at Sweet’s Ballroom in Oakland was a turning point, and the teen Champlin would shop for Wilson Pickett and Lou Rawls records at Berkeley’s legendary Reid’s Records.

His first band of note was the Sons of Champlin, a San Francisco-based rock group that featured horns and a heavy jazz influence which formed in 1965.

And while other area bands of the late ‘60s like the Grateful Dead, Santana, Jefferson Airplane, and Big Brother and the Holding Company with Janis Joplin did (and still do) get the lion’s share of attention, it’s often the “second tier” bands like the Sons, Moby Grape, and Quicksilver Messenger Service which produced even more interesting music. But the Sons’ namesake leader suggests that their lack of greater success was somewhat of a self-sabotage.

“We had the opportunities. But I always say that with the Sons, when opportunity knocked, we answered the phone instead!” Champlin laughs. “We didn’t know what opportunities were! We were so busy smoking dope, and we thought the world would beat a path to our door.”

Champlin would continue in the ‘70s and early ‘80s to be extremely busy as a session vocalist/player and songwriter, working with Elton John, Boz Scaggs, Amy Grant, Patti Labelle, Neil Diamond, Kenny Rogers, and even idol Lou Rawls. He co-wrote the big hits “After the Love Has Gone” for Earth, Wind and Fire and “Turn Your Love Around” for George Benson.


But it would be his nearly three-decade tenure with Chicago as a keyboardist/singer that casual listeners most know him for. He joined in 1981, and was the lead vocalist on the 1988 hits “Look Away” (which hit No. 1) and “I Don’t Want to Live Without Your Love,” as well as the duet with Peter Cetera “Hard Habit to Break.” He performed an acoustic version of "Look Away" in 2016 on Great Day Houston.

Interestingly, he found out from an original member of Chicago that their late singer/guitarist Terry Kath once showed up at a band rehearsal in 1969 with a copy of the Sons of Champlin’s Loosen Up Naturally record and insisted they all listen to it in its entirety, and immediately. Kath was a fan of their guitarist Terry Haggerty’s experimental approach to playing.

However, Champlin’s time in the band ended acrimoniously when he was fired in the middle of a summer 2009 tour with Earth, Wind and Fire. In interviews over the years, Champlin has said he was treated by some original members as more of a sideman than equal contributor, and that they were not happy he was pushing the band to create more new music and also pursuing an occasional concurrent solo career.


When Chicago was inducted into the Rock and Roll Hall of Fame in 2016, it included only the seven original members, which left Champlin out. And he (like Peter Cetera), chose not to participate in the 2016 band-produced career documentary Now More Than Ever, though it did include an on-screen quote from him with some of his grandmother’s advice of the long-held adage “If you can’t say something nice….” Champlin does still perform occasionally with original Chicago drummer Danny Seraphine in his California Transit Authority band, and post-Cetera vocalist Jason Scheff makes a guest appearance on Livin’ for Love.

A conversation with the now 73-year-old Champlin is also a mile-a-minute tour through music history, touching on ‘60s soul greats, the Righteous Brothers, Kool and the Gang, KISS, Alice Cooper, Sly Stone, Paul McCartney, Level 42, and two new newer acts he encourages people to check out: the Dirty Loops and Jacob Collier. “You’ll find when you talk with me, if there is a tangent, I’ll drive on it!” he laughs.

Of course, Bill Champlin can’t tour to support Livin’ for Love right now and doesn’t see it as a possibility in the real near future. But he is hopeful.

“With the vaccines, we’ve got a possible shot at this stopping. But then as soon as those came out, there was suddenly another strain. And this is been so politicized, I can’t tell what’s real and what isn’t,” he says. “But this is a story about science, not politics. If this thing stops COVID, it needs to get to everybody as fast as it can.”

For more information on Bill Champlin and Livin’ for Love, visit BillChamplin.com
KEEP THE HOUSTON PRESS FREE... Since we started the Houston Press, it has been defined as the free, independent voice of Houston, and we'd like to keep it that way. With local media under siege, it's more important than ever for us to rally support behind funding our local journalism. You can help by participating in our "I Support" program, allowing us to keep offering readers access to our incisive coverage of local news, food and culture with no paywalls.
Make a one-time donation today for as little as $1.