Ex-Raspberry Scott McCarl on the Power of Power Pop 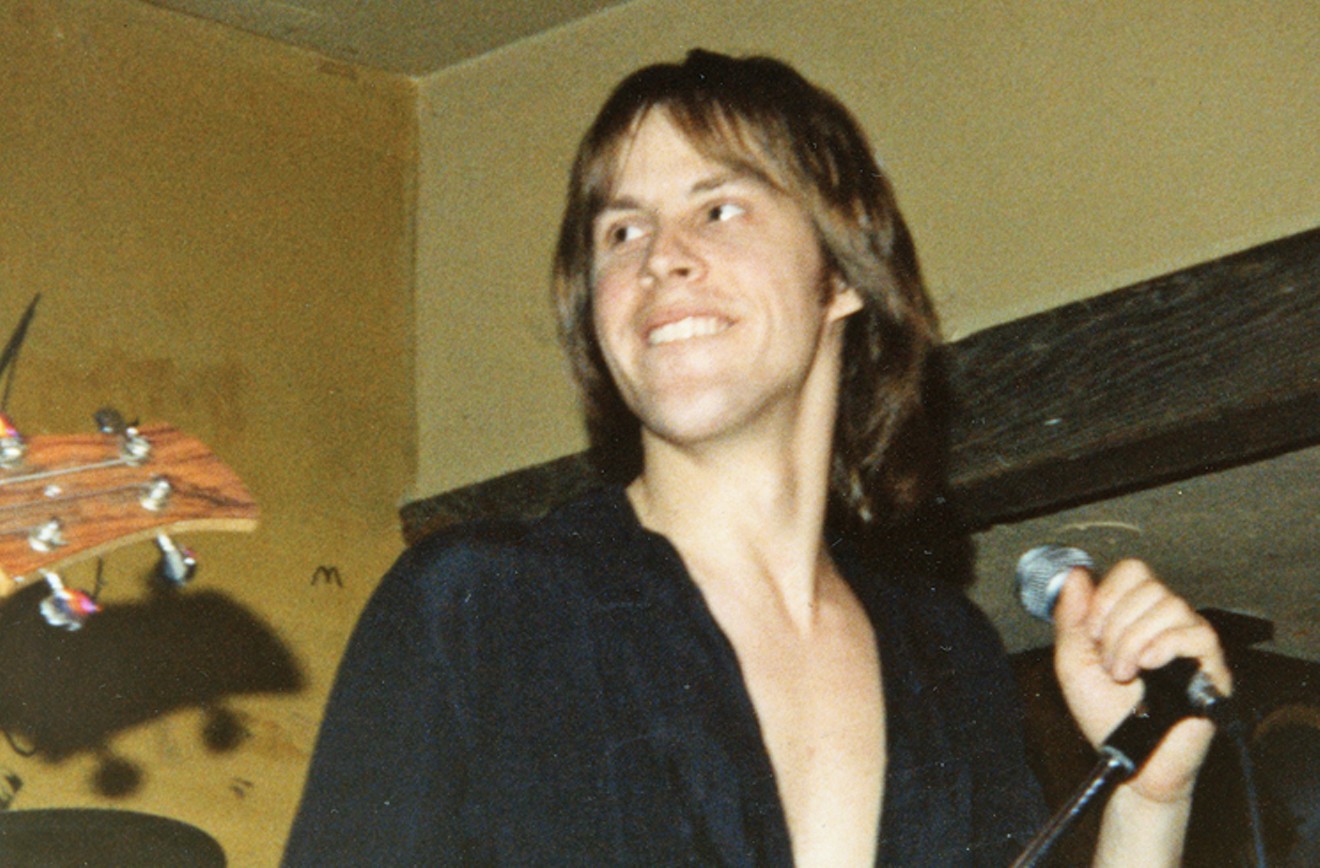 Scott McCarl onstage in the 1970s. Photo from the Scott McCarl Collection
In the multitude of musical genres, aficionados of Power Pop are among the most detail oriented. Whether it’s dissecting output from classic groups (Big Star, the Jam, Shoes, the Knack) or more recent bands (OK Go, Jellyfish, Fountains of Wayne) the often bright and upbeat music is a bridge between the two worlds of its title.

One of the most successful Power Pop groups of the 1970s golden age was Cleveland’s the Raspberries,
click to enlarge 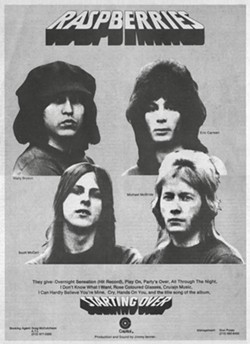 Promo for the "Starting Over" LP.
Advertisement
who churned out AM hits like “Go All the Way,” “I Wanna Be With You,” “Let’s Pretend,” and “Overnight Sensation (Hit Record).”

That last track was from the band’s final album, 1974’s ironically titled Starting Over. Playing bass and adding some vocals on it was newest Raspberry Scott McCarl, and he has his own definition of the term.

“Well, the Beatles were Power Pop!” he says via Zoom from his home. “Once the ‘70s got going with its batch of bands, that name started getting attached. But it just means that you’ve got a good melody, jangling guitars, a bit of harmony and they’re generally happy songs.”

In fact, McCarl’s has his Beatles-on-Ed Sullivan moment like so many other performers who saw those appearances and 1) had no clue that playing this type of music could even be a career option and 2) decided to do just that with their lives on the spot.

“That was instant for me. I was 13, which was a perfect age. I didn’t know how to do it, but it looked like fun,” he adds. “I already had some musical [ability], so I was at least on first base at the time. But you watch that performance and think we’ve lived 60 years since then and it’s so tame. But at the time, the Beatles seemed like they were from another planet with the hair and the accents and the high heels and the whooo-hooo. It was the whole package.”

But it’s Scott McCarl the solo artist who gets the spotlight on the new anthology Play On (Liberation Hall Records). The 13 tracks on CD feature most of his 1997 solo debut of the same title, unreleased tunes that stretch back as far as the 1970, and newly recorded songs from just last year. And two of them either directly or indirectly pay tribute to the Fab Four. 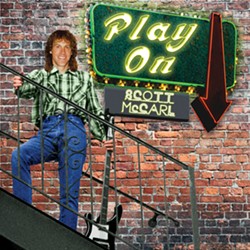 Record cover
Talks between McCarl and the label originally began about just reissuing the original Play On but morphed into more of a “best of” project coming out in both vinyl and CD, in slightly different versions (the CD version is out now, the vinyl delayed by supply chain issues).

As he relayed in a recent interview with It’s Psychedelic Baby Magazine, in 1973 while McCarl was in a band, a friend handed him a copy of the Raspberries 45 single “Go All the Way.” Blown away by the sound, he sent a demo of some of his tunes to the Raspberries leader, singer/guitarist Eric Carmen, with a note looking for feedback that also said “If you ever need a bass player…”

Some months later, Carmen contacted him to express admiration for the music and offer encouragement. And some time after that, called McCarl to audition for the now-empty bass slot in the group. He and fellow new recruit Michael McBride (drums) joined original members Carmen and Wally Bryson (guitar) to record Starting Over. And Rock and Roll Dreams come true.

“Isn’t that amazing?” McCarl says. “I sent that tape off and some time went by and nothing came of it, but it turns out that [Eric] just didn’t have time to get back to me. I think he had in mind at first just producing me.”

And the Raspberries put the new boy to use. McCarl ended up writing or co-writing with Carmen five of the record’s 11 tracks, and even sings lead on “Play On,” their tune about the fast and hard rock-and-roll-lifestyle. But the album’s title was more of wishful thinking. After a tour to support the record and one hit single, the band broke up the next year.
“Eric wrote the hits and sang the hits and had a vision, but he wanted it to be a democratic thing, a band. And that’s why he felt I would fit in so well. The other guys [in that earlier lineup] were getting a little blasé about it,” McCarl says.

Still, when the end came for the Raspberries just 18 months after McCarl joined, it wasn’t totally unexpected. He says they were “very tight” for the first six months before things got “creepy around the edges.” 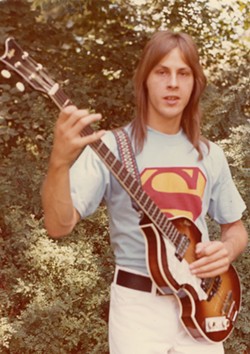 Super Scott McCarl
Photo by Cher K. Lane
“I have good memories of it, and some bad ones if I sat down and thought about it. I think about it as that bright sunset you see before it’s gone,” he says.

Though the songs on the current anthology Play On stretch over more than half a century, there’s remarkably little wear on McCarl’s voice over the decades—though that was touch and go for a bit. About three years ago he had his thyroid removed. But to do so, the surgical procedure brought a scalpel very close to his vocal cords.

“Me and all my friends and family were holding our breath to see what would happen after. And I was raspy for a few months,” he says. “But then I just sat down and started singing ‘Hey Juuude.’ And I said, ‘It’s coming back!’”

As for bass influences, Paul McCartney is at the top of the list. But he also adds Motown’s James Jamerson of the well-used studio unit the Funk Brothers. “I don’t play in his style, but he was really able to get in under the song and move it along. Then he’s stop for just a second and you’d feel it,” he says. “That guy was just amazing.”

Today, McCarl has several projects in the works including recording two ballads that he considers “among the very best of his songs,” along with putting down a tune called “Radio Music,” the meat of which came from part of a song already recorded by a friend.

As for Houston, McCarl remembers playing an NEC music industry conference here in February 1974 and still carries one specific memory from the day.

“Being from Cleveland, we were excited about the warm weather—it was 65 degrees! So, we all put on our bathing suits and ran into the [hotel] pool and started working on our tans!” he laughs. “We were waiting for that sun, and you just didn’t get that in Cleveland!”
KEEP THE HOUSTON PRESS FREE... Since we started the Houston Press, it has been defined as the free, independent voice of Houston, and we'd like to keep it that way. With local media under siege, it's more important than ever for us to rally support behind funding our local journalism. You can help by participating in our "I Support" program, allowing us to keep offering readers access to our incisive coverage of local news, food and culture with no paywalls.
Make a one-time donation today for as little as $1.