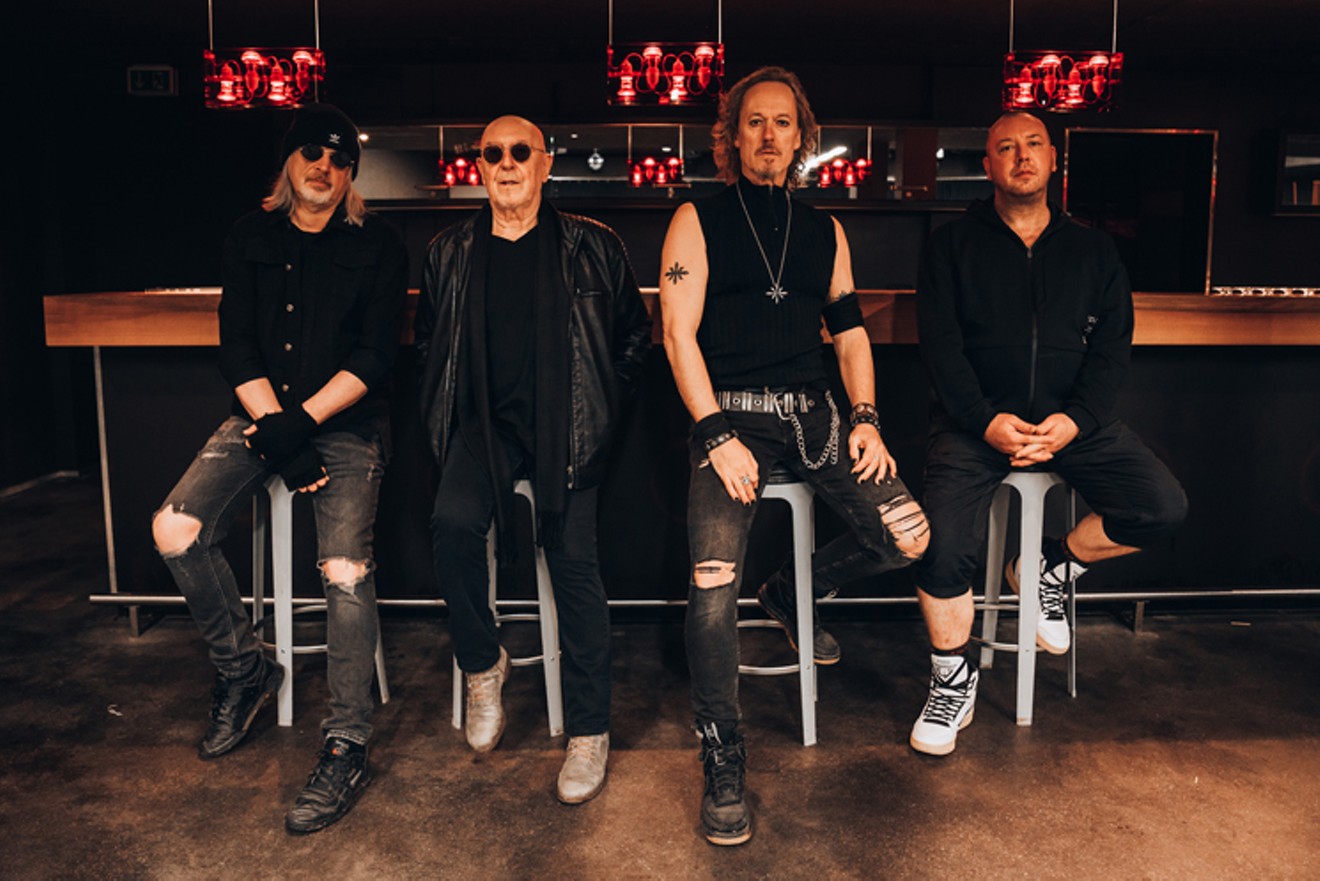 Nazareth in 2022: Jimmy Murrison, Pete Agnew, Carl Sentance and Lee Agnew. Photo by Lewis Milne/Courtesy of Freeman Promotions
Ah, COVID, you bastard! You have not been a friend to so, so many Classic Rock bands who had ambitious and wonderful plans to celebrate a 50th anniversary of their founding or first album in 2020…or 2021…or 2022.

That includes Scottish hard rockers Nazareth, whose self-titled debut dropped in 1971. But 75-year-old bassist Pete Agnew—the sole remaining original member—sees the proverbial light at the end of the tunnel.

Record cover
“It’s hurt a lot of bands’ 50th anniversaries. And us, we’ve had to put dates up on the website and then take them down all because of the COVID. It will be the summer before we get kickstarted,” he says via Zoom from his home in Scotland.

“I know that there in America it’s almost back to normal. But it’s not like that here in Europe, where they still restrict audience sizes. We’ve still got the masks in Scotland and promoters are nervous about putting any shows on. But we’ll make up for it!”

Not that the band didn’t just sit on their arses the past two years. The proof is in their new 25th studio record, Surviving the Law (Frontiers Music).

Like “Strange Days” and “Mind Bomb” which will bring to mind respectively—at least to many—Donald Trump (“Go ahead and act like a martyr/But you can’t handle the sting”) or organizations like QAnon (“Generate another lie/Consume the disenfranchised/Every day brings a new fear/And let them hear what they want to hear).” Both were written by Lee Agnew.
“Lee’s a bit like that – he doesn’t trust anybody!” his father laughingly offers. “His lyrics are always great. But he’s left it obtuse enough to mean something to one person and something else to another. Even when I’m talking to him, I’m not sure who he means! And his ‘Let the Whisky Flow’ is about Scottish nationalism and not trusting the government. He’s a very, very angry man!”

There are also songs about good times, romance gone bad and the pandemic (“Waiting for the World to End”). But the elder Agnew has the last word on Surviving the Law with the “You Made Me,” which he wrote and sings himself.

“I always wanted to do a bluesy, jazzy, R&B type thing,” he says. “This was album number 25 and I sang a song on our first album, “I Had a Dream,” when I was 25. So, 50 years later, I thought it was time to do it again! And I did the vocal on my 75th birthday!”
In terms of anniversaries, though, Nazareth has always pegged their origin as 1968. That’s when the original quartet of Agnew, Dan McCafferty (vocals), Darrell Sweet (drums) and Manny Charlton (guitar) and were all first in the same band together.

In 1961, Agnew started a show band called the Shadettes, taking lead guitar and vocal duties. He was later joined by Sweet, and then McCafferty. They mostly played covers of other people’s hits in local and nearby clubs. Not exactly helping their touring prospects was the fact that they hailed from the tiny town of Dunfermline in Fife. Members came and went, until just the quartet with Charlton was left.

By that time, Agnew had switched to bass—mainly because their earlier bassist always failed to show up for rehearsals. “The other guys said ‘Well, it’s only got four strings and you can manage that.’ And I thought I’d give it a go,” he says. “But it wasn’t like I woke up and said, ‘I’m going to be a bass player!’”

Ready to get out of the house and play: Jimmy Murrison, Pete Agnew, Carl Sentance and Lee Agnew.
Photo by Lewis Milne
Knowing they needed a new name, group members were sitting in a hotel bar in 1970 when the Band’s “The Weight” came over the sound system. Its first line was “I pulled in to Nazareth/Was feeling 'bout half past dead.” Agnew thought “Nazareth” would be a great name, and thus it was.

The band soon scored a record deal with an actual company. Which back then was a much bigger achievement than it is today, according to Agnew. Especially for a band so far removed geographically from the big city of Glasgow, much less London where the UK music biz was really centered.

“In the clubs, you didn’t make records, you played everybody else’s. We were human juke boxes! So having an actual contract was a big, big deal. And making our own record was incredible,” Agnew says. “Today, kids can make a record on their phone. I was at a club awhile back and the band said they wanted to do a song from their third album. I thought ‘Third album? They’re playing in a bar!’”

A steady stream of albums and tours upped Nazareth’s profile through their ‘70s and early ‘80s hard rock heyday. So it’s something of an irony that their biggest hit—“Love Hurts”—is actually a ballad.
A cover of a tune originally done by the Everly Brothers and written by Boudleaux Bryant, Nazareth gives it an epic sound with McCafferty’s gravelly, pleading vocals sending it over the top. In early 1976, it hit No. 8 in the U.S. More recently, its soundtracked commercials for products ranging from Gatorade and Nissan to Aspercreme.

One huge fan of the song and the band was a certain singer born William Bruce Rose, Jr., who later changed his first name to Axl. His band, Guns ‘n’ Roses, did some early gigs with Nazareth, and the vocal similarities between him and McCafferty did not go unnoticed.

So when Rose wed girlfriend Erin Everly in 1990, he really wanted one thing at his wedding. And while it’s been widely reported that Nazareth “turned down” his request, Agnew says the real story is much different.

“That’s a story that’s keeps growing legs!” he laughs. “Axl was getting married to Don Everly’s daughter. He loved Dan’s voice and ‘Love Hurts’ and wanted him to sing it at the wedding. He didn’t want to [book] Nazareth – we weren’t going to be the wedding band! But we were in Russia or Poland at the time and Dan just couldn’t do it. But it would have been nice!”

McCafferty retired from playing live with Nazareth in 2013 due to a diagnosis of COPD which often left him gasping for air. Agnew still keeps in touch with him—they live about five minutes apart in different Scottish villages—but they haven’t visited in person during the pandemic in order to keep the singer’s health protected.
One person he keeps most in touch with is Mick Box, guitarist and founding member of UK rockers Uriah Heep, whose history with Nazareth has often intertwined. When Box spoke to the Houston Press for that band’s 50th anniversary, he had clear memories of McCafferty’s meticulous clothes ironing system on the road.

Agnew roars with laughter when he’s told that. “Yeah, yeah! I remember that and getting a few ironing lessons from him! Dan was always very tidy!” he remembers. “Mick is like me—he’s the last original guy left in his band. But we’re on the internet with a bunch of other [older classic rock musicians] like us. And we send each other stupid stuff and jokes all the time.”

Finally, asked if there’s any pressure or extra weight he feels about the band’s now 50+ year legacy and being the “last man standing” on stage, Agnew says there’s only one reason he hasn’t hung up that bass just yet.

“I simply refuse to go!” he laughs. “There have been many different lineups of the band. And I’ve got to tell you, I’ve enjoyed every one and had really good fun. And I really believe that last two albums that we’ve done are two of the best Nazareth albums of all time! So I’m not just going off and away.”

For more on Nazareth, visit NazarethDirect.co.uk
KEEP THE HOUSTON PRESS FREE... Since we started the Houston Press, it has been defined as the free, independent voice of Houston, and we'd like to keep it that way. With local media under siege, it's more important than ever for us to rally support behind funding our local journalism. You can help by participating in our "I Support" program, allowing us to keep offering readers access to our incisive coverage of local news, food and culture with no paywalls.
Make a one-time donation today for as little as $1.