Loverboy today: Paul Dean, Matt Frenette, Mike Reno, Ken "Spider" Sinnaeve, and Doug Johnson. Photo by Mick Rock/Courtesy of Wolfson Entertainment
When Loverboy’s self-titled debut came in in October 1980, the prevailing media format for music was the vinyl LP. But given what he saw shortly thereafter, guitarist Paul Dean probably didn’t expect that the Canadian rockers would be releasing Loverboy in a 40th anniversary edition on vinyl as well!

The band was in Japan promoting their second album, 1981’s Get Lucky. A rep from the Sony Corporation took them to their headquarters in Tokyo, where they met the company’s president. He excitedly ushered Loverboy into his office to show off what at the time was one of the world’s first CD players, to handle the new shiny disc format that Sony had developed in partnership with Philips. 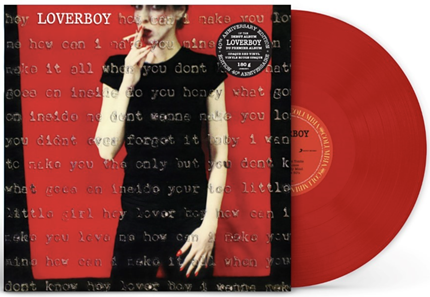 Sony Music record cover
“I thought ‘This is definitely the future!’ I wasn’t thinking it would only be temporary. Downloads and streaming rule these days!” Dean laughs from his home. The just-released anniversary edition of Loverboy comes in a limited edition red vinyl. Unfortunately, the man who had a writing credit on each of its nine songs won’t be able to hear it for himself.

“I don't even have a turntable anymore!” he says. “But I know that people appreciate the fidelity of a good turntable and cartridge and the quality of vinyl. Our manager, who’s an audio nerd, first brought it up to us. And when I listen to the record on Spotify, it still sounds good!”

Loverboy would hit No. 13 on the U.S. Billboard charts and spawn two hits with “The Kid is Hot Tonite” and “Turn Me Loose” (whose video—like many others to come from Loverboy—would later be in constant rotation on the fledgling MTV). Other tracks include “Prissy Prissy,” “Teenage Overdose,” “It Doesn’t Matter,” and the appropriate “Lady of the ‘80s.”

Dean recalls that by the time the band, which included himself, Mike Reno (vocals), Doug Johnson (keyboards), Scott Smith (bass), and Matt Frenette (drums), got into the studio, they were raring to go. Despite the fact that had only been together for less than a year.

“We were pretty ballsy back in those days, totally confident. Failure was not an option and we were going to go for it,” Dean says, noting that the Loverboy didn’t even have a record deal yet, and had already rejected a couple of “lame offers,” told it would take three albums for them to reach any level of success.

“At the time we had had a lot of recording experience, and we were pretty tight as a band. Our managers at the time got a good deal on the studio time,” Dean says. “I’m a perfectionist and the overdub king, and I’m sure I drove everybody pretty nuts. I was the guy there first thing in the morning and the last to leave at night.”

Dean also gives credit to producer Bruce Fairbairn, engineer Bob Rock, and assistant engineer Mike Fraser for helping the band greatly during the process. “I was impressed with how organized Bruce was. He’d have a chart on the wall with the nine song titles, and boxes below them that would say ‘guitar’ or ‘drums’ or ‘keyboards,’ and he’s just check them off as we finished them,” he says.


Dean also notes that Fairbairn was a “great diplomat” who could diffuse any tensions between members who might think that a bandmate’s work might need another take by delivering the request himself. And he says that Rock has called him just in recent days to congratulate Dean on the anniversary and reminisce about the record.

Loverboy also had a distinctive cover, created with some old school photo technology. Canadian artist Barbara Astman was hired for the job, and she took a Polaroid selfie of herself. She immediately put the photo in a typewriter as it was developing, and punched in the words for the album’s track “Little Girl” across it before tossing it into a freezer.

Asked as to why the band wouldn’t feature themselves on the cover of their debut, Dean notes it wasn't until their third album that they did so. “But we made sure we had our photo on the back of Loverboy,” Dean says. “In our best new wave clothes—the reds and blacks and yellows of our newly adopted color code!”

After recording was completed and the band started shopping around the results, it wasn’t long before executives at Columbia Records heard it and offered the band a contract. For his part, Dean was grateful for their support, and says that band members were happy to do anything to get the word out about their music. And if that meant doing radio station drop-ins, newspaper interviews, or record store appearances in cities during the day before the show that night, so be it. 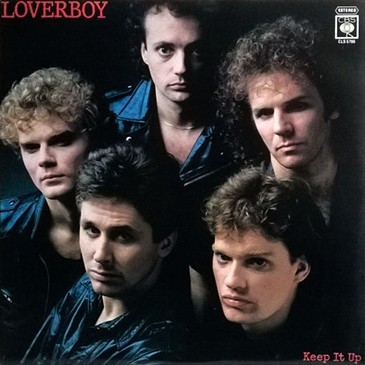 Loverboy's 1983 album "Keep It Up." Clockwise from top: Frenette, Dean, Smith, Reno, and Johnson.
Album cover
Dean says the band used to have an ad hoc baseball team called the “Weekend Warriors,” and they’d sometime play against record company execs and employees. And while he questions his own athletic ability at center field, it’s where he learned who the most important people to connect with on the other team.

“The most important people in the game were the sales people! That was a great lesson. They had a lot of power to [push and promote] the music, so we made sure we paid attention,” Dean says. “And whatever they wanted us to do, we did it. Back when there were actual albums to be sold!”

It was Loverboy’s quickly-released next record, 1981’s Get Lucky, that would really break them even further in the U.S., spinning off hits like “When It’s Over,” “Lucky Ones,” and “Take Me to the Top.” But it also included what’s become their anthem, “Working for the Weekend” (and the audition song for Chris Farley and Patrick Swayze as wannabe Chippendale’s dancers in a memorable Saturday Night Live sketch).

Along the lines of Journey’s “Don’t Stop Believin’” and Bon Jovi’s “Livin’ on a Prayer,” “Working for the Weekend” has transcended being just an '80s hit into something that means more to listeners. Plus, it gave (and still gives) radio stations something to blast out on Fridays at 5 p.m. across the country.

As singer Mike Reno told us in 2018 about the song he co-wrote with Dean and Frenette, Dean’s original title was “Waiting for the Weekend.” Reno suggested a one word change in the title that started with the same letter, but it made all the difference.

“I said if that’s what he [wanted], then sure. And it really worked out. Thanks, Mike!” Dean laughs. He says he knew the song was special from the time the band first began playing it, even before it was recorded, during a weeklong engagement at a bar on Vancouver Island one Saturday night.

“The band was secondary, and we were playing [originals]. People were just interested in meeting each other and talking, and we couldn’t reach them for two entire sets.” Dean recalls. “But in the third set, we played that song, and the dance floor that had been empty the whole time suddenly was packed! I don’t know if it was the booze or everybody getting loose, but I like to think that it was because of the song!”


Of course, the Age of Coronavirus has scuttled any of Loverboy’s plans to celebrate the 40th anniversary of their debut with live shows. Dean says he’s been keeping busy writing music for the band and his solo career, as well as working on screenplays. Loverboy performed a couple of songs remotely and in their individual homes and studios (brought together by the magic of video and technology) for some of their charitable causes, but that’s about it.

The current lineup includes original members Paul Dean, Mike Reno, Doug Johnson, and Matt Frenette, with Ken “Spider” Sinnaeve on bass since 2001. Scott Smith was involved in an accident the year before while sailing off the coast of San Francisco when a large wave capsized his boat, and he was lost at sea.

As for 2021, Dean says he’s itching to get back onstage. “I’m doing just fine for being a forced recluse! But I miss the crew and the fans and the band and crunching my guitar,” he says. And like Reno, he’s thinking of putting out some new Loverboy music, but on their website only, mainly for their more diehard fans.

“We know at this point we’re not getting on the radio with any new music, so we’d just like to do something for the fans,” Dean says. “We know there’s people today who will take off of work, get a babysitter, drive 400 miles to see us at a show, stay in a hotel, then drive back. We want to thank them for their loyalty.”

The 40th anniversary reissue edition of Loverboy is out now. For more on the band, visit LoverboyBand.com
KEEP THE HOUSTON PRESS FREE... Since we started the Houston Press, it has been defined as the free, independent voice of Houston, and we'd like to keep it that way. With local media under siege, it's more important than ever for us to rally support behind funding our local journalism. You can help by participating in our "I Support" program, allowing us to keep offering readers access to our incisive coverage of local news, food and culture with no paywalls.
Make a one-time donation today for as little as $1.