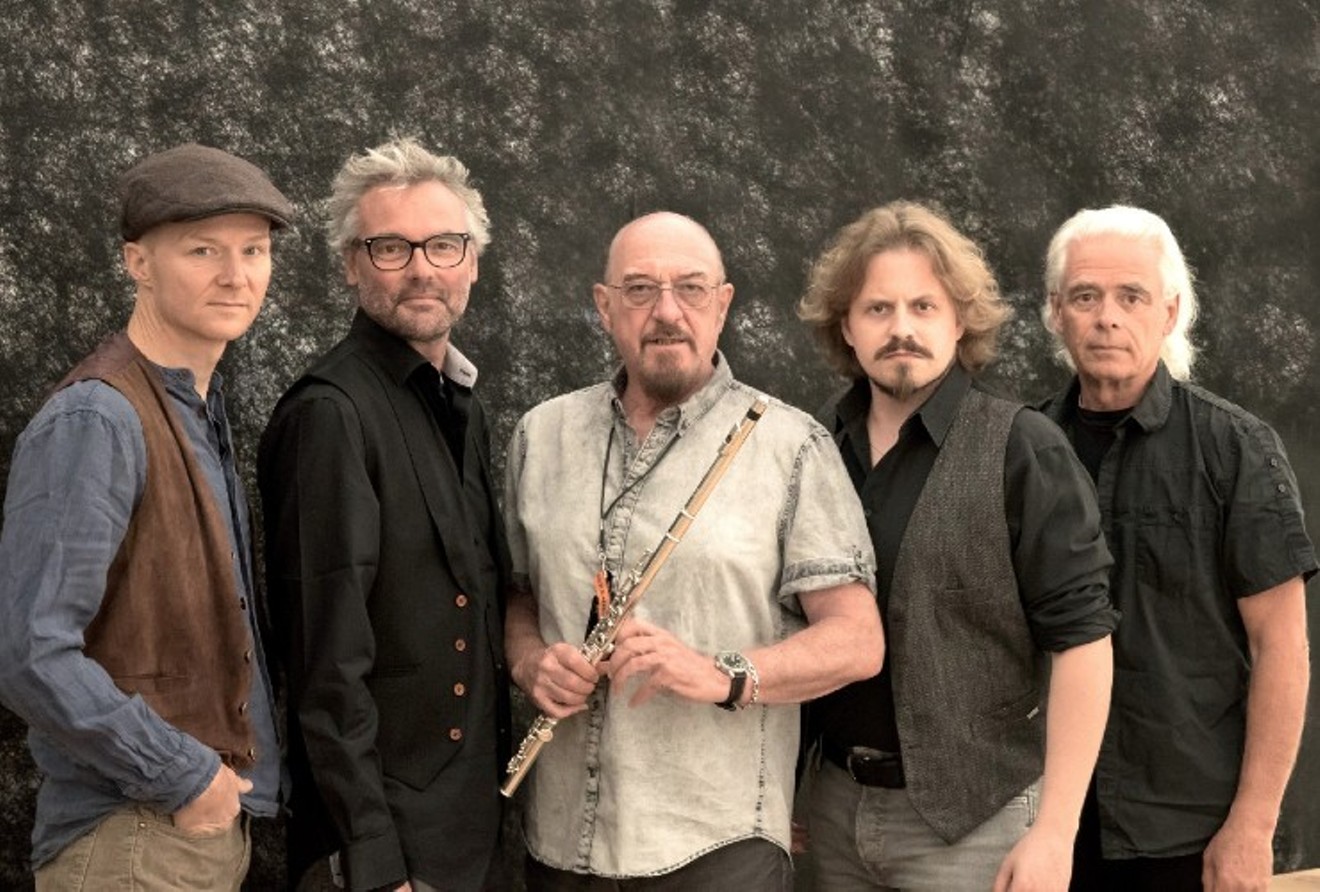 The Tull lineup on record: Scott Hammond, John O'Hara, Ian Anderson, Florian Ophale, and David Goodier. Photo by Sylvia Finke/Courtesy of Chipster PR
Admirers of the longtime British Prog Rock legends Jethro Tull know that religious themes and imagery are common subject matter, including on some of their best-known efforts like Aqualung, Thick as a Brick, and A Passion Play. But they really take front-and-center in their newest record out next month—their first non-holiday release in over two decades—The Zealot Gene (Inside Out Music).

As the band’s co-founder, front man/flautist/acoustic guitarist, chief songwriter, and only constant member since their 1968 debut This Was, to many Ian Anderson is Jethro Tull. Many have even assumed that the group is named for him, instead of the actual 18th century British agriculturalist who provided the moniker’s inspiration.

record cover
He’s long been interested in the Bible from a storytelling standpoint, and sprinkles names and places from both Old and New Testaments in the track listings for The Zealot Gene. His own personal journey has been on a more shifting path.

“My parents didn’t go to church, but they packed me off to Sunday school at age 7 or 8. And is scared the shit out of me. I found the stories and the way they were told to us very, very frightening,” the 74-year-old says. “And I had religious education in grammar school. It didn’t lure me into a feeling of being spiritually aware in a traditional church environment.”

He performs in churches and cathedrals around the world, and on a recent trip to Spain just sat through his first full Catholic mass. “I don’t call myself a Christian when it came to making this record. I am just using elements of Biblical text,” he offers.

“Like everybody else, I’m seduced by a good tale, and good story, and Christianity has a great advantage over other religions in that is has a profound narrative. A beginning a short middle, and an end that promises Series 3 in Netflix terms,” he adds.

And as for The Son? “There’s highly probably there was a Jesus of Nazareth who did some of the things they said he did. As for Jesus The Christ or Jesus The Messiah, I have a problem with that. But not Jesus the Slightly Radical Jewish Prophet who met a sticky end in crucifixion and is the focus of half the planet.”

On “Mine is the Mountain,” a first-person vengeful and angry God has had it with humans and just wants to—“for God’s sake”—be left alone. “The Betrayal of Joshua Kynde” with its story of betrayal for silver coin suggests the story of another “J.” And “The Fisherman of Ephesus” is heavy with Biblical words.
Finally, the title track may begin with reference to religious zealots, but Anderson finds very contemporary parallels, especially (but not limited to) the followers of a certain former U.S. President.

Lyrics include “Carrying the Zealot gene/right or left no in between/Beware, beware the Zealot gene/naked flame near gasoline.” And “Ear-splitting twitter thunder/and a screaming banshee wail/You got too many opinions/and a tom cat by the tail.”

And while it is often used in a negative connotation, Anderson notes that being called “zealot” could also be taken as a badge of honor. “I’m not using ‘zealot’ just as a Christian term, but as someone who is a fanatic, a really strong passion about something. I mean, you can be fanatical about building model railways or collecting stamps. Not just divisive things you see on social media or in populist politicians,” Anderson says.

“It could be about Trump, but easily six other national leaders in other countries off the top of my head who use social media—or in some case, state-controlled media—to win elections in pseudo-democracies. But being a zealot could also mean you have a passion or drive for something that is morally good as well as bad.” The record’s genesis has been somewhat of a long one. Anderson first began work on it in 2016 by jotting down some names and phrases. By late 2019, the majority of seven of the 12 numbers by the then-current lineup of Anderson, Florian Opahle (guitar), Scott Hammond (drums), John O’Hara (keyboards) and David Goodier (bass).

Then the pandemic hit, and Tull’s recording and live dates came to a screeching halt. In the case of the latter literally when the band were informed upon checking into their Helsinki hotel that the government of Finland had banned all public gatherings. Anderson used the rate time off to work on a biography of the band and group of collected lyrics, but was anxious to finish the record.

So he fleshed out the rest of the album at his home on acoustic guitar, had band members record and send him their parts electronically (including new guitarist Joe Parrish-James, taking over for the recently and amicably departed Opahle), and put together the final product completed in June. Which was delayed—again—when it became clear that pressing the vinyl version of The Zealot Gene would take longer than expected.
Asked if he ever thought that vinyl would even be a viable medium for music again in 2021, Anderson is reflective. “If you had asked me that 10 or 15 years ago, I would have thought that would be pretty amazing. But it seems there’s a small but definitive number of ardent fans and collectors who want it,” he says. “And vinyl counts toward chart positions, which means a lot to the record company. So they want a simultaneous release in all formats.”

Recently, Jethro Tull has done about 20 shows, and the day after this interview, Anderson would hop a plane to Rome, Italy to play as a special guest at the Vatican Christmas Concert (which he wryly adds is not taking place in the Vatican proper, nor an especially religious event as it’s being filmed for a TV special). He says that masks are compulsory for both attendees and performers until they step on stage, and proof of double vaccination is required.

“And I could wake up tomorrow and someone has changed the rules at the airport. But you have to accept this stuff. People didn’t want to wear seatbelts at one time. The world has changed,” he says. “Back in the ‘80s, nobody, particularly in the gay community, wanted to wear a condom. Then AIDS persuaded them to rethink things. People really do have to practice safe intercourse in the broad way that we communicate with others. Keep your distance, wear a mask, and have your prophylactic vaccinations.”
And Anderson believes in that, having volunteered for COVID vaccine trials and even human challenge trials to be infected with COVID on purpose after his vaccinations. “I can’t understand why the medical profession is so pussy footing allowing those to take place. People are the best guinea pigs in trials. And the medical profession has not allowed or been chose to take the risk ethically. And I think it’s a mistake.”

When we last spoke with Anderson in 2017, Jethro Tull, Yes, and Deep Purple were at the time noted by many classic rock fans as the most glaring absences from the Rock and Roll Hall of Fame. Since then, the latter two have been enshrined in Cleveland, but Anderson is ambivalent about Tull ever joining them. Plus, he says he doesn't like attending—much less performing at—big-deal ceremonies. And he feels it's more of an American institution anyway.

In addition to their own shows (booked mostly in Europe and Scandinavia in 2022), there’s other live Jethro Tull music out there. Long-serving guitarist and former member Martin Barre will be bringing his unwieldly-titled “50 Years of Jethro Tull Music with Official Tull Members Clive Bunker and Dee Palmer” to the Dosey Doe on January 25. Anderson—who notes the band has had 27 members over the years—says he’s mostly fine with it.

And there’s no shortage of Tull tribute acts, some of which Anderson has met and seen while attending fan conventions around the world. So, what’s it like when the Ian Anderson of today meets a 1970’s “Ian Anderson”—complete with flute, wild flowing hair, Renaissance Festival attire, and, uh, rather large codpiece?

“Mostly, I find it a bit embarrassing!” he laughs. “But I always exhibit good manners, smile, give them a hug and say ‘Great!’ Even when I have to stifle the laughter!”

For more on Jethro Tull, visit JethroTull.com
KEEP THE HOUSTON PRESS FREE... Since we started the Houston Press, it has been defined as the free, independent voice of Houston, and we'd like to keep it that way. With local media under siege, it's more important than ever for us to rally support behind funding our local journalism. You can help by participating in our "I Support" program, allowing us to keep offering readers access to our incisive coverage of local news, food and culture with no paywalls.
Make a one-time donation today for as little as $1.