Luba Dvorak and his band perform every Sunday at The Continental Club where he will hold his first ever Brooklyn Twang Festival on Saturday, May 29. Photo By Gladys Fuentes
As live music is slowly returning to venues all across the city, it’s been comforting and refreshing to see mostly local bands revving back up and serving as a great reminder of the immense talent this city holds.

Luba Dvorak, who moved to Houston just a few years ago from the Big Apple and quickly made himself a major part of our city’s musical landscape, will be celebrating local talent in a big way with his first ever Brooklyn Twang Festival taking place Saturday, May 29 at The Continental Club.

Dvorak will be combining his New York roots and Houston musical friendships with the all-day festival featuring like minded bands who embody Dvorak’s Brooklyn Twang vision which he describes as “Honky Tonk just sloppier. It’s got the New York swagger and it's a little rough around the edges.”

“I’ve been thinking about it and meaning to do it for a while, almost two years,” says Dvorak of his first annual festival. Prior to the COVID-19 pandemic, Dvorak held a residency at the Big Top Lounge with his weekly Wednesday Rambles.

Recently, Dvorak and his band made the switch from Wednesday nights to Sunday afternoons creating a new vibe for their daytime, backyard ramble.

“That's all an inspiration from Levon Helm,” says Dvorak when discussing the concept of a friend filled, musical ramble. Helm, inspired by his childhood experiences in a musical family who took part in tent revivals and state fairs where the real parties would start after hours when musicians and staff all got together to make fun and rowdy music for the nighttime crowd.

Helm’s Midnight Rambles were held on his property in Woodstock, New York in his famous barn and the tradition continues to this day, a request he made prior to his death in 2012.

“I grew up with that with my dad and his friends playing all the time,” says Dvorak. “I grew up around rambles and it's just a fun hang. It’s fully non scripted and then we go on a journey.”

Luba will keep that same old school ramble state of mind and energy for his Brooklyn Twang Festival. The event will be all day starting at noon and then keeping it going into the evening with 14 bands playing on two stages in The Continental Club’s renovated backyard.

“We finished it just before the shutdown,” says Dvorak of the backyard of the club where he not only plays but also runs sound. “Beetle played one show and then we closed so it has just been sitting here. I’m really glad that we got to make it work and it looks great. They did a great job building it and it's got the Continental vibe, just outside. It feels like we are back and we are back at the right pace.”

In between bands playing on the main stage, the festival will feature acoustic performers on the smaller stage keeping the music going all day. Attendees will be able to go in and out throughout the day where they can take advantage of all the shopping and dining available around the club and food from outside will be permitted in the backyard.

The gorgeous poster for the festival, designed by Carlos Hernandez, will also be available for purchase during the event.  “It’s the biggest, smallest festival in town and I like that it'll be a very close and safe vibe,” says Dvorak of the event. 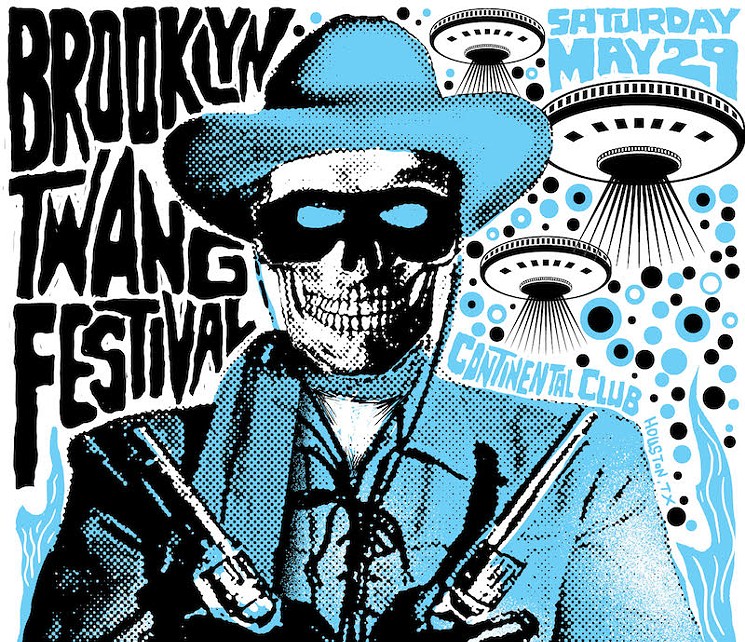 Prints will be available for purchase at the event.
Poster art by Carlos Hernandez.

This will be the first event for the Continental where fans can purchase tickets ahead of the show and there are only 100 tickets available in order to keep this event socially distanced and safe. Masks are required when attendees are not seated at their table.

“I kind of just stopped obsessing about it and texted a bunch of friends a bunch of bands to see if they were down to do it and everybody was super down. It was like, bam, we are doing it! It’s very exciting and a little bit nerve wracking, but it's going to be a lot of fun.”

“We're keeping a Brooklyn vibe going for sure,” says Dvorak who will be reunited with former New York bandmates Mark Greenberg and Brian Karp along with now Tulsa based guitarist Bator Kalo who he got to know during his time in New York.

When discussing his good fortune to have fallen so quickly into Houston’s hub for musical talent revolving around the Continental Club Dvorak is openly grateful and excited for the chance to celebrate his musical friends, many of whom rotate duties in each other's bands and may be on and off the stage for most of the day.

“I don't even know how it happened. There's a great scene here and a great musical community here, everybody supports each other. It builds off of the home base, which is the Continental Club. That’s the clubhouse so it's really cool to kind of fall into it and be part of it.”

The Brooklyn Twang Festival will take place Saturday, May 29 at The Continental Club, 700 Main. Doors open at 1 p.m. with music until 10:00 p.m. outdoor, seated and masked concert, $22 tickets available online.
KEEP THE HOUSTON PRESS FREE... Since we started the Houston Press, it has been defined as the free, independent voice of Houston, and we'd like to keep it that way. With local media under siege, it's more important than ever for us to rally support behind funding our local journalism. You can help by participating in our "I Support" program, allowing us to keep offering readers access to our incisive coverage of local news, food and culture with no paywalls.
Make a one-time donation today for as little as $1.