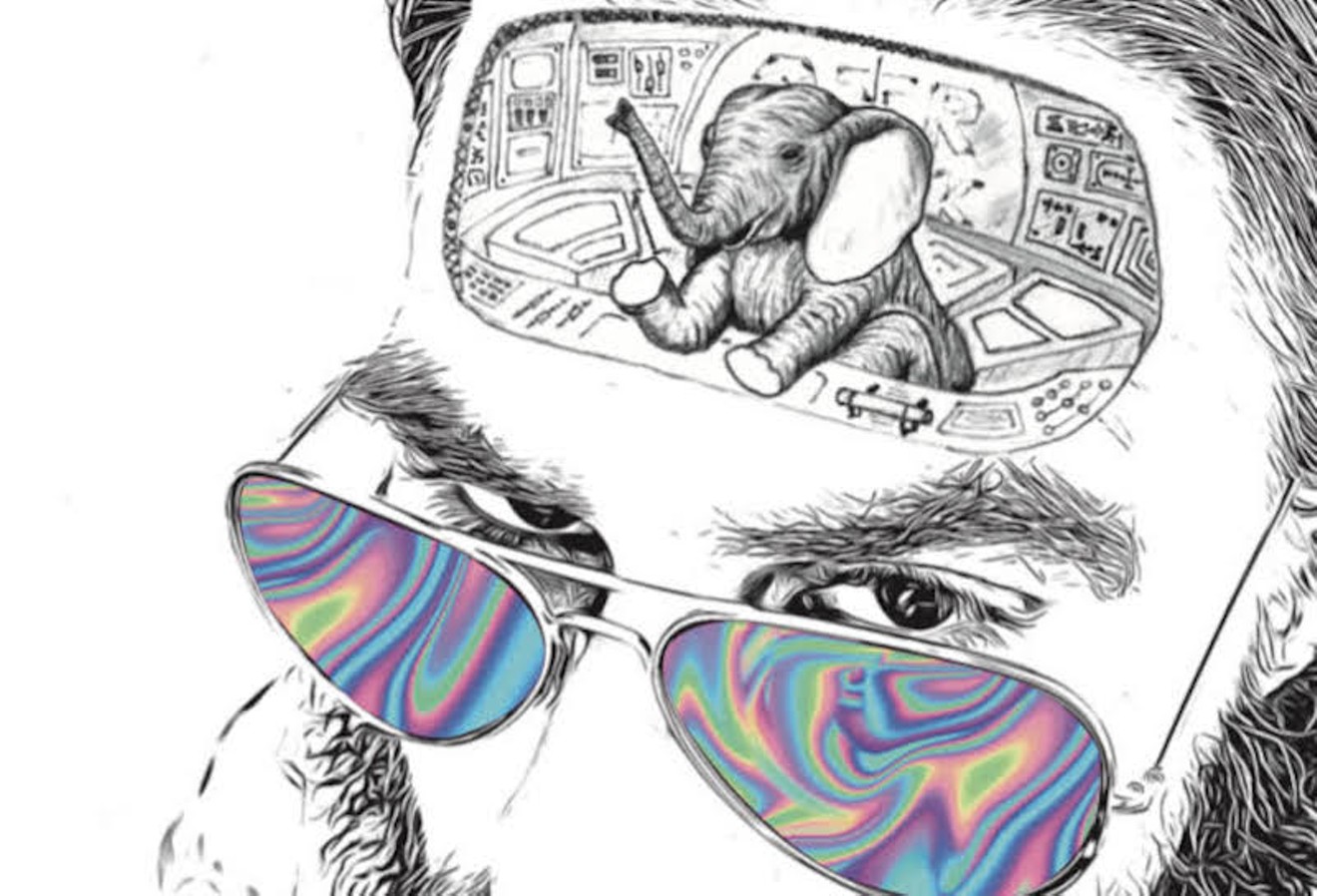 After being a long time side musician in many bands, Mark Riddell is taking his turn with his debut solo project Corporeal Pilot. Artwork by Mark Riddell, Candela De Valle and Trish Cramblet
Rock and roll has taken on many forms throughout its conception with each passing decade adding new elements to the genre. On Mark Riddell’s debut solo album, Corporeal Pilot he intentionally taps into the many faces and phases of rock and roll.

After serving as a bass player for some of Houston’s best bands over the last ten years including The Allen Oldies Band, Mike Stinson, Leon III, Charlie and the Regrets, Grand Old Grizzly and The Mighty Orq, Riddell had plenty of experience across genres to choose from when focusing on his solo work.

“When I would listen to songs in different genres I would think, ‘I want to write a song like that one of these days’ and so I did and it's a little all over the place,” says Riddell of his first solo effort.

“I don't really see myself as a front man necessarily. I do enjoy it but I don't necessarily see myself as one because I don't want the headache quite frankly. I prefer to jump into the side man thing and sing harmonies but at the same time I really like writing songs.”

Riddell decided to use his downtime during the pandemic to focus on songwriting and with some nudging from his friends and bandmates at Edgewater Studios he decided to start a Kickstarter campaign where he raised the funds to meet his goal in only a few days.

“I don't like asking people for money, let alone anything else,” says Riddell with a laugh. After discussing the possibility of raising some money to make the record with some friends he felt encouraged to go for it and was overwhelmed by the response.

“That was cool, that made me feel a little bit better about it,” he says, adding that the support really fanned the flames of his desire to make a good album. “Otherwise I just feel like I'm wasting everybody's good will.”

Waste he did not. Corporeal Pilot is a fun and dynamic listen where Riddell shows not only his experience as a musician, but his personal influences and not often highlighted voice as a singer and songwriter. “You don't have to like all the songs on the record, you just gotta like one,” he says with a laugh.


The first single “Cover of The Year” due out on Friday, March 4 is an upbeat, feel good track reminiscent of The Cars that instantly implants itself into the brain with it’s poppy vocals.

“I do really love The Cars,” says Riddell. “I think they are a brilliant band. Truly one of the best. It’s not by accident that their style slips in there from time to time.”

Much of Corporeal Pilot takes from Riddell’s youth in the ‘90s and the rock of that era which he describes accurately as “comfort food for those of us that grew up in that time” but also has some clearly ‘60s and ‘70s influenced tracks.

Many of these songs were written during the pandemic when Riddell, who is constantly busy with gigs, had the rare chance to stay home and focus on his writing. With no shortage of musicians to help out, he tapped his friends at Edgewater to help him record his songs.

“It was fun,” says Riddell. “I knew I had the right guys for it. We all are of the same age and grew up listening to the same music so I knew that if I brought them this stuff, I wouldn’t have to do a lot of explaining.”

When asked what his experience as a side man has helped him bring to the table as a bandleader Riddell says, “I just want everybody to know the songs and you can do whatever you want to from there. That’s what I learned from being a side man; be prepared show up for the rehearsal like you don't need to be there and it makes it better.”

Riddell grew up in Houston and was exposed to music from a young age when his mother and grandmother taught him piano. He went on to play drums in his high school band and was clearly interested in music but his interest went up a notch after his aunt gifted him some Led Zeppelin.

“It changed everything,” he says. “That’s when I was like I definitely want to learn to play bass now and John Paul Jones became my instructor.”

Riddell, who has a background in psychology and law, was practicing law until 2011 when he experienced a shift at work that pushed him toward exploring doing music full time as he simultaneously offered consistent work as a bass player in many of the bands he continues to play in today.

The name and artwork of the album refer to a dissociating feeling he learned about while studying psychology which always fascinated him and resonated with his own experiences.  People with Dissociative Disorder often feel a disconnect between their physical bodies and their memories, identities and surrounding.

“It’s just this very odd feeling of being removed and when I was studying psychology in college, it would bother me sometimes. It was kind of distracting. That's kind of what it feels like, like I'm piloting this human form.”

The concept adds another layer of importance and depth to the longtime side man stepping to the front to explore who he really is as an artist. If Corporeal Pilot is an expression of Riddell grabbing the control as an artist, then he and his band are in for a good ride.

To celebrate the release at The Continental Club was a natural choice as Riddell plays there frequently with his many projects and calls it his "home away from home." “It’s its own little thing. It’s a magical little place and it attracts cool people,” he says of the club that really nurtures local talent.

Mark Riddell will perform on March 5 at The Continental Club, 3700 Main, 7 p.m., $12-22.
KEEP THE HOUSTON PRESS FREE... Since we started the Houston Press, it has been defined as the free, independent voice of Houston, and we'd like to keep it that way. With local media under siege, it's more important than ever for us to rally support behind funding our local journalism. You can help by participating in our "I Support" program, allowing us to keep offering readers access to our incisive coverage of local news, food and culture with no paywalls.
Make a one-time donation today for as little as $1.