How Athens, Georgia Became a Mecca of Music and Alt Culture

R.E.M. at folk artist R. A. Miller’s whirligig farm in Rabbittown, Georgia. L to R: Michael Stipe, Peter Buck, Mike Mills, Bill Berry. Photograph © Laura Levine/Courtesy UNC Press
In high school, most World History classes teach that Athens, Greece was the epicenter of culture back in the day when there was a lot of sculpture chiseling going on and Harry Hamlin was trying to kill Medusa. But in Music History class, its unlikely namesake of Athens, Georgia held similar cred for its own thriving scene.

From the late ‘70s to the early ‘90s, Athens was a breeding ground where bands like R.E.M., the B-52’s, Pylon, Love Tractor, Oh-OK, Vic Chesnutt, the Squalls, the Bar-B-Q Killers, Guadalcanal Diary, Widespread Panic, and the Drive-By Truckers got their start before embarking on careers with varying degrees of wider fame, success, and critical evaluation. Also home to the University of Georgia, its low cost of living and thriving DIY art community made it an unlikely home for a Southern Bohemia.

University of North Carolina Press book cover
Grace Elizabeth Hale was right there after moving to Athens in 1982 to attend UGA, journeying from a concert attendee to co-owning a small bar/live music venue and eventually joining her own band, Cordy Lon. She later became an academic, historian, and author, currently the Commonwealth Professor of American Studies and History at the University of Virginia.

All of that made her unusually qualified to produce Cool Town: How Athens, Georgia Launched Alternative Music and Changed American Culture (384 pp., $20, University of North Carolina Press). And if it seems that this was a book she was born to write, she was one of the last to realize it.

“It’s funny, a long time ago a dear friend of mine suggested I write it, and he started telling other people that I would!” Hale laughs. She said she figured that “someone” would write such a tale and maybe even interview her for it. But when her friend and longtime Athens musician Vic Chesnutt died in 2009, it became clearer that that the task might fall to her.

“It just hit me that the 'someone' better start doing it and interviewing people because they weren’t always going to be around. And that made me realize if the mythical 'someone' wasn’t stepping forward, I had both the skills as a historian and the insider knowledge to do it, even though I was reluctant!” she says. “And I wanted to do an Athens book that was more than just a sex, drugs, and rock and roll story.””

The majority of Cool Town is about music, but Hale’s narrative also takes scenic side journeys into history, race, gender identity, political, and local culture and characters. As well as the whole appeal of the city and the young people who loved the cheap rent and beer, cool clubs, casual hookups, and a permissive atmosphere where a local Pro Tip might be if you don’t order meat in your dinner at the Taco Stand, your dollar could stretch farther.

But there was no definitive Athens music scene “sound” any more than there was for CBGB’s up north in New York (try finding acts more disparate than the Ramones, Talking Head, Blondie, and Richard Hell). But Hale posits if there is one “quintessential” Athens band, it would be Pylon. Made up of art school students, they burned brightly and shortly and never left the city for a more ambitious career.

Pylon broke up for the first time in late 1983 at what seemed to their local fans like the height of their fame. L to R: Vanessa Briscoe Hay, Michael Lachowski, Curtis Crowe, and Randy Bewley.
Photo by Curtis Knapp/Courtest of UNC Press
“They are fantastic. I argue that they are the band most important to the Athens scene, even if R.E.M. is [better known]. And Pylon had the vision that you could stay in Athens,” she says. “The art school connection was also very important. They very much had a ‘just do it’ approach to art,” she says.

“You didn’t have to be Michelangelo to start drawing, anybody could learn to use the tools to create, which they took to music. They taught themselves to play instruments, and [music] was another medium to express themselves were expertise was not required. That’s indie culture. An emphasis on originality over craft and a celebration of amateurism, which also brought more women and queer people into the scene.”

Occasional reunions have burnished Pylon’s legend, but a recent series of reissues and box set from New West Records will surely stimulate the memories of old fans and the curiosity of new ones.

Of the city’s two best known band exports, both R.E.M. and the B-52’s have had varying degrees of relationships to the city. In early interviews, both would even try to distance themselves somewhat from the town that birthed them and any “southern band” tag. Though as Hale writes, Michael Stipe would often return to Athens to support artists financially and in the media, and even show up unannounced at small gigs. 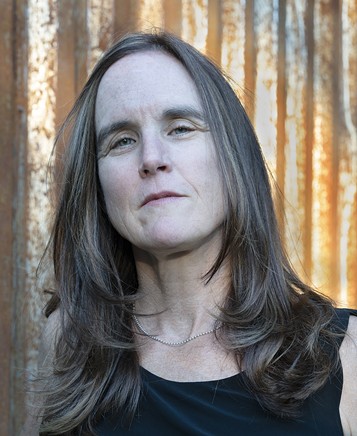 Grace Elizabeth Hale today.
Photo by William Wylie/Courtesy of UNC Press
“The B-52’s got a lot of flak from people locally for leaving to go to New York, but that’s unfair. Even the barest indie music infrastructure didn’t exist in Athens, and their options were really limited,” Hale says. “You had [guitarist] Ricky Wilson going to the University of Georgia law library to read about how to negotiate their record contract!”

She adds that as R.E.M. became bigger, members seemed to find a balance between career ambitions and community connection.

“And it was interesting to see the twists and turns. Early on, they would act like they didn’t know how to play their instruments, despite Mike Mills and Bill Berry being fantastic high school musicians. And then to see them later on acting like they didn’t do that! The denial of ambition is very powerful in the Athens scene, and across indie culture. And that’s got pros and cons.”

In fact, Hale says she never heard R.E.M.’s 1991 monster breakthrough album Out of Time until she started working on the book, because she had stopped listening to them by that time—though even she couldn’t avoid that album’s monster hit “Losing My Religion.” She even enjoyed their 1992 follow up Automatic for the People.

But even as Hale knows, talking and writing about music has its limitations—you have to actually hear it. So she’s put together a Spotify list to accompany the book, and hopes that seeing the names of Athens bands both famous around the world or only known to obsessive crate diggers will drive readers to someplace like YouTube. Even though she feels many of these bands’ best performances were live and thus no longer in the ether.

“The scene was our answer to what we understood as the failures and limits of our America. And our participation in this collective creativity transformed us,” Hale writes early in Cool Town. Toward the end of the book, she reflects on the city as it is today and the legacy of scene some four plus decades after the B-52’s played their first gig at a small Valentine’s Day party, an event captured on the cover of the book.

“[Athens] is an arty old aunt and uncle, a part of the cultural landscape rather than a challenge to it,” she offers. “The biggest casualty was our own vaunted amateurism.” Nevertheless, Cool Town is an insightful, detailed, and celebratory story of how one town at one time became the stuff of musical legend.
KEEP THE HOUSTON PRESS FREE... Since we started the Houston Press, it has been defined as the free, independent voice of Houston, and we'd like to keep it that way. With local media under siege, it's more important than ever for us to rally support behind funding our local journalism. You can help by participating in our "I Support" program, allowing us to keep offering readers access to our incisive coverage of local news, food and culture with no paywalls.
Make a one-time donation today for as little as $1.