Bob Gruen's Life Through the Lens of Rock and Roll 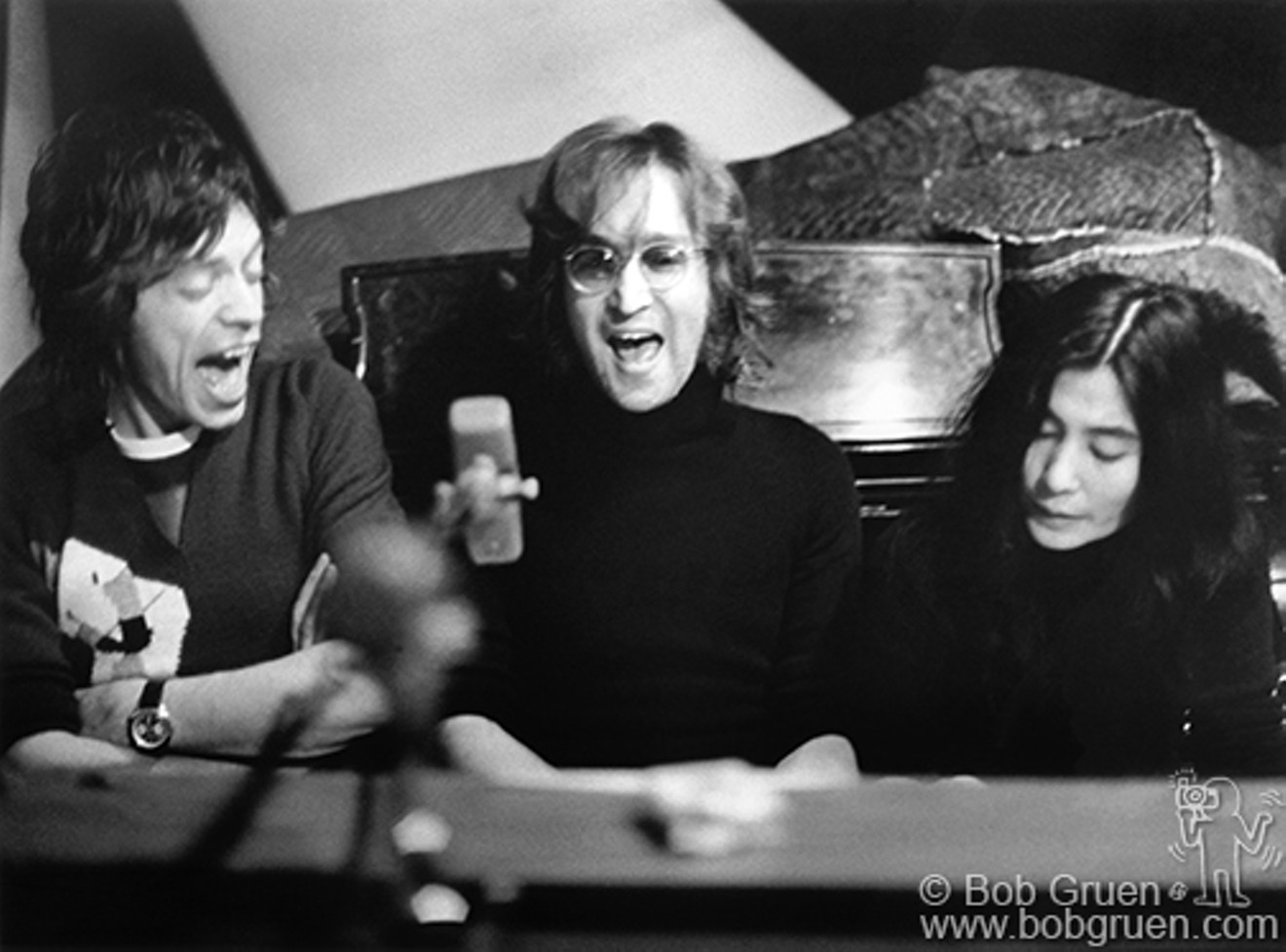 Mick Jagger, John Lennon, and Yoko Ono at the Record Plant in New York City, 1972. Photo by Bob Gruen/Provided by Klenfer PR
While their names are often known only to music nerds and credit line readers, the iconic images taken by A-list Classic Rock and Roll Photographers are familiar from hundreds of record covers, T-shirts, posters, and prints which now can be seen in high-end galleries. This small club includes shutterbugs like Jim Marshall, Mick Rock, Annie Leibovitz, Lynn Goldsmith, Henry Diltz, and Baron Wolman.

Also among those esteemed bylines is Bob Gruen. Know the famous pictures of John Lennon behind sunglasses and sporting a “New York City” T-shirt? Or making a peace sign while standing at the base of the Statue of Liberty? That’s Gruen behind the lens. Robert Plant with his arms joyously raised and standing by his Led Zeppelin bandmates in front of their private plane? Gruen too. The members of KISS in full makeup, but dressed in conversative business suits? His. And so many others.

There’s more than 200 of his images reproduced in his autobiography Right Place, Right Time: The Life of a Rock and Roll Photographer (400 pp., $32.50, Abrams). But this is – as Gruen says – a “word book” in which he tells the story and his life and 50+ year professional career, sprinkled with scores and scores of anecdotes of musicians he’s photographed stretching back to the 1965 “Dylan Goes Electric” Newport Folk Festival. 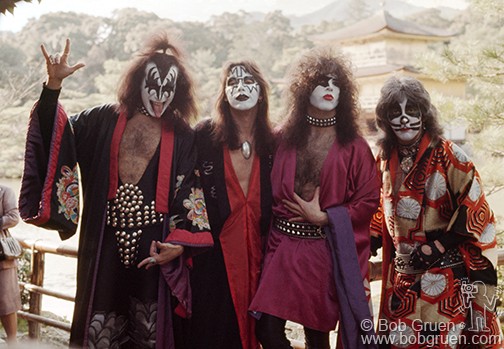 KISS in Kyoto, Japan, 1977. Event though he was their official photographer, even Gruen wasn't allowed backstage when the band was out of makeup.
Photo by Bob Gruen/Provided by Klenfer PR
In fact, it’s probably easier to mention who he’s not taken photos of the '60s and '70s than reproduce the extensive list. But from soul greats like Ike and Tina Turner to teen poppers the Bay City Rollers to hard rockers KISS and CBGB’s punk and new wave bands like Blondie and the Ramones, he’s shot them all.

Gruen – who turns 75 this week – had been mulling the project for a while. “I’ve been wanting to do this a long time, but it’s a long process to get the stories down, what to say what not to say…and how to say it,” he says.

One of the stark contrasts with today’s music journalism is the unfettered access Gruen enjoyed, though both what the title suggests and sheer hustle (though he did have to resort to subterfuge on a few occasions. Bob Dylan is not a fan). That’s unimaginable it today’s first-three-songs-no-flash-shoot-by-the-soundboard rules most concert photographers work under.

And sometimes that access got…personal. Like when Gruen went on a week-long cocaine binge with Ike Turner. Or used his Boy Scout medical training to fix an open, bleeding wound on the arm of Sid Vicious. Or found famous acts who he just shot with then-new video equipment watching black and white footage of themselves on Gruen’s apartment TV. He once cooked a spaghetti dinner for the Clash there when they couldn’t find an open restaurant. 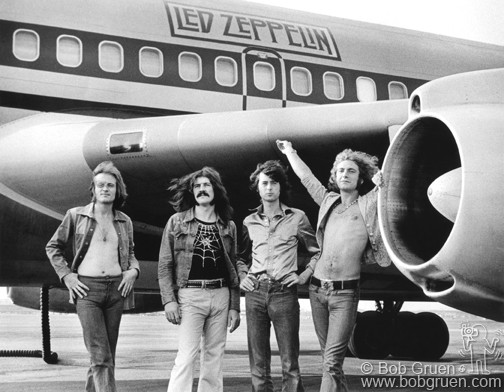 An impromptu shot of Led Zeppelin in front of their private plane in 1973 is one of Gruen's most famous works.
Photo by Bob Gruen/Provided by Klenfer PR
“A lot of bands I worked with, I got to know when they were starting out. If you go to a club get to be friends with them and stay friends with them, you can get access. At CBGB’s, nobody was famous yet,” he offers. He also had to learn other aspects of the job on the fly while deciding when to shoot, when to develop his prints, and which of his freelance newspaper and magazine clients would pay for them.

Gruen says a roll of quarters was just as important for him to have as camera lenses, because he’d have to make constant pay phone calls. So many that he was astounded when a friend estimated that if he made eight calls a day that coast a quarter each, over the course of a year that was $700+ he could deduct on his taxes as a legitimate business expense. He also had other surprising income streams.

“I made more money with the Bay City Rollers than any band over the years!” he laughs. “They’d do whole magazines just on them! And they were a fun band with great songs.” In addition to his photos appearing in newspapers, magazines, and books worldwide, Gruen and his work were the subject of a 2011 documentary Rock and Roll Exposed: The Photography of Bob Gruen. 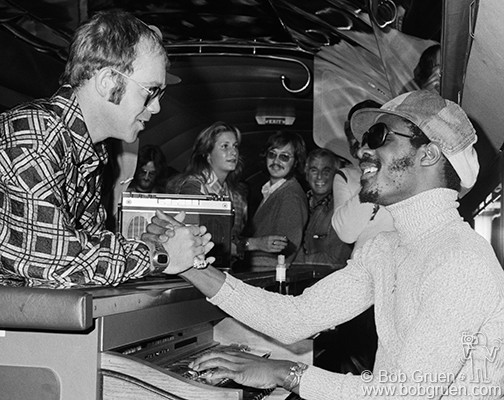 When Elton John was urged to see "this piano player" at the back of a plane in 1973, he was overjoyed and surprised to see the musician was...Stevie Wonder!
Photo by Bob Gruen/Provided by Klenfer PR
Of all his subjects, Gruen was closest both professionally and personally to John Lennon and Yoko Ono. For years, Gruen was their go-to photographer, whether in their Dakota apartment in New York City or across the seas in Japan. On the night that Lennon was assassinated, the former Beatle had left a package earlier in the day for Gruen to pick up in the Dakota lobby. Which he did in a very surreal and shocked fashion as mourners had already gathered on the streets outside.

Because of that closeness, Gruen got to see the couple in a way few others did. “They were pretty open. Yoko is a very good cook, and John learned how to cook. That was surprising, because the extent of his cooking before was cheese [sandwiches] and corn flakes and milk!” he says. “But they got into the macrobiotic diet, baking bread and making fish. I always tried to arrive around [meals]. It got to be a joke where John would say ‘Oh, Bob’s here. Is it dinner time?’” 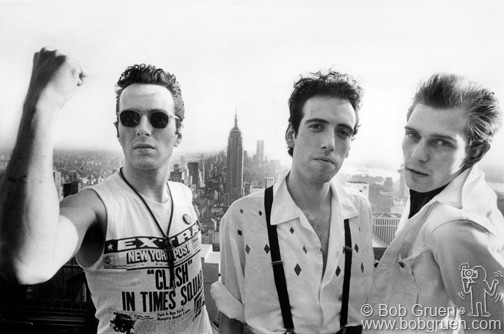 Joe Strummer, Mick Jones, and Paul Simonon at the Top of the Rock in New York City, 1981.
Photo by Bob Gruen/Provided by Klenfer PR
He also notes that Ono in private is a very different from her long-entrenched serious public persona. “Yoko has a fantastic sense of humor. And you couldn’t live with John Lennon without having that. It was a laugh fest. He was always cracking jokes. But she has a real sense of purpose, and of getting people to know about peace.”
Another subject Gruen was close with was the Clash, and especially front man Joe Strummer, who he says was extremely unpretentious.

“Rock stars talk all the time about themselves, but he would listen to people. He loved meeting people and hearing what they were thinking. That was fascinating. He’d stay up all night talking,” Gruen says. “And he took a lot of photos all the time, hundreds. He was always carrying a pocket camera. I don’t know that he ever got them developed, because I’ve rarely seen any of them.”

Much has changed technologically in the photography world since Gruen began snapping. He switched to taking all digital photos about a decade ago. But rather than begrudge the development, he embraces its possibilities. Bob Gruen at a retrospective of his work at the Museum of Modern Art in New York, 2009.
Photo by Mandi Newall/Provided by Klenfer PR
“You have to use it. People want to see pictures immediately. It got to where you couldn’t send a print or a slide to a magazine any, they all demanded a scan,” he says. “I like Photoshop to enhance pictures and the color. You can do it much easier on a computer than in a darkroom. You can enhance a picture, but I don’t think you should change it. I like that more people can enjoy photography and share it.”

Gruen tells scores of tales in Right Place, Right Time, but one that criminally only gets a sentence or two is when he took photos of all four members of KISS – in complete makeup and costume – pouring vials of their own blood in the red in mixture used to print the 1977 Marvel comic book about them, all under the watchful eye of comic book legend Stan Lee. He expounds further.

“Well, growing up, Spider Man was my hero. He was a teenage boy with a camera! But that was a surreal day. Being with KISS was always surreal. They’re these New York guys and then they put on makeup and become superheroes,” he says.

“It was Gene’s idea putting blood in red ink. We got on a plane, flew to the Buffalo printing factory. And each member poured a vial of their blood in a 50 gallon ink drum. Stan Lee was smiling over the whole thing,” Gruen says. He also recalls on that plane was a copy of an issue of Playboy that happened to feature an interview with Lee and a drawing of Spider-Man’s co-creator as the web slinging wonder. Gruen duly presented the issue to Lee, and got his autograph.

One journalistic nitpick about the book is that in the acknowledgements, the first thing Gruen praises is the writing of music journalist Dave Thompson. The seeming ghostwriter doesn’t get even a “with” or “as told to” credit on the cover. Still, it’s a great read and wonderful eyewitness account to decades of rock and roll. And when this pandemic is over, Gruen will be ready to hit the clubs and the venues again.

“For me, rock and roll is always about freedom. Freedom to express your feelings very loud and in public,” he sums up. “At a concert, everyone is screaming. And no one is worrying about paying the rent.”
KEEP THE HOUSTON PRESS FREE... Since we started the Houston Press, it has been defined as the free, independent voice of Houston, and we'd like to keep it that way. With local media under siege, it's more important than ever for us to rally support behind funding our local journalism. You can help by participating in our "I Support" program, allowing us to keep offering readers access to our incisive coverage of local news, food and culture with no paywalls.
Make a one-time donation today for as little as $1.