Capitol Records Promo Man on the Me Decade The fourth volume of music biz publicist/promo man Dave Morrell’s ongoing memoir charts his decade at the storied label’s New York offices. He was there during a crucial changing of the guard between traditional classic rockers and their MTV-era successors.

In bite-sized chapters, Morrell offers anecdotes about working (albeit briefly) with a wide range of artists from Carole King, Graham Nash, Bob Seger, Ricky Nelson, and Donny Osmond to the Plasmatics, Iron Maiden, the Tubes, and Duran Duran. This includes a shopping trip with the Duran boys to a hip Manhattan boutique where they preferred the women’s clothing to men’s. 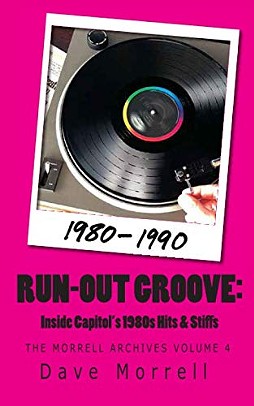 Self-Published book cover
And he takes members of Iron Maiden and their manager to see a New York Mets game at Shea Stadium, where the down-to-earth headbangers were fine sitting in the cheap seats. Though it threw off some fans who spotted them and just assumed by their decidedly non-VIP behavior that they couldn’t possibly be the real thing.

On the other end of the spectrum Great White’s lead singer Jack Russell, who on the night before a slate of PR appearances bums $50 from Morrell for a hotel breakfast the next morning. Then he says it’s to buy a camera. Then he calls Morrell to come pick he and a bandmate up at 4 a.m. from a sketchy part of New York City where they finally ‘fess up to the real story. They used the money to score crack.

Readers also learn that longtime David Letterman bandleader Paul Shaffer always had “the best pot.” And it’s interesting to hear about the Capitol acts Morrell and his brethren and sistren tried to push which never made it (Prism? Urgent? Gina Go Go, anyone?).

Less successful are his frequent (too frequent) chapter recreations of frenzied phone calls from “rumpdog” bosses Bruce Wendell and, later, Walter Lee, as they exhort their harried and belittled promo staff to push, push, PUSH a certain act or song to get radio station “adds” onto the airwaves. Written in a frenetic style with lots of ALL CAPS and multiple exclamation points (!!!!!) and profanity, the reader gets the stage that Morrell jarringly tries to set, crammed with details of chart positions and local radio station call letters. But in the words of Morrell’s beloved Beatles, “it’s all too much,” and the eye glosses over at the print tirades.

Speaking of the Fabs, another book could be written about Morrell’s adventures in bootleg and underground record and tape trading, with a concentration on the Beatles. That he would get to actually work with Paul and John, and then have brief encounters with George and Ringo (the latter two at the band’s 1988 Rock and Roll Hall of Fame induction) makes his fanboy dream come true.

He even sneaks off with Linda McCartney to share a quick joint at one press event, much to Macca’s bemused chagrin. And his encounters with Lennon are loose and without star trappings. Morrell does shed some light on the hidden machinations of the radio and record industry of the time when payola was still a big part of breaking or sustaining acts on the airwaves, as well as the indignities.

When Morrell and Capitol’s promotional machine help make a surprising smash success out of Bonnie Raitt’s 1989 Nick of Time record (selling 5 million copies, hitting No. 1, and winning several Grammys, including Album of the Year), they are rewarded at Christmas time from the label with a T-shirt. At least it was better than what the Press Department received: nothing. His chapter on breaking Crowded House and their “Don’t Dream It’s Over” single is also well done.

Overall, Run-Out Groove could have benefitted from more depth and stories, especially about the wider scope of Morrell’s duties and the music biz culture at the time. But as a quick-read pulling back the curtain a bit, it does its job.
KEEP THE HOUSTON PRESS FREE... Since we started the Houston Press, it has been defined as the free, independent voice of Houston, and we'd like to keep it that way. With local media under siege, it's more important than ever for us to rally support behind funding our local journalism. You can help by participating in our "I Support" program, allowing us to keep offering readers access to our incisive coverage of local news, food and culture with no paywalls.
Make a one-time donation today for as little as $1.