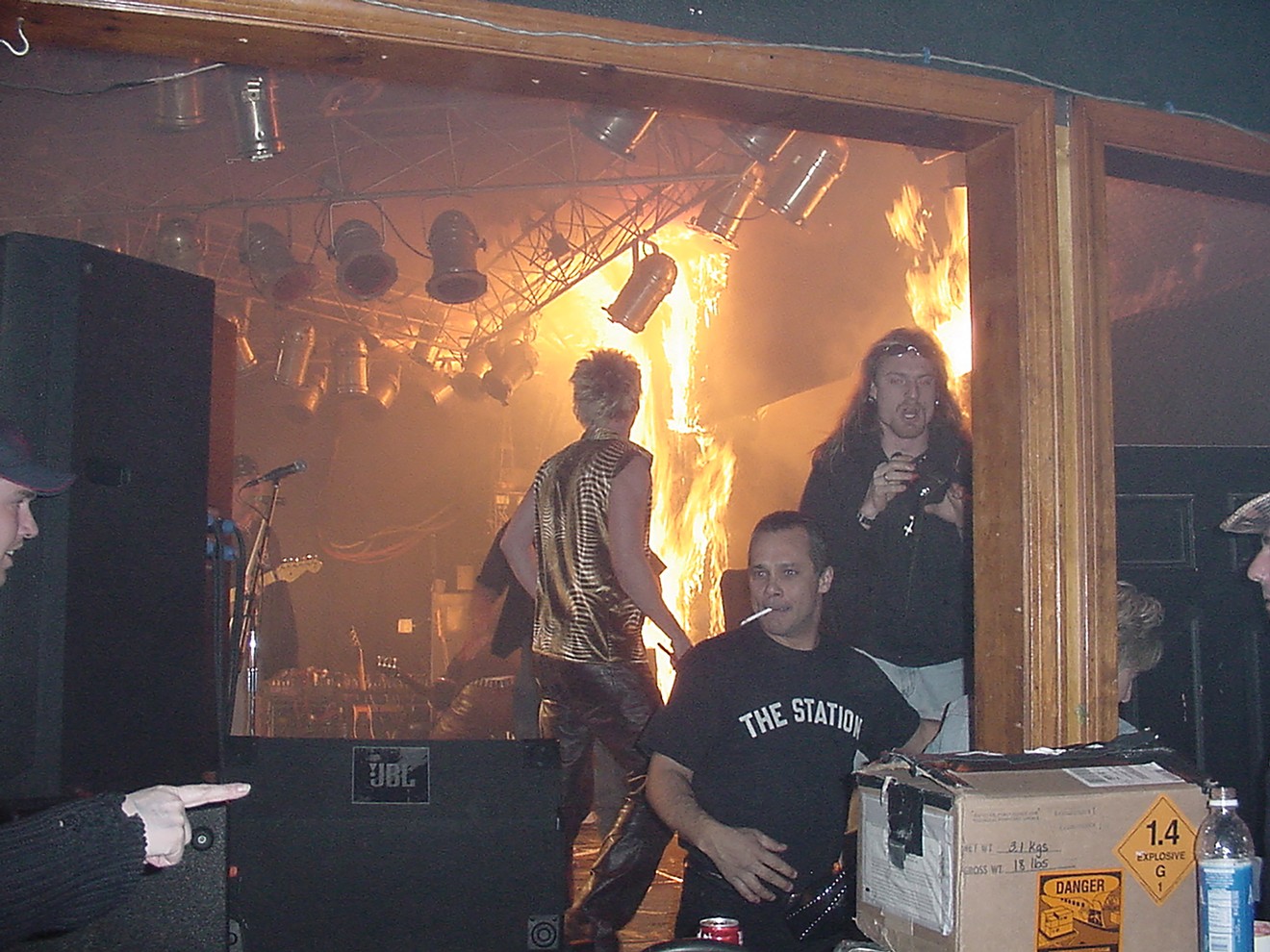 Ninety seconds doesn’t seem like a long amount of time. Most people can sing all of “The Star Spangled Banner” in that period. But a minute and a half was all that it took for 100 people to die and 200+ more to be seriously injured on the night of February 20, 2003. 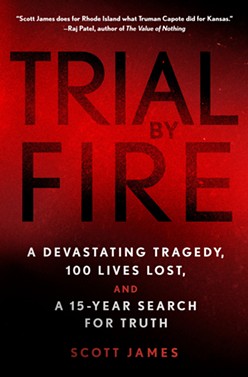 Thomas Dunne Books cover
That’s when stage pyrotechnic special effects at the start of a concert by ‘90s hair metal rockers Great White got out of control, completely engulfing the Station nightclub in West Warwick, Rhode Island. A stampede of confused concertgoers and staff for limited exits with impaired vision ended up bottlenecking, with people screaming and dying from burning, trampling, or asphyxiation. When it was all over, police noted that the bodies were stacked five feet high. It was the worst fire and concert tragedy by the numbers in modern American history.

The story of the events leading up to the fire and its long aftermath has never really been told in full before until now, with investigative journalist Scott James’ new book Trial by Fire: A Devastating Tragedy, 100 Lives Lost, and a 15-Year Search for the Truth (384 pp, $29.99, Thomas Dunne Books).

James is uniquely positioned to tell the story not only as a native of the area, but someone who had worked in Rhode Island media and knows its political and social culture as well as some of the players. Most notably Station co-owner and local TV reporter Jeffery Derderian.

What started out as a longform newspaper article morphed into a full length book once James started “peeling away the onion skins” to find new revelations, access documents never before made public, and conducting scores of interviews with survivors, victim’s families, locals, police and law sources, and others—some of whom had never talked to a journalist at length before. “I thought it needed to be all put into one place so people wouldn't forget it,” James says. “It’s the worst thing that happened where I grew up.”

Still, he had his research work cut out for him, even in today’s climate of Google searches and instant access. “2003 falls into this weird time period when it comes to information. A lot of it locked behind archives and paywalls, like [newspaper] The Providence Journal. It’s not as easily accessible as [news stories] are today,” James says. “Do you remember microfilm? That was a goldmine for me because even electronic archives are not complete. And when you look at a newspaper, you can understand the context and the time and how the story was [originally presented].” 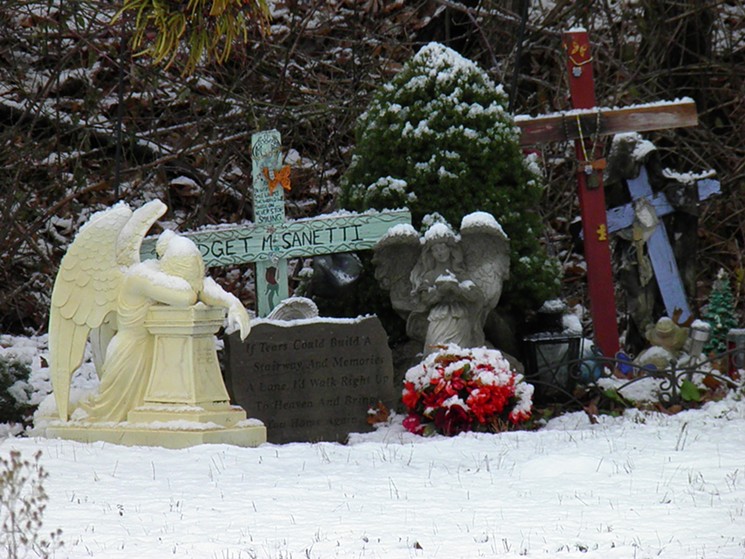 A homemade memorial to victims put up after the tragedy.
Photo by Scott James/Provided by Thomas Dunne Books
In short, how the fire happened was a domino effect of bizarre and unfortunate circumstances. Derderian and his brother/co-owner Michael had actually sold their club, but the transfer of ownership hadn’t taken place yet, and Jeffery often was there working, as he was on this night.

The Station had passed its most recent fire inspection, but what wasn’t known until afterward was that the foam insulation which had been installed around the stage and the club was not the flame retardant type which had been ordered, and instead was highly flammable. Older sections of the club also had easily ignited portions.

Great White road manager Daniel Biechele was in charge of setting off the pyro effect, in essence two large, powerful sparklers. But even as they caught the stage and walls around it on fire, concertgoers thought it might just be part of the show.

That misperception ate up precious seconds, and by the time clubgoers were fully aware of the truth, the charred, scalding portions of burnt foam—that some described as “black rain”—poured down in chunks from the ceiling. There is actual video footage of the early chaos. Brian Butler, a cameraman coworker of Jeffery Derderian was at the Station that night filming a segment, horribly and ironically on…club safety. 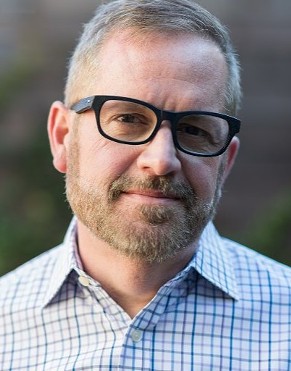 Author Scott James.
Photo by Ian Tuttle/Provided by Thomas Dunne Books
James says that he talked to Butler – who had never given a full length interview about the night in question before. So did (to James’ surprise) a number of other sources like the Rhode Island district attorney and local police chief. Even the distraught foam company salesman who had first suggested to the brothers they look into insulation for the club to counter noise complaints from area residents talked to him.

James criticizes local newspaper The Providence Journal for what he viewed as somewhat questionable journalistic practices, and its seeming eagerness – in a search for the story’s “villain” – to point the finger exclusively at the Derderians. But even the personal connection Scott James had with Jeffrey Derderian didn’t mean instant access to the brothers. It opened the door, but the chain lock remained in place for a long time.

“I was Jeffery’s boss when we worked together 25 years ago. When this fire happened, because the town is so small and parochial, everybody knew somebody who was involved in it,” James says, adding that it took “years” of efforts to slowly gain the brothers’ trust and get them to talk on the record.

As for Biechele – who literally lit the fuse that caused the tragedy – James shows how he didn't follow pyrotechnic safety instructions, altered paperwork to show he had the club’s knowledge and permission to use the effect (he did not). He had done the same thing at other clubs without permission. Oddly, he took less scorn from some corners than the Derderians.

“[Biechele] emerged in Rhode Island as somewhat of a folk hero among certain people who think he was kind of the patsy and took the fall for someone else,” James says. “He had no way of knowing that this club would be such a tinderbox, and that’s the [tactic] his lawyer used.”

Biechele did not talk to James for the book, nor did Great White lead singer Jack Russell, who has become a flashpoint for the entire tragedy, and who initially asked James for financial compensation to participate. The band’s guitarist, Ty Longley died in the fire.

James says the most surprising thing he discovered while researching the book was the vast gulf between survivors of the fire and the victim’s families. 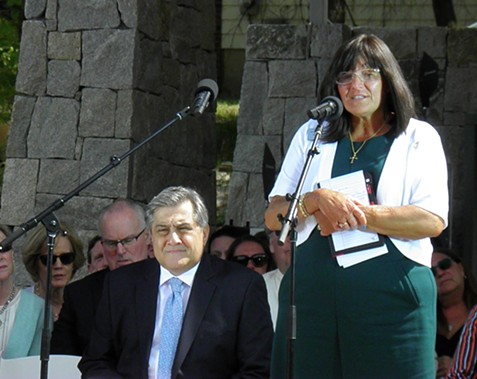 Gina Russo speaks at the dedication of the Station Fire Memorial Park at the club's former site on May 17, 2017.
Photo by Scott James/Provided by Thomas Dunne Books
No one more embodies this than Gina Russo, who spent 11 weeks in a coma and suffered horrific burns and physical and mental issues she lives with to this day like so many others who made it out. Her fiancée, Fred Crisostomi, died trying to save her. James spoke with her extensively.

“That was the biggest surprise. These people should have all been together. And how different things would have been if they had [united] into one force to advocate for justice and resources,” James says.

“But they didn’t. Instead, they fought among each other, and said really bitter, awful things…they lashed out at each other instead of those who were responsible. It’s a really weird twist in the book.”

James adds that to this day, Russo – who spearheaded a memorial and fought for survivors – is trolled on the internet with comments like “You should have died” and “You should have been the first to go.” “You have to be careful about judging people by the way they grieve but...come on! That’s just awful!” James says, exasperated.

Ultimately, through a series of plea bargains, no one was ever actually put on trial for their part in the Station Fire. Biechele and Michael Derderian were sentenced to prison (and, bizarrely, ended up at the same prison). In another weird twist, Derderian’s cell mate lost a friend in the fire, which left James astounded. Still, no one seemed to be happy with the outcome, or its lack of a traditional ending. Biechele was released in 2008, and Derderian a year later.

“There is no such thing as closure. People think that if there’s a big Perry Mason moment or courtroom day that will happen,” James says. “ But then when [people] go home and look at the empty bed of a lost one or the cemetery…none of that changes. It’s not a salve for everyone.”

Ultimately, the Station Fire is the reason that the first thing a lot of Gen Xers (including myself) do when walking into a venue to see a show—even one frequented many times—is make a visual scan of the room for exit locations, fire hazards, or anything off about the room layout that would complicated a quick departure. James does the same, though he doesn’t think that the years have made much of a difference.

“I was as a Lizzo concert recently in an older building, and I remember thinking ‘There’s not enough exits and it’s too crowded! There’s going to be trouble if something goes wrong!’ So I don’t know that anything has changed.”
KEEP THE HOUSTON PRESS FREE... Since we started the Houston Press, it has been defined as the free, independent voice of Houston, and we'd like to keep it that way. With local media under siege, it's more important than ever for us to rally support behind funding our local journalism. You can help by participating in our "I Support" program, allowing us to keep offering readers access to our incisive coverage of local news, food and culture with no paywalls.
Make a one-time donation today for as little as $1.