Jean Millington, Brie Darling, and June Millington of Fanny in 2018. Photo by Linda Wolf
In the last issue of Rolling Stone produced in the 20th century, a bevy of musicians were asked what musical issues they’d like to see remedied or addressed in the 21st. In a quote that was pulled out to feature, David Bowie was very much to the point.

Movie poster
“One of the most important female bands in American rock has been buried without a trace. And that is Fanny,” part of his comments ran. “They were one of the finest fucking rock bands of their time. They were extraordinary, and nobody’s ever mentioned them. They’re as important as anybody else who’s ever been, ever. Revivify Fanny. And I will feel that my work is done.”

Unfortunately, Bowie’s vision had not come to fruition by the time of his death in 2016. But he’d likely be thrilled to see the band’s story, music and legacy given the full documentary treatment in last year’s Fanny: The Right to Rock.

Written and directed by Bobbi Jo Hart, it sheds light and appreciation on the group the way that other recent female-driven rock docs have done for the Runaways, Suzi Quatro and the Go-Go’s. Fanny: The Right to Rock will screen at Houston’s Museum of Fine Arts on March 18 and 19.

“We get pitched a lot of films—and I’m happy that we’re back to actually showing films!” says Marian Luntz, MFAH Film and Video Curator. “I thought this would be a good for Women’s History Month in March. And while I was confident that I would like it, I did not know the whole backstory of Fanny and the sexism, homophobia and racism they faced.”

For local punk rock legend Dianna Ray, co-founding member/bassist/vocalist of Mydolls (formed in 1978 and still active today), she remembers hearing Fanny on FM radio in Port Huron, Michigan as a teen. But she really discovered it through her love of the music of fellow female trailblazer and Detroit native Suzi Quatro. Suzi’s sister Patti was in a later lineup of Fanny.

“I remember seeing Fanny on The Midnight Special and I was just thrilled to see a female rock band. I never thought it was possible!” Ray laughs.
The film includes contemporary interviews with almost all band members, those who worked with them, and an A-list of musician admirers including Bonnie Raitt, Joe Elliott of Def Leppard, Kathy Valentine of the Go-Go’s, Kate Pierson of the B-52’s, Cherie Currie of the Runaways, Jeff “Skunk” Baxter of Steely Dan/Doobie Brothers and Todd Rundgren, who produced on of Fanny’s records.

As the doc details early on, Fanny’s lineup had its roots in a ‘60s all-girl California-based group called the Svelts. It featured Half-Filipino/Half-American sisters June (vocals/guitar) and Jean (vocals/bass) Millington, Addie Clement (guitar), and Brie Berry (drums), the last also of Filipino ancestry. Brandt left to get married and have a child and was replaced by Alice de Buhr.

Now known as Wild Honey, the group caught the eyes and ears of producer Richard Perry, who convinced Warner Brother’s Reprise Records to sign them. After Lee departed and keyboardist Nickey Barclay was brought on, they became Fanny.

Jean Millington, Nickey Barclay, Brie Brandt, and June Millington rehearse at Fanny Hill, c. 1969-70.
Photo by Linda Wolf
The group set up their living and rehearsal space near L.A. in a house dubbed “Fanny Hill,” which served as equal parts rehearsal space and party pad. It was not uncommon to wake up and find rockers like Joe Cocker or Mick Jagger sitting at the dining room table.

Brandt came back into the fold as a lead singer/percussionist, but Perry and manager Roy Silver envisioned Fanny as a “female Beatles”—of which there were only four. She was dismissed amidst hurt feelings by all. The hard-rocking quartet released their self-titled debut in 1970.

Soon, they were opening for acts like Humble Pie, Jethro Tull and Deep Purple, and churned out three more studio albums, one per year, with June Millington and Barclay providing the bulk of the songwriting. Oddly, they (like Suzi Quatro) found more success in the UK, where somewhat humorously the term “fanny” is slang for…vagina.
Yet, they still had to field questions in every interview like "What's a like to be a girl in a band?" and "Can you compete with male rockers?" Some skeptics didn't believe they actually played their own instruments or wrote their own songs.

But they faced the usual, gender-free problems of constant touring/recording grind and personality/musical conflicts. Though tacked on was the added fight for acceptance and respect because of their gender, ethnicity and some members’ sexuality. It led June Millington and then de Muhr to leave.

Brandt (now Brie Howard) came back again on drums, and Patti Quatro (sister of Suzi) was added on guitar. Cam Davis also had a brief stint on drums. A move into a more glam-and-glitter sound (and forced “sexier” stage costumes) from their hard rock beginnings did not move the needle on Fanny’s record sales. Their highest-charting single was the sexually-charged “Butter Boy” (inspired by Jean’s then-boyfriend…David Bowie) at No. 29.
Lyrics for that included “He was hard as a rock but I was ready to roll/What a shock to find out I was in control.” Presented with a vintage 45 in the documentary, Jean lets out a laugh. However, by the time it hit the charts, Fanny had already broken up, burnt out and frustrated.

The last part of the documentary showcases the Millington sisters and Brie Howard-Darling as they reunite to make new music with 2018’s Fanny Walked the Earth (which for some reason, also became the band’s new name). Patti Quatro and de Muhr guested, but not Barclay, who “just disappeared” and purportedly does not want to be contacted or have anything to do with the band anymore.

It would be churlish and spoiling to denote what happens next but suffice to say it puts the documentary—and the band—on a jarring and complete other path.
Writer/Director Hart also shows recent footage of June Millington instructing and mentoring a group of teen and pre-teen girls who want to rock at her Institute for the Musical Arts. In fact, the film’s very title comes from a young female punk performer who tells the camera “Fanny gave us the right to rock.”

One fortunate outcome of the film is that many who watch it will want to hear more of Fanny’s ‘70s music. But unfortunately, none of their studio albums (or a 2002 anthology) are currently in print, so they can go for collector’s prices online.

For Dianna Ray, Fanny’s legacy goes well beyond the music, as she says that the group made other lasting and meaningful impacts. 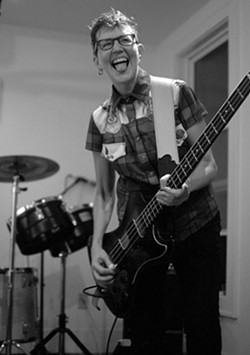 “I mean, I love the Runaways and they added a great deal, but they were sold like a novelty. Their musical talents weren’t the first thing that came to mind. Fanny wasn’t created for the male gaze. It was meant for everyone.”

Ray herself got to meet and spend some time with both June Millington and Patti Quatro as part of 2013’s MEOW Con in Austin, a conference/performance of female musicians at which Suzi Quatro was an honoree and Mydolls performed.

“What a powerhouse that June was! And she was a real visionary for that band. And there were a lot of freaking amazing female musicians there. It was an amazing experience,” Ray recalls.

“To me, it was a mind-blowing moment to have this full circle thing for me. To be involved in the same event with these women I had admired for a long time.”

“There was a period where I thought we would die a quiet death, but I’m super excited that things have worked out and we can get back at it,” Ray says. “Music is 100 percent the best thing, ever!”

Back to the documentary, Luntz says it checks off a lot of boxes for the MFAH in terms of programming and her mission.

“I think overall that this film is very empowering, and the band definitely has prevailed through the challenges,” Luntz offers. “We’ve booked a lot of music films, and it’s just great to be able to turn up the volume and really hear the music and see it performed on a big screen. I think people will be rocking in their seats!”

For more on Fanny, visit FannyRocks.com or FannyWalkedtheEarth.com
KEEP THE HOUSTON PRESS FREE... Since we started the Houston Press, it has been defined as the free, independent voice of Houston, and we'd like to keep it that way. With local media under siege, it's more important than ever for us to rally support behind funding our local journalism. You can help by participating in our "I Support" program, allowing us to keep offering readers access to our incisive coverage of local news, food and culture with no paywalls.
Make a one-time donation today for as little as $1.