It’s exactly 50 years to the day of the opening of the Woodstock festival when Felix Cavaliere picks up the phone. He remembers that, while his NY-based group the Rascals were both from and in the region during those three days of “peace, love, and music,” his band would not be taking the stage. Though not because they weren’t approached.

“Yes, we were asked to play Woodstock, but our manager thought it wouldn’t be a good idea!” Cavaliere says. “He made some decisions that cost us a bit of consternation. He knew it was going to be a bit disorganized and dysfunctional. So he passed, and that’s a shame because it was such a historic moment!” 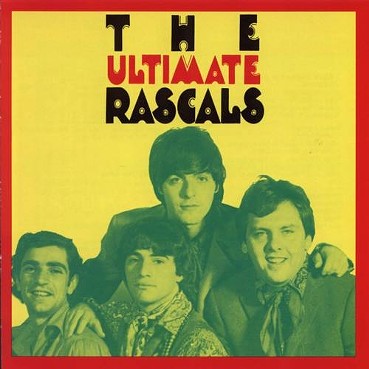 The original Rascals: Felix Cavaliere, Eddie Brigati, Dino Danelli, and Gene Cornish
Record cover
By that August weekend in 1969, the band which formed in 1965 (first as the Young Rascals) had already had a string of “blue-eyed soul” chart hits like “Good Lovin’,” “Lonely Too Long,” “Groovin’,” “A Girl Like You,” “How Can I Be Sure?” “A Beautiful Morning,” and “You Better Run” (later covered by Pat Benatar). The Rascals were Cavaliere on lead vocals/keyboards, Eddie Brigati (vocals/percussion), Gene Cornish (guitar), and Dino Danelli (drums).

But the song in their catalog that was most representative of the Woodstock era is “People Got to Be Free.” Written by Cavaliere and Brigati (the duo penned the bulk of the band’s original material), it’s a plea for freedom and brotherhood and helping your fellow man, and inspired by a guy who Cavaliere wanted to help elect President of the United States.

“I was working for Robert Kennedy’s campaign at the time, and many of us were really involved in social things. We really wanted to change things and have people get along and have respect for each other, and Robert Kennedy had those tendencies in mind,” Cavaliere recalls. “So his assassination really shook me. I was on vacation at the time and thought ‘Here I am writing love songs and having the time of my life and look what happened!’” And I had to say something. It was an emotional time for me.”

He says that the recording went well, but the record company execs were squeamish about releasing the tune – even though the lyrics were hardly controversial. Said execs were probably then pretty pleased when the song hit No. 1 in August of 1968. The Rascals later wrote and recorded the song “A Ray of Hope” for Ted Kennedy.

Band members started to leave, and the Rascals called in quits in 1972 with sporadic reunions and collaborations over the years. The Rascals were inducted into the Rock and Roll Hall of Fame in 1997 in a class that included the Bee Gees, Buffalo Springfield, Crosby, Stills & Nash, the Jackson 5, Joni Mitchell, and Parliament-Funkadelic.


The one-man acolyte who pushed mightily and tirelessly for the Rascals induction was singer/guitarist and E Street Band member Steven Van Zandt, who also gave a highly entertaining induction speech. So entertaining that writer/director David Chase was inspired to cast Van Zandt for a role in this new cable series he was making called…”The Sopranos.”

Van Zandt became involved with the band again in 2012 when he wrote, directed, and co-produced (with wife Maureen and Marc Brickman) The Rascals: Once Upon a Dream. Part concert, part theatrical experiment, and part history lesson, it reunited the original quartet to play 30 of their songs along with supplemental musicians and dancers onstage. A large video screen played both 1960s footage of the band and of the era's news events with narration.

After some try-out shows, Once Upon a Dream had a 2013 Broadway residency and then went on a short east coast tour. There were plans to go back to Broadway, then tour more around the country. But relations between Cavaliere and Van Zandt went south, and the plug was pulled.

Dino Danelli issued a statement saying that Cavaliere had demanded more money, creative control, and insisted on the use of his own band, which Cavaliere does not deny. Cavaliere and Cornish then resumed performing as “Felix Cavaliere and Gene Cornish’s Rascals." And Van Zandt blasted both men by name on social media (though ascribing the most blame to Cavaliere), encouraging fans not to buy tickets to their shows.

“They came down on me because I have this real problem. When you tell me something, I believe you! Especially when you write it down on a piece of paper and sign it!” Cavaliere offers on the record from his perspective. “But it was a bad scene. We weren’t getting paid what we were supposed to get paid, and I said goodbye.”

Cavaliere says it was Van Zandt who cancelled the tour, suggesting that the reason was economics. “He was losing money hand over fist. It was perfect for Broadway, but not for taking it on the road. It was too big for that. The ticket prices on Broadway are absurd, but New York audiences expect that. But when you go to Phoenix or Syracuse, that’s not going to happen. And that was his mistake. It started off as a great idea with a great premise. It did not end up that way, and that’s unfortunate.” At least one show was filmed for a planned DVD, but to date has not been released.


Cornish suffered a heart health crisis, collapsing onstage during a show last year. “He’s recovering, but he took the brunt. He did not really take care of himself over the years,” Cavaliere says. “So when an emergency like that pops up, your body’s not ready for it. He’s OK, but he’s not functioning as well as he’d like to.” The current lineup of Felix Cavaliere’s Rascals (named such for legal reasons) includes Cavaliere, Mike Severs (guitar), John Howard (bass), Vincent Santoro (drums), and Benny Harris (keyboards), along with horn sections hired locally.

Today, at 76 years old, Felix Cavaliere can look out into his audiences and now see three generations represented. Though he is encouraged to make at least one concession for those original Children of the Sixties.

“It’s really a treat and nice to see a young person come out and enjoy what you’re doing. It’s important. Our audience is getting older,” he laughs. “Now, our manager tells me don’t play too loud – you don’t want to kill anybody!”

For more on Felix Cavaliere, visit FelixCavaliereMusic.com
KEEP THE HOUSTON PRESS FREE... Since we started the Houston Press, it has been defined as the free, independent voice of Houston, and we'd like to keep it that way. With local media under siege, it's more important than ever for us to rally support behind funding our local journalism. You can help by participating in our "I Support" program, allowing us to keep offering readers access to our incisive coverage of local news, food and culture with no paywalls.
Make a one-time donation today for as little as $1.