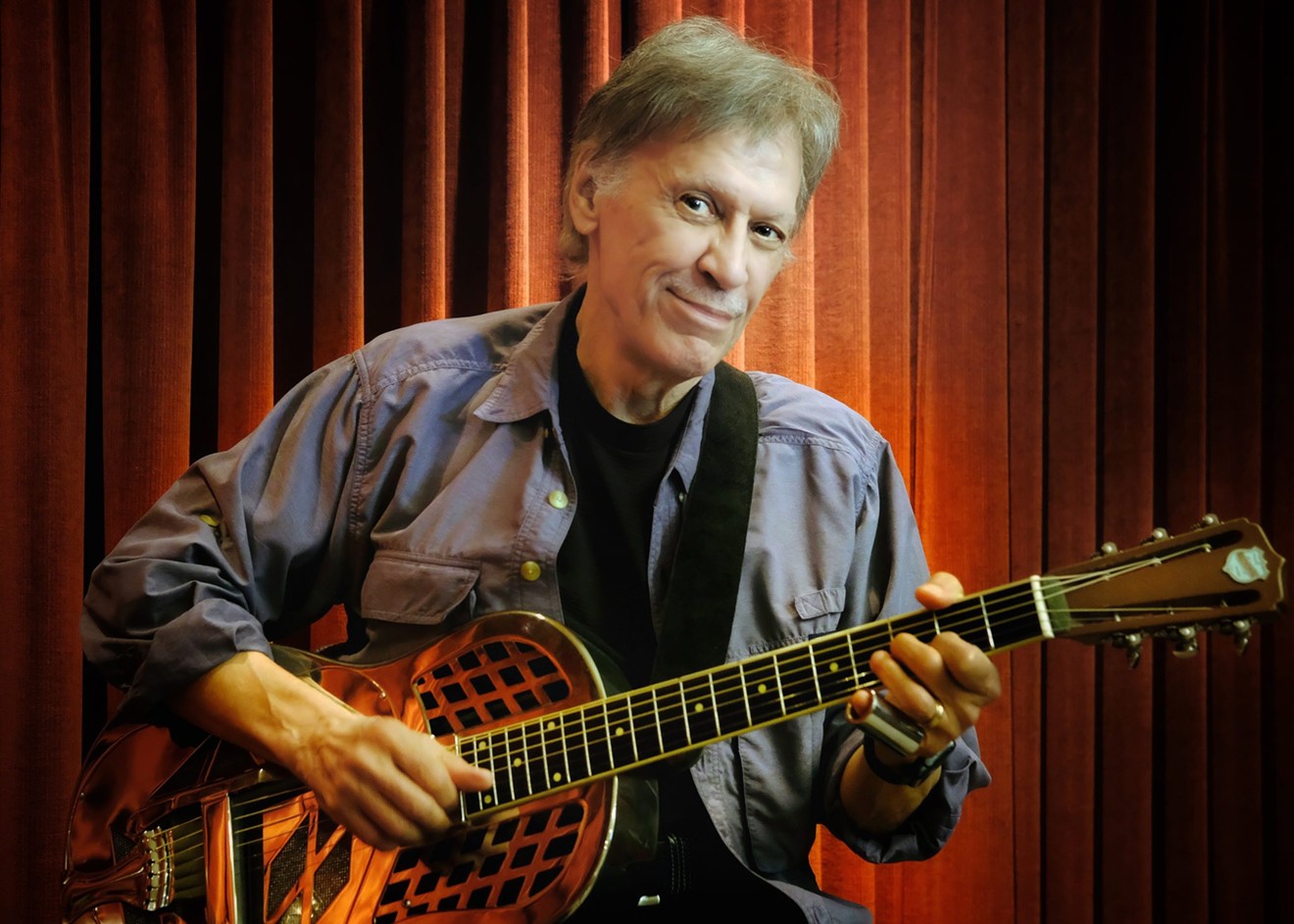 John Kay's virtual concert will focus on folk/blues covers and solo material, while raising funds for live music venues devastated by the pandemic. Photo by Jutta Maue-Kay/Provided by Clarion Call Media
John Kay’s voice is one of classic rock’s most distinctive. As the lead singer/rhythm guitarist for Steppenwolf, his gravelly, powerful tone drives their best known songs like “Magic Carpet Ride,” “Rock Me,” “Hey Lawdy Mama” and of course, signature tune “Born to Be Wild.” As the sole original member left, Kay retired Steppenwolf in 2018, 50 years after the release of their first album.

But it will be a very different musical side of John Kay that a virtual audience will see in Live from the Lobero, a livestream event that begins on Friday, November 13, at 8 p.m. PST. The taped concert features just Kay, an acoustic guitar, and a microphone. Ticket sales will benefit Santa Barbara’s Lobero Theatre and NIVA (The National Independent Venue Association), during a time when live music venues are suffering or shuttering due to the pandemic.


“After I retired Steppenwolf, the next thought of course was ‘Well, what do I do now?’ So I started doing these solo acoustic shows, and they were received warmly,” Kay says. The format has Kay mixing cover tunes, older solo material, and unrecorded new songs, interspersed with stories of Kay’s musical and personal life.

“It’s really a collection of songs that harken back to my folksinger/blues singer days in the early ‘60s. Where I and so many others with a guitar were following in the footsteps of the masters like Son House and Howlin’ Wolf, and being influenced by those our own age like Bob Dylan and Tom Paxton,” he says.

Kay and his wife Jutta Maue-Kay – who he first met in 1965 – have been living in Santa Barbara for almost a decade. He fell in love with the historic 147-year-old Lobero Theatre both as a performer and audience member. Musicians Kenny Loggins, KT Tunstall, and jazz legend Charles Lloyd had already done similar benefits, so for Kay it was a no-brainer to join the club.

“It is the oldest, still operating theater in California, and the community has lovingly looked after it by restoring it and adding new things like a PA system. It’s a clubhouse for the community that we don’t want to lose,” he says. “The Lobero and so many other live music venues around the country are barely holding on by their fingernails.”


The 70-minute show was recorded with no audience and shot with multiple cameras by a social-distanced and masked crew. It will be available for viewing for an additional 72 hours, to better accommodate Kay and Steppenwolf’s global fanbase.

“We have a lot of fans in Europe and South Africa and other parts of the world. So they don’t have to get up at some ungodly hour to watch it,” Kay says. “[Steppenwolf] had the ongoing support of a global fan base from Peru to Botswana to a biker’s festival in Venice, Italy. They heard our music. But It was never my intention to do Steppenwolf material for [this show]. I did that for 50 years.”

And while Steppenwolf’s brand of hard/psychedelic rock produced a string of good time party hits, the band has never gotten credit for its deeper material that plumbed social and political issues of the late ‘60s and ‘70s. Tracks like “Move Over,” “Don’t Step on the Grass, Sam,” “Power Play” and “Snowblind Friend” attest to that.

The impact of epic trilogy “Monster/Suicide/America”  has lasted longest. From the band’s 1969 album Monster, it’s a 10+ minute meditation on the State of America at the time, as well as immigration, imperialism, the Civil War, political and economic disparities, the police, decaying cities, the Vietnam War, and the American Dream both achieved and elusive. And it appealed to a different audience for the band.


“The white girls who were screaming for us in the audience on the Ed Sullivan Show knew ‘Magic Carpet Ride’ and that was great. But it was the FM underground radio that played the albums and [deeper] cuts,” he says. “‘Monster’ was a big hit on college campuses during the time of Kent State and protests against the war in Vietnam. That stuff went deep.”

After being off the band’s set list for years, Kay says he started getting more requests for it right around the time of the 2007/08 Great Recession. And it stayed in the set list to the last show. “People were losing their retirement monies and homes and we started playing it again. David Fricke from Rolling Stone even went back and listened to it and said how prophetic it was.”

Kay explored a similar commentary on financial issues back with “Sign on the Line,” which Houston musician/promoter Allen Hill remembers clearly from a Steppenwolf show back in the 1990’s at the much-beloved Party on the Plaza concert series. Kay seems delighted when the song is brought up, which appeared on the 1990 record Rise and Shine. 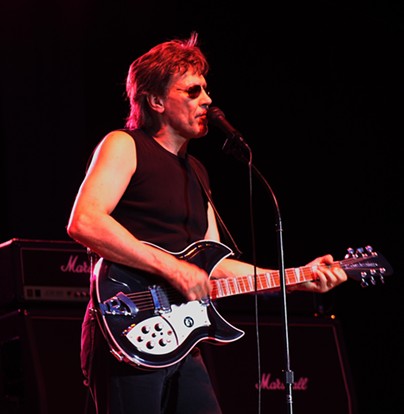 John Kay performing at the Oregon State Fair, 2007.
Photo by Fdbrumbl/Wikimedia Commons
“I used to introduce it on stage by saying ‘I’m going to do a song about that wonderful invention known as the credit card. Which enables you to buy things you don’t always need with money you haven’t made yet for items that will be broken by the time you finally finish paying them off,’” Kay offers.

“They say ‘The interest rate is a mere 18.5 percent applied and compounded, and if you have a credit card bill of $5,000 and if you pay the bare minimum, it will get paid off in the next millennium’ kind of thing. We all got sucked into it. ‘Did I ask for these? Why do I have 14 credit cards in my mailbox?’ It operates on the drug dealer template – the first hit is free. It was my sardonic take on it.”

To date, Steppenwolf has appeared on the ballot for induction into the Rock and Roll Hall of Fame once – in 2017 – but did not make it past that stage. In 2018 though, “Born to Be Wild” was inducted into the inaugural class of the newly-created Singles category, reflecting the influence and importance of individual songs.

It went in alongside “Rocket 88” by Jackie Brenston and his Delta Cats (technically Ike Turner’s Kings of Rhythm band); “Rumble” by Link Wray; “The Twist” by Chubby Checker; “Louie Louie” by The Kingsmen, and “A Whiter Shade of Pale,” by Procol Harum. Kay says he’s particularly proud to be in there with “Rumble.”

Finally, Kay says he and Jutta have been taking the forced extra quarantine time during the pandemic to concentrate on their Maue Kay Foundation, which they formed in 2004 and focuses on wildlife protection, conservation, and human rights. He recently unearthed a treasure trove of videos taken from trips around the world on missions like Africa and Vietnam.

He’s also catching up on his reading and just finished Isabel Wilkerson’s currently-in-the-news Caste. “I find her to be not only a fine writer in the sense of literature with total command of the language, but also in a manner that is instantly accessible,” he says. “It’s not over the top trying to impress the reader with a sense of the dictionary.”

But most importantly, the Kays are taking care of a recently acquired new addition to their family. “We wound up with a four-footed, fur-bearing grandchild!” he laughs. “He’s a lovable rascal who makes us smile, and my wife takes him to the beach to chase the ball. He lifts our spirits at a time when we need it.”

For more on John Kay’s Nov. 13 Lobero streamed concert, visit Lobero.org. Tickets are $15. For more on John Kay’s music and Steppenwolf, visit Steppenwolf.com.
KEEP THE HOUSTON PRESS FREE... Since we started the Houston Press, it has been defined as the free, independent voice of Houston, and we'd like to keep it that way. With local media under siege, it's more important than ever for us to rally support behind funding our local journalism. You can help by participating in our "I Support" program, allowing us to keep offering readers access to our incisive coverage of local news, food and culture with no paywalls.
Make a one-time donation today for as little as $1.