The Jacks: Thomas Hunter, Scott Stone, Jonny Stanback, and Josh Roossin. Photo by Ashley Osbourne
Though they certainly would be categorized in the “rock” section of any playlist, chart, or record store, the young Los Angeles-based band the Jacks wants to make a distinction: they play rock ‘n’ roll. And according to drummer Josh Roossin, there is a difference.

“I think rock ‘n’ roll has sort of a playfulness and attitude that doesn’t take itself too seriously. It’s something you can dance and groove to a little bit,” he says from a van in the middle of the desert en route to Mesa, Arizona. “Rock is very straight ahead. The music we make may have serious subject matter, but we approach it differently.”

That’s evident on the band’s debut effort The Jacks, a five song EP in which their original relationship-themed material like “Who Are You,” “Are You Looking for Love?” and “Walk Away” show their Led Zeppelin/Stones/Who influence. But you can also hear more modern strains of inspiration from groups like Oasis, the Strokes, and even Cage the Elephant.

The band worked with producer Matt Wallace (Maroon 5, Blackberry Smoke, Faith No More) on the EP, and they’ll be in Houston on November 19 at Warehouse Live opening for former “American Idol” finalist Wade Cota.

“A lot of these songs we actually had in our wheelhouse for about a year and a half before we recorded them. They’ve been part of our set for a while, and we wanted to be sure when we released them, we recorded them like we wanted to,” Roossin continues. “Working with Matt Wallace was an unbelievable experience. He brought out a lot in us as a band.”

The rest of the Jacks include Jonny Stanback (vocals, rhythm guitar), Tom Hunter (lead guitar), and Scott Stone (bass). The genesis of the Jacks began when Hunter and Stone began jamming on songs by Jimi Hendrix, Led Zeppelin, and AC/DC while just in middle school. While the pair were students at the University of Southern California, Stone spotted Stanback at a local club’s open mike night. The trio added a drummer and the Jacks started playing in 2016, their name originating when a fan said the members were "jacks of all trades."

Roossin had gone to high school with Hunter and Stone (he was a year behind) and had been in a couple of bands, but mainly just for fun. He was already in graduate school at the University of Colorado Boulder in 2017 when Stone called him and told him the Jacks had parted ways with their drummer, and would he like to come play with them? Roossin did, and after one semester of pursuing his master’s in Clinical Psychology, he left academic life for rock ‘n’ roll and hasn’t looked back since.

The Jacks entered and won a local radio station’s Battle of the Bands contest, winning a recording contract as the grand prize. But they chose to turn it down to further work on their music. They played at NFL and NHL sporting events before deciding it was time to record, and signed with EDGEOUT Records. 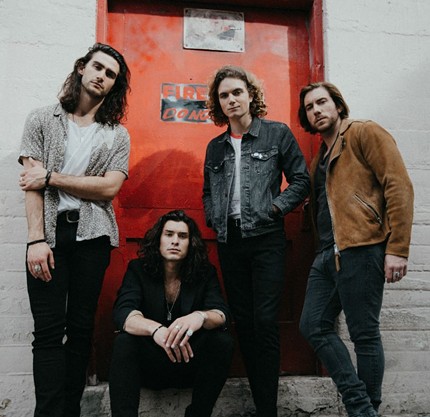 Thomas Hunter, Jonny Stanback, Josh Roossin, and Scott Stone.
Photo by Ashley Osborne
As to how a young rock (er…rock ‘n’ roll) band can grab some attention in a musical culture dominated by pop and hip hop – even with bands like Greta van Fleet, the Struts, and the Glorious Sons flying the flag – Roossin is not concerned.

“I think rock and rock ‘n’ roll isn’t as prominent as it used to be, it hasn’t been getting its due. But if what you’re doing is genuine but you’re also bringing something new to the table, I think the cream will rise to the top and people will take notice,” he says. “We’re doing something that was done in the past, but reinventing it.”

The Jacks have also gotten in the holiday spirit, just releasing their version of an unlikely Christmas carol. “In the Bleak Midwinter” is based on an 1872 work by English poet Christina Rossetti, and was later set to music by both composers Gustav Holst and Harold Darke in the early 20th century.

“We wanted to a holiday song, but pick something that wasn’t really well known and a little less soft. We didn’t want a ‘Rudolph’ or ‘Frosty,’ Roossin explains.

“Our manager found this song and we thought it was great. Jonny came up with an unbelievable rock version of it. And it didn’t even feel like a holiday song per se, and that’s what’s different about it. We worked with [producer] Thom Russo, and he was super helpful with the arrangements.”

That song will likely get an airing when the Jacks kick off their tour with Wade Cota, right here in Houston. And Roossin says the band is anxious for the run of dates to start.

“We’re four guys on stage who are best friends and play music together, and that’s amazing,” he sums up. “For the first show of the tour, you really want to set the pace for what’s going to happen every single night. We’re gonna bring a lot of energy to Houston.”

For more on the Jacks, visit TheJacksBandLA.com
KEEP THE HOUSTON PRESS FREE... Since we started the Houston Press, it has been defined as the free, independent voice of Houston, and we'd like to keep it that way. With local media under siege, it's more important than ever for us to rally support behind funding our local journalism. You can help by participating in our "I Support" program, allowing us to keep offering readers access to our incisive coverage of local news, food and culture with no paywalls.
Make a one-time donation today for as little as $1.