Travels with Gen Z: The Rock and Roll Hall of Fame - Part I 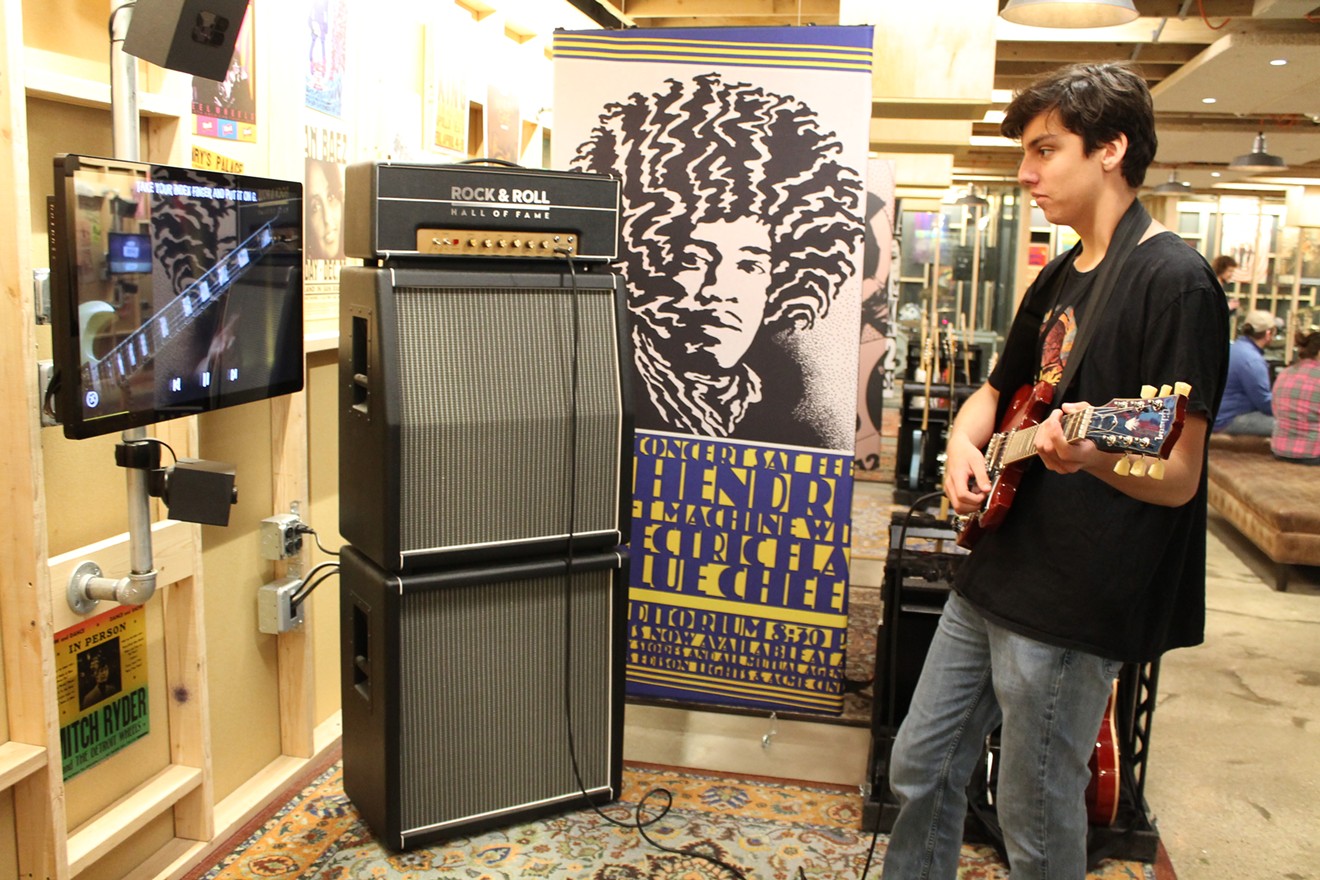 Vincent Ruggiero in The Garage at the Rock Hall Photo by Bob Ruggiero
Note: Due to the coronavirus outbreak, the Rock and Roll Hall of Fame will be closed until at least March 27.

Like countless teenagers before him, Vincent Ruggiero cautiously picks up a used guitar in a garage surrounded by posters of bands with other instruments strewn about. Hoisting the strap over his shoulder and plugging in, he strums some chords that reverberate through stacked amplifiers. And under the instruction of someone familiar the song, within minutes he’s playing the iconic intro to Deep Purple’s “Smoke on the Water.”

Except this garage isn’t at the end of a cul-de-sac in some suburban neighborhood. It’s actually The Garage at the Rock and Roll Hall of Fame in Cleveland, Ohio. The new interactive experience allows museumgoers to wander in and pick up any one of dozens of guitars and basses or sit behind a drum kit or keyboard. And with the help of a video tutorial, they’ll soon be playing songs by Van Halen, Journey, Queen, or AC/DC along with the backing of a virtual Rock Hall Garage Band. 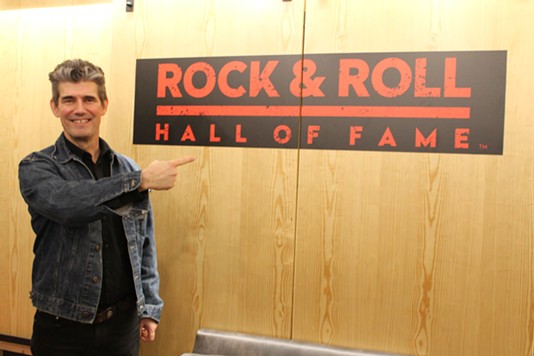 Rock and Roll Hall of Fame President/CEO Greg Harris
Photo by Bob Ruggiero
A quieter Acoustic Lounge with couches allows budding Joni Mitchells or Jackson Brownes to strum along on a wooden guitar, while a fully-equipped Jam Room can fit a number of friends or strangers together to try and bash out a tune on their own.

Not surprisingly, the median age of Garage-goers on this Tuesday afternoon skews Gen Z. It’s part of the Rock Hall’s move to appeal to a younger demographic.

“A few years ago, we asked what our visitors wanted or what would give them a more meaningful time here, and the answer was a more immersive, hands-on experience,” he says. “We have a mission to engage, teach, and inspire through the power of rock and roll. It’s got to be more than about just looking at stuff. And this brings magic.”

If you’re a reader of bylines, you might correctly surmise that Vincent is my son. And as the spawn of Classic Rock Bob, he likely knows more about rock history by osmosis and hears more ‘60s, ‘70s, and ‘80s music than most 16-year-olds. For his spring break, we decided on a father-son trip to the Rock Hall.

On this day, Vincent is sporting a Doobie Brothers T-shirt (coincidentally, the band will be a 2020 Rock Hall Inductee). But even though their commercial peak was over decades before he was born, they are one of his favorite groups, and we’ll be in the seats when their 50th anniversary tour comes to the Woodlands Pavilion on October 10. Vincent soaks in the "Woodstock at 50" exhibit next to a T-shirt that was given out only to Festival workers and a piece of the actual stage.
Photo by Bob Ruggiero
Thanks to Spotify and YouTube, Gen Z has access to pretty much any song by any artist recorded at any time literally at their fingertips. Vincent knows album deep cuts from some of my favorite bands that I don't!

That’s a far cry from a teenage Mick Jagger sending his money overseas to the U.S. in the hopes that his precious Muddy Waters and Chuck Berry records would arrive back across the pond unbroken. Or me having to drive out to a Houston Sound Warehouse location on a record release date. Or even how the similar Gen X-aged Harris sought out music.

“I used to keep a list of records in my wallet and try to find them. Now, the accessibility is awesome. Kids today can know more about the blues by sitting at their table and Googling Gary Clark, Jr., then Howlin’ Wolf, then Son House. Then you can go online and watch Son House perform at the Newport Folk Festival in 1961,” he says. “In enables people to go deeper. That said, it has become a singles culture now instead of being driven by artists. You hope that it leads to them to dig around and learn more about the artist.”

In its 25 years of operation, Harris says that 13 million visitors from around the world have come through the doors of the Rock Hall. And in addition to The Garage, they are offering more live music events and outreach to schools to introduce and entice a younger audience to the music and the Hall.

On this weekday before the Hall’s doors were open to the public, a couple of hundred excited elementary school children were watching an energetic live band cover everything from Aretha Franklin’s “Respect” to the theme song from “Scooby Doo.” SiriusXM DJ Rachel Steele broadcasts daily from a studio inside the Rock Hall.
Photo by Bob Ruggiero
Another way that Gen Z is hearing music of the previous decades is through SiriusXM satellite radio, with a channel dedicated to pretty much every era or genre imaginable. In a corner of the bottom level of the Rock Hall, SiriusXM has its own glassed-in studio where DJ Rachel Steele broadcasts live daily.

Growing up and living in nearby Euclid and Mentor, Steele has spent all of her nearly 20-year career in radio in her home state. Though she’s cognizant of how special her current gig is, DJing on both the Classic Vinyl and Classic Rewind channels. Steele also knows that her voice and music transmit up to the SiriusXM satellite in space before bouncing back down to millions of people across North America on their home radios, car radios, Sirius website, and app. It gives her a far wider reach than most DJs throughout history.

“I love that I get to come here every day and work. I don’t think there’s a better radio job out there,” she offers from behind the broadcast desk and its many crane-like microphones. Waving out to some Rock Hall attendees who have stopped and are watching our interview, I have to ask: Is it strange trying to work while people are staring at you all day like a zoo attraction? Vincent appreciates some words of wisdom from "God" himself...
Photo by Bob Ruggiero
“I’m more used to it now!” Steele laughs. “One of the things I loved about radio growing up was the anonymity. People remembered who you were through your voice, but that has changed. In the summer time, it’s packed here and people are banging on the window, but I get it. It’s cool for the fans.”

Steele is also active across her social media pages and engages with listeners. It’s an added task and expected part of the job that contemporary broadcasters in radio and television have today, unfathomable just a few years ago.

“I have people from all over the world messaging me which is sometimes good…and sometimes not so good!” she says.

The mother of two Gen Z-aged sons, Steele is used to them coming home from school saying they’ve been told by friends “My father/mother/grandparents listen to you on the radio!” As for music consumption in her own home, it runs the gamut.

“I listen to pretty much everything. A lot of classic rock,” she says. “My youngest will explore and my older one likes today’s hip hop. They’re always on YouTube and TikTok and that’s how they find their music. I remember sitting in front of the radio and waiting for a favorite song to come on to hit ‘record’ on the cassette player. That was a lot of work. My sons have no idea!”

Toward the end of our Rock Hall visit, Vincent decides he wants to take another stab at playing in The Garage. This time playing keyboards on Tupac Shakur’s “California Love” and drumming to Queen’s “We Will Rock You.” And while it’s not likely that he’ll ever perform music on a stage in front of thousands of fans, the experience was an unexpected highlight of his visit.

“That was pretty cool!” he says as we leave. And Dad is pretty damn happy about that.

Coming up in Part II: Some background on the Rock Hall, the best exhibits, how Houston is repped, and why exactly it’s in Cleveland.

For more on the Rock and Roll Hall of Fame, visit RockHall.com
KEEP THE HOUSTON PRESS FREE... Since we started the Houston Press, it has been defined as the free, independent voice of Houston, and we'd like to keep it that way. With local media under siege, it's more important than ever for us to rally support behind funding our local journalism. You can help by participating in our "I Support" program, allowing us to keep offering readers access to our incisive coverage of local news, food and culture with no paywalls.
Make a one-time donation today for as little as $1.