This documentary on jazz icon Miles Davis opens with black and white footage of the trumpet player throwing punches in a boxing ring. A lifelong enthusiast of “the sweet science,” it also pops up several times throughout this rich and insightful documentary.

It’s also an apt metaphor for the life and music of the revered-but-also-divisive Davis. He fought a lot of battles, and could equally be the attacked…or the instigator. “Miles was considered a genius,” a childhood friend notes onscreen. “But he was also considered…weird.” 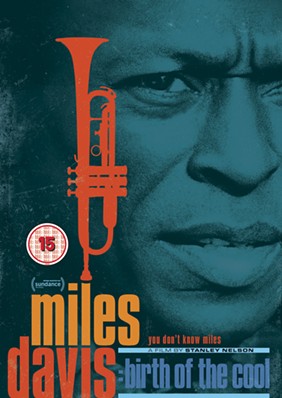 Eagle Rock Entertainment DVD
Originally aired as an episode of the PBS American Masters series, this home release includes the full program and – as a boon to Davis enthusiasts – an extra 70-minute DVD culling portions of his performances from the Montreux Jazz Festivals in 1973, 1984, and 1985.

Talking heads include a procession of music writers, historians, business associates, and family members. But the best observations come from musicians who played with or for Miles including Wayne Shorter, Ron Carter, Herbie Hancock, Jimmy Heath, and Jimmy Cobb. Younger players like Joshua Redman also offer their thoughts in his musical impact.

“We can’t even question the sacred texts we have,” Redman says. “Why is the Bible the Bible? Why is Kind of Blue Kind of Blue? It changed the sound of jazz.”

Hilariously, most of them try their approximation of Davis’ distinctive raspy voice (the result of an early vocal cord surgery) and his love for the word “motherfucker” when quoting him directly. That includes actor Carl Lumbly, who “narrates’ much of the documentary with the voice of Miles – his speech, but Davis’ words — taken mostly from his autobiography. There’s also an amazing amount of rare photos and video – including footage of him scoring a French film by improvising on his trumpet while watching the movie unfurl on screen in real time.

And while the DVD is full of admiration for Davis’ musical accomplishments (one writer says “I want to feel the way that Miles sounds”), it does not shy from his darker side and personal demons from periods of intense substance use and abuse (booze, heroin, cocaine). Also the mental, emotional, and physical abuse he’d sometimes heap upon wives and girlfriends, several of whom are given screen time here including early loves Juliette Greco and wife/muse Frances Taylor.

Racism also is a narrative thread, kicked up a notch by the fact (fairly or not) that Davis’ own skin tone was fairly dark. Early on, he marvels at how European audiences (especially the French) treated him like an artist and hero, but then he’d return to Jim Crow America and get a rude re-awakening. He could be the toast of the music world, wear flashy designer clothes, date fine women, and drive a Ferrari, but he was still a just a n-word to many.


In one famous incident, after escorting a white woman to a taxi during a set break outside of New York’s Birdland club where he was headlining, Davis was smoking outside the front. A white cop (oblivious to Davis’ name emblazoned in big letters on the club’s awning) told him to move on. An argument followed, and Davis was clubbed and brought into the police station.

The photos of him leaving, dazed and with his own blood all over his suit jacket and head bandaged, changed his outlook forever. He’s refer to the incident over and over again through the years, inflaming his already existing anger, anti-social, and insecure tendencies.

If there is one weakness in this doc, it would be that more screen time should have been devoted to talking about the specific music of Miles Davis rather than the life biography. Those who are familiar with his discography will carp at some holes.

While albums Kind of Blue, Miles Ahead, and Bitches Brew are mentioned, an entire sequence about Miles’ obsession with flamenco music and how it led to Sketches of Spain completely leaves out that record’s title. But it does show his procession from bebop to romantic balladeer to his groups bent on improvisation up to the electro-funk era and later years where he experimented (with somewhat choppy results) with hip-hop and world music.

Miles Davis: Birth of the Cool has enough to satisfy both the Miles newbie and expert, and will hopefully lead you to pull out one of those Prestige or Columbia record for another spin. Even if you’ve spun them a thousand times before.
KEEP THE HOUSTON PRESS FREE... Since we started the Houston Press, it has been defined as the free, independent voice of Houston, and we'd like to keep it that way. With local media under siege, it's more important than ever for us to rally support behind funding our local journalism. You can help by participating in our "I Support" program, allowing us to keep offering readers access to our incisive coverage of local news, food and culture with no paywalls.
Make a one-time donation today for as little as $1.