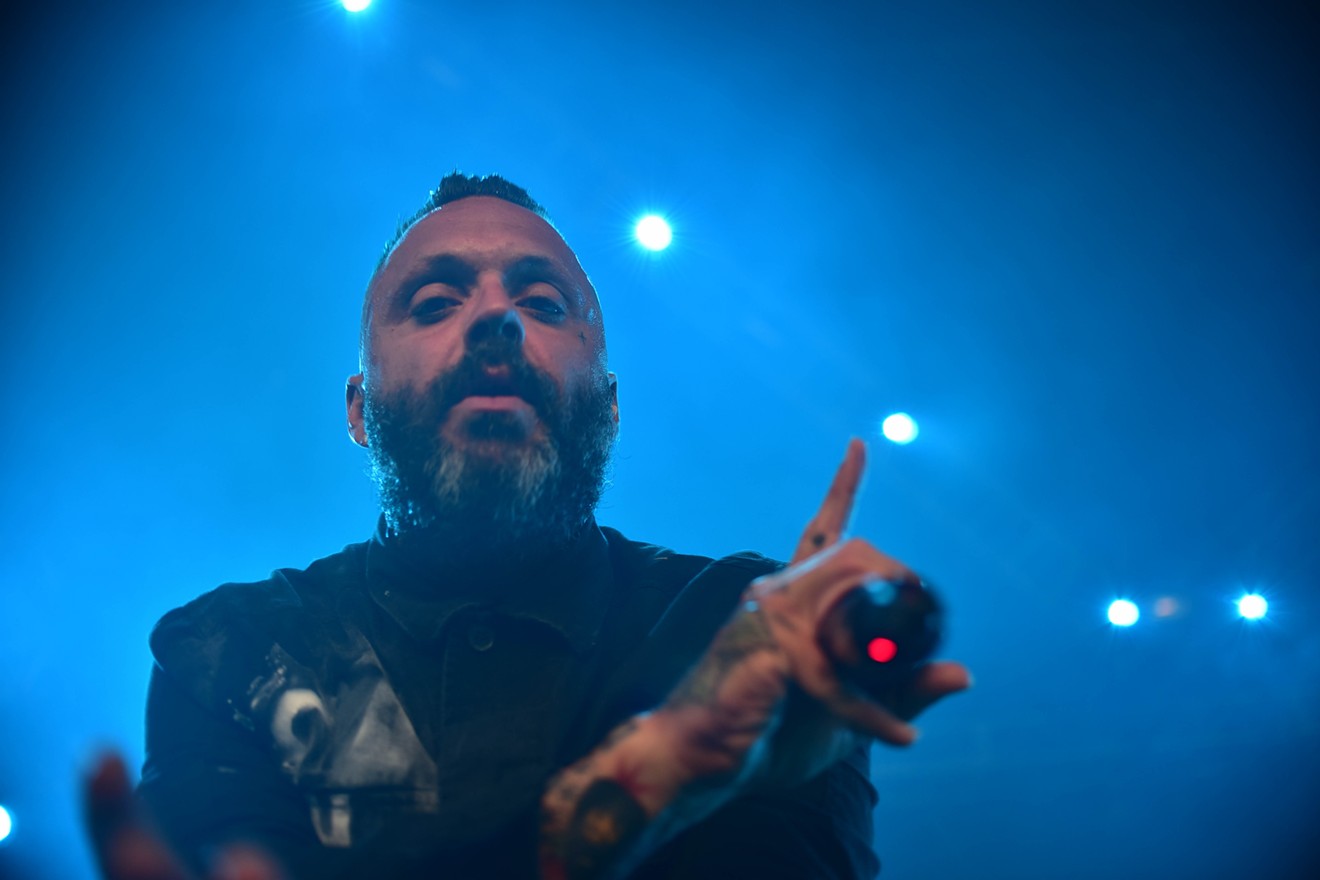 Justin Furstenfeld of Blue October at The Buzz's Bud Light Weenie Roast in 2017 Photo by Gilbert Bernal
We have multiple in-person concerts highlighted in this week’s best-of list, folks. This is not a drill! As COVID-19 vaccinations continue, more and more gigs are added to the calendars. Keep scrolling to see what’s on tap.

Aaron Lewis
Bayou Music Center – 11 March
Aaron Lewis made a name for himself as the front-man and principal songwriter for Staind, the alt-rock outfit that rose to prominence in the late ‘90s thanks in no small part to a cosign from Limp Bizkit’s Fred Durst. “It’s Been Awhile,” “So Far Away” and “Right Here” dominated the airwaves during the early 2000s before Lewis, seemingly out of nowhere, decided to try his hand at another genre. For a decade now, the New England native has made a living as a country artist. Since 2011, he has released a trio of solo albums that have been received favorably by even the most apprehensive listeners. The powerful vocalist and self-declared "Northern Redneck" visits Bayou Music Center this Thursday.

St. Paul And The Broken Bones
Live-Streaming – 12 March
Since the release of Half The City in 2014, St. Paul and The Broken Bones have been darling children of vintage soul enthusiasts. Formed in Birmingham, the Southern blues outfit has written three records’ worth of retro gospel, complete with a pristine brass section. Vocalist Paul Janeway’s soulful vocals – which have been favorably compared to those of James Brown – helped catapult the band into the hearts of countless listeners, who can watch them live-stream a performance from The Alabama Theatre on Friday.

Free Nationals
Live-Streaming – 12 March
Best known as Anderson .Paak's live band, Free Nationals are a funky, soulful quartet with talent to spare. Inspired by the likes of Stevie Wonder, B.B. King and Herbie Hancock, the group's career has been built on collaborations, and their self-titled debut album only bolsters that reputation. Featuring guest appearances from the late Mac Miller, T.I., Chronixx and more, the band's first proper recording was a delight. One year to the day from their last visit to Houston, Free Nationals will live-stream a show from Los Angeles this Friday.

Vocalist Justin Furstenfeld of Blue October records is back at White Oak Music Hall, bringing his own special brand of angst and openness — as well as a turn toward the positive in the last few years as seen in "Home," "I Hope You're Happy" and "This Is What I Live For." This Friday and Saturday, Furstenfeld will perform at White Oak Music Hall’s GRID Concert series, which will adhere to the city's recommendations for outdoor public gatherings.

Pete Yorn
Live-Streaming – 13 March
Shortly before the release of his seventh studio album, Arranging Time, singer-songwriter Pete Yorn and his wife welcomed their first child. After a few years of relative quiet, the “Life On A Chain” singer returned with Caretakers in 2019, which was as well received as any of his previous outings. The Garden State native will live-stream a performance via Veeps this Saturday.
KEEP THE HOUSTON PRESS FREE... Since we started the Houston Press, it has been defined as the free, independent voice of Houston, and we'd like to keep it that way. With local media under siege, it's more important than ever for us to rally support behind funding our local journalism. You can help by participating in our "I Support" program, allowing us to keep offering readers access to our incisive coverage of local news, food and culture with no paywalls.
Make a one-time donation today for as little as $1.