Can Houston Shut Up?

We live in a great time, in many ways. If you love live music, this is a great time to be alive. Because there are fewer albums being purchased, it means that there are more artists touring now more than ever before. This also means that acts, that may have skipped our city in the past, will more than likely stop here in the future.

But, with that being said, it's become painfully obvious that there are those who can't seem to stop talking, no matter who is playing or where they're playing at. Bands have always had plenty of reasons to skip our city, but when people talk during their performance, it's likely that'll be a large reason for many never coming back here again.

I see more live music in a week than most people will see in six months to a year, and there's talking at every show I see. Well, I say that but every once and a while I won't hear chatter during a set. The solo Waxahatchee set at Rockefeller's was pretty whisper quiet.

But the other night, at Continental Club, The Suffers and Dawes swung by to play a free show. Dawes, just let that sink in. Dawes, the band that backed Jackson Brown, the band that toured with Bob Dylan, and the band who Jeff Lynne of Electric Light Orchestra hand picked to be his support act for his entire Electric Light Orchestra U.S. tour. That show, was something that will never happen again. Dawes is never going to play a room as small as Continental Club, or at least they won't for another 20 years if their career dips.

Yet, from the start of their set to the finish, about half the room was talking. This show was a miracle to occur, to coordinate, and to pull off. After The Great Texas BBQ Festival had yet another rain out, Mark C Austin & The Suffers pulled this show together last minute, and that alone is noteworthy. But, to make it more enticing, the show was free and anyone could attend, not just those who were at the festival. Granted, many people waited in a line for over an hour to get in and yes, that is frustrating. But talking while both bands play? What does Houston have to do to understand that talking during a show is vile and intrusive? There's zero reason for these people to be as loud, if not louder than the bands playing.

If you want to talk, Continental Club has a very large patio to talk on. And, you could have chatted with all the members of Dawes while The Suffers played, because they were all back there talking to fans. This was a once in a lifetime experience, in a venue that's been here for over 20 years, and it cost nothing but attention. 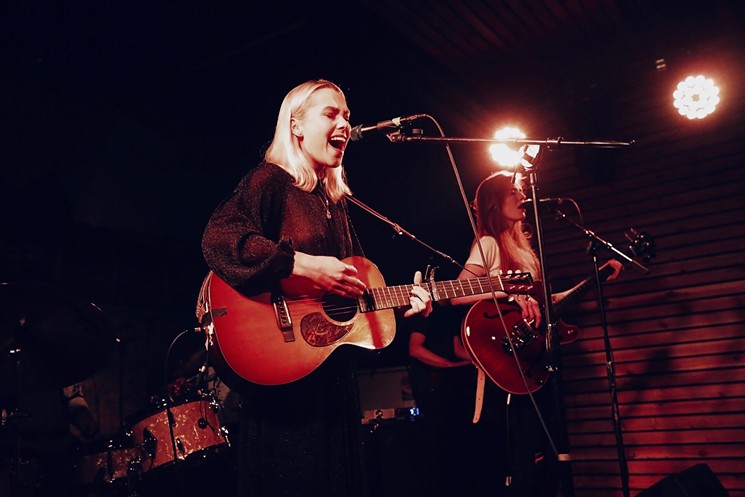 Phoebe Bridgers had to battle a rowdy Houston crowd earlier this year.
Photo by Daniel Jackson
Of course, this isn't the first time this has happened, and until people get booted for such behavior, it won't be the last. In February, L.A. native and an artist who will be bigger sooner than later, Phoebe Bridgers had to play to a talkative crowd at White Oak Music Hall. After I wrote how disgusted I was that she had to endure such rudeness, I had multiple people blame it on the room, blame it on how drunk the people were, or blame it on tickets possibly being high priced. What none of them said was the following, maybe it's because people in Houston are entitled, and they don't deserve bands to come here? Maybe it's because they're too self-involved to care about anyone else? This is being said because this show was like $15, it was at a venue run by the biggest independent promoters in Houston, and it was in their smaller room, not the big hall or their lawn.

It makes, any of us who strive to make this city better wonder, what do we have to do to get you to care? It's not just small intimate shows either, it's all over this city. There was lots of talking at Ghost at Revention Music Center, lots of talking at Babymetal at the same venue, plenty of talkers during Junior Brown and during Morris Day & the Time both at The Great Texas BBQ Fest.

You might wonder, were there talkers during Lorde at Toyota Center, or talkers during U2 at NRG? Yep, there were more than too many at both. What about during In Bloom? Yes, I had a rude couple next to me talking during Beck's set, some guys who look like they belong to a fraternity talking about why Miller Lite is better than Bud during Incubus, and people talking all over the amazing performance from Explosions In The Sky.

So, what will it take to get you to stop talking during shows Houston? Will banning you from a venue stop your conversations? Will kicking you out that night be enough? Or will what will more than likely happen, artists skipping our city for over a decade be enough to get you to finally shut up or go outside? The choice is yours. If you're not there for the music, please leave so those of us who are there for it, can actually enjoy it.
KEEP THE HOUSTON PRESS FREE... Since we started the Houston Press, it has been defined as the free, independent voice of Houston, and we'd like to keep it that way. With local media under siege, it's more important than ever for us to rally support behind funding our local journalism. You can help by participating in our "I Support" program, allowing us to keep offering readers access to our incisive coverage of local news, food and culture with no paywalls.
Make a one-time donation today for as little as $1.