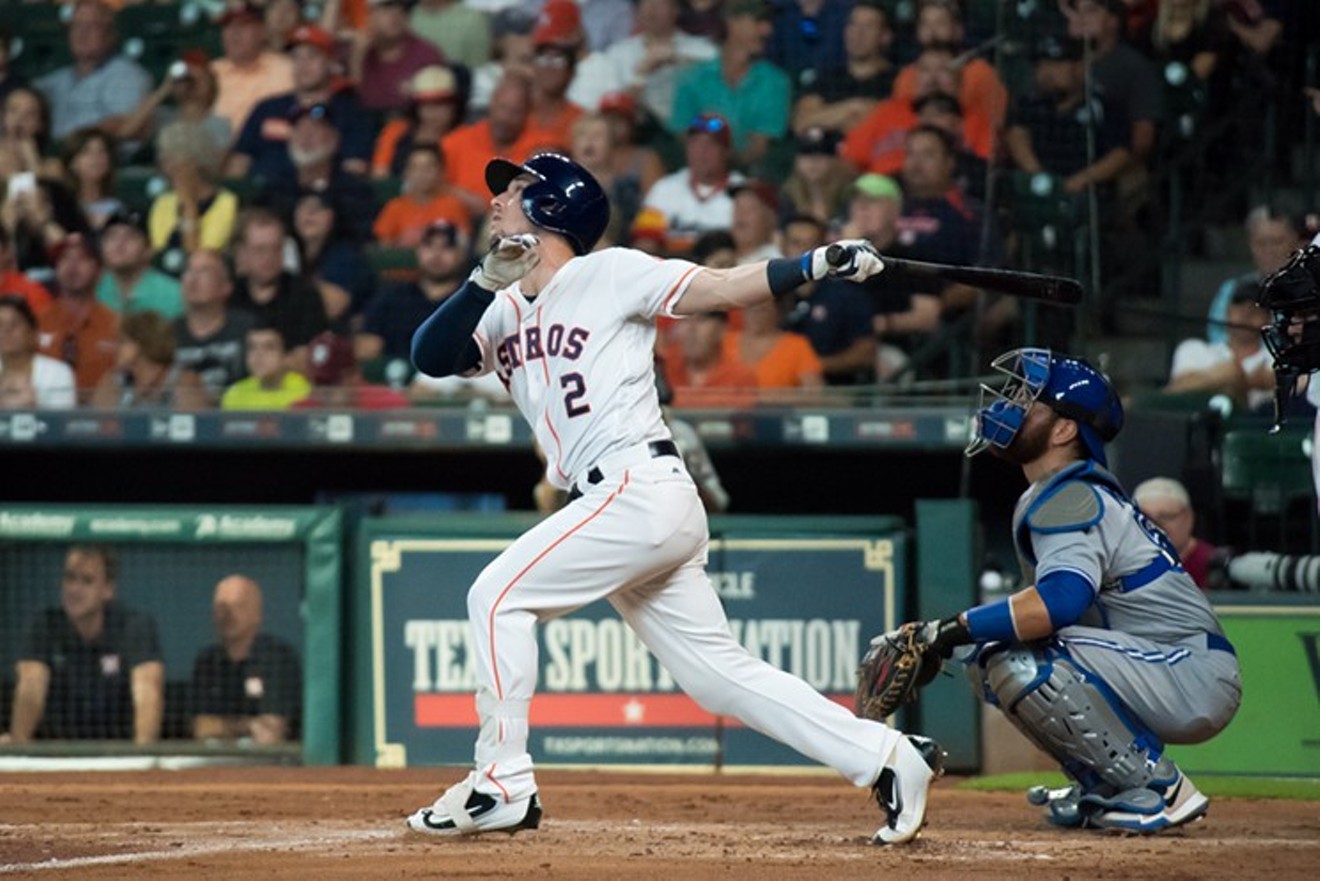 Alex Bregman's walk-off single in game five of the 2017 World Series is one of the greatest of all time. Photo by Jack Gorman
As we continue to wait for sports to begin playing games again, we are forced to think about better days when sports were a constant companion and there wasn't enough time to watch it all. In late spring and early fall, in particular, it could be tough to decide what to watch on any given day. Now, as the days stretch out before us with no live sports for a least a little while longer, it got us to wondering what games we might choose to watch if we had a library of games at our disposal.

For the Astros, many of the best games are recent. Setting aside the sign-stealing scandal, there is no questioning some of the incredible post season games they put together over the last few years. As a result, these recent teams dominate our list of games to watch, but not entirely.

Verlander is on a list of all-time great pitchers to wear an Astros uniform. Arguably, it was the last-second trade that brought him to Houston that cemented their World Series run in 2017. With two no-no's under his belt already, getting one with the 'Stros after already earning a ring was special. No-hitters are becoming rare simply due to the lack of longevity among pitchers. Verlander is a throwback, routinely throwing 200 innings per season. In 2019, in Toronto, he walked a single batter and had 14 strikeouts in his third no-hitter, the second in the Blue Jays ballpark. He became only the sixth pitcher to throw at least three no-hitters joining another former Astros great in Nolan Ryan.

The Astros were up two runs in the ninth inning, appearing ready to head to their second world series in three seasons, when DJ LeMahieu tied the game with a home run. It was an absolutely stunning moment in an eventful series of games dating back two seasons between Houston and New York. But, at home in Minute Maid Park, the Astros had the bottom of the ninth and Jose Altuve due up. He launched a pitch from brilliant closer Aroldis Chapman to walk off the game and series winner. This game came with its share of controversy later — how could Altuve crush Chapman's pitch...did he not allow his shirt to be ripped because he was wearing a buzzer to cheat? — but in the moment, it was the single greatest walk-off home run in Astros history.

The first victory to clinch a world championship could not be left off this list, particularly in a series as gripping as the one between the Dodgers and Astros. With the series tied and back in LA for game seven, it was really anyone's guess as to the outcome. George Springer was magnificent with a double and a two-run home run as the Astros mounted a five-nothing lead. But it was the gutsy pitching of Lance McCullers, Jr., Brad Peacock and Charlie Morton that ultimately shut down the Dodgers and gave the Astros franchise its first ever title.

Now, we dive back into the history books for this one. Mike Scott and his ridiculous split-finger fastball was on the mound against the Giants in what could be the clinching game of the American League West. After putting two men on base with a walk and a hit batter, Scott rolled with 13 strikeouts and a no-hitter that would propel the Astros back into the postseason. It was, and remains, the most dramatic no-hitter in Astros history.

The best game on this list might be one of the greatest games in baseball history. For fans, casual or otherwise, this was spectacle that went into extra innings before ending with an Astros win 13-12 in the tenth. It featured 14 pitchers, including starters Clayton Kershaw and Dallas Keuchel, who gave up a combined nine earned runs in under five innings each. The Dodgers were up 4-0 before the Astros went for four runs in the fourth. Both teams had three runs in the fifth. Four more for the 'Stros in the seventh wasn't enough, especially with three for the Dodgers in the ninth to take the lead. But, it was the bat of Alex Bregman and the speed of Derek Fisher that gave them the final run in the tenth to win an incredible and exhausting playoff game for the ages.
KEEP THE HOUSTON PRESS FREE... Since we started the Houston Press, it has been defined as the free, independent voice of Houston, and we'd like to keep it that way. With local media under siege, it's more important than ever for us to rally support behind funding our local journalism. You can help by participating in our "I Support" program, allowing us to keep offering readers access to our incisive coverage of local news, food and culture with no paywalls.
Make a one-time donation today for as little as $1.