You Wanna Ride? A Look Into The Carnival's Scariest Rides 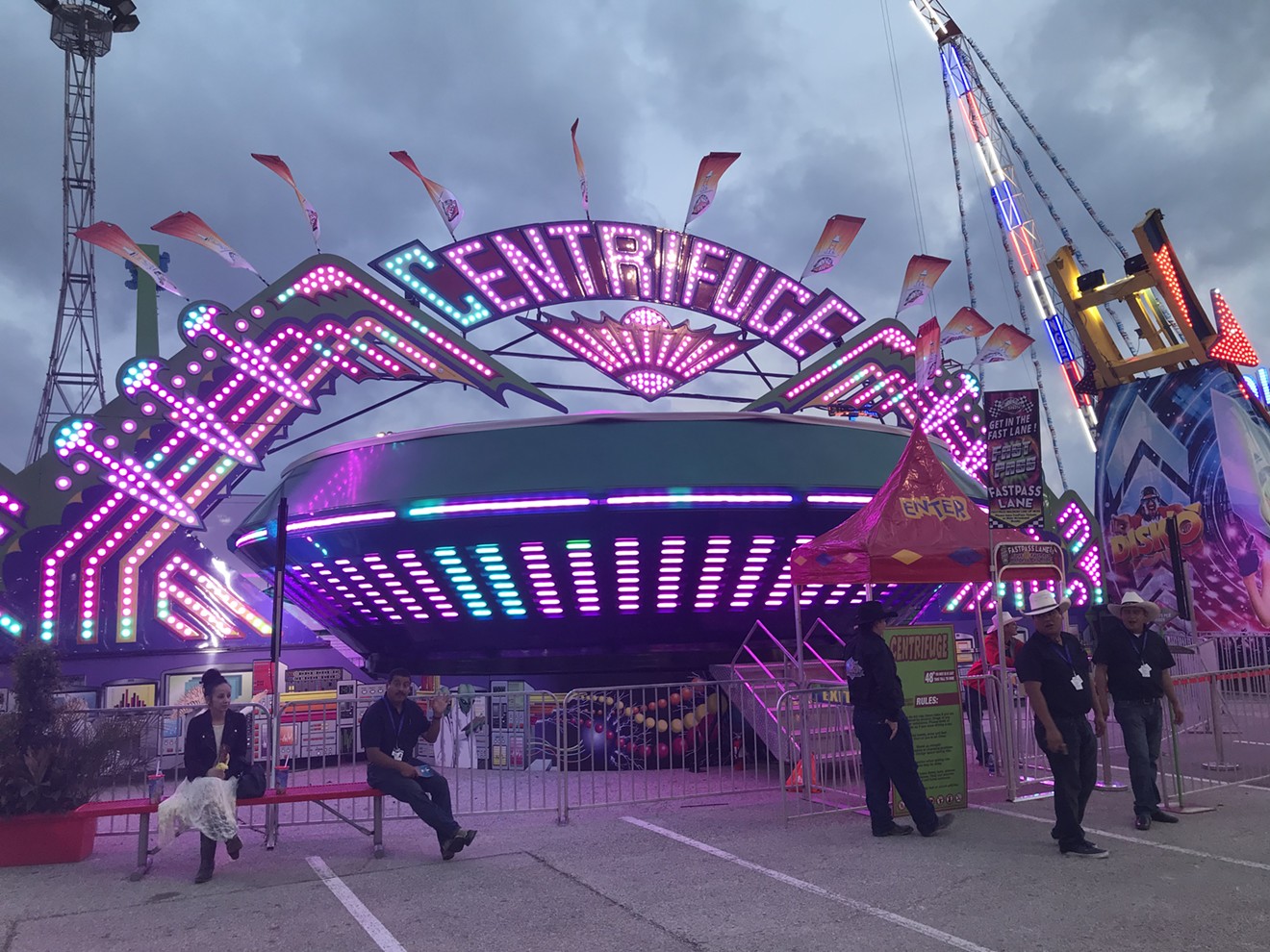 Club Centrifuge. Photo by Kate McLean
Valentine's day has come and gone and the real opportunity to prove yourself to your significant other has arrived… at the carnival. Oh yes, if you're into feeling vulnerable, the carnival makes for a great first date, that or a rowdy playground for you and your friends.

"I'm not here for the teacups," I told Chris Lopez, my carnival liaison. I pulled out a crisp Benjamin and told him if he could make me cry, throw-up, pee my pants, or back-out on any ride, it was his. "That's not necessary," he said laughing awkwardly as he handed me a stack of single ride passes and sent me on my way. And so my journey to find the scariest rides at the carnival began…

There are several rollercoasters at the carnival, Windstorm is the scariest. The ticket scanner voluntarily advised riding in the front for a better view and the back for a rougher ride. I marched to the back and took my seat, ignoring the attendant motioning for me to sit in the front. He walked back slowly and cocked his head, saying, "what, are you too scared?" I purposely glared at him while responding with sass, "no, that's why I'm in the back."

The tell-tale click, click, click prepares your senses for speed and while the initial dip isn't terrifying, it's clear they are working up to it, and they do deliver. Windstorm is on the jerky side of the carnival rides, but if rollercoasters are your deal, this is the one to try. 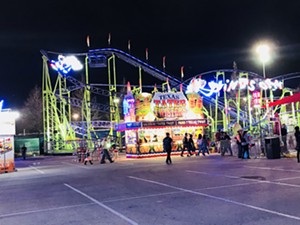 Windstorm is the scariest rollercoaster.
Photo by Kate McLean

Both higher-ups for Ray Cammack Shows (RCS), the company that operates the carnival, recommended Speed or Mach 1 as the scariest ride (they are the same.) It looks like a propeller and seats four people on each side. During peak carnival hours this ride will have the longest wait. Correction: the camel ride will have the longest wait. Mach 1 rotates you slowly up and then proceeds to swing you around faster and faster, lifting you the highest you can possibly be at the carnival.

While it is fast, I never felt my stomach drop if that helps. As the other end of the propeller is unloading and loading you are stuck at the tippy-top for about one minute. It could be the most quiet and beautiful minute you've had in a while.

Of the rides that employ the claw type seating, the newest, Extreme Energy, is the fastest. G Force (14 tickets), OMG! (14 tickets), and Insanity 360 (16 tickets), all felt a touch slower. Insanity 360 has a leg up on the others because it suspends you completely upside down for a few moments, and also plays the loudest music. Extreme Energy goes from smooth stomach drops to I don't know where my stomach is right now. I'm willing to bet the majority of murder shrieks come from this ride. Highly recommend.

The Konga is a new ride to the carnival and employs the bench seating technique. Loud beats from Cobra Starship amp your senses and the ride begins by whipping the bench clockwise while moving up and down. Your body is definitely moved by gravity and a small loss of stomach is felt, but the constant clockwise repetition makes it less scary and more pleasant. Konga is a great ride to start with because it's fast but not am I going to die? fast. It also lasts longer than most. 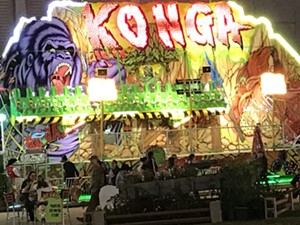 This one came the closest to scaring me. The Mega Drop gets you mentally and physically, but more so mentally. Before you click in to most rides the uncertainty of its movement can be comforting. Everyone knows that the Mega Drop lifts you up and lets you fall. That's it. Black and white.

The ride slowly raised us up as the sun set beautifully through the clouds and Aerosmith's Cryin' played its most heart-wrenching verse. Higher and higher we went until I realized, oh, this is the highest ride at the carnival. We all got a little vocal the higher it  went until it stopped and held us in place for five dreadful seconds. Then you drop, but perhaps it pulls you down a little until stopping at the very. last. second. This ride is never over as quickly as you think it'll be.
click to enlarge 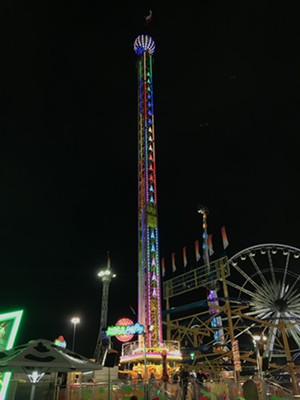 The Mega Drop: best make your peace before getting clipped in.
Photo by Kate McLean

One of my favorites, the Club Ride, looks like a spinning diamond from the outside. Riders pile inside and line up on morgue slats, no seat belts needed as this ride relies on centripetal force to scare. As the door closes the ride operator, located safely in the middle, flashes lights while cranking Skrillex. The faster you spin the more paralyzed you feel and then all of a sudden the morgue slats slide your body up a few feet. The ultimate. For just one moment, you feel exactly like you've been in the club for three hours… and then the doors open and you go on your merry way.

The Sling Shot is a two-person ride and like the bungee-jumping, camel rides, and mutton busting you must pay in cash or credit card. The strap-in procedure is vigorous with many different safety clicks. When you're nice and snug with your partner (hi Nathaniel) the attendants step back and look at you, smiling. Instantly, you are snapped high into the air and as you begin to fall, the wire line slowly lowers you down and whips you up a final time, and then it's over.

Had they incorporated some Mega Drop feels, it would have been the scariest ride, but without the sense of falling it really wasn't that scary.

I technically did not ride this because as I giddy'd up to the entrance, pumped and ready to go, the straight-faced gentleman could only point at the sign that said "no single riders." I even mouthed please, but still he pointed. I looked around and all I saw were families so I let this one go, but from what I remember the Zipper invented the stomach flip. 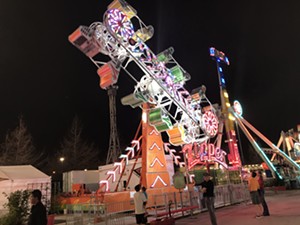 If you're a single rider you might as well pack it up and head home to your single apartment to drink your single bottle of wine.
Photo by Kate McLean

A good rule of thumb: the rides that cost the most amount of tickets are the scariest. Here's a rundown on what you're looking at in terms of ticket pricing…

Lines are typically shorter at the opening of the carnival and during the concert. A Fast Pass, which will expedite your wait time considerably, costs $25 and is good for that day only. However, if you don't want to spring for a Fast Pass, and also, don't want to wait you can try these one-liners…
Good luck out there, carnival-goers. 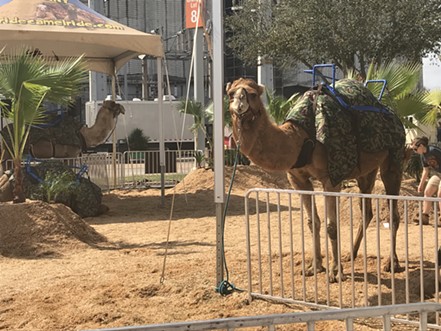 Yes, I am also a ride.
Photo by Kate McLean