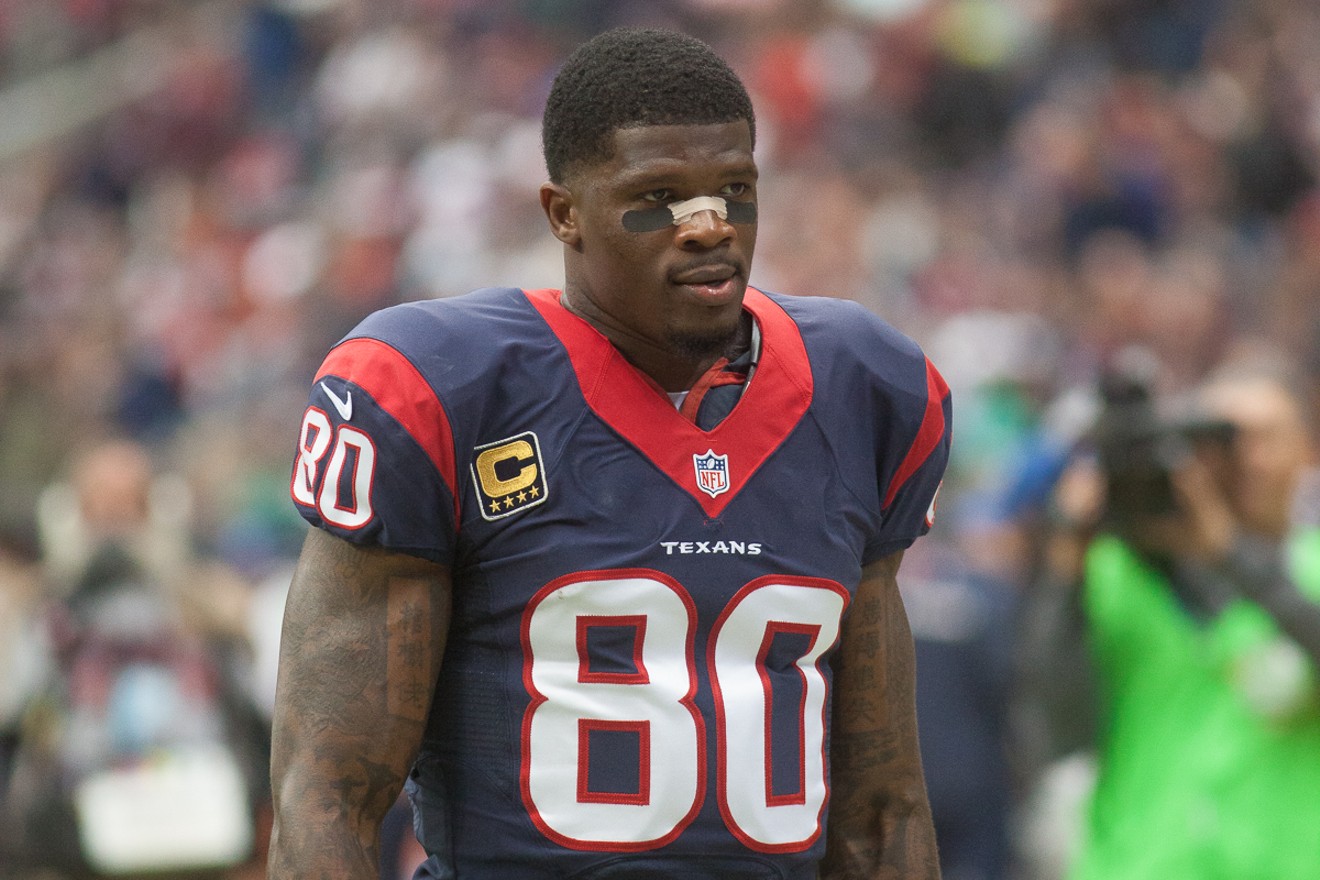 Andre Johnson is back among the nominees for the Pro Football Hall of Fame in 2023. Photo by Eric Sauseda
Last year, former Houston Texans wide receiver Andre Johnson made a pretty good run at induction onto the Pro Football Hall of Fame, making it to the final ten names among the modern day candidates. Alas, he was not one of the five inductees, but it was his first year on the ballot, so his exclusion was not unexpected.

Johnson will get in one day, sooner rather than later, and the journey down the road of his second attempt began yesterday, as the Hall of Fame revealed the 129 nominees on the ballot for the 2023 class, which will be chosen in and revealed in January, and inducted next summer. Here is the full list, with further thoughts down below:


*Finalist in 2022. Underline indicates first year of eligibility. (Players must have last played at least five full seasons ago to be eligible for nomination. Therefore, any individual who last played in 2017 is eligible for the first time in 2023.)

OK, a few, very Texans-centric thoughts on the list above:

What are Andre Johnson's chances in 2023?
I would guess about the same as last year, which is to say, it's probably a coin flip's chance that he gets in on the second try. Unlike last year's ballot, there are at least two first timers who are viewed as first ballot Hall of Famers, tackle Joe Thomas and cornerback Darrelle Revis. On top of that, Johnson's position group, wide receiver, is flush with candidates who have been waiting longer than Johnson has, specifically Torry Holt and Reggie Wayne, both of whom, like Johnson, are former finalists.

Another former Texan is a first timer on the ballot, and he should make it (someday)
I mentioned Thomas and Revis as first timers on the ballot, but go ahead and also add former Houston Texan and Texas A&M Aggie punter Shane Lechler. The six-time first team All Pro as an Oakland Raider, would be the second punter to gain induction into the Hall, joining another former Raider, Ray Guy. It took Guy forever to gain induction, so I would suspect Lechler will have to wait around for at least a few years before getting the call from the Hall.

In fact, there are several former Texans on here
There are several other former Texans on this list of nominees, most of whom are probably viewed as short time Texans and more significant members of other teams' histories. (Actually, that probably applies to Lechler, too.) The one that's probably a coin flip is fullback Vonta Leash, who made the Pro Bowl as a Texan and a Baltimore Raven. Vince Wilfork was a productive member of the 2015 and 2016 Texans. Jake Delhomme, Jeff Garcia, and Derrick Mason, all partial members of the 2011 Texans, round out the list.

Arian Foster, when healthy, was better than any of the running backs on here
Look, I realize Arian Foster is not going to the Hall of Fame, and his overall body of work likely doesn't justify it. He just missed too many games, and had too short a career, while playing for a team that topped out at the divisional round of the postseason with him on it. However, I would put a healthy Arian Foster up against ANY of the backs on this list. In other words, he should at least be nominated on a list of 129 guys. Foster was the best back in football for a majority of a three season period between 2010 and 2012.