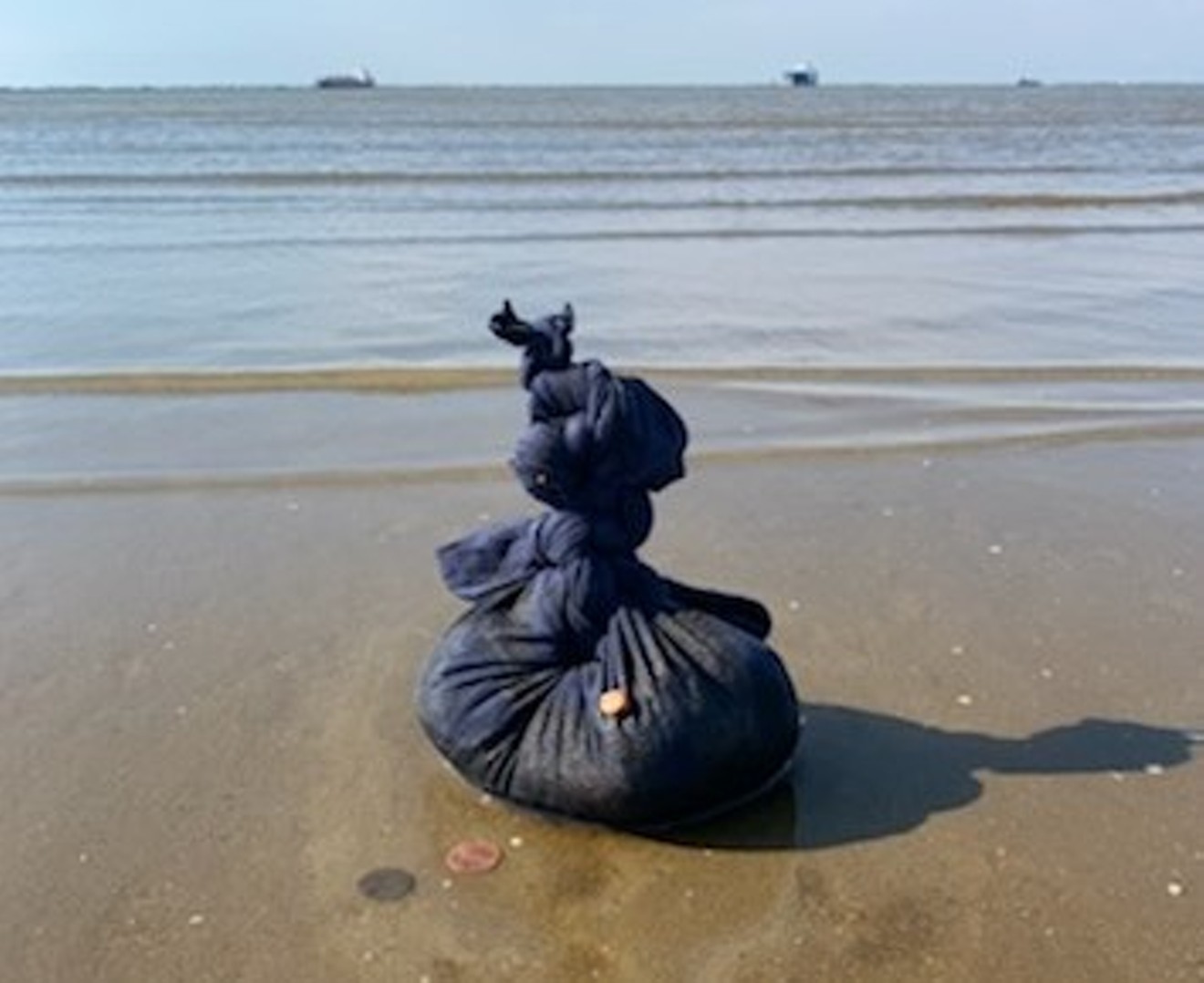 A mysterious bag in Galveston. Photo by Autumn Smith and J.D. Hartman
On Wednesday, August 5 at 2 p.m., Houston artist Autumn Smith and her boyfriend J.D. Hartman were walking on the trails in the East End Lagoon Nature Preserve. Because the trail is fairly short and they wanted to get a bit more exercise, they decided to wander off the beaten path down to the water. There, they found what looks to be evidence of a Santería animal sacrifice.

“We thought it was a bag of trash, but [Hartman] noticed it was weird,” says Smith. “It really creeped me out.”

What they found was a cloth bag neatly tied up. Surrounding the bag were coins, uncooked corn, shards of a coconut, and tealights. Not far from the bag they found the fresh, uneaten corpses of three animals, a large chicken, a turtle, and a black bird they couldn’t identify. The corpses were neatly arranged together with more coconut shards and tealights close by.

Santería is a polytheistic religion of Caribbean and African origin that is popular along the Gulf Coast. In 2009, a legal case in North Texas led to Jose Merced revealing many of the inner secrets of the religion, including its penchant for animal sacrifice. The killing of goats, turtles, and birds is commonly mandated on behalf of the supreme god, Olofi, who is said to be able to heal the sick. Splitting, chewing, and spitting the meat of a coconut into the ears of the animals is also part of some rituals, as are the use of cloth bags.

Neither Smith nor Hartman looked in the tied bag to see what was inside.

Officials in Galveston deny the scene was a ritual sacrifice. Galveston Game Warden Mack Chambers said he had received a phone call from a hysterical woman claiming to have found evidence of animal sacrifice. Smith says she never actually reached a game warden when she tried to phone in her find, afraid that children would stumble across it. It's possible that another person reported the find as well.

Chambers said that the dead animals he found were clear evidence of a coyote and denied even seeing the bag as pictured  below. Coyotes tends to consume virtually all of their prey, including the leather collars of pets. It would be odd for them not only leave the relatively whole corpses that Smith took pictures of or group them neatly together.

Lieutenant Kelly Freeman of the Galveston County Sheriff’s Office says that there have been no incidents of animal sacrifice on the island in years. According to Freeman, the last case was in 2013, when a man was ritualistically killing cats.

Even if the scene that Smith and Hartman found was evidence of Santería, it’s not clear any crime was committed. Chickens as domestic animals can be killed, and Warden Chambers says turtles are legal to hunt. The Merced case enshrined Santería as a protected religion, though only within the home. It is possible that the hypothetical practitioner could be guilty of littering when crafting the bizarre scene near the water’s edge.

See more pictures taken by Smith and Hartman below. 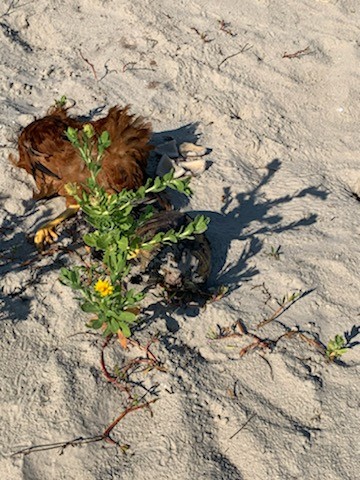 A dead chicken.
Photo by Autumn Smith and J.D. Hartman

Coins, candles, and corn were arranged around the bag.
Photo by Autumn Smith and J.D. Hartman 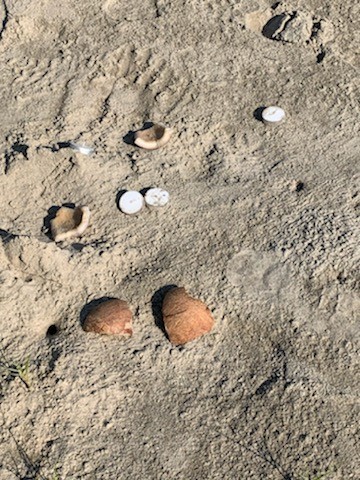 Coconuts play an important role in Santería rituals.
Photo by Autumn Smith and J.D. Hartman
KEEP THE HOUSTON PRESS FREE... Since we started the Houston Press, it has been defined as the free, independent voice of Houston, and we'd like to keep it that way. With local media under siege, it's more important than ever for us to rally support behind funding our local journalism. You can help by participating in our "I Support" program, allowing us to keep offering readers access to our incisive coverage of local news, food and culture with no paywalls.
Make a one-time donation today for as little as $1.