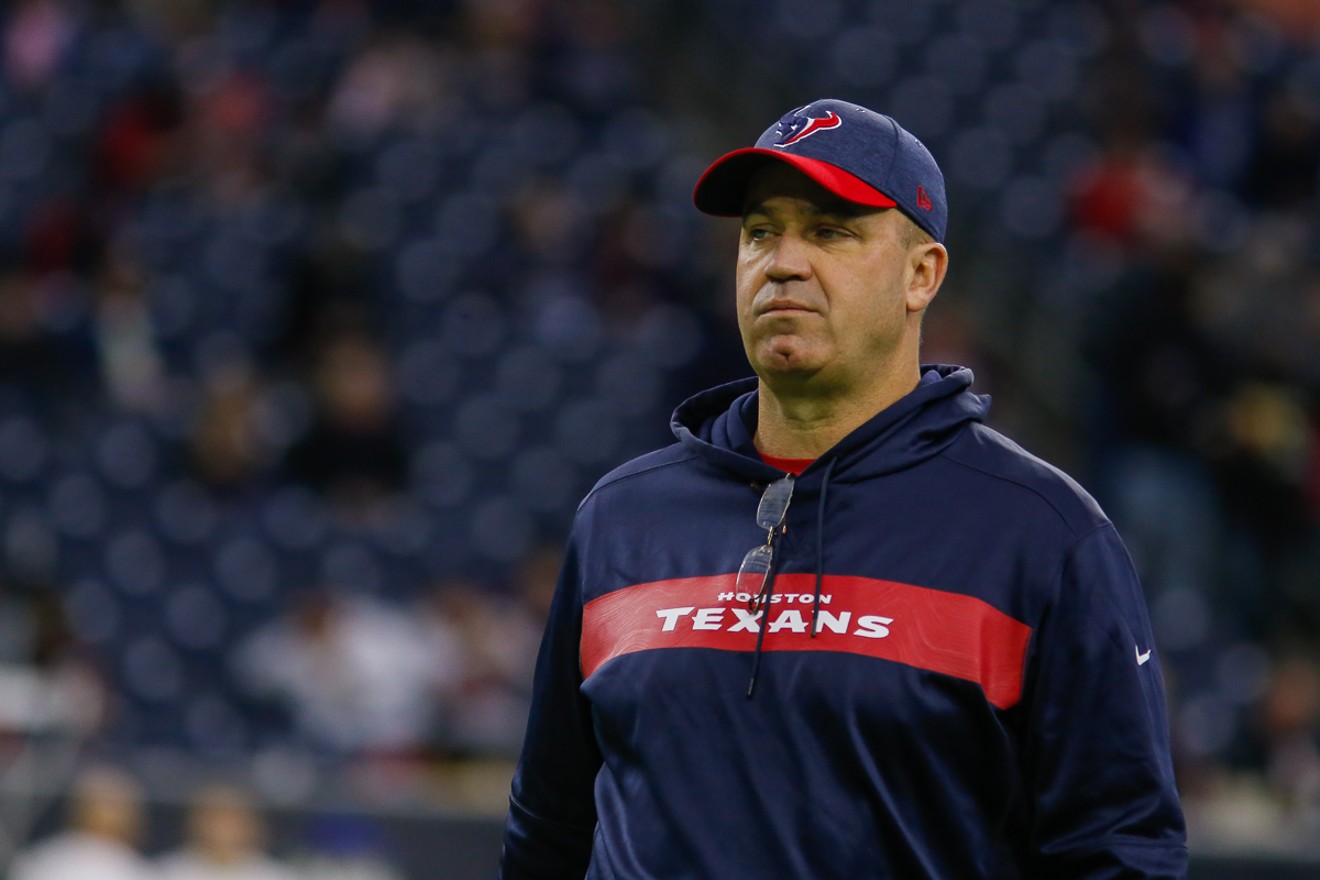 Bill O'Brien has big issues with getting this team motivated coming off big wins. Photo by Eric Sauseda
The best place to start with a disaster like the Texans' disastrous abomination of a loss to the now 5-8 Denver Broncos — final score 38-24, in a game where they fell behind 38-3 — is on Friday. I don't do this often, in part because I'm not right nearly as often as I'd like to be, but here were my words of warning on this game in my post from Friday morning:

4. Letdown potential
Prior to the win last weekend over the Patriots, there have been three points in this season where public confidence in the Texans spiked following their performance. Oddly enough, in Week 1, people were more bought in on the Texans following a close loss to the Saints on a Monday Night. After Week 3, the win in Los Angeles over the Chargers elicited major confidence. Finally, after the Week 6 win in Kansas City, some fans were talking Super Bowl. Here is the problem — the Texans followed each of those wins with three of their worst performances of the season:

Hopefully, the effect of beating the Patriots is more of a buoyant effect than a letdown-inducer, and to be clear, I am picking the Texans to win this game —- they're just that much better than the Broncos, especially at home — but it wouldn't shock me if the Broncos hung around in this one.


On Sunday, the Texans outdid themselves. Their performance Sunday, which began with the linebacking corps showing up in ridiculous costumes (again), continued into a first half where they were down 31-3, and ended with a fourth quarter where Deshaun Watson piled up the most meaningless couple dozen fantasy points in the history of fantasy football, was a complete and utter disgrace.

The bottom line with the Texans comes down to this — they can't be trusted. They suck you in, make you believe, skull drag the Patriots for 95 percent of a prime time game, and then come back the next Sunday and play like they're all drunk. Not hungover, like actually drunk. Like Jack Daniel's in the Gatorade cooler drunk. They should be embarrassed, every player and every coach.

All this means that they will probably beat the Titans in Tennessee next Sunday. Onto winners and losers....

4. Kareem Jackson
One of the big subplots of Sunday's game was the dual revenge tour of Texans CB Bradley Roby and Broncos safety Kareem Jackson against their former teams. If you recall, the Texans decided that Jackson wasn't even worth a contract offer this past offseason, despite nine mostly really good years with the Texans since 2010. Well, Jackson win that battle hands down. Roby was part of a secondary that gave up over 300 yards to a rookie quarterback making his second career start. Jackson scored a game-swinging touchdown to make it 14-0 off a Bronco fumble recovery, had several passes broken up (including a skull rattler on DeAndre Hopkins on a third down in the first half), and sealed the deal in the fourth quarter with an interception. Jackson is a lock to be the AFC Defensive Player of the Week.

3. Matt Rhule
We interrupt this Texans disaster to give props to Baylor head football coach Matt Rhule, who despite an overtime loss to Oklahoma in the Big XII title game, will take his Bears to the Sugar Bowl for a matchup with, what I'm guessing will be a somewhat ambivalent Georgia squad. Rhule inherited a program decimated by the aftermath of the sexual assault scandal under Art Briles, and took them from 1-11 two years ago to being one of the last six teams standing for the College Football Playoff when they woke up Saturday morning. Baylor folks, I hope you enjoyed the Matt Rhule Era, because I am guessing there is an NFL head coach parking space reserved for him somewhere this offseason.


Thank you @BUFootball fans for showing up today. I know you’re disappointed but I hope you’re Proud as well.

Congratulations to @OU_Football on their Win today. The @Big12Conference plays DEFENSE and great football

We look forward to cheering the Sooners in the @CFBPlayoff ?????


2. Shirtless LSU fan
Because there are literally no winners from the Texans in this game, let's keep things moving with some lighthearted collegiate fun. How about this shirtless guy photobombing this poor (and sneaky attractive) reporter following LSU's blowout win over Georgia....

1. Drew Lock
Lock is now 2-0 in the first two starts of his career, and if the early indications are valid, perhaps John Elway has finally, after SEVERAL attempts, found his franchise quarterback, the first one since the Broncos soaked the last four seasons out of Peyton Manning's career. Just a week after a win over the Chargers where he averaged under five yards per attempt, Lock was raining explosive plays all over Romeo Crennel's defense, and beating the Texans with his legs, too, when given the chance. He finished 22 of 27 for 309 yards. He spread the ball around to ten different receivers, and on a Texans' schedule that includes Drew Brees, Philip Rivers, Patrick Mahomes, Lamar Jackson, and Tom Brady, he put up a passing performance that outdid, or at least stacked up, against all of them. Lock was great.

4. Will Fuller's soft tissue
Another Sunday, another tweet from Ian Rapoport giving us this news to wake up to....

3. Romeo Crennel
As good a job as Crennel did coming up with a scheme to shut down Tom Brady and Julian Edelman last week, his defense got skewered, torched, and charred on Sunday. In the first  35:45 of the game, the Texans gave up seven explosive plays in the passing game. The shortest one was 23 yards, the longest was 48 yards, and there were all shapes and sizes in between. Infuriatingly, exactly ZERO of them were to the Broncos top pass catcher, Courtland Sutton. Instead, five of them went to tight ends and running backs, and the other two went to secondary receivers. The Texans sacked Lock exactly one time, and it came with the Texans trailing 38-17 (AIR GUITAR CELEBRATION, YO!). The Broncos scored on their first six possessions. This was a disgrace, and the Texans' defense is going to be a problem the rest of the season.


Texans linebackers dress up together on gameday.

The Texans' linebackers won Halloween last night. Unfortunately, it was December 8. Here's hoping that the next game they are dressed as actual football players. Oh, also, Whitney Mercilus, the rules on celebrating sacks with your little air guitar deal is this —- you can do it if the Texans are winning or within one score. Down 31-3? Um, no.

They’re getting closer and closer to 3 yards per play! WHOOPEE!!!

This, too, is a disgrace. Honestly, at the last home game, they should let a random fan call the plays. Or allow a returning soldier to do it as a Christmas gift. Anything is better than what the Texans are doing with O'Brien calling the opening drives. As for the rest of the game, the worst part about this is the futility that Texan fans must feel. The level of trust you have in your team largely boils down to two people — the quarterback and the head coach. The trust level is high with Watson, despite today's outcome. The trust level is practically zero with O'Brien, who follows up a masterful game of play calling against a great Patriot defense with a game where he is throwing the ball on 3rd and 1, and 4th and 1, at his own 35 yard line, down 24-3. (Right call to go for it, horrific play calls) The worst part about this game, other than the circle of hell that Texan fans live in for the next five days after a game like this, is the opportunity squandered. The Chiefs beat the Patriots on Sunday, which means if the Texans had just handled their own business today, they'd be a game out of the No.2 seed. As it is now, they're in a dog fight just to hang onto the division and the four seed.

The bottom line is this —- in a season in which the Texans have beaten the Chiefs and the Patriots, their overall record should be a whole helluva lot better than 8-5. That is squarely on Bill O'Brien.