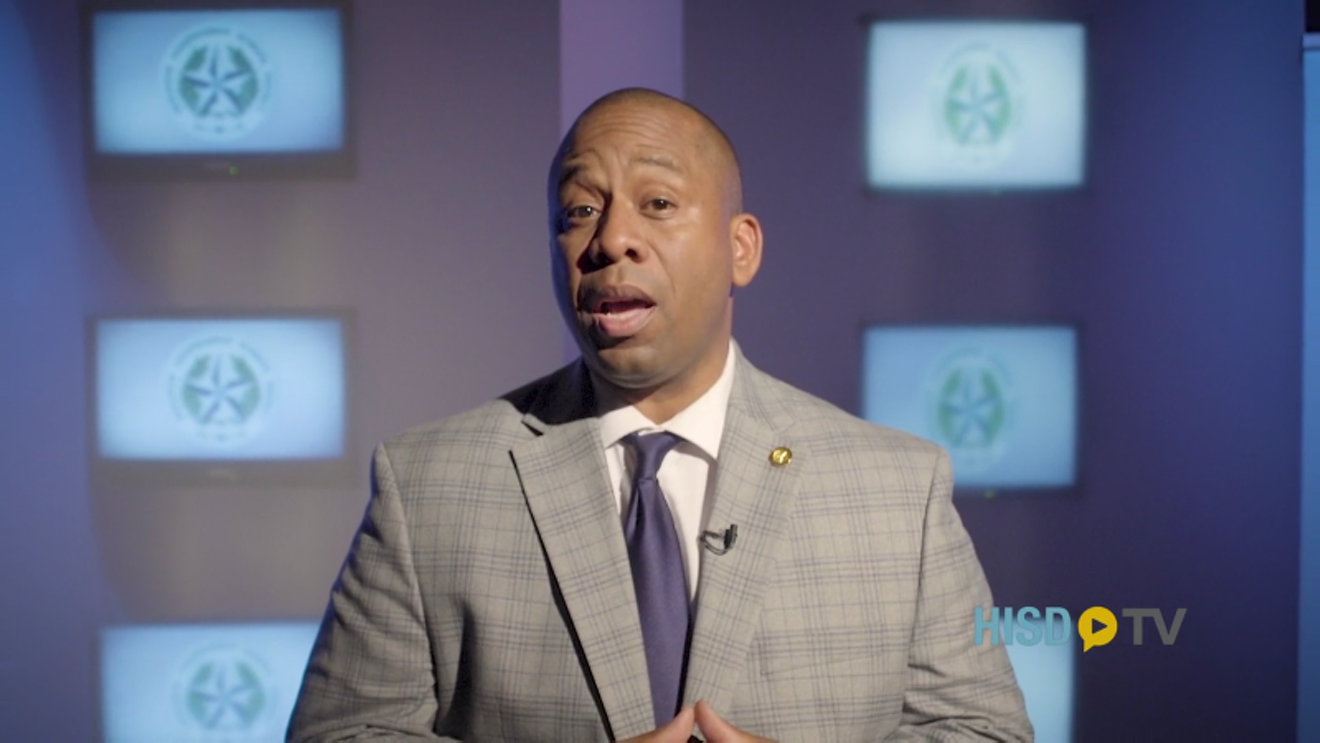 Millard House II hopes Houston ISD's board will approve his new mask mandate later this week. Screenshot
As the Delta variant of COVID-19 continues to ravage Texas and the greater Houston area with the fall school year fast approaching, local education leaders in Houston and in some of Texas’ other largest school districts have chosen to push for sweeping new mask requirements for students and staff, despite Gov. Greg Abbott’s executive orders barring such mandates and recently issued guidance from the Texas Education Agency mirroring Abbott’s mask rule ban.

Houston ISD Superintendent Millard House II started the wave of major Texas school district’s bucking Abbott’s orders when he announced last week that he would encourage the full HISD board to approve a new face mask requirement for all students and staff on HISD campuses, school buses and other facilities during Thursday’s scheduled board meeting. Dallas ISD followed suit Monday morning by issuing a mask mandate of its own, and Austin ISD may decide on a new mask requirement in an emergency Monday meeting.

The TEA did not immediately respond to a request for comment Monday from the Houston Press about the new mask requirements proposed by Houston ISD’s House and implemented by Dallas ISD.

House pushed for an HISD mask mandate once Harris County raised its COVID-19 threat level to red alert last Thursday following weeks of startling increases in new local case counts, hospitalizations from the coronavirus and massive spikes in the local test positivity rate. His decision also came after Houston Mayor Sylvester Turner chose to require city employees to wear masks when at work in city facilities, another mandate seemingly forbidden by Abbott’s order and punishable by a $1,000 fine.

On Monday, the Texas Medical Center announced a whopping 4,445 people tested positive for COVID-19 Sunday in the greater Houston area, compared to the daily average of only 398 new cases last month, and the hospital system’s weekly average test positivity rate has also more than doubled from 4 percent to 13.6 percent as of this week.

Capacity concerns amid skyrocketing COVID-19 hospitalizations at Harris County’s Ben Taub and LBJ Hospitals were so great that Harris Health has begun setting up emergency overflow tent facilities to potentially house COVID-19 patients if these troubling trends continue (and if the county can find enough nurses to staff the facilities).

Over the weekend, Harris County Judge Lina Hidalgo took to Twitter to voice her support for House’s decision to push for a district-wide mask mandate in light of the increasingly dire state of the local pandemic, calling it “a moment of necessary civil disobedience.”

“Schools have an unspoken commitment to protect the children in their care,” Hidalgo wrote. I can’t imagine the state of Texas suing school districts that require masks to keep kids safe. That would be cynical and tragic.”


Schools have an unspoken commitment to protect the children in their care. I can't imagine the state of Texas suing school districts that require masks to keep kids safe. That would be cynical and tragic.

Following House’s advocacy for a Houston school mask mandate, Dallas ISD Superintendent Michael Hinojosa on Monday officially issued a face mask requirement for all DISD students and staff effective August 10, a move the district’s school board agreed Hinojosa had the power to implement without a board vote. "Governor Abbott's order does not limit the district's rights as an employer and educational institution to establish reasonable and necessary safety rules for its staff and students," read a statement from Dallas ISD.

Meanwhile, Austin ISD has called for an emergency Monday evening meeting of the board during which the district may decide to implement an Abbott-flouting mask order of its own. According to Austin's KXAN, a recent district survey found that 80 percent of Austin ISD families plan to send their kids to school with masks on this fall, even without a formal mask mandate.

While Fort Bend ISD hasn’t publicly discussed a mask mandate of its own, the Houston area school district started planning over the weekend to offer limited options for remote classes for some students. The Texas Legislature failed to approve additional funding for districts to pay for virtual learning options during both the regular and special legislative sessions that ended in May and last week, respectively, and new guidance from TEA issued Thursday only allows districts to utilize state funding for up to 20 days of remote learning for any student who tests positive for COVID-19 or comes in close contact with an infected classmate.

Texas House Representatives Jarvis Johnson (D-Houston) and Ron Reynolds (D-Missouri City) both applauded the recent moves from Texas school leaders to push for new mask mandates and other policies to limit COVID-19's spread in remarks to the Press Monday.

Johnson implored Abbott “[to] allow these elected officials to make the decisions that they were elected to do. And if the governor wants to run for school board, why don’t you just go run for superintendent of some schools as opposed to trying to be governor?”

“I will absolutely stand with HISD,” Johnson said. “They have the right, they are the elected body. They are in charge of those children, those teachers and those schools.”

Reynolds said he “thought that was great leadership” when House voiced his support for a HISD mask mandate. “Even though they’re defying Gov. Abbott’s order, I think it is prudent for him to do that for the safety of the students and the teachers.”

“Even though they’re defying Gov. Abbott’s order, I think it is prudent for him to do that for the safety of the students and the teachers.” - State Rep. Ron Reynolds (D-Missouri City)

“And they need to go as far as a lawsuit if the governor tries to intervene through the attorney general. So I’m proud of our new superintendent,” Reynolds continued. He hopes the HISD board will approve the mandate later this week with “a unanimous vote to send a clear message that we’re going to do what’s best for our children, and not put politics into the equation.”
KEEP THE HOUSTON PRESS FREE... Since we started the Houston Press, it has been defined as the free, independent voice of Houston, and we'd like to keep it that way. With local media under siege, it's more important than ever for us to rally support behind funding our local journalism. You can help by participating in our "I Support" program, allowing us to keep offering readers access to our incisive coverage of local news, food and culture with no paywalls.
Make a one-time donation today for as little as $1.