Army Corps Needs a Do Over on the Buffalo Bayou Plan 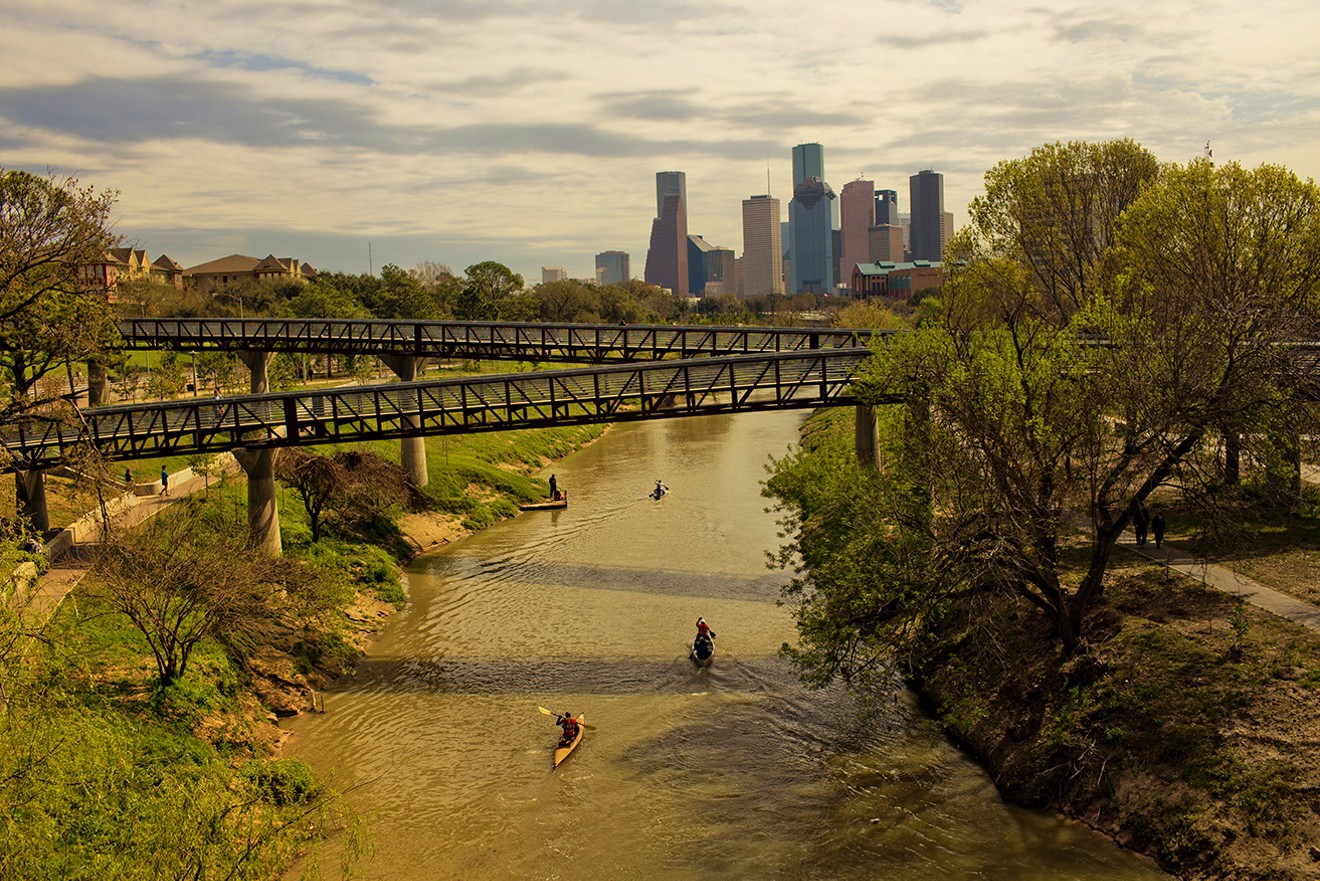 Let's not destroy Buffalo Bayou, shall we? Photo by Katya Horner
The Army Corps of Engineers recently released plans for altering Buffalo Bayou as a means of decreasing flooding — deadline for comment ends this week — has certainly stirred up emotions among Houstonians and with good reason. The plan is an unmitigated disaster that would absolutely decimate the bayou and completely reshape one of the city's great urban treasures.

That is not an understatement.

If you don't feel like digging through the linked PDF above, let's just say it looks a lot like the plans the Corps had for Brays Bayou and White Oak Bayou and other area sloughs, except the straightening and concreting of those waterways were done in the '60s and '70s for the most part. You would think that, given the advancements in civil engineering over the last 50 years, the plan might include something other than "dig the ditch bigger and make the damn thing wider," but you'd be wrong.

The Corps document reads like someone showing up to repossess your house, who tries to explain it to you as nicely as possible. We're real sorry we have to kill off all the wildlife in the entire bayou ecosystem and that it might never return but, well, that's what we are doing.

Given the city's renewed emphasis on green spaces and natural landscape, it is absolutely dismaying that arcane practices like bayou channelization would even be on the table. Even with the destruction wrought by Hurricane Harvey, the thought of rolling back the clock to a time when you poured concrete, dug deeper ditches and crossed your fingers is absolutely bizarre.

Add to it the fact that Buffalo Bayou Park, an incredible spot that literally transformed the entrance to downtown and continues to provide an urban renaissance along Houston's east end, would be practically destroyed by the plans, so much so that they have called on area residents to speak out.

Think for a moment about the Waugh Street bat colony, the largest year-round Mexican free tail gathering of its kind. That would very likely be wiped out. It even says that the bayou's turtle population could be completely eradicated, never to return.

And that doesn't even calculate the irreparable harm that would be done to the protected Katy Prairie. The Corps would like to create a third reservoir and use land from the wildlife sanctuary for it.

Before you start ranting and raving about how bad flooding is in Houston and we need to do anything to protect ourselves from future storms, keep in mind that the channelization of bayous hasn't actually prevented flooding. In many cases, it has exacerbated it. But, hey, it's cheap!

Therein lies the primary factor in the Corps report: the cost. Yes, they explored the ideas of urban tunnels to help divert water away from swollen bayous — they have similar tunnels in, for example, San Antonio — but they were dismissed due to the price tag. Keep in mind most of this will be funded with money allocated through a bond referendum that has already passed.

Keep in mind that the channelization of bayous hasn't actually prevented flooding. In many cases, it has exacerbated it. But, hey, it's cheap!

So, we can do the same things we've done in the past, making the city uglier and less safe from flooding, or we can try something different. Plan better. Make smarter decisions. Preserve the beauty that comes with the urban wildlife Buffalo Bayou provides for future generations.

The Army Corps of Engineers is built on the idea of efficiency. Do it fast. Do it cheap. Get it done. But, protecting our city from blight and the erosion of our natural green spaces should be a priority, not a line item in a spreadsheet. What we have accomplished with Buffalo Bayou Park and the Bayou Greenways 2020 initiative that has connected Houston's miles and miles of green space shouldn't be shoved aside by some bureaucratic resource shuffling.

It took decades to realize that the bayou system is more than just a place where old shopping carts go to die and treat them as the lifelines for the entire region. Let's not ruin them just as we learn to finally appreciate the wonders of nature in the fourth largest city in America.
KEEP THE HOUSTON PRESS FREE... Since we started the Houston Press, it has been defined as the free, independent voice of Houston, and we'd like to keep it that way. With local media under siege, it's more important than ever for us to rally support behind funding our local journalism. You can help by participating in our "I Support" program, allowing us to keep offering readers access to our incisive coverage of local news, food and culture with no paywalls.
Make a one-time donation today for as little as $1.