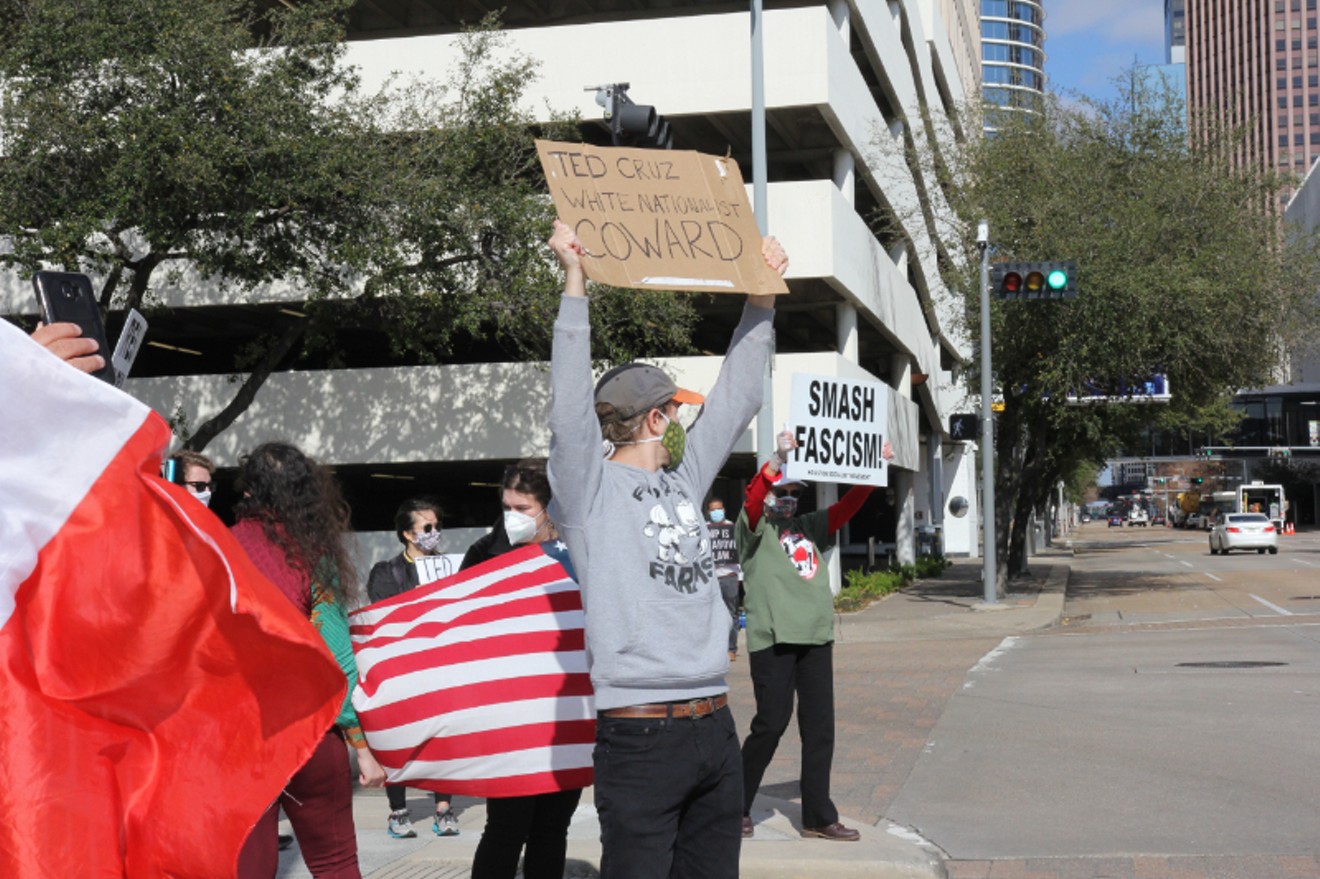 This protester didn't mince words about where he thinks Cruz's loyalties lie. Photo by Doogie Roux
There’s no denying that most of the blood spilled during Wednesday’s historic riot that overtook the U.S. Capitol and led to five deaths is on President Donald Trump’s hands.

But Houston’s own Sen. Ted Cruz also had a direct role in stoking the flames of right-wing resentment through his parroting of Trump’s roundly debunked voter fraud claims and his effort to stop President-elect Joe Biden’s victory from being confirmed, actions that helped inspire the violent mob to ransack the halls of Congress.

On Thursday, multiple protests took place across Houston to criticize Cruz for his inflammatory rhetoric and his extraordinary attempt to stop Congress from counting the Electoral College votes, a typically ceremonial step in the process upended by Cruz and his allies. 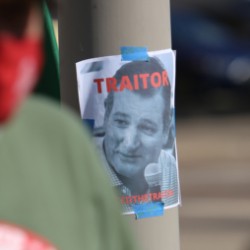 Pretty tough to misinterpret this one.
Photo by Doogie Roux
Cruz claims that just because he helped lead the effort to stop Congress from certifying Biden's win doesn’t mean he’s responsible for Wednesday’s violence. Some of his already vocal critics disagree, and are calling on Cruz to resign and repent.

At one event Thursday organized by the Houston Socialist Movement, the People’s New Black Panther Party and Houston United Front Against Fascism, demonstrators waved signs and hung posters in front of Cruz’s downtown office labeling him a “WHITE NATIONALIST COWARD,” and “TRAITOR.” Other protesters focused on the need to "RESIST TRUMP" and remove the president from office immediately.

A protester in front of City Hall at a Thursday evening rally put together by Socialist Alternative's Houston branch had a message for Cruz and Trump's other Republican enablers: "NO COMPROMISE WITH FASCISTS." 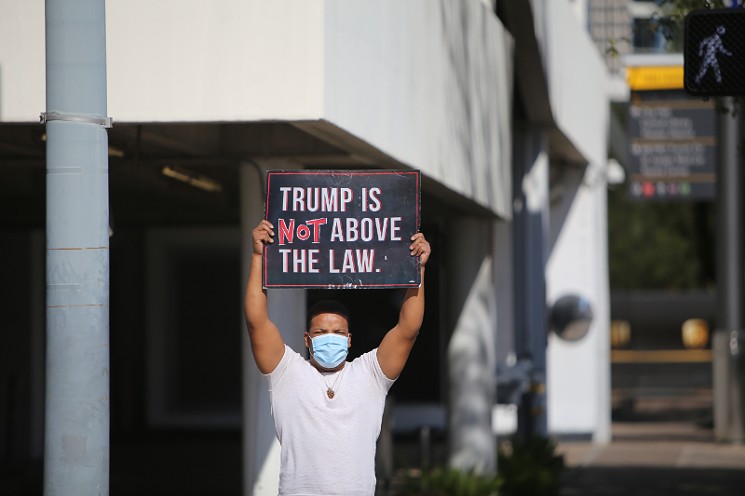 This protester demanded Trump be held accountable.
Photo by Doogie Roux
Cruz organized a plan for he and 11 other Republican senators to join with far-right Republican House members to object to officially counting electoral votes from several battleground states — Arizona, Georgia and Pennsylvania — that voted for Biden. He called for those states to be investigated in an unprecedented “emergency 10-day audit” which would give their Republican-run legislatures the chance to swap their pro-Biden electoral votes to Trump.

Several of the other right-wing diehards in the Senate walked back their objections after Wednesday’s horrific events and ultimately approved Biden’s win. But Cruz, unashamed and undaunted, still voted against certifying the Electoral College votes after Wednesday’s carnage.

The plot was doomed to fail from the start because the objectors didn’t have close to enough support from their colleagues in either the House or Senate to reach a majority. In Cruz’s case, it felt like a particularly cynical attempt to curry favor with Trump’s devoted base, whom many observers believe he’s trying to court ahead of another run for President down the line. 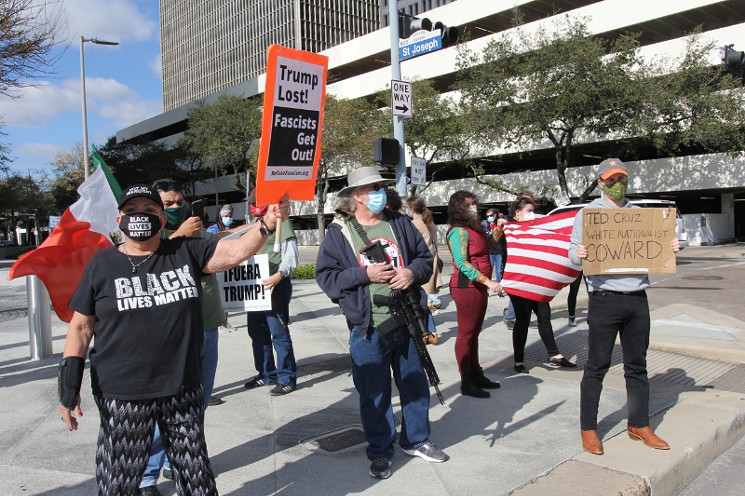 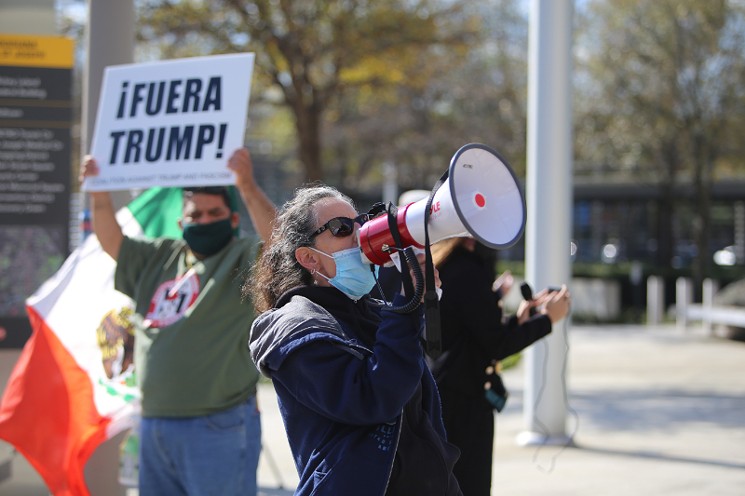 A woman took to the bullhorn in front of the Mickey Leland Federal Building Thursday.
Photo by Doogie Roux
In the wee hours of Thursday morning, just before the reconvened Congress finally certified Biden’s victory once and for all, Cruz put out a statement declaring that even though “The attack at the Capitol was a despicable act of terrorism and a shocking assault on our democratic system,” he still had no regrets for his role in the public effort to discredit Biden’s win. 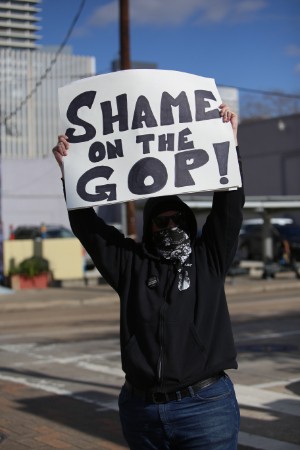 This activist had no love for the Grand Ol' Party.
Photo by Doogie Roux
“Millions of Americans who have peacefully expressed their deep concerns regarding election integrity deserve to have their voices heard. It was the right thing to do,” Cruz wrote, without mentioning that the main reason millions of people have those unfounded concerns in the first place was due to Trump’s refusal to admit defeat, which was loudly egged-on by Cruz the whole way through.

“Sen. Cruz, you must accept responsibility for how your craven, self-serving actions contributed to the deaths of four people yesterday. And how you fundraised off this riot,” Ocasio-Cortez said, referring to an automated Cruz donation text message blasted to his supporters during Wednesday’s chaos.

“Both you and Senator Hawley must resign. If you do not, the Senate should move for your expulsion,” she continued.

Cruz wasn’t having any of it — “You are a liar,” he tweeted in response. “Leading a debate in the Senate on ensuring election integrity is doing our jobs, and it’s in no way responsible for the despicable terrorists who attacked the Capitol yesterday. And sorry, I ain’t going anywhere,” he wrote. 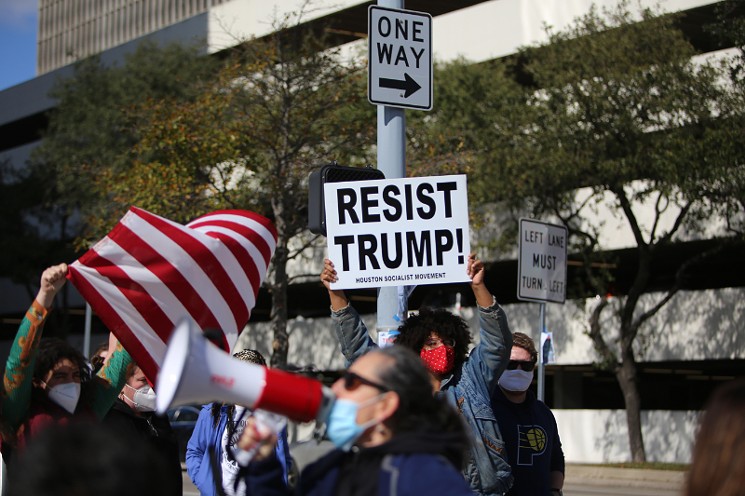 Less than two weeks of Trump's presidency are left,.
Photo by Doogie Roux
click to enlarge

In front of City Hall, this demonstrator called for no more compromise with Trump and his supporters.
Photo by Doogie Roux
Neither Houston Mayor Sylvester Turner nor Houston Police Chief Art Acevedo seemed to buy what Cruz was selling either. “Shame on you,” Acevedo tweeted Wednesday, writing that Cruz “fanned the flames of mistrust and history will hold you accountable for the ensuing chaos.”

“Texans should hold Sen. Ted Cruz accountable for this fiasco,” Turner posted during the riot.

“Texas Democrats call on Ted Cruz to resign from office immediately. Cruz’s actions have undermined our democracy, inspired treasonous, seditious acts, and brought shame to Texas,” Hinojosa said. “The tragic results of his actions will reverberate for generations By leading the objection to the Electoral College certification, all the while knowing the devastating consequences, he has demonstrated he is not fit to serve in the U.S. Senate.”


.@tedcruz should resign from the United States Senate immediately. https://t.co/O1D5K6Gt0k


Cruz’s former rival Beto O’Rourke also came at his old opponent via Twitter on Wednesday afternoon. In a reply to a Cruz tweet about how “Violence is always unacceptable,” O’Rourke snapped back “It is your self serving attempt at sedition that has helped to inspire these terrorists and their attempted coup.”

Cruz responded by telling O’Rourke to “Stop stoking division. Stop spreading hatred,” and to “stop showing contempt for the half of the country that disagrees with you.”
KEEP THE HOUSTON PRESS FREE... Since we started the Houston Press, it has been defined as the free, independent voice of Houston, and we'd like to keep it that way. With local media under siege, it's more important than ever for us to rally support behind funding our local journalism. You can help by participating in our "I Support" program, allowing us to keep offering readers access to our incisive coverage of local news, food and culture with no paywalls.
Make a one-time donation today for as little as $1.