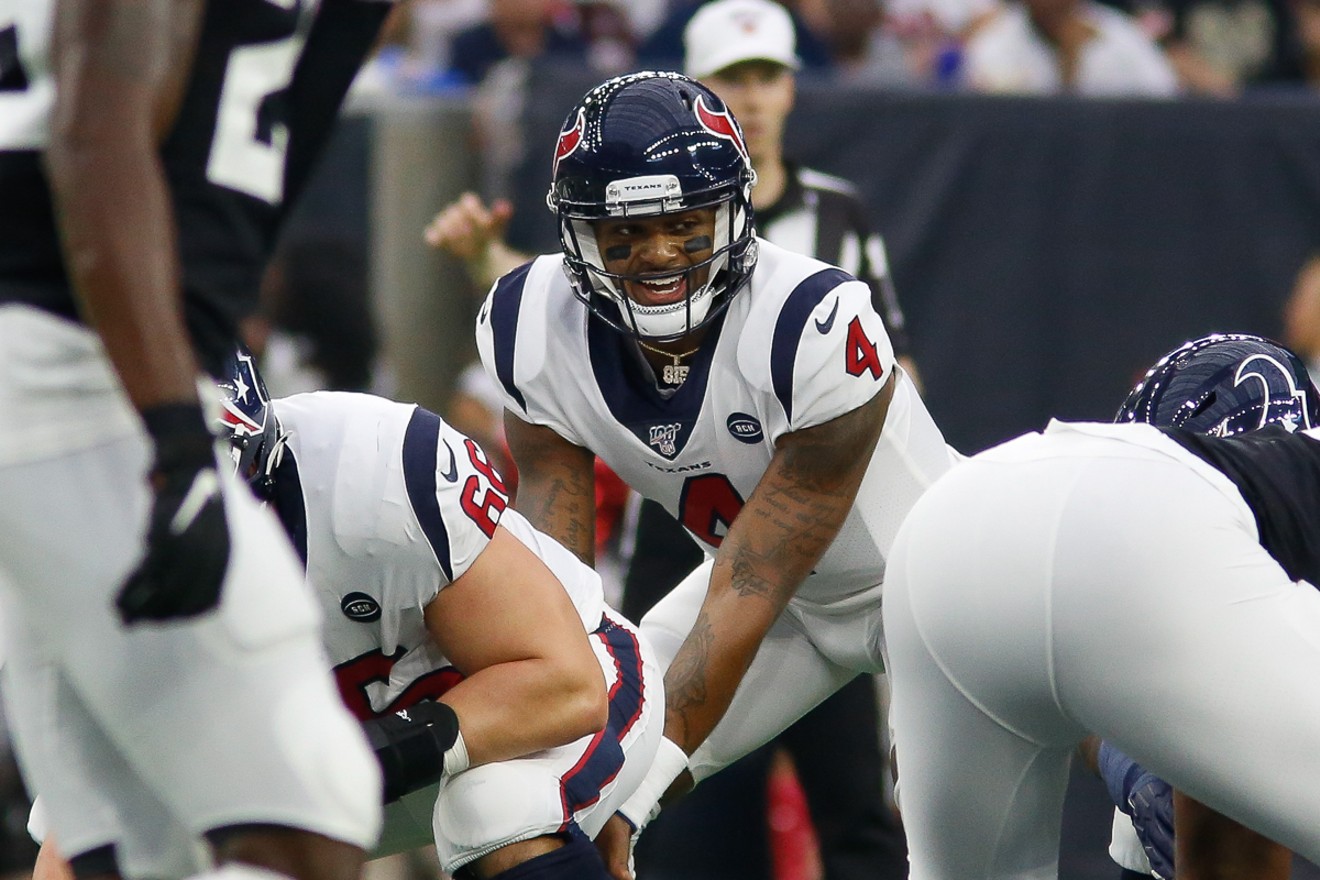 Saturday was a very busy day, if you're a Houston Texan fan, or anybody who is part of Deshaun Watson's family tree or inner circle. We could see the figurative smoke coming from NRG Stadium on a Watson contract extension on Thursday, when the NFL Network's Ian Rapoport tweeted this:


The #Texans are working hard with QB Deshaun Watson on a new extension, sources say, and my understanding is it’s likely to be more in line with Russell Wilson’s or Aaron Rodgers’ deal as opposed to that of #Chiefs QB Patrick Mahomes.


Then on Saturday morning, we got this very thinly veiled sign from Deshaun that good things were happening:


Then came the news:


Texans have agreed on a 4-year extension with Deshaun Watson averaging $39 million a year with a $27 million signing bonus. Details to come on on https://t.co/mIDjcbdCLC

So it's a four year extension ($156 million in new money with $11 million guaranteed) on the two years that already remained on Watson's deal, so he is tied to the Texans through the end of the 2025 season. Truth be told, if things go as well as both sides hope, there will be another extension done long before 2025. That's how things go in the NFL. Any way you slice it, this is great news for Texan fans, and a well deserved reward for one of the bright, young, shining stars in the NFL.

Some quick hit thoughts on this monumental bit of Texans news:

Good deal for both sides
As Rapoport pointed out on Thursday, the template for Watson's deal was never going to be the 10 year, nearly half a BILLION dollar deal that Patrick Mahomes signed earlier this summer. That deal was unique, and honestly cedes quite a bit of control to the Chiefs. The four year extension Watson is signing is a logical bump up in annual salary and guaranteed money from Russell Wilson and Aaron Rodgers, and it allows Watson to hit the jackpot again by age 30, at the latest. On the Texans end of things, they now have their franchise quarterback, a true superstar, locked up through 2025 at a rate that was only going to increase had they waited to pay him.

Good day for Bill O'Brien
From purely a perception standpoint, this was tremendous news for Bill O'Brien, who has had a turbulent offseason as general manager of this team, to say the least. This should put to bed any lingering questions over what Watson thinks of the direction of the team, and what he thinks about O'Brien. Watson is "in" on the culture that O'Brien and EVP of Football Operations Jack Easterby are building. This crosses off the final to-do on their list before the start fo the 2020 season, aside from cutting the roster down to 53 and assembling the 16-man practice squad.

This WILL make roster building in future seasons more challenging, though
When it comes to the salary cap numbers on this deal, there is good news and somewhat challenging news. Before we get to those observations, here are the numbers year by year, for Watson's six years under contract, 2020 through 2025, respectively:

The good news is that for this season and next season, the numbers are very friendly to the team. Next season, 2021, in particular, is crucial for Watson to have a cap friendly deal, because the salary cap is expected to DECREASE for the first time in history, due to the inevitable drop in revenue caused by the coronavirus and attendance in stadiums being reduced or eliminated altogether. The challenging part for O'Brien will come in years 2022 through 2025, when they will need to rely more on young players on rookie deals and ring chasing veterans to fill out the roster. It will be tough to just reward guys who aren't Pro Bowlers AS IF THEY ARE Pro Bowlers. Nick Martin, Whitney Mercilus, and Zach Cunningham are all guys who got paid near the top of their position group, and each has yet to make a Pro Bowl.

How must some other fan bases feel seeing this news?
Think of the teams that had a shot at making Deshaun Watson (or Mahomes, for that matter) their franchise quarterback. How do you feel, if you're a Bears fan reading this Watson news, just one day after the Bears determined that Trubisky would indeed start Week 1 for them. In other words, you used the second overall pick in the draft (traded up for it, actually) to get a guy who was in a battle for his position in Year 4. Watson went ten picks later. How about Jags fans (all nine of them)? Your team just CUT the running back they used the fourth overall pick on in 2017, eight selections before Watson. How about the Browns, who traded the pick to the Texans that they used to draft Watson? How's Baker Mayfield treating ya, Cleveland?


Listen to Sean Pendergast on SportsRadio 610 from 6 a.m. to 10 a.m. weekdays. Also, follow him on Twitter at twitter.com/SeanTPendergast and like him on Facebook at facebook.com/SeanTPendergast.
KEEP THE HOUSTON PRESS FREE... Since we started the Houston Press, it has been defined as the free, independent voice of Houston, and we'd like to keep it that way. With local media under siege, it's more important than ever for us to rally support behind funding our local journalism. You can help by participating in our "I Support" program, allowing us to keep offering readers access to our incisive coverage of local news, food and culture with no paywalls.
Make a one-time donation today for as little as $1.