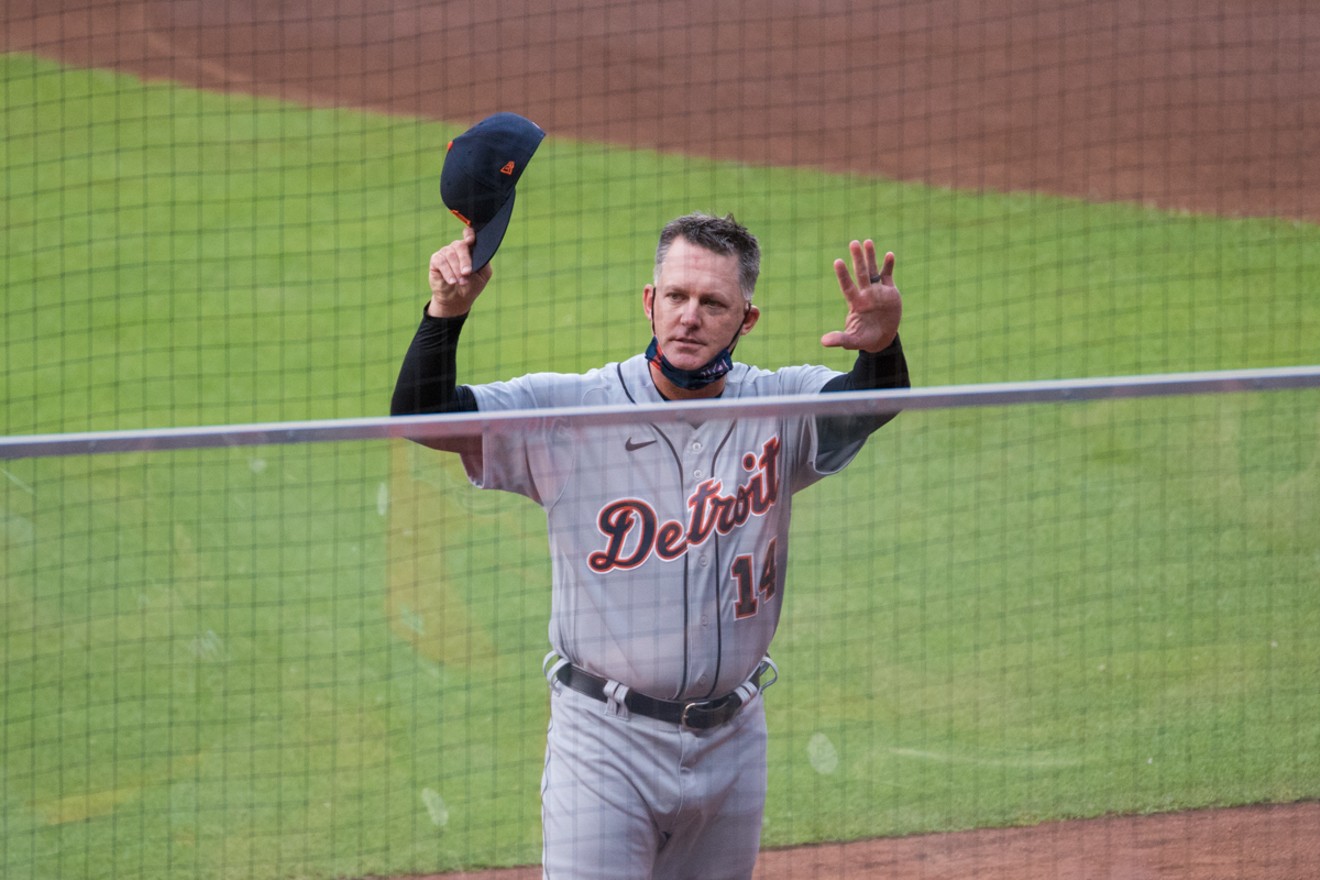 A.J. Hinch waves to Astros fans before his first game back in Houston as the manager of the Tigers. Photo by Jack Gorman
Cheating sucks. There, we said it. In fact, we've said it plenty of times before in this space. What the Astros did back in 2017 on their way to the first World Series win in Houston history was an embarrassment. Period. Full stop.

But, when A.J. Hinch returned to Minute Maid Park on Monday night, back in front of Astros fans for the first time since his firing here and hiring by the Detroit Tigers, he got a standing ovation. The fans roared loudly holding signs for their former manager and showing him a ton of love.

We all know what the Astros did. Definitively, they cheated by spying on pitchers and banging on trash cans. It helped them win games. We also know that, of virtually everyone involved, Hinch has been the most contrite. Owner Jim Crane did what was necessary to try and erase some of the stain of that legacy, which included firing Hinch and GM Jeff Luhnow. When he did, like any good leader, Hinch was apologetic without reservation.

Compare that to Luhnow, who not only denied every taking part in any of the activities that got him fired but sued the Astros, a case that was ultimately dismissed after he and the ballclub agreed to some kind of settlement that was not disclosed.

Hinch did no such thing. Even now, he continues to express regret for his part in the mess. "I do believe that we did some good things in Houston," Hinch said before the Tigers series. "And I do believe we were wrong in the behavior and the decisions that we made in 2017. It’s hard to have that cloud over the sport and be responsible for that and be the man that was the manager, that it happened on my watch. My relationship with that time is complicated. It’s very personal. It’s something that I take very seriously. I will continue to apologize, not only to the Houston fans but all the fans around baseball, and continue to repeat how wrong it was."

Counter that with Luhnow who told KRPC in October 2020, "It’s hard to prove that you didn’t know something, it’s proving a negative. But the investigation interviewed dozens and dozens of people; players, video staff members, coaches, etc. None of them said that I knew. The investigation looked at emails, text messages, slack messages, tens of thousands of messages from different people. I handed over my phone to the MLB investigators. They went through all of my messages, and everything on my phone. I provided to the investigators several pieces of evidence that they used in the investigation. Unfortunately they turned some of those back around and tried to implicate me and say that I might have known."

Note that the guy with the job is the one who came clean.

It's easy to root for Hinch as well. He's humble, talented and whip smart. He's the type of person who, when he speaks, sounds like he is constantly leveling with you, trying to help the person listening understand not just the how but the why. It's a unique quality in sports where coaches are often short with media or dismissive or even outright hostile.

No doubt many fans at Minute Maid this week would be completely fine if Hinch put on an Astros uni and climbed into the home dugout to start managing again. Whatever his sins in the past, he has atoned for them and suffered the punishment for them.

Going forward, we can hopefully just remember him as the man that skippered the first baseball championship team in Houston history.

He deserves as much.
KEEP THE HOUSTON PRESS FREE... Since we started the Houston Press, it has been defined as the free, independent voice of Houston, and we'd like to keep it that way. With local media under siege, it's more important than ever for us to rally support behind funding our local journalism. You can help by participating in our "I Support" program, allowing us to keep offering readers access to our incisive coverage of local news, food and culture with no paywalls.
Make a one-time donation today for as little as $1.