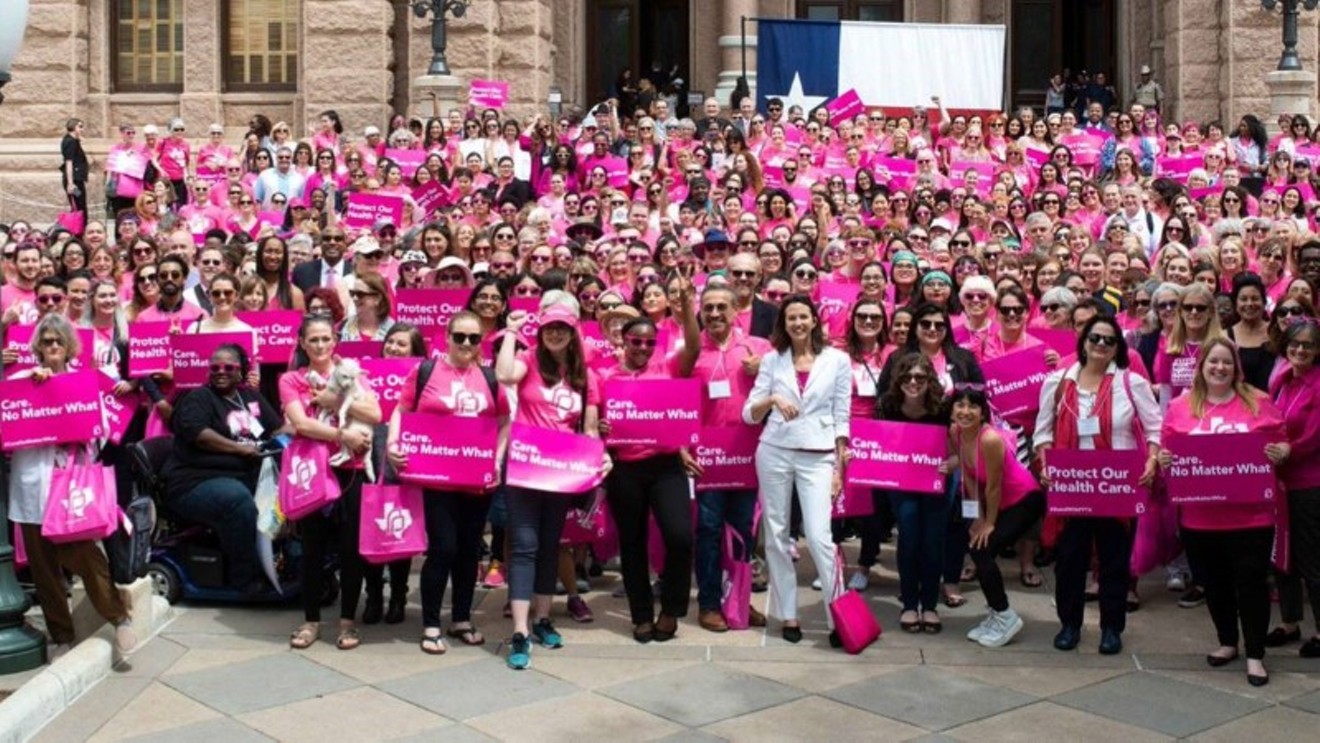 Texan abortion advocates protested in 2019 against the Legislature's ban on the D&E abortion technique, which was struck down Tuesday. Photo by Planned Parenthood Gulf Coast
On Tuesday night, Texan abortion rights advocates celebrated a new ruling from the U.S. Fifth Circuit Court of Appeals that finally struck down State Bill 8, the Texas Legislature’s attempt to ban the most common form of abortion used after 15 weeks of pregnancy.

“My immediate reaction to yesterday’s Fifth Circuit ruling was relief for my patients,” said Dr. Bhavik Kumar, an abortion care provider with Planned Parenthood Center for Choice in Houston. “As an abortion provider in Texas, I’m all too familiar with politically motivated laws like this one that are designed to restrict abortion until it’s completely out of reach.”

The procedure — dilation and evacuation, also called D&E — was the focus of SB8 which was passed by the state Legislature back in June of 2017. That law outlawed the D&E procedure in Texas, but a federal district court ruling in August of 2017 blocked the ban from being enacted just one day before it was set to go into effect in response to a lawsuit from abortion providers Whole Woman’s Health and Planned Parenthood.

Texas Attorney General Ken Paxton then filed an appeal with the Fifth Circuit, which put the case on hold for months as it awaited the U.S. Supreme Court’s decision in June Medical Services v. Russo, the case where the nation’s highest court overturned a law that would have closed most abortion providers in Louisiana.

The Supreme Court finally ruled in favor of abortion providers in that case in June of this year, which got the ball rolling again on the Fifth Circuit case that was decided Tuesday night.

In a statement issued Tuesday, Planned Parenthood president Alexis McGill Johnson said that the Fifth Circuit’s ruling was “a clear message to Gov. Abbott and AG Paxton that they will not be able to succeed in their cruel crusade to ban abortion.”

SB8 sensationalized D&E abortion by referring to it as “dismemberment abortion,” and required abortion providers to first cause “fetal demise” through either injecting chemicals or cutting the umbilical cord in utero before an abortion can be carried out, an additional step that the Fifth Circuit ruled provides no medical benefit to patients seeking abortions.

Fifth Circuit Judge James Dennis wrote in the court’s opinion that the Texas Legislature’s attempt to ban D&E abortion “unduly burdens a woman’s constitutionally-protected right to obtain a pre-viability abortion” because it “forces abortion providers to act contrary to their medical judgment and the best interest of their patient by conducting a medical procedure that delivers no benefit to the woman.”

Around 11 percent of abortions in the U.S. happen after the first trimester, and the D&E procedure is used in approximately 95 percent of those cases, according to the Guttmacher Institute, a policy think tank that focuses on reproductive rights issues.

“Outlawing the safest and most common method of abortion at this stage of pregnancy would have put my patients’ health and well-being in jeopardy and criminalized physicians like myself for using our best medical judgment, training and expertise,” Kumar said. “My patients and I know what’s best for them, not politicians.”
KEEP THE HOUSTON PRESS FREE... Since we started the Houston Press, it has been defined as the free, independent voice of Houston, and we'd like to keep it that way. With local media under siege, it's more important than ever for us to rally support behind funding our local journalism. You can help by participating in our "I Support" program, allowing us to keep offering readers access to our incisive coverage of local news, food and culture with no paywalls.
Make a one-time donation today for as little as $1.