Houston By the Neighborhood: Welcome (Again) to Riverside 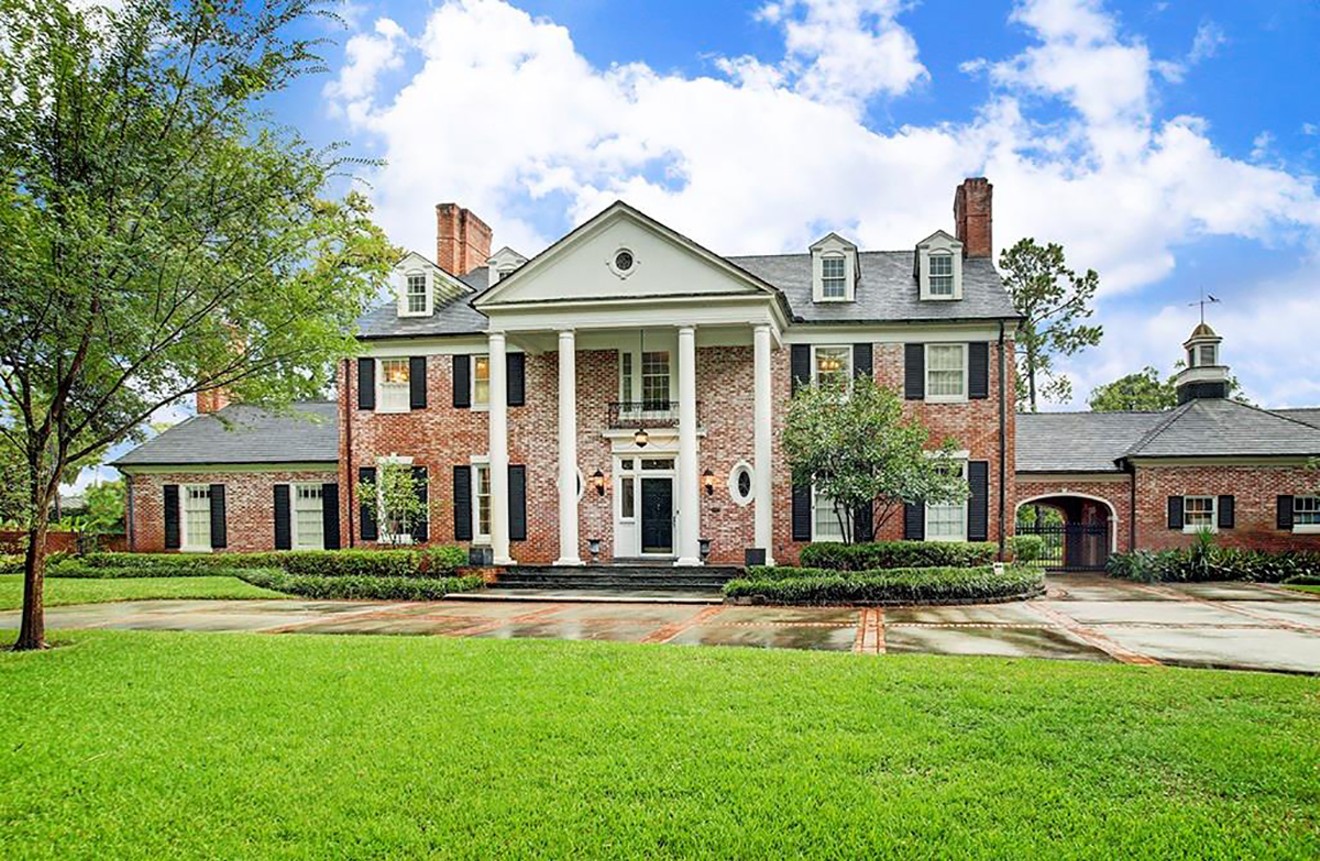 William M. Wheless IV of Wheless Realty has the listing for 3418 South Parkwood in Riverside Terrace. Photo by TK Images
Everything old becomes new again, especially when it comes to real estate. As the Houston metropolitan area grows like The Blob, and our commutes get longer and longer, we begin to view once overlooked areas through rose-colored glasses.

And so it goes for the Riverside market area, those historic neighborhoods north of Old Spanish Trail and east of Highway 288, with streets running along Brays Bayou and North MacGregor Way. 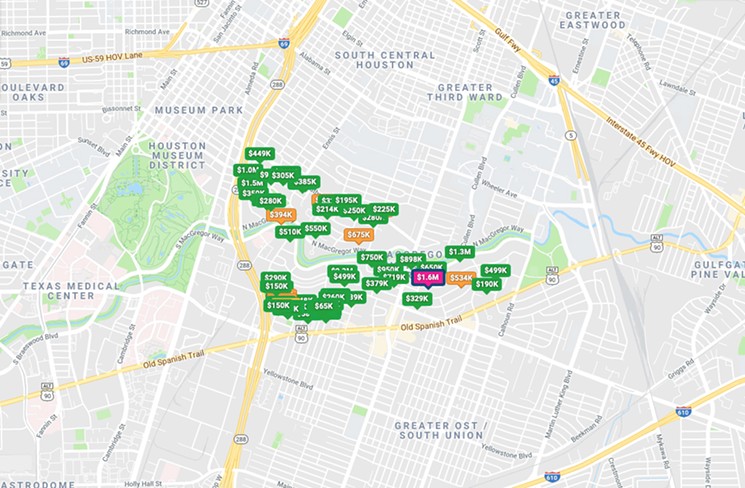 The Riverside market area in map view from HAR.com.
Screenshot from HAR.com
Riverside Terrace, especially, was known as the Jewish River Oaks from the 1930s until around the 1950s, with stunning architecture by John Chase, John Staub, Birdsall Briscoe and Bolton & Barnstone. While several of the mansions have been designated as historic landmarks, others succumbed to the widening of 288. By the 1960s and '70s the neighborhood had seen its fair share of real estate blockbusting, white flight, the acquisition of property by affluent African-Americans and even the use of dynamite. The race, religion and socioeconomics of the neighborhood during that era were covered in Jon Schwarz's 1987 documentary, This Is Our Home, It Is Not for Sale.

Today the Riverside market area is an eclectic mix of property and valuations. There are more than 20 lots cleared for development, ranging in value from $1.55 million for a double lot on Riverside Drive and as affordable as $65,000 for a lot on Illinois Street.

There also are about 20 of those vintage homes currently on the market, ranging from an updated five bedroom built in 1930 to a remodeled four bedroom from 1959. 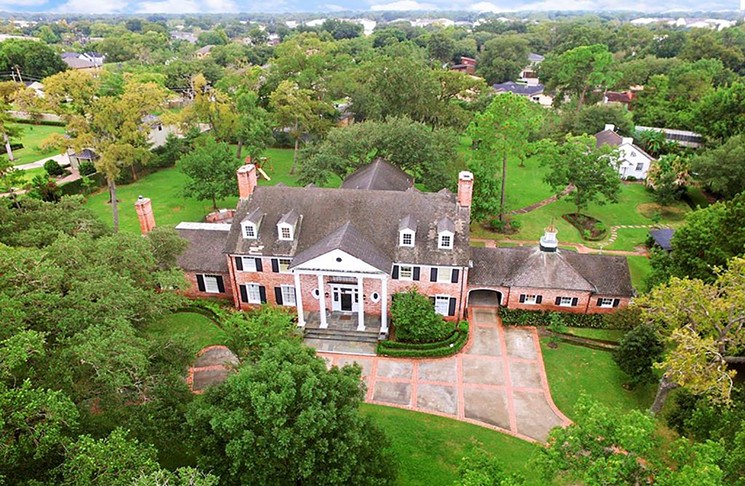 This magnificent estate at 3418 South Parkwood has been listed by William M. Wheless IV.
Photo by TK Images
But the jewel in the crown has to be Southern Colonial estate at 3418 South Parkwood. Mature trees, manicured gardens, a circular drive and balanced wings welcome guests. Built in 1938 and designed by architect Henry A. Stubee, the home — formerly known as the Kurth House — features a barrel ceiling living room, geometric balustrades on the winding staircase, pediments, and a paneled study. There's room for everybody here, with a basement playroom, a large third floor, and a separate guest house.

William M. Wheless IV of Wheless Realty has listed the property at 3418 South Parkwood for $2.375 million. and tells us, "This is truly one of the last great estates in Houston and a true bargain compared to other estates this size around town."

In preparation for the 1992 AIA Houston Home Tour, James D. Wofford, Jr., AIA wrote about the property and its origins, noting that it was the first home to be constructed in Riverside Terrace and believed to be one of the first homes with central air conditioning with supply and return air in each room.


Wheless goes on to tell us that the property at 3418 South Parkwood is unique in its proximity to downtown and the Texas Medical Center, and says homebuilders are starting to snatch up properties in the area. Of the almost 75 properties listed on the market today, 25 of them were constructed in 2018-2019. 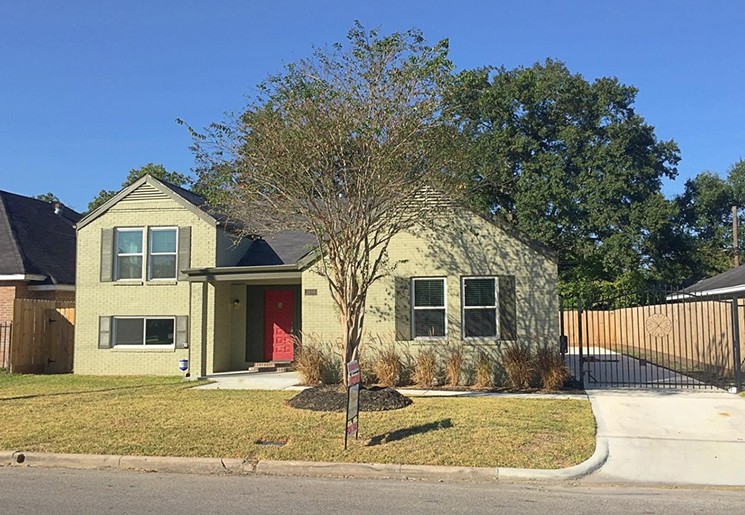 Tirey "Ty" Counts of Monarch Real Estate Group has the listing for 3459 Tampa Street.
Photo by Tirey "Ty" Counts
But what if you can't afford a historic estate home but you like the idea of living close to the Museum District and the Texas Medical Center? That's where transformative magicians like Tirey "Ty" Counts come in. He's already been successful flipping a nearby home on Odin Court and is now listing a home at 3459 Tampa Street that has gone from awkward caterpillar to beautiful butterfly.

Counts tells us that, when he bought the home in 2014 it had been abandoned and had a water leak in the middle that ran for two years. "It was the 'everything wrong' house," says Counts, who ripped it all out before rehabbing the house in a year-long process. He rented it out for three years, waiting for the market to turn, and has just listed it for $358,000.

Through lots of sweat equity and a talented contractor he found on Yelp, Counts dug out 17 truckloads of dirt to create the recommended 18 inches of clearance under the pier and beam construction, replaced the sub floor and some beams, and installed all new electrical, plumbing, sheetrock, fixtures, appliances, granite counters and poured driveway.

"What makes it clever, over the master bedroom we cut out the attic to give the master bedroom a 17 foot vaulted ceiling which turned out great, super impressive," says Counts, who also created a separate apartment area with its own entrance for possible rental income.

"I really believe in the neighborhood. I saw something five years ago starting to happen, it was probably happening before then. For a family that needs a four bedroom inside the Loop and doesn’t have half a million, come on the other side of 288 and really see the city is expanding into that neighborhood. It's very exciting.

"I would buy another house in this neighborhood to flip because I feel it’s on the way up," adds Counts. "If someone wants to spend under $400,000 for a single family home and doesn't want to be in a townhouse, then you have to think outside the West U, Montrose, River Oaks, Heights boxes."

And yes, since we know you'd want to know, there's an H-E-B nearby at Old Spanish Trail and Scott.

To view more homes for sale in the Riverside market area, visit har.com.

Visit the MacGregor Area Community Development Corporation for information about its revitalization efforts for the geographical area they describe as the Riverside District; learn more at riversidedistricthouston.com/overview.
KEEP THE HOUSTON PRESS FREE... Since we started the Houston Press, it has been defined as the free, independent voice of Houston, and we'd like to keep it that way. With local media under siege, it's more important than ever for us to rally support behind funding our local journalism. You can help by participating in our "I Support" program, allowing us to keep offering readers access to our incisive coverage of local news, food and culture with no paywalls.
Make a one-time donation today for as little as $1.